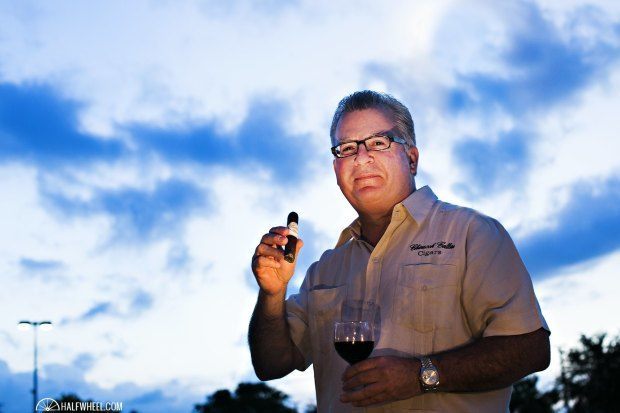 There are a lot of cigar brand owners who enjoy wine. Many of them have seen their love of grapes spill over into the names of cigars, though no one has taken it quite as far as Brian Chinnock, owner of Chinnock Cellars Cigars. For Chinnock, wine is not just a passion or hobby, it’s his other business—Chinnock Cellars, the  winery that bears his name. That business is located in Napa, California, while his cigars are rolled across the country at Miami’s El Titan de Bronze. As is so often the case with Chinnock, we managed to find him with a cigar in one hand and a glass of wine in the other. This portrait was taken using a Canon 5D Mark III and a 50mm f/1.2 lens set at f/4.5. The shutter speed was 1/90 second at ISO 800. There were two main sources of light: ambient natural light from the sun behind the frame and two hand held video lights to compensate for the backlight from the setting sun. The photograph was color corrected in Adobe Lightroom and adjusted for color, contrast and sharpness using custom actions in Adobe Photoshop CS6.