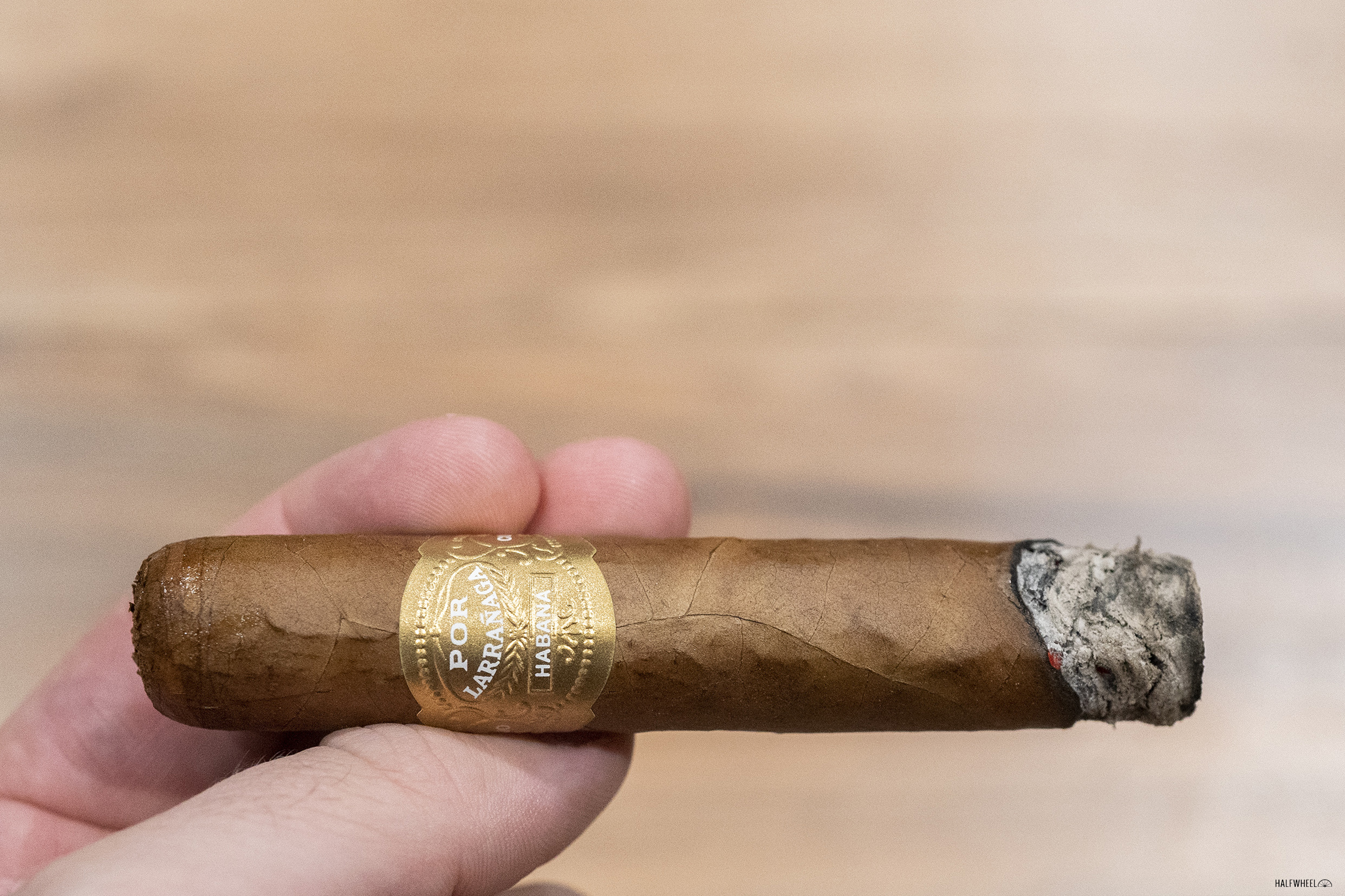 If there’s been one fairly common topic in my recent conversations about what Habanos S.A. has been releasing, it’s that the new cigars all seem to be limited and expensive. That is certainly true, but it does not mean that the Cuban cigar company has been ignoring its regular production portfolio, even for some of its more minor brands.

Case in point, in March 2021 a new vitola for the Por Larrañaga marca began showing up, a robusto named the Galanes.

The release of the Por Larrañaga Galanes also marked the addition of a new vitola in the Habanos S.A. portfolio, with the Galanes measuring 4 3/4 inches (120mm) long and has a 52 ring gauge. For now its factory name will be an easy one to remember, as the vitola de salida is simply galanes. According to a press release from Habanos S.A., the vitola was selected in line with the current trend towards thicker cigars. 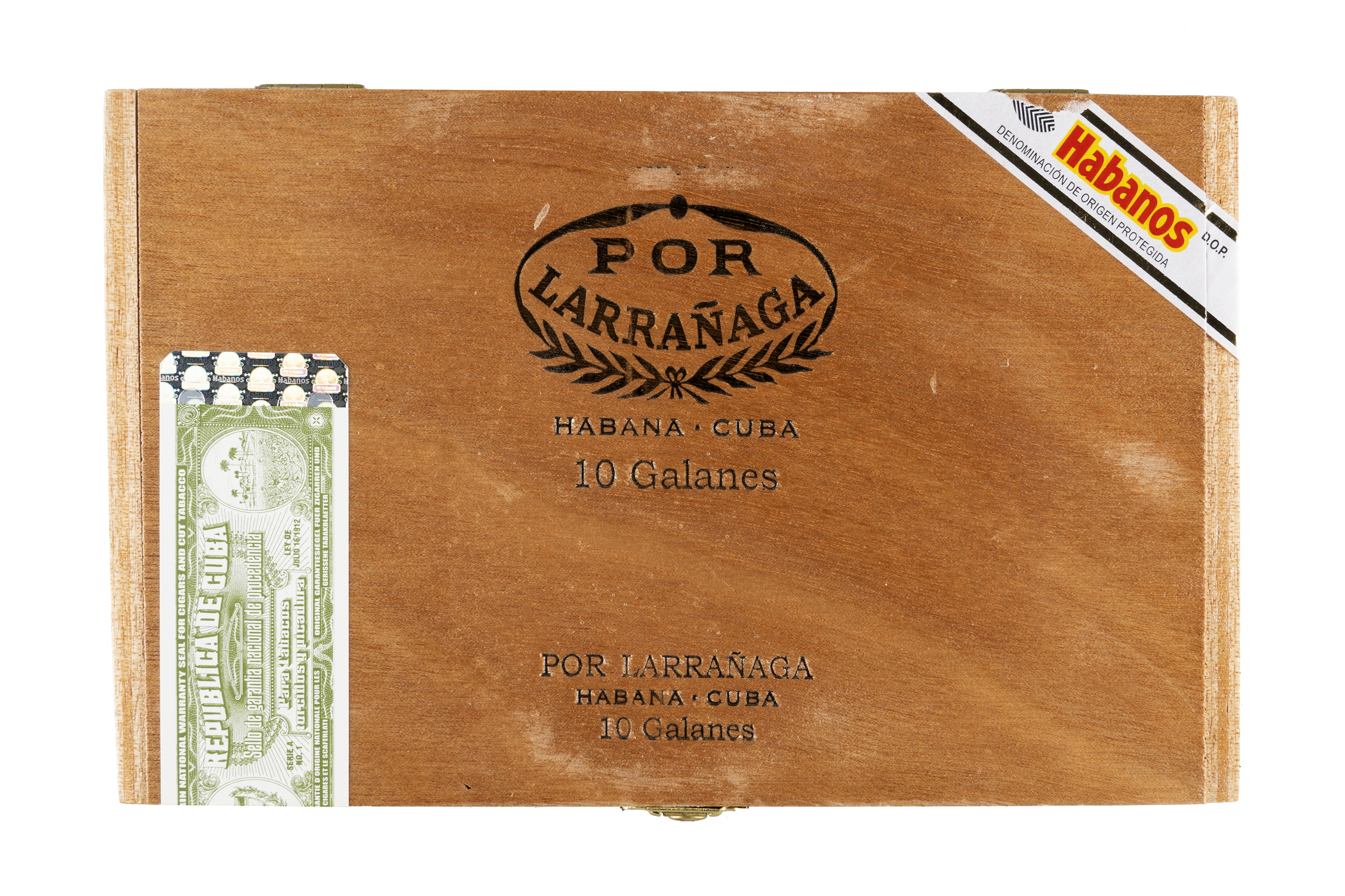 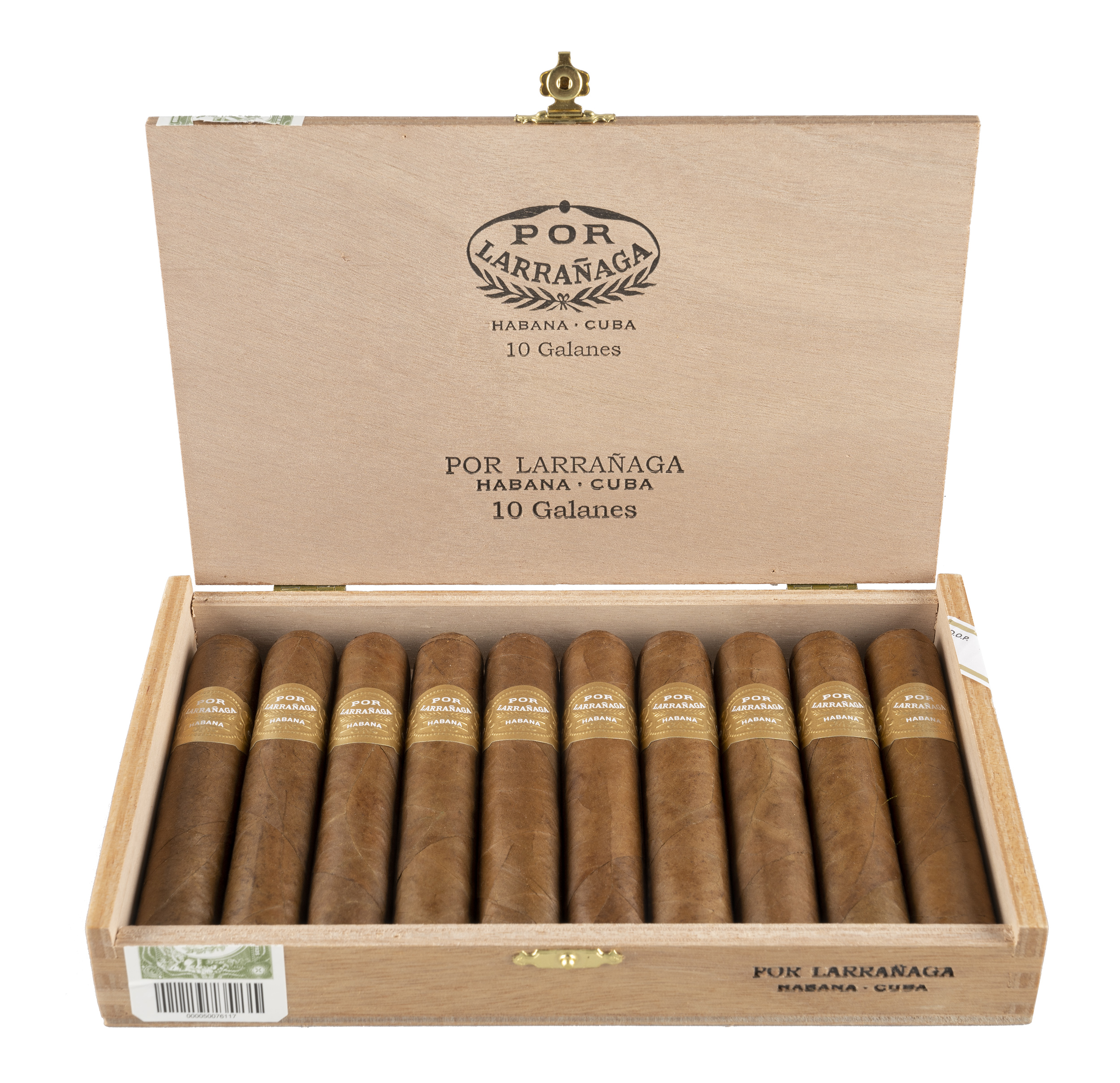 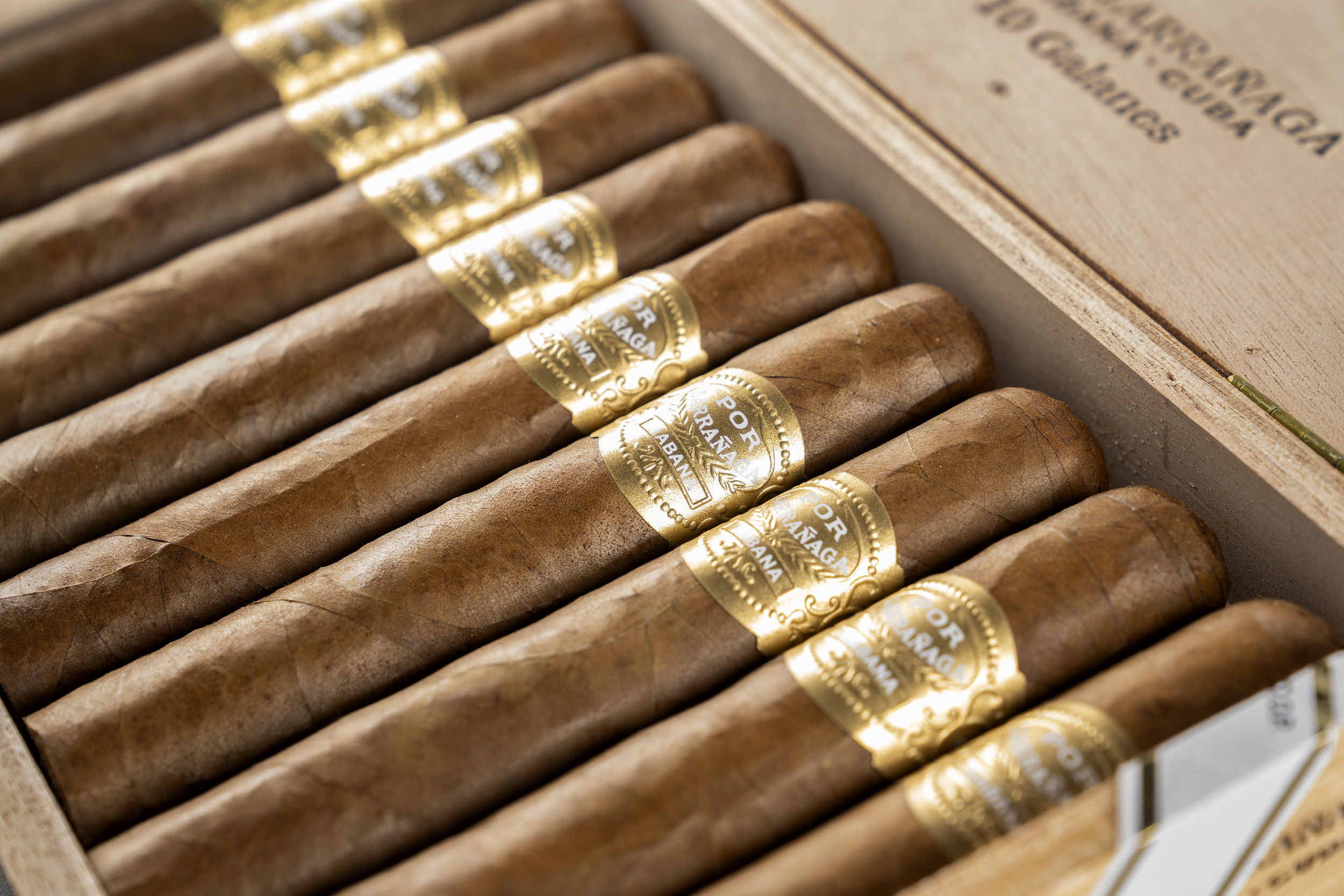 It is offered in 10-count semi boîte nature (SBN) boxes, meaning wood boxes with a clasp on the front. As with all Habanos S.A. releases, its retail price varies widely based on the country of sale. In the Middle East region, it sells for approximately $7.85 per cigar, while in Switzerland it is approximately $11.66. Then there is Hong Kong, where it is priced at HKD 268 per cigar, approximately $34.53 per cigar. 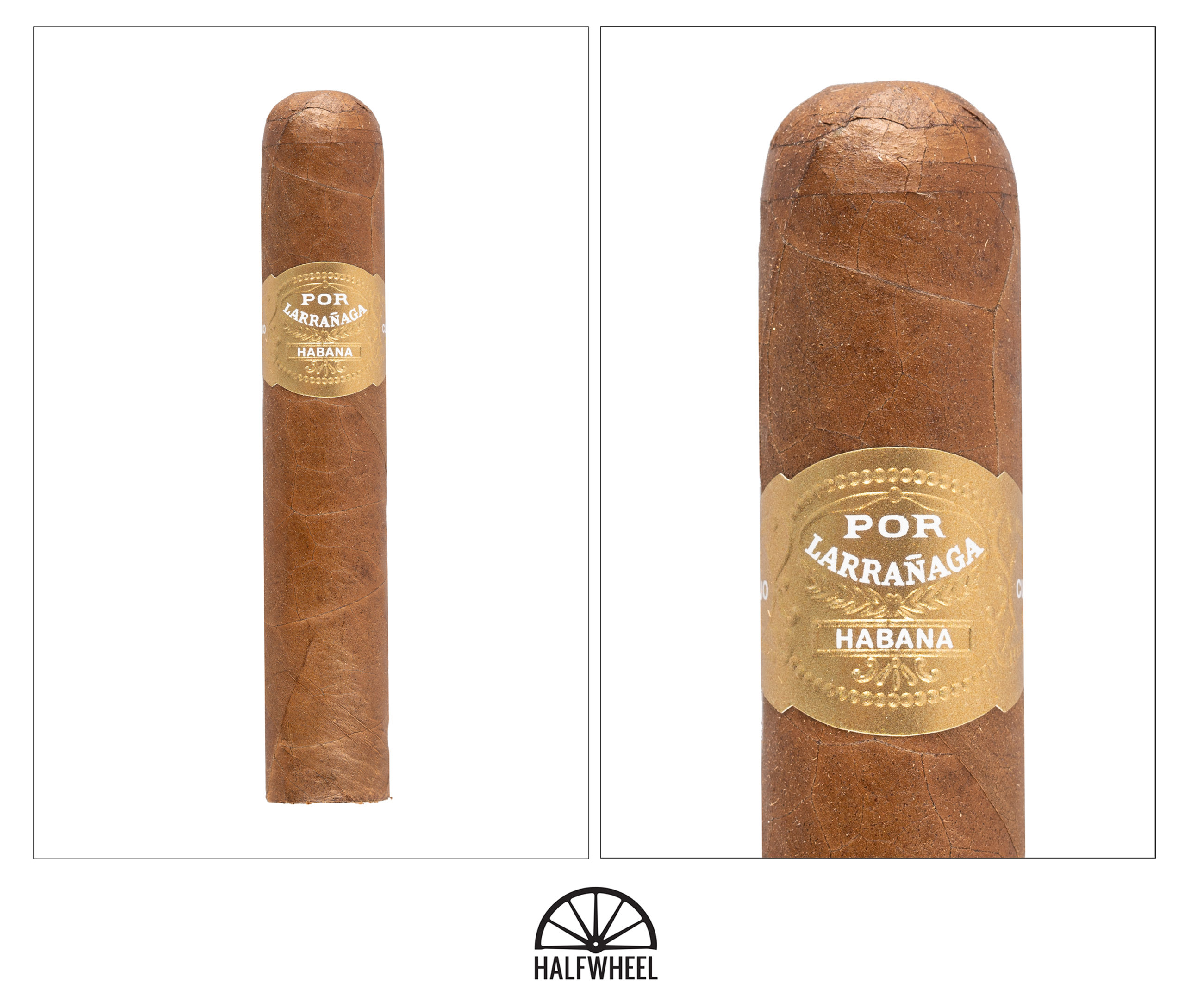 For what I generally think of as a milder cigar, the Por Larrañaga Galanes comes wrapped in a fairly well-tanned leaf, and given that the gold of the band is significantly lighter than the tobacco, it only furthers that impression. In the hand, the cigar feels like a very familiar robusto, and for the most part, it looks like one as well. I don’t notice the puckered veins that I have generally seen on other Cuban wrappers. The wrapper has a bit of an oily sheen for the eyes but feels on the dry side in the fingers. It’s rolled firmly and save for a slight angle at the head, which looks like an improperly applied toupee. The foot offers aromas of a very distinct note of cereal, almost the combination of every kind of cereal grain. It’s a generally dry smell, and while I could make the case for a bit of light wood and dry tobacco, the physical sensation takes precedence over those. There is a touch of cool, milky creaminess in one sample, but there’s no real pepper or sweetness in the aroma either. The cold draw ranges from a nearly ideal amount of firmness—just enough to feel the air move, but not enough to suspect obstruction—to a bit tight but again not obstructed, i.e. the cold, thick milkshake effect. The flavor has a bit of the cereal flavor but it is much tamer here, as well as wrapped in a bit of creaminess that reminds me of melted vanilla ice cream. Once again, there isn’t much in the way of pepper, spice or sweetness.

The Por Larrañaga Galanes starts off with the kind of mix of cereal and wood that the cold draw seemed to be alluding to, along with some dry tobacco, but there’s just a faint bit of white pepper that is there to bring all of those components together. There is less creaminess than I would have expected, which results in a more flavorful profile, if not one that suggests that there is a lot of nicotine strength to come. One sample has a chalky twinge to it, enough that it’s a tick behind the other two in terms of flavor in the early going. It’s a flavorful start that provides plenty of sensation and stimulation for the taste buds, yet the flavor still feels a bit tight and singular. As the first third comes to a close, there’s a bit more flavor, particularly the white pepper, which elicits a more of a physical sensation towards the back of the throat, though it isn’t irritating. The technical performance is generally good in all categories, though when the draw gets firm it does make each puff noticeably more labored. Flavor is surprisingly close to medium, body is medium-minus, and strength is mild.

A retrohale at the start of the second third reveals a bit of creaminess and a subdued white pepper. It’s not long after that a bit of black pepper develops in the flavor, and with it comes a bit of char and harshness, an interesting push and pull on my senses of smell and taste, not to mention the physical reaction of my taste buds. The flavor has stayed remarkably on track from where it started, meaning a decent amount of the cereal grain, hints of both white and black pepper, and a profile that feels like it’s trying to dry out my palate, even though I don’t notice a reduction in saliva. What has changed most noticeably is a reduction of the creaminess, which takes any sweetness it had down to almost zero, and the light but increasing char component. In the final puffs of this section, a bit of thick sweetness occasionally sneaks into the profile, somewhere between butterscotch and caramel, though it’s the textural sensation that is more noticeable than a sudden onslaught of sweetness. It’s also not consistent across the three samples, and the one where it is most noticeable yields the best result. Flavor is medium to medium-plus depending on how much pepper the particular sample has, body has stepped up to medium-plus, while strength has slowly crept out of the mild range but is well short of medium. 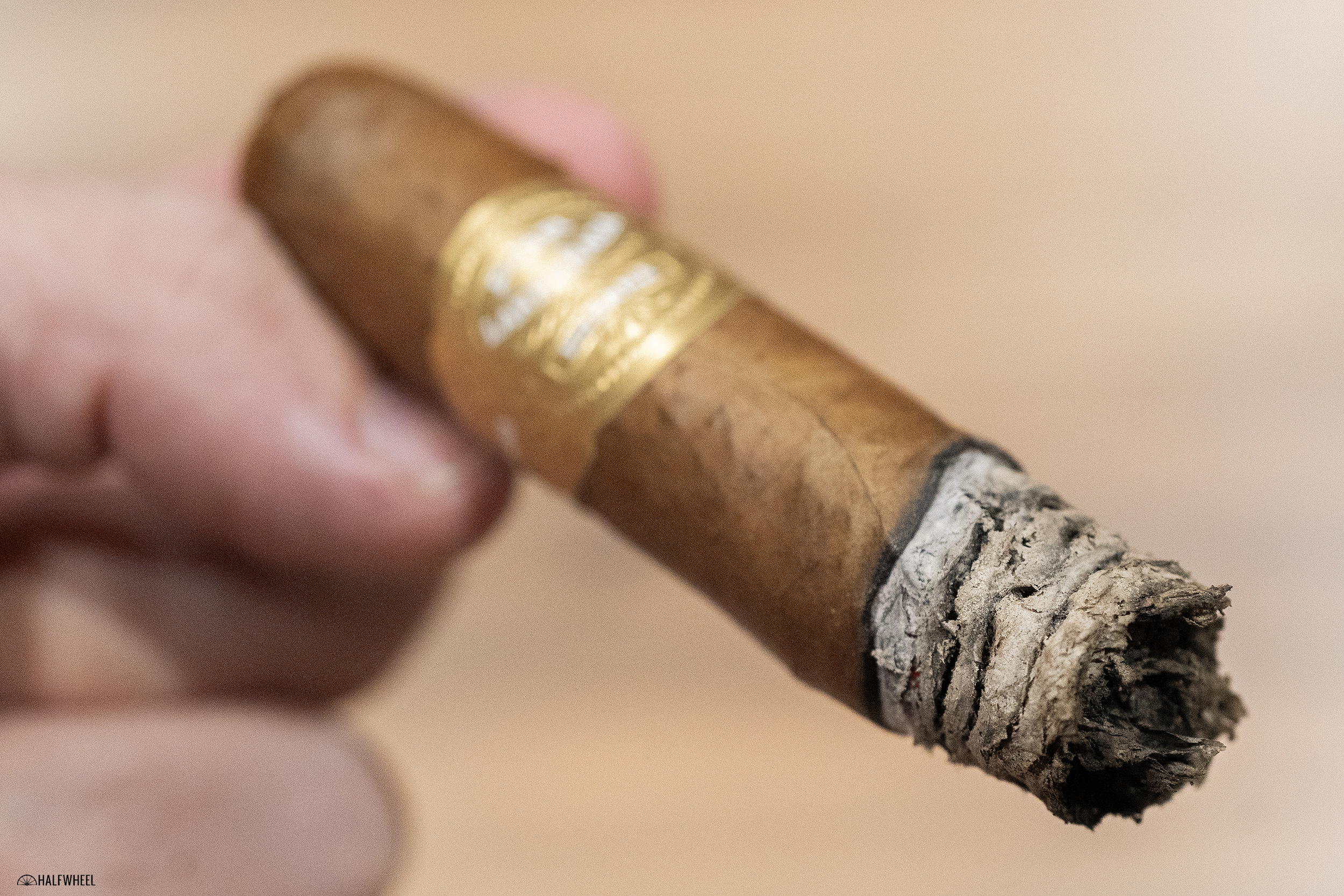 While there has been a slow but steady building of flavor intensity, the Por Larrañaga Galanes seems to have plateaued as there isn’t much more of a change to be found in the final third. There is a bit more consistent sensation of black pepper, which grates on the palate a bit but isn’t particularly irritating. The woodiness has pushed out the cereal grain, though the net effect isn’t drastic, as there is a fair amount of flavor consistency since the start of the cigar. Whatever return of sweetness there was towards the end of the second third is also gone, leaving a fairly dry, singular flavor that thoroughly tingles the taste buds but doesn’t offer much in the way of depth or complexity. It’s a decent flavor for a cigar out of a box with a date of only about six months ago, but it seems to have a lot of unfolding and blossoming to do. Construction remains outstanding with no problems whatsoever. Flavor finishes at medium-plus, body retreats to medium, and strength is mild-plus, just shy of medium range. The Por Larrañaga Galanes shows its relative youth, though it's more by way of the flavor being tight, linear and one-dimensional, which I have to believe isn’t at all what it will be capable of offering with a bit of time. It is certainly better than what I would consider the average profile of Cuban cigars at this stage of their aging curve, as the last time I smoked a number of off-the-shelf Cuban cigars, the experience left me quite disappointed. Whether these cigars will transform into what I hope they do will be a matter of time and patience, and while they’re decent now, I’m hopeful that with a bit of rest they will unfold and turn into a more complex and enjoyable smoking experience.