If there is one thing that seems to be consistent about Habanos S.A.’s Edición Regional releases, it’s that they are, with very little exception, never on time. And not just fashionably late, but where the heck are you? late.

In the case of the Por Larrañaga Coronas, an Edición Regional for the distributor 5ta Avenida, it was scheduled to be a 2017 release but didn’t show up until the middle of September 2018.

You may have noticed that this release is for a distributor and not a particular country. While a bit rarer, it does happen and is happening more and more in recent years. In this case, 5ta Avenida is based in Waldshut-Tiengen, Germany, and handles the retail and duty-free markets of Germany, Austria and Poland.

Both Germany and Austria have had their own Edición Regional releases, 11 for the former and one for the latter, but sometimes it makes more sense for a distributor to be able to cover its entire territory with a special release. Enter a cigar such as this, and it’s not the first time this has happened, but rather the fourth, and all in the past few years:

As you might infer from the name, this Por Larrañaga is a corona vitola, measuring 5 3/5 inches (142mm) long with a 42 ring gauge, a size that is shared with the Montecristo No.3, Romeo y Julieta Cedros de Luxe No.2 and the Quai d’Orsay Coronas Claro. It’s a size that is formally known as the coronas vitola in factories, or what is referred to as its vitola de galera.

It’s also a fitting size for the Por Larrañaga brand, which skews towards slender cigars in its regular production range, which currently offers three sizes:

It’s certainly not the most well-known or widely available brand in Habanos S.A.’s portfolio, but it does have its share of history as the line dates back to 1834. It has also been used 17 times for the Edición Regional program, two of which went to Germany: the Por Larrañaga Lonsdales in 2006 and the Por Larrañaga Robustos in 2010.

In keeping with the theme of a cigar in a classic size, the Por Larrañaga Coronas come in 50-count cabinet boxes, which are considered a classic packaging format that is ideal for again. A total of 1,600 boxes produced, with individual cigars offered at €10.20 ($11.86) each, a fairly significant markup over the Petit Coronas, which are half an inch shorter and retail for €6.70 per cigar. As would be expected from a cigar named Coronas, this Por Larrañaga lives up to it name. It’s a slender vitola presented in a lightly tanned shade that is reminiscent of butterscotch or kettle corn. The shade wrapper is highlighted by the gold primary band and the lighter colors of the secondary Edición Regional band, making for a very light, almost glowing visual appearance. Veins are fairly sparse in terms of quantity, though the backside of certain cigars reveal the hiding place of the larger ones. It’s a fairly firmly rolled cigar, with none of the sponginess that I had been associating with Cuban cigars in recent years, instead, feeling as well-packed as any of its competitors from other cigar-producing countries. The foot has a very light and subtle aroma of breads and cereal grains, the latter just shy of being reminiscent of a freshly opened box of Cheerios, with one cigar showing the kind of citrus and salt brightness found in a traditional gose-style beer. The cold draws on all three samples are quite firm, almost a struggle to get good airflow through the cylinder. Like the aroma, it is very subtle but has a more developed profile thanks to a bit of buttered rolls in the mix, though it gets overlooked largely due to the tight draw.

The draw of the first sample remains tight after the cigar is lit, something I’m not surprised by despite hopes that it might suddenly change when combusting. It’s a fairly inauspicious start, with a mild, buttery flavor out of the gate, and a thick, creamy undertone that plays into the tight draw, a fortuitous combination if I’m trying to keep things positive. Pepper and wood notes pick up fairly rapidly in the first inch, and the cigar gets respectably flavorful before the first clump of ash drops off. There’s a bit of a burn issue with the first sample as I figure out the pacing needed to keep it burning, which requires a relight, but otherwise, it seems to be combusting decently. After that first clump of ash drops, the cigar’s flavor opens up a good bit, picking up some sugary sweetness and slightly burnt popcorn, an interesting duality that in certain puffs turns into a kettle corn sensation. The draw in the first sample remains quite firm, meaning each draw is much more labored than I would prefer and focusing my attention on it rather than the flavor. While it’s a bit more peppery, I’d still peg the profile at a mild-plus profile and strength level due to a thin underlying body. The second third of the Por Larrañaga Coronas kicks up the pepper a good bit, both on the palate and the nose via retrohales, with the latter notably bright. Even with the progression of pepper, the base notes stay fairly close to the original notes of butter and grains, now manifesting as buttered toast, a familiar and enjoyable flavor but one I would imagine would quickly get overmatched if any sort of flavored beverage was being consumed. More white pepper joins the aroma as the burn line moves across the midway point, and I’m beginning to push the cigar into the medium-minus territory as a result. The base notes have gotten a bit more substantial by way of a mix of woods and earth mixture that has any thoughts of the breads and cereal grains from earlier now a thing of the past. A bit of rich, smoky sweetness closes out the second third of the cigar, close to pulling just the graham cracker off a s’more, with pepper pushed largely to the background but fairly clear through the nose. Unfortunately, the draw hasn’t improved much, but it’s more of a hindrance than an impediment to enjoying the cigar. 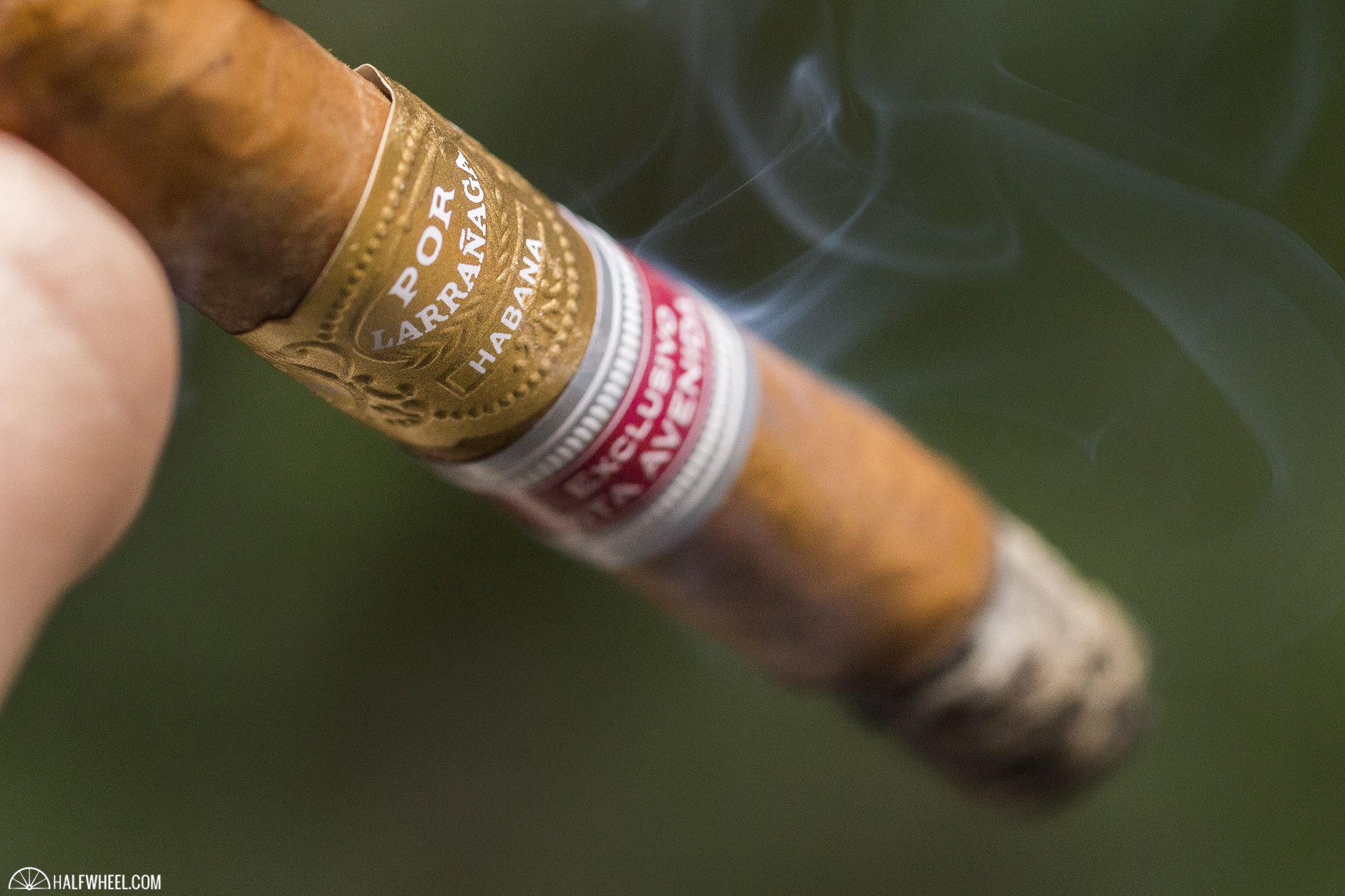 The final third of the Por Larrañaga Coronas quickly ramps up in strength, flavor and pepper, delivering a very engaging combination of mint, earth, white pepper and a light coffee finish. It’s almost too much, too fast, though I will rarely complain when a cigar decides to open up and show everything it has to offer. What does throw things off a bit is the tingle that the pepper and cigar as a whole deliver, getting after the nose and back of the lips with more intensity than I would expect from this blend. The final inch-plus brings on the inevitable heat, seemingly compounded by the slender ring gauge, but with some slower puffing the cigar still manages to finish quite enjoyable. The draw also feels like it tightens up a bit, backtracking on the progress that each sample had been making to this point; it never gets ideal, but at least got to be tolerable for much of the second third and into the final third. Regular smokers of Habanos S.A.’s Edición Regional releases—or regular readers of the reviews of such cigars—know that they tend to fall on to two ends of the scale: incredibly enjoyable and desirable or seemingly off-putting and head-scratching as to how something so bad could be released at such a price point. The Por Larrañaga Coronas definitely skews to the former, and I am happy to report that there is nothing explicitly wrong with any of the three cigars I smoked from a flavor perspective. The draw is another story, which cost the cigar a point or two, but the combustion was fine despite this flaw. Put this release side by side with a Por Larrañaga Petit Corona and I’d have a tough time ponying up the extra money for a few minutes more smoking time, the secondary band and whatever value I might derive from its exclusivity, but I certainly wouldn’t knock it for anything other than that.