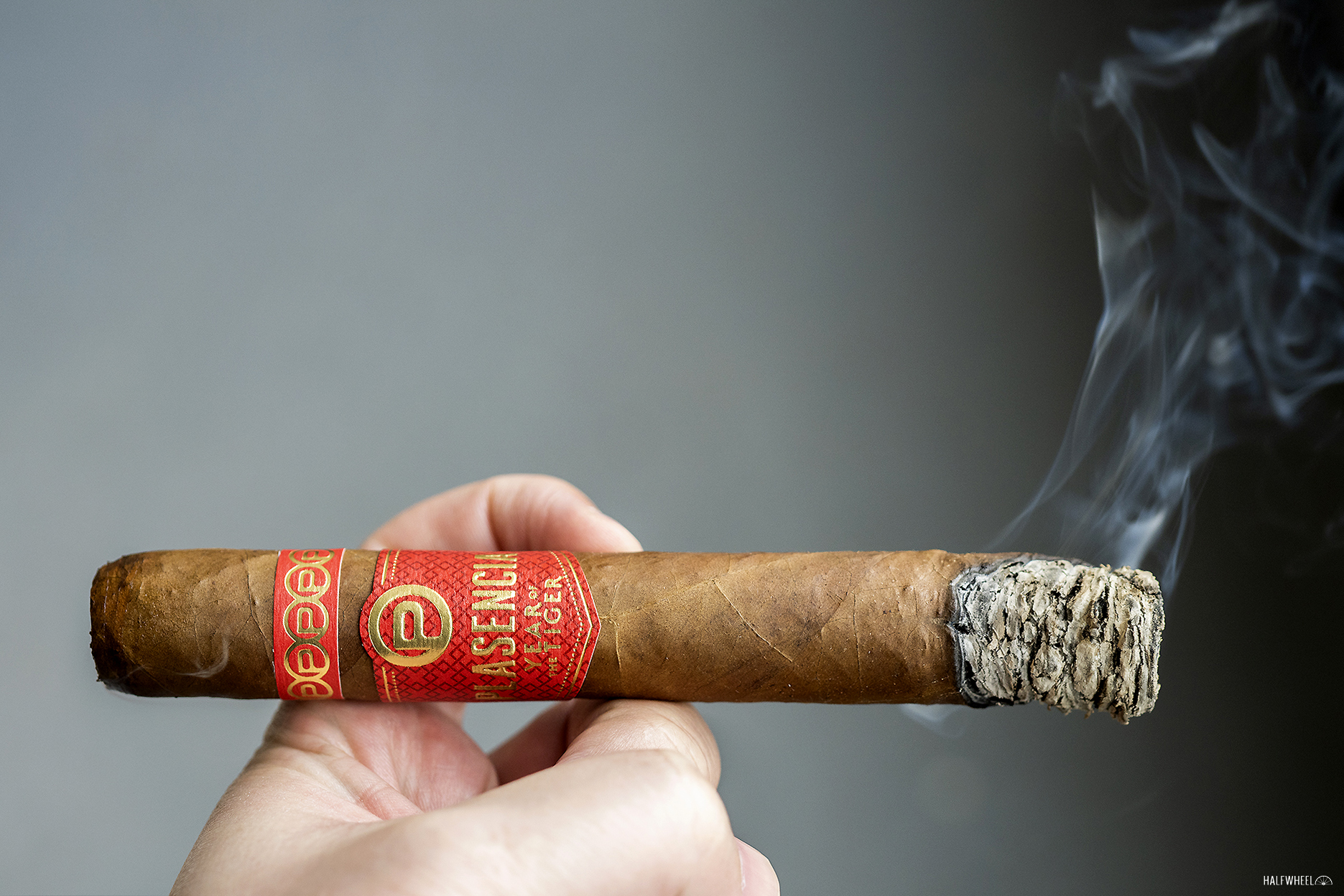 Plasencia Year of the Tiger

Last year, Plasencia 1865 released a Year of the Ox cigar in celebration of the ox being the Chinese zodiac calendar symbol for the new year, but that cigar was not offered to U.S. retailers. This year, the company decided to change that.

On Feb. 1, the Chinese new year began and this year’s symbol is the tiger. Plasencia 1865 along with Davidoff, Drew Estate, Maya Selva and VegaFina released cigars to celebrate the occasion and the cigars share some similarities beyond the use of “tiger” in the name. Each company chose to use red and gold colors, which symbolize good fortune and wealth in Chinese culture. Plasencia, like most of the other companies, also chose to package the cigars in eight-count boxes, a nod to eight being a lucky number in Chinese culture. 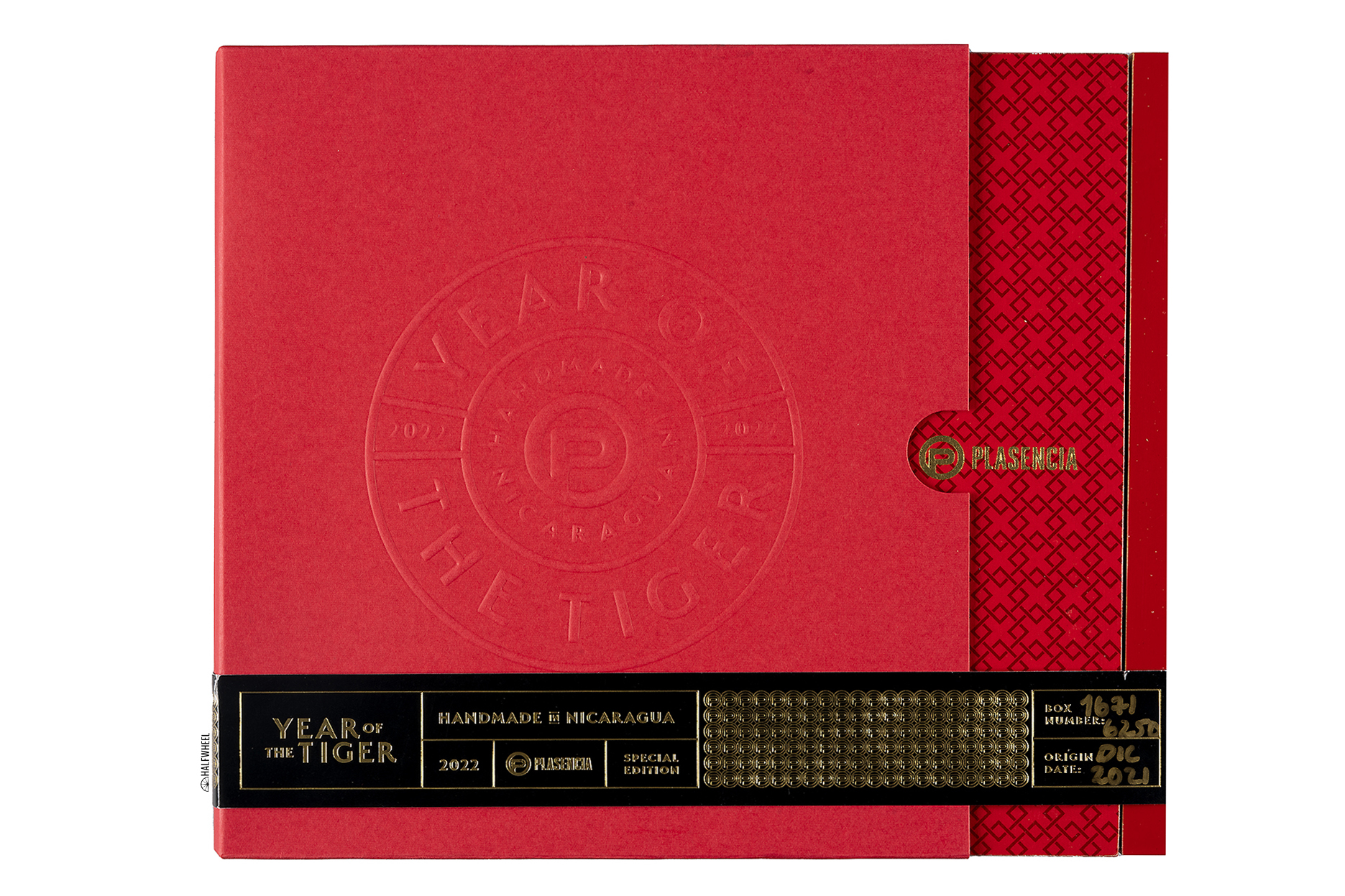 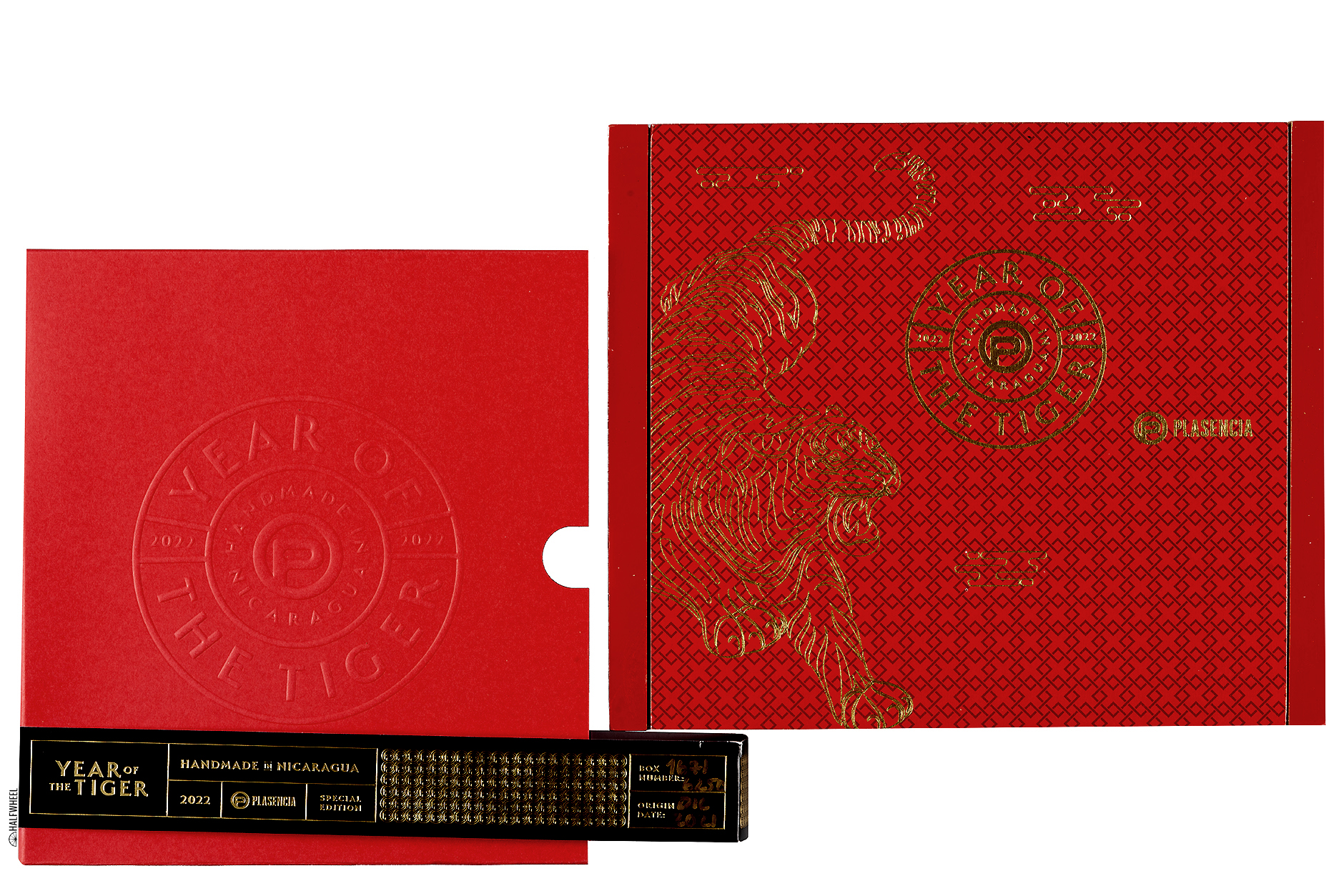 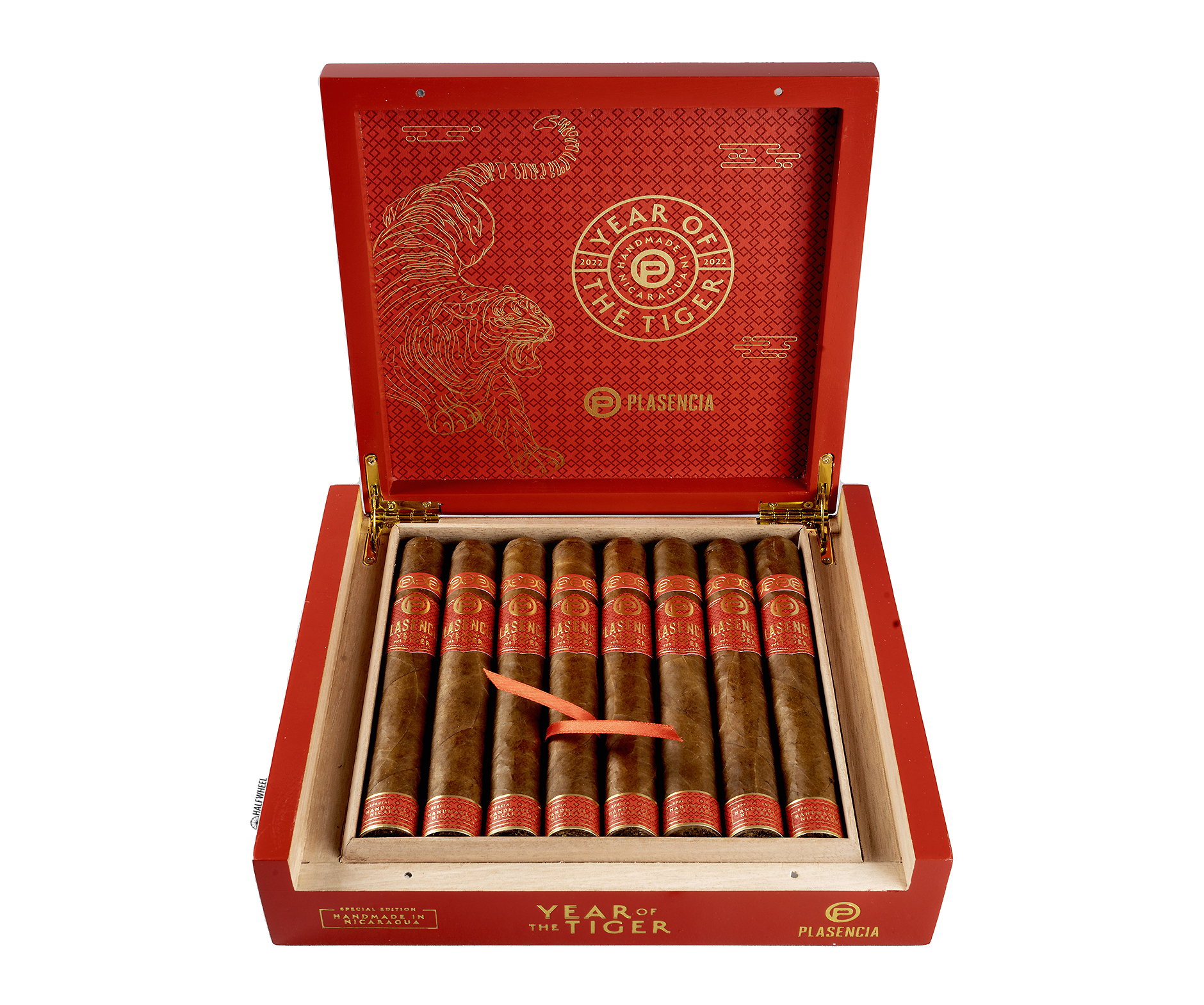 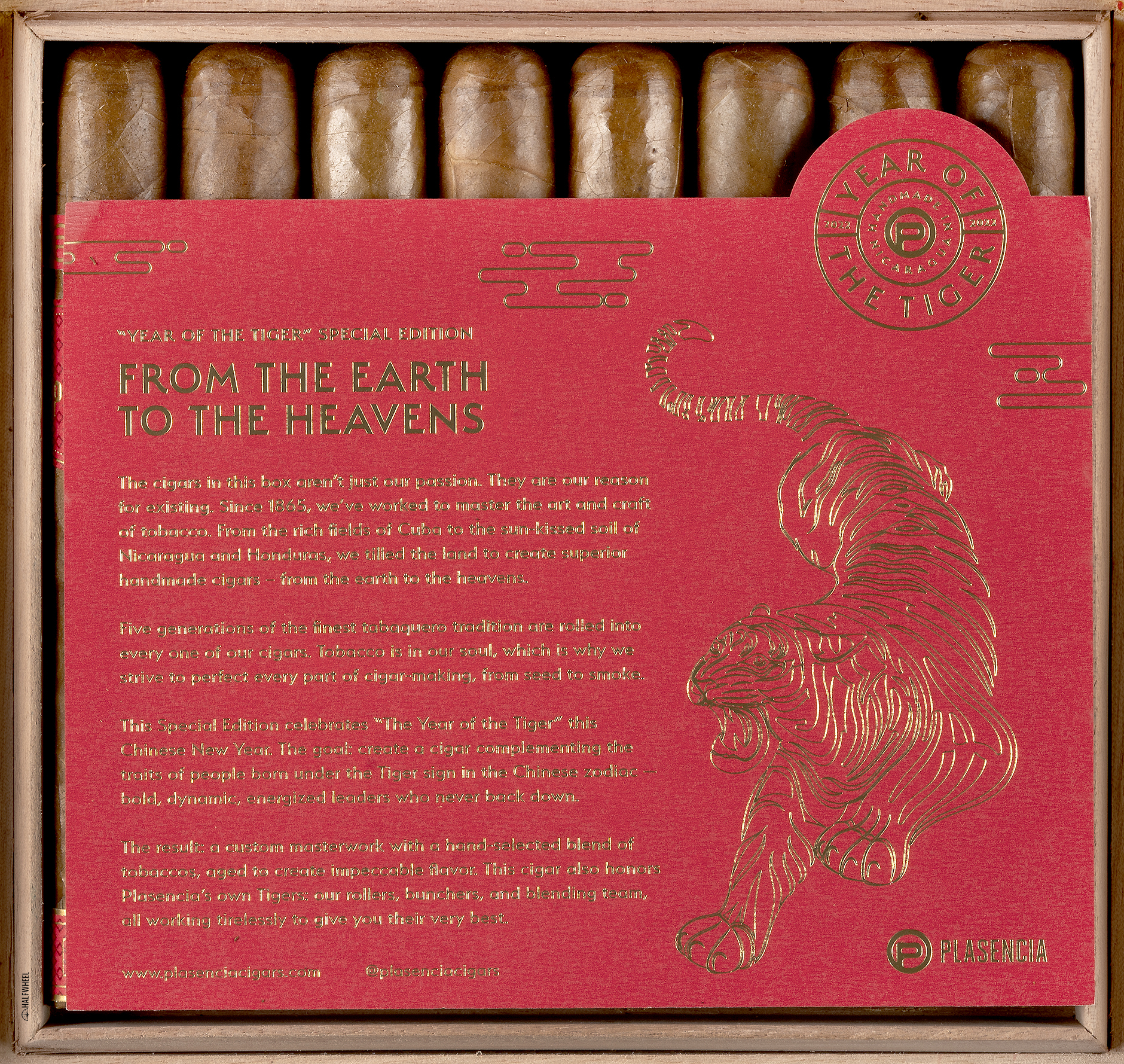 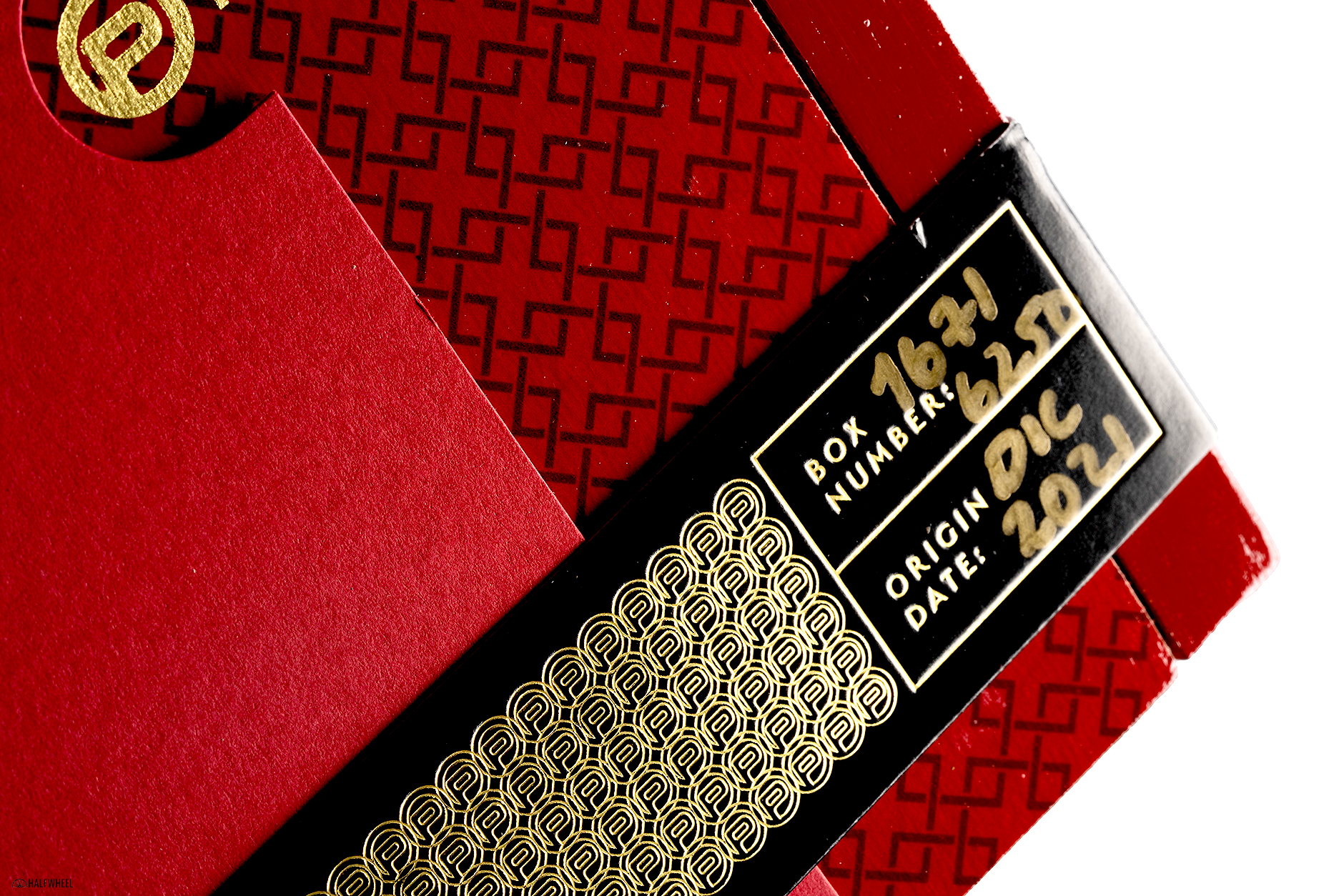 As for the cigar, the Year of the Tiger is a 6 1/4 x 54 Nicaraguan puro that uses tobaccos that have been aged for up to 10 years. For those unfamiliar, Plasencia 1865 is part of the larger Plasencia tobacco empire, which includes massive growing and cigar rolling operations in both Honduras and Nicaragua. Plasencia 1865 is the company that sells the Plasencia-branded cigars, though the family makes cigars for a long list of third-party companies.

This year’s release is limited to 6,250 boxes, though only 2,500 boxes are designated for U.S. stores. The cigars showed up at international accounts in January—which is when we bought our box—and shipped to U.S. stores in late February. 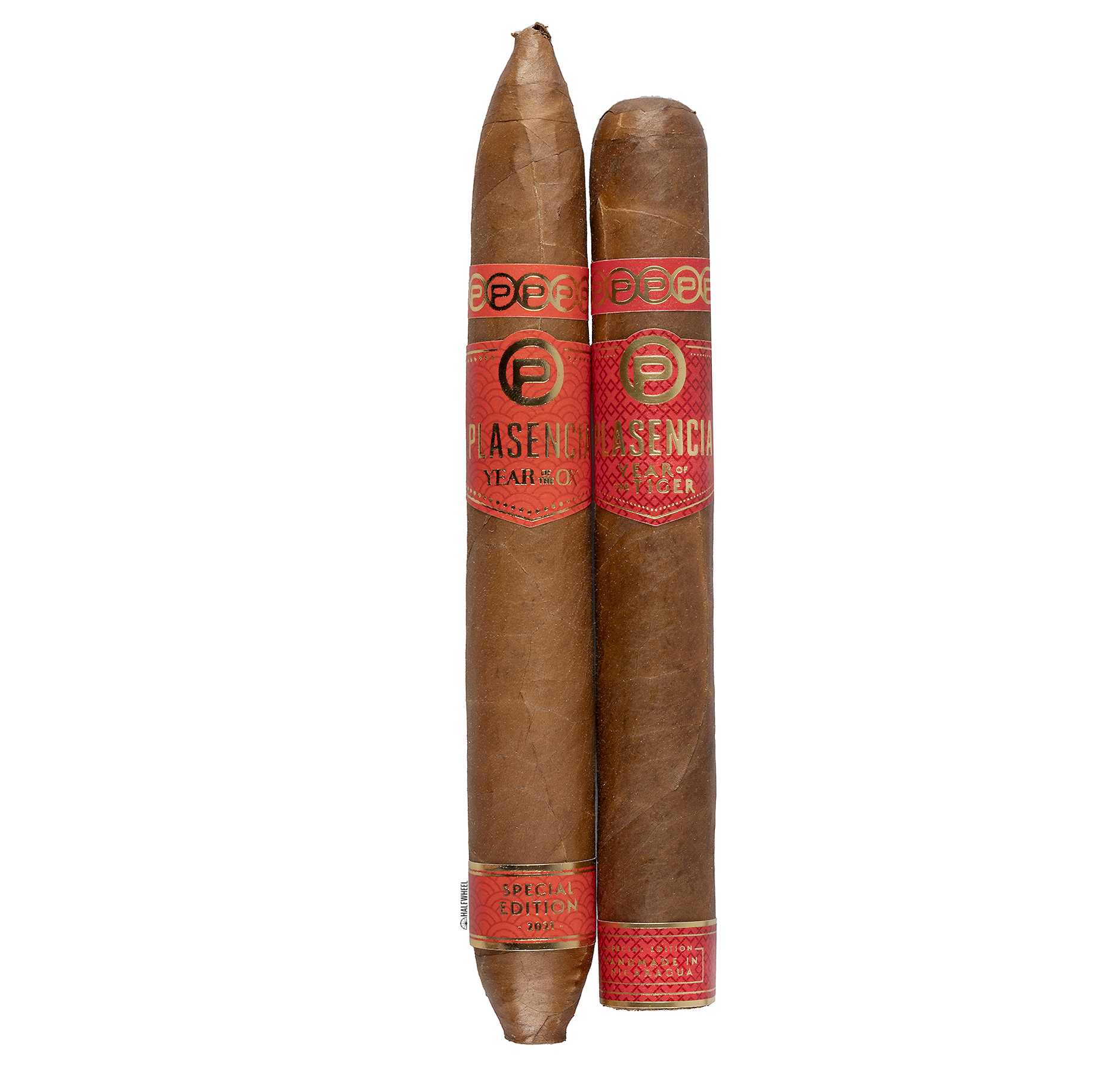 These cigars are remarkably cylindrical-looking from an appearance perspective. While that might sound odd, few cigars actually resemble a perfect circle at the foot and these are pretty close. That said, it’s not all perfect. Two cigars have noticeable soft spots, albeit towards the midway point of the cigar, which is not normally where I find these. The wrapper is a pretty standard brown color with some noticeable veins—including some that are a bit lighter in color—and a medium amount of oil. The aroma from the wrapper is medium in profile but not the most complex of sensations, just some barnyard and oak. Smelling the foot reveals a sweeter array of flavors: almonds, fig, oak, a rum-like aroma and small amounts of floral scents and acidity. The acidity picks up on the cold draw, joined by some white pepper, gumball flavors, earthiness and some orange.

The Plasencia Year of the Tiger begins with cedar, dry earthiness, some lemon on the side of my tongue and then finishes with some coffee flavors. While on each sample I smoke it takes a different amount of time, eventually, the profile settles on peanuts over cedar, generic earthiness and coffee beans. Like the cold draw, it’s a very crisp profile. It finishes with an herbal tinge along with lots of earthiness and cedar. Behind that, there’s meatiness, a touch of a mild spice blend, and some restrained acidity that builds on the tongue. Retrohales have even more peanut flavors, though also more acidity. Some times the acidity presents itself as lemon, other times it’s more of an accent to a sharp earthiness. At one point during the second cigar I realize that my mouth tastes like I just finished eating some McDonald’s french fries with ketchup about five minutes ago. Admittedly, that’s more of a novelty than the full story and the retrohales typically finish with flavors of peanuts in the nose along with earthiness and black pepper. Flavor is full, body is medium-full and strength is medium-plus. Construction is great on one sample, though one cigar needs a touch-up. The final cigar I smoke, there’s a small crack about three-quarters of an inch from the top of the cigar. If I don’t cover it up with my lips, it leaks some air or smoke depending on which part of the smoking process I’m engaged in.

One cigar gets noticeably spicier in the second third—or at least the second half of the second third—though for the most part, the three cigars are similar. Earthiness gets pretty close to the level of the nuttiness and it’s tough to distinguish which one is the stronger of the two given how intertwined they end up being. Cedar remains, but a toastier sensation is more impactful during the second third. Furthermore, the spiciness has been replaced by a more distinct mixture of both red and black pepper. The finish is toastier with nuttiness, banana nut bread, red pepper and, at times, cinnamon. Retrohales have a cleaner version of the nuttiness—not toasty and more isolated from the other flavors—along with herbal flavors, a generic sweetness and a mild cinnamon flavor. At times, the rertrohale’s finish is identical to the retrohale itself, other times there’s a sharper nuttiness, added herbal flavors and red pepper. Flavor is full, body is medium-full and strength is picking up a lot. It starts the second third around medium and is full by the end of the final third. Touch-ups are needed on all three cigars in the second third, always to correct an uneven burn. Despite this, smoke production and draw remain fantastic to the point I don’t really think about them unless I’m forced to. 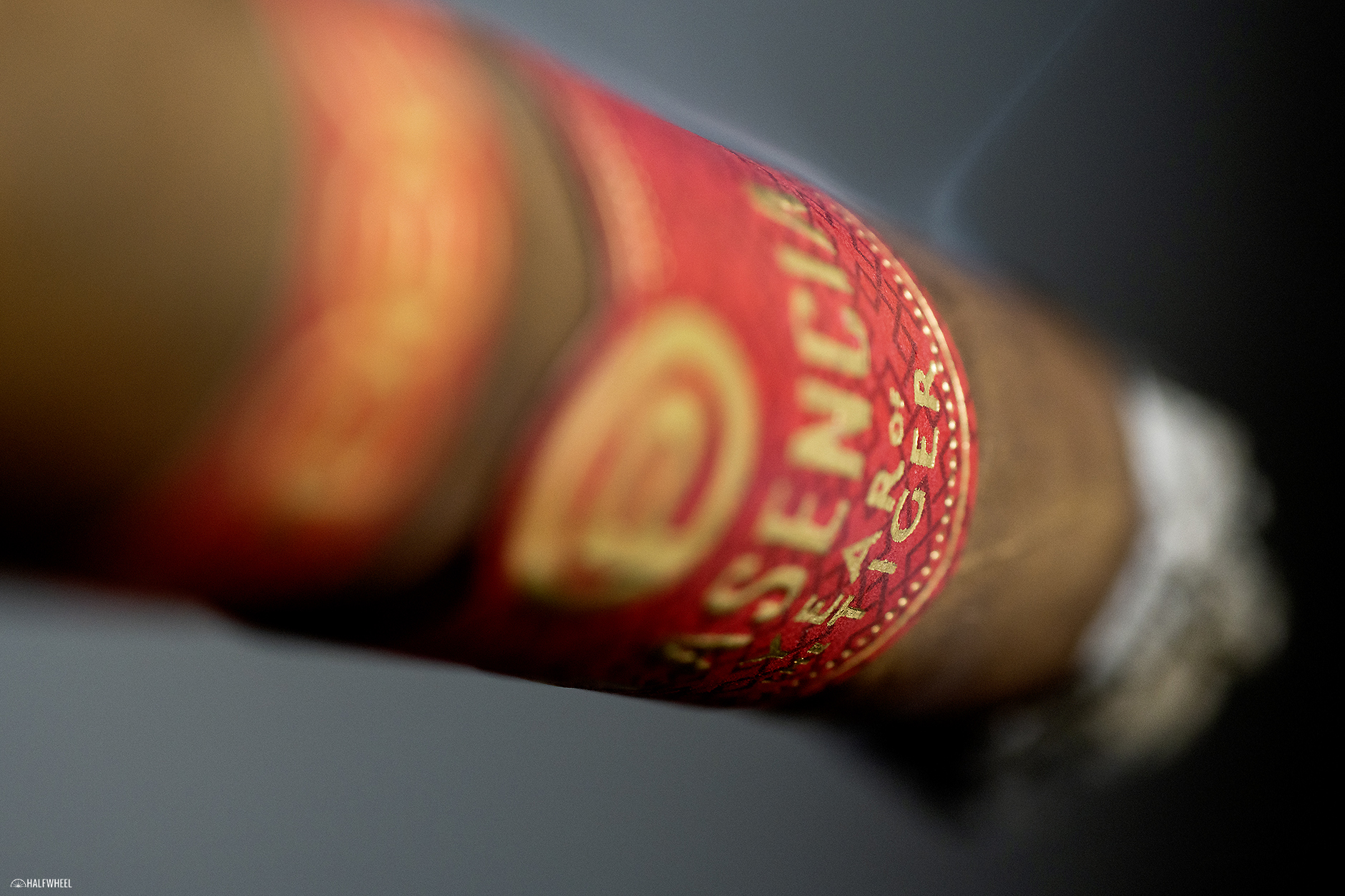 I’m fully feeling the strength during the final third and while it might have me contemplating how much of my evening workout I want to do, I am still very much enjoying the flavor of the Plasencia Year of the Tiger. While it’s not quite like the first third, the nuttiness is able to separate itself from the earthiness, at least until the final inch when the earthiness gets stronger and harsher. Furthermore, cedar remains, black pepper picks up in intensity and there’s a mayonnaise-like creaminess. The finish is led by nuttiness but an added mineral flavors that really change the complexion of the cigar. In addition, there’s some herbal flavors that at times veer into a straw-like flavor along with a very short but sharp dose of black pepper. Retrohales are much brighter than before with a big black pepper note over cedar, earthiness and nuttiness. There’s a softening effect once the smoke has left my nostrils and the profile turns more peanut butter-like with some added white pepper. Flavor and body are both full, strength is very full. Unfortunately, the minor touch-ups from the earlier parts are now more consistent and more concerning as the Year of the Tiger needs help getting to the finish without going out. 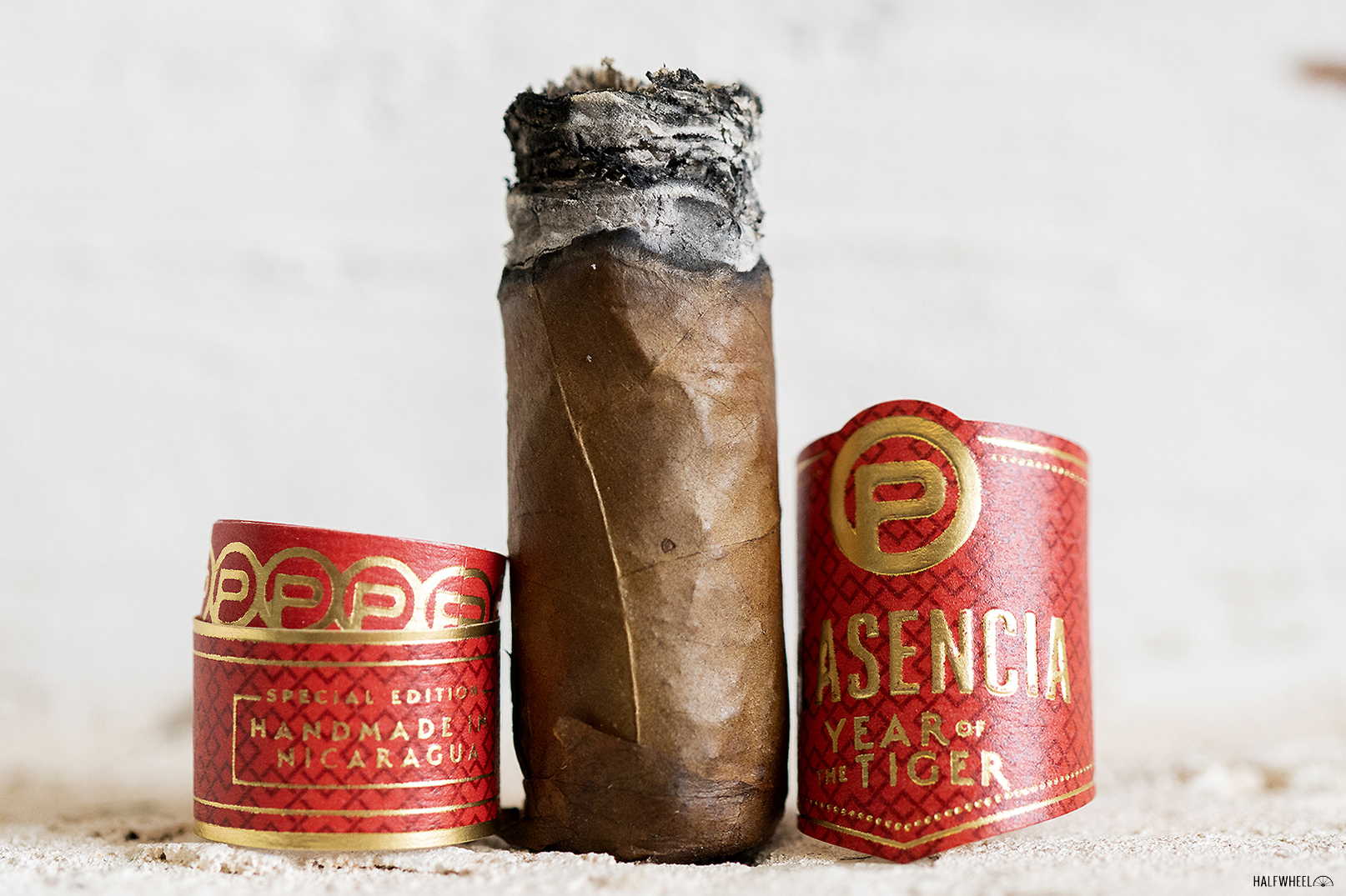 The Plasencia Year of the Tiger is a very good cigar that just isn’t designed to excel at the way we score cigars. From a flavor-perspective, this is a great cigar that falls short of the rarefied air I’d call “excellent,” but it’s still something I have zero issues with. The problems are two-fold. First, there are minor construction issues during the course of the near three-hour long cigar and those chip away at the cigar’s score little by little. And because the cigar was merely great and not excellent from a flavor-perspective, it wasn’t able to get the points it needs that would cover up the minor construction issues. If we took an approach of weighting construction issues against the time it took to smoke a cigar, the Plasencia would fare much better, though the final third’s construction issues were a bit more than just minor. Conversely, this cigar benefits from the fact we don't factory price—it's $40—into our scores. In the end, this is a very good cigar and one that might change quite a bit, particularly when it comes to the strength mellowing out over time.