For the third release in its series of cigars bearing the Alma name, Plasencia 1865 turned to the Nicaraguan island of Ometepe, home to two volcanoes and soil that makes for growing some distinctive tobacco.

The new line, Alma del Fuego, which means soul of fire in Spanish, is a nod to the strength of the cigar, though the company hasn’t simply created a strong cigar. Rather, the company said that the wrapper, a sungrown leaf from Nicaragua’s Jalapa region, adds a good amount of sweetness, while the rest of the blend contributes hints of spice, tangerine, roasted cashews and guava wood. In total the blend is about 75 percent tobacco from Ometepe.

The company unveiled the new line at the 2019 IPCPR Convention & Trade Show, where it offered it in three box-pressed sizes. 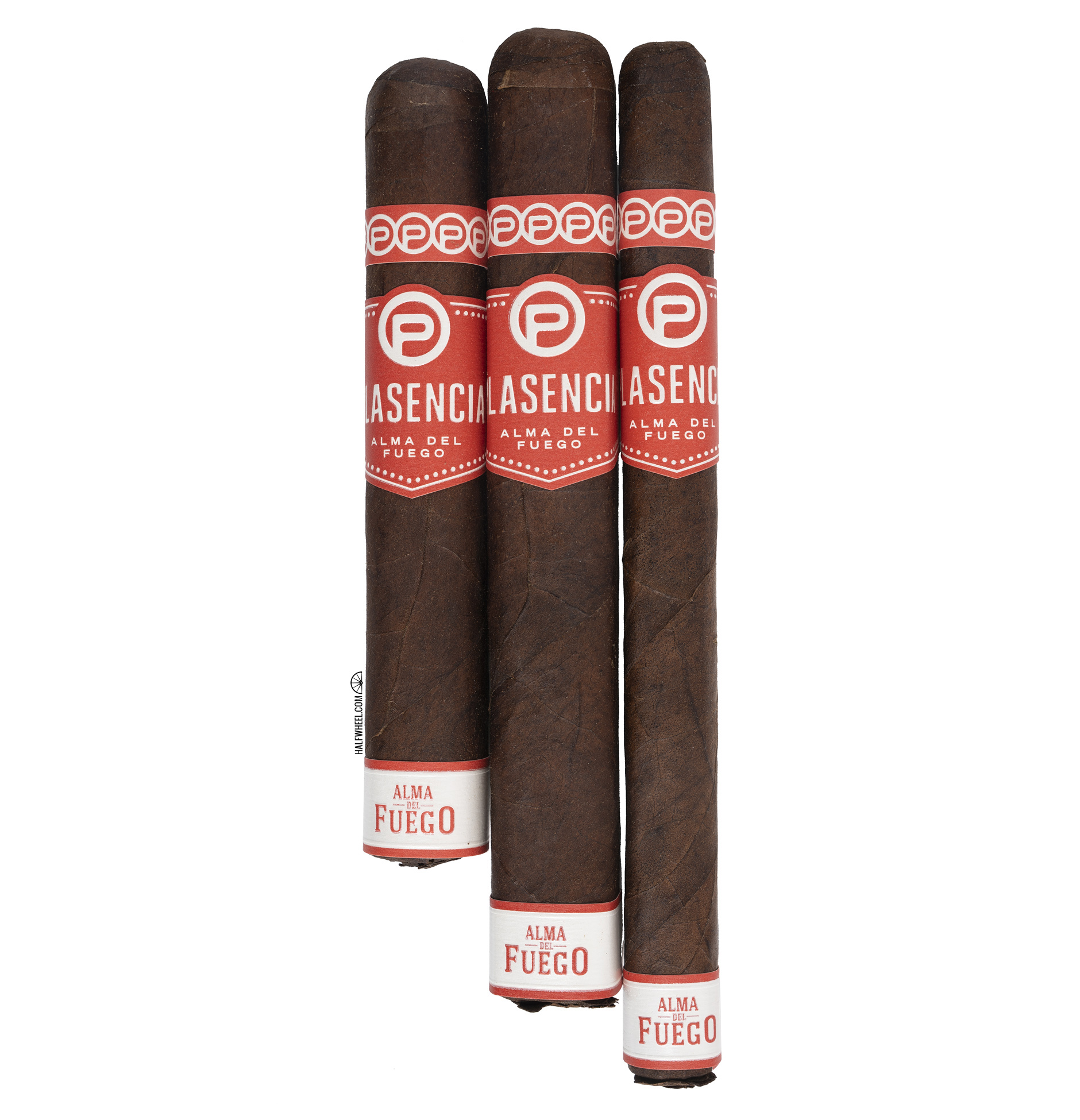 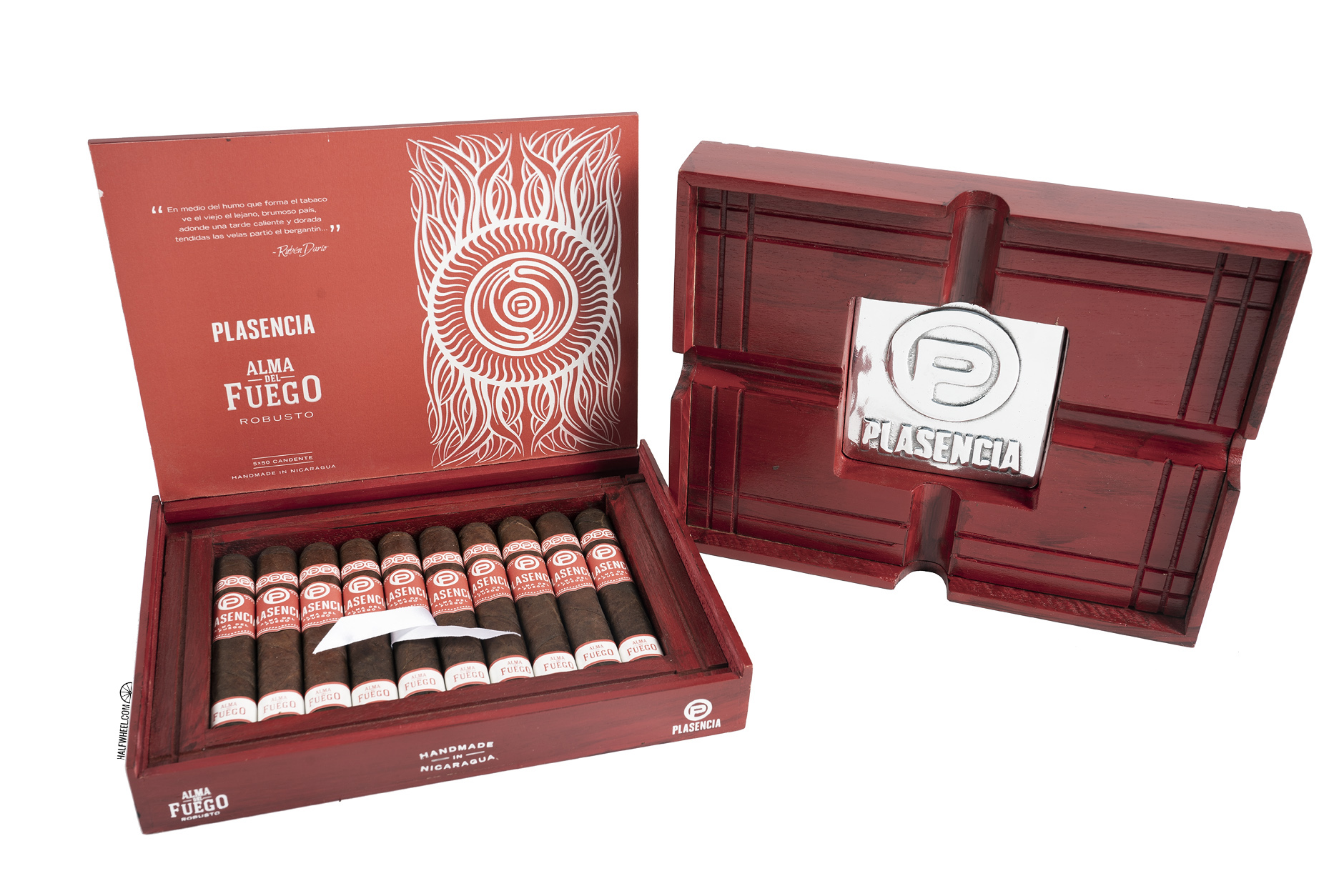 In keeping with the design of the other Alma releases—Alma de Campo and Alma Fuerte—the lids of the boxes are ashtrays. The company has said that there will be a total of five lines to wear the Alma name, though no names or schedule for their release have been announced yet. 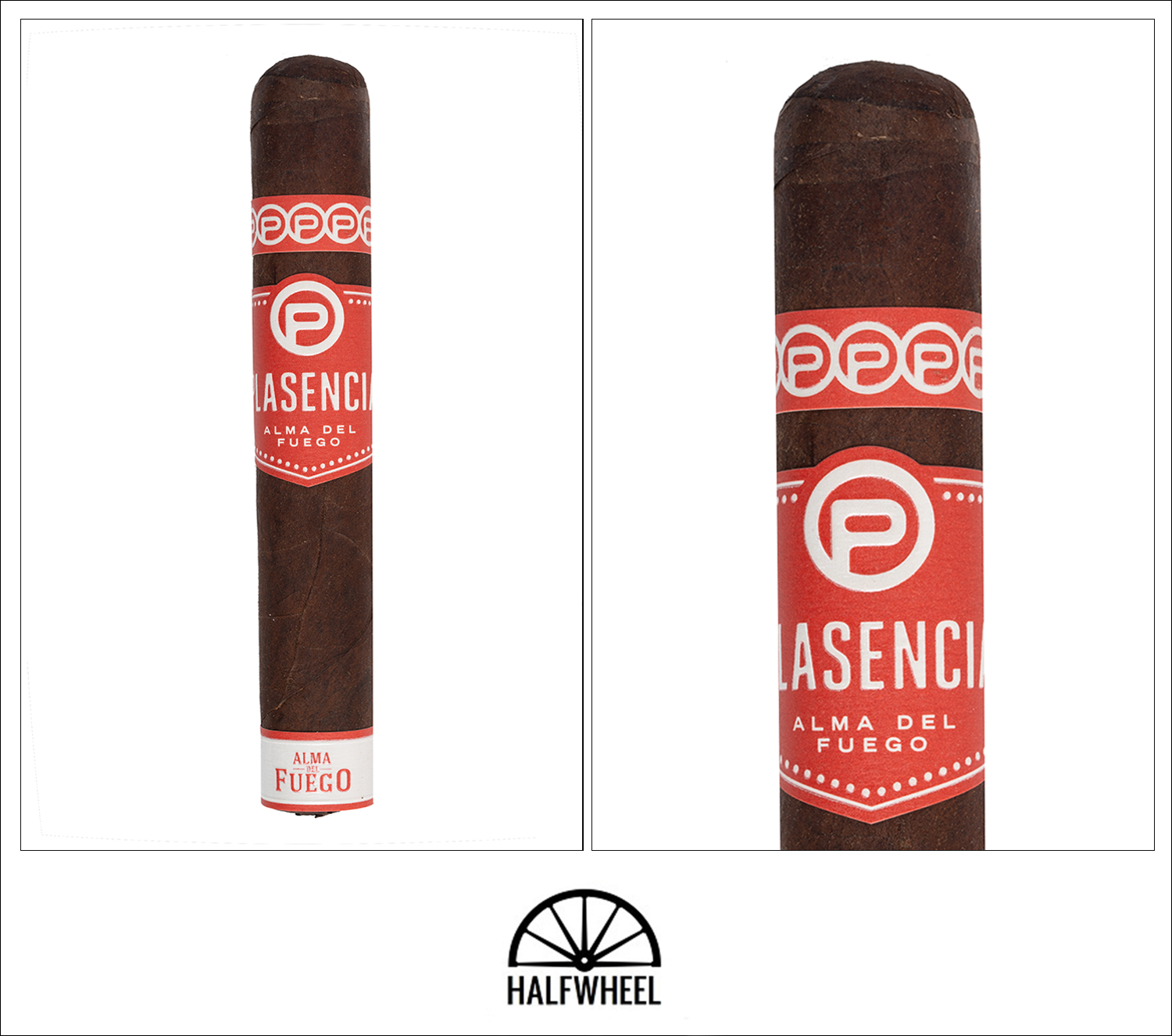 There are two things that stick out about the Plasencia Alma del Fuego: the meaty richness of the wrapper and the fact that there are three bands obstructing my view of it, with two of them seemingly completely unnecessary. The box-pressed robusto appears well-constructed with flat seams and the firm pillow give that a pressed cigar should offer. Additionally, the head is constructed well, the foot nicely covered, and no effects of the press or handling are seen on the wrapper. A closer glance at the leaf reveals a bit more of a rustic look, especially without the influence of the bands. Veins are small and flat, the seams are just barely visible, and it has a very smooth texture to it, not quite velvet but much more that than sandpaper. Aroma off the wrapper is light, slightly sweet and peppery, but not enough to really call them accurate descriptors. The covered foot repeats much of that aroma, and try as I might to get some more complexity from the fillers, it just doesn’t quite materialize. The cold draw offers varying qualities of airflow, two that were very good and one sample that was tight. There is an apple-like sweetness that at times gets me thinking of the core note of an apple fritter or other apple-based pastry, while other samples show more of a coffee-bean earthiness with only minimal pepper present.

The opening puffs of the Plasencia Alma del Fuego Candente aren’t a huge explosion of pepper or flavor, but there are some inklings of stronger tobacco by way of a bit of bite on the front of the tongue. If you’re a retrohaler, taking one early into the cigar focuses the attention on the cigar’s truer flavors and profile, which is bright with white pepper but also grounded with earth and some black pepper. The first clump of ash falls off fairly quickly and unexpectedly, though it was just enough that I was getting ready to photograph it when it dropped. With that drop, however, the flavor gets inline with what the retrohale offers, and the results are quite good, save for just a bit of lingering heat from the smoke. 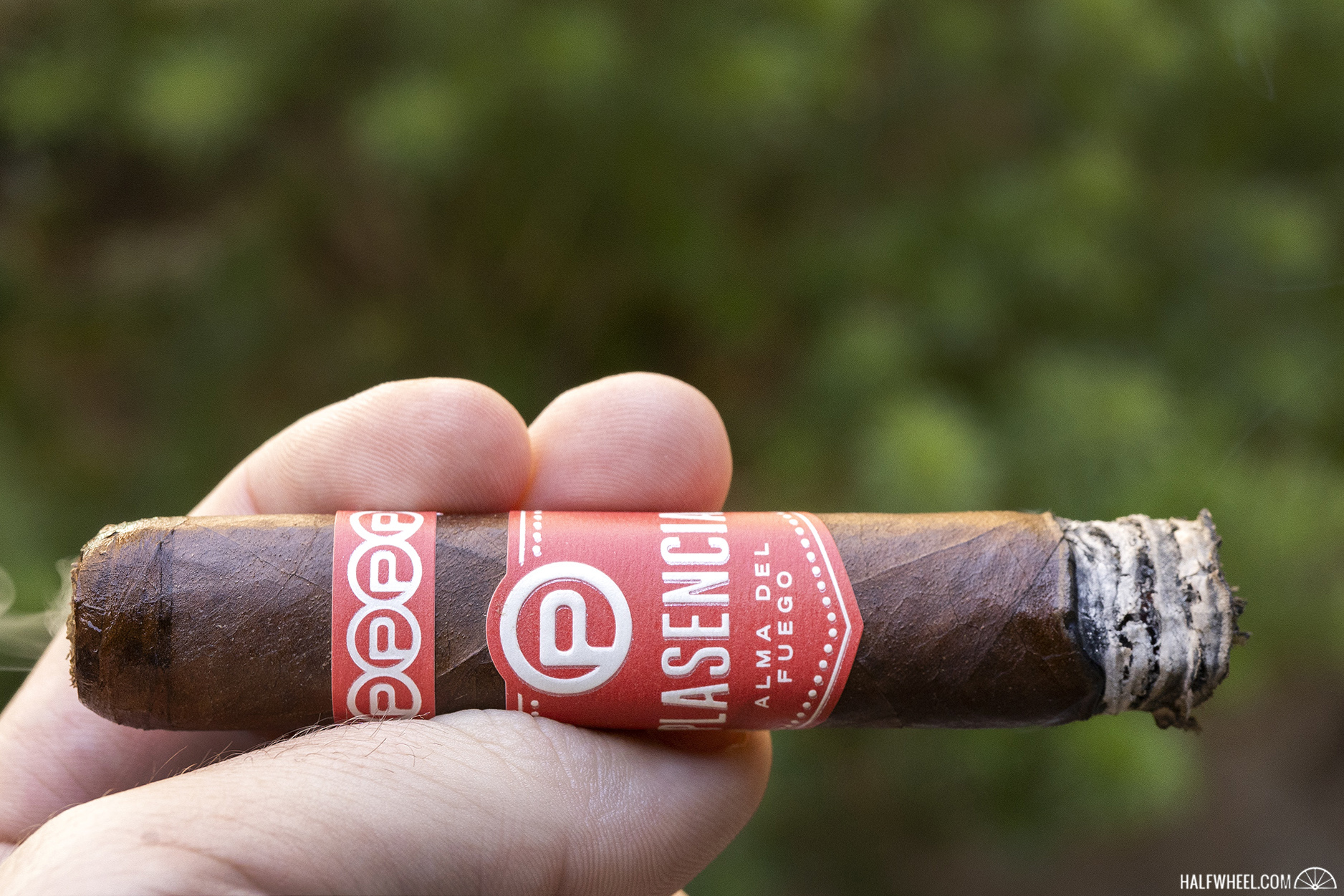 The second third sees the cigar continuing to take slow steps up the fullness and strength scale, as the pepper gets a bit more pronounced and the overall profile fills out as well. There is a bit of mineral to the earthiness, a flavor I seem to be tasting a lot lately, but it’s much more restrained and not dominating the profile. At times, the cigar gets downright meaty, shifting away from its otherwise earth-dominant core, and while I never think I’m eating a slightly charred steak, the cigar does a remarkably good job at making me think of the experience. Retrohales don’t pick up this same attribute, instead leading with white pepper and finishing with a heavier pepper that has a bit of a mineral leaning. The draw and burn continue to be quite good, and given what I’m thinking are heavier tobacco leaves, the combustion rate is quicker than I would have expected. For any robusto the Alma del Fuego seems to be smoking on the quick side, even more so for a Nicaraguan-dominant blend. The final third develops the profile of the Plasencia Alma del Fuego Candente even further; while it had never been muddied or thick in terms of flavor, it has found a new clarity on all fronts. The strength hasn’t ticked up much, though its steadiness is beginning to be felt in my system. Above all of that though, the cigar is incredibly well balanced and not letting any one component—the pepper, earth, or building aloe sweetness—take control of the profile. While it slipped out of the profile for a bit, red chili pepper flakes are back and leaving a lingering tingle on the tongue, possibly a burn depending on your palate. I’m still trying to find the tangerine sweetness that the company said was in the profile, though it doesn’t seem to be standing out enough for my palate to pick up, which while a bit disappointing isn’t a huge detriment to my enjoyment. The burn rate slows a bit, as it feels like it’s taking as long to get through the final third as it did the first two thirds, though that is certainly an exaggeration in terms of reality. The earth and pepper get a bit more distilled in the final inch, concentrating and sharpening up the flavor as the decision as to when to put the cigar down starts becoming more pressing, though the cigar isn’t rushing it, staying balanced and enjoyable under the one-inch mark. Technical performance remains stellar through all three samples. To say that Plasencia 1865 has made a splash with its Alma series would be an understatement, and in my somewhat limited experience with all three of the existing blends, I think it's safe to say that Alma del Fuego is the best of the three. The cigar excels in balance, allowing the Ometepe tobacco to shine without dominating the profile, while the complexity is never disappointing and often quite impressive. The technical performance is also stellar, with not a single problem standing out from my time with the three samples. If you're game for something on the medium-full side, the Plasencia Alma del Fuego is a solid option, one that I have a feeling will be showing up in good positions on end-of-the-year cigar lists.