About two months ago, it was announced that Pinar Del Rio would be releasing a very limited cigar run to be sold through—and only to members of—one of the main cigar forums that I frequent, BOTL.org (or Brothers of the Leaf). The owner of Pinar Del Rio cigars, Abe Flores, and the people over at Burning Leaf Cigars decided to release this specific blend for the forum. There are some plans to make this an annual release as well, although nothing is nailed down as of yet.

The Pinar Del Rio BOTL.org Small Batch 2010 is rolled at Tabacalera Don Leoncio in the Dominican Republic, and is limited to 200 boxes of 20 cigars. It is only available at Burning Leaf in Plainfield, Ill. The cigar I reviewed was a prerelease that was sans band. The boxes, which have not been shipped yet, look like this: 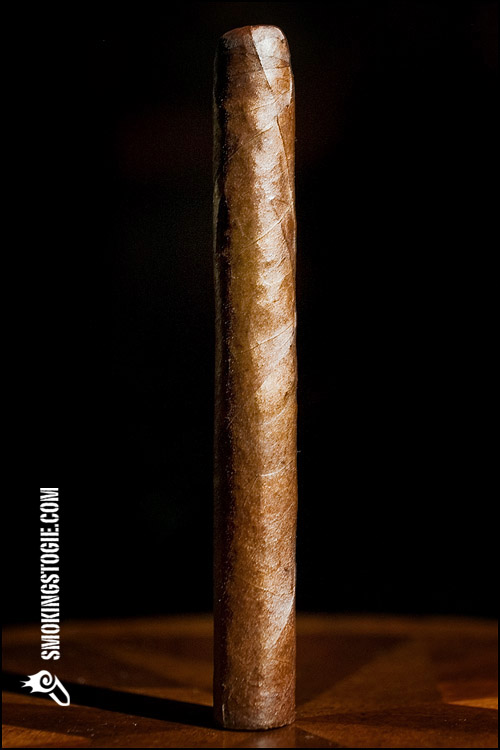 The cigar itself is a great looking cigar—and as you may or may not know from reading this site, I am always in love with the Corona Gorda vitola—with a very dark brown wrapper that smells of spice and leather. The wrapper is almost shockingly oily—it reminded me immediately of an OR Tatuaje T110 in that regard)—and has a very slight box press, and is firm when squeezed. The construction looks to be top notch as well, although the cigar is slightly bumpy up and down its length. The pre-light draw contained quite a bit of a sweet tobacco profile.

The first third started out very mild with straight forward flavors of tobacco, but, about 10 puffs in a major amount of spice comes out of nowhere. It was kind of like turning on a switch labeled “spice bomb.” It was quite strong for about 15 minutes, then calmed down enough for me to taste a sweet maple flavor, along with some cedar and just a bit of leather. The second third started with the spice receding quite a bit, but still fairly strong in the background. There is still a sweet profile to the cigar, but the leather note has really become dominant. I also tasted just a bit of sweet coffee as well, but it was fleeting. The final third had very little change from the second third, other then the fact that the leather note increased quite a bit, until it simply overwhelmed just about any other flavor that was present. It had more of a creamy texture to it, i.e., not as spicy or peppery, but was still almost like chewing on a piece of leather tack—and yes, I have actually done that. The sweetness was reduced as well, ending the cigar quite mild. Basically, this was a very good cigar with plenty of great flavors, but that overwhelming leather note definitely took away a bit from my overall enjoyment. However, there is no doubt in my mind that these cigars will get better and perhaps quite a bit better with a little age and some time to meld just a bit more. Having said that, I enjoyed smoking it quite a bit, and honestly, this is one of the best bargains in cigars, with a price of just over six dollars each.