We’ve talked at length about how certain words have become closely associated with certain cigar companies, whether it be a red X and Arturo Fuente or the word dirty and Drew Estate. Another word the belongs in that list is the word gourmet, and the company associated with it is PG Cigars, the creation of Dr. Paul Garmirian.

While starting his career as a lecturer on politics and international marketing, as well as managing his real estate firm, Garmirian got into the cigar business officially in 1990. But his interested had grown over many years prior to that, including a span of seven years to research and two years to write what would become a notable cigar book of the time, The Gourmet Guide to Cigars.

Garmirian would also release his own cigars that same year, debuting the original PG Gourmet line in Nov. 1990. The Gourmet Series II would come out in 1999, starting with a Torpedo and Robusto vitola before adding the Connoisseur Belicoso Fino vitolas in 2001.

Since its debut in 1990, the Gourmet Series blends have progressively gotten a bit stronger and this newest line is no exception. The blend features an Ecuadorian habano wrapper, while the binder and filler come from the Dominican Republic. Garmirian called it “the smoothest strong cigar I’ve ever made.”

It is being offered in three sizes. The cigars were rolled at Oettinger Davidoff AG’s O.K. Cigars in the Dominican Republic and rested for one year before being shipped to the U.S.

Shipping began to a limited group of retailers in early July, while all Paul Garmirian authorized retailers had their orders shipped shortly thereafter. 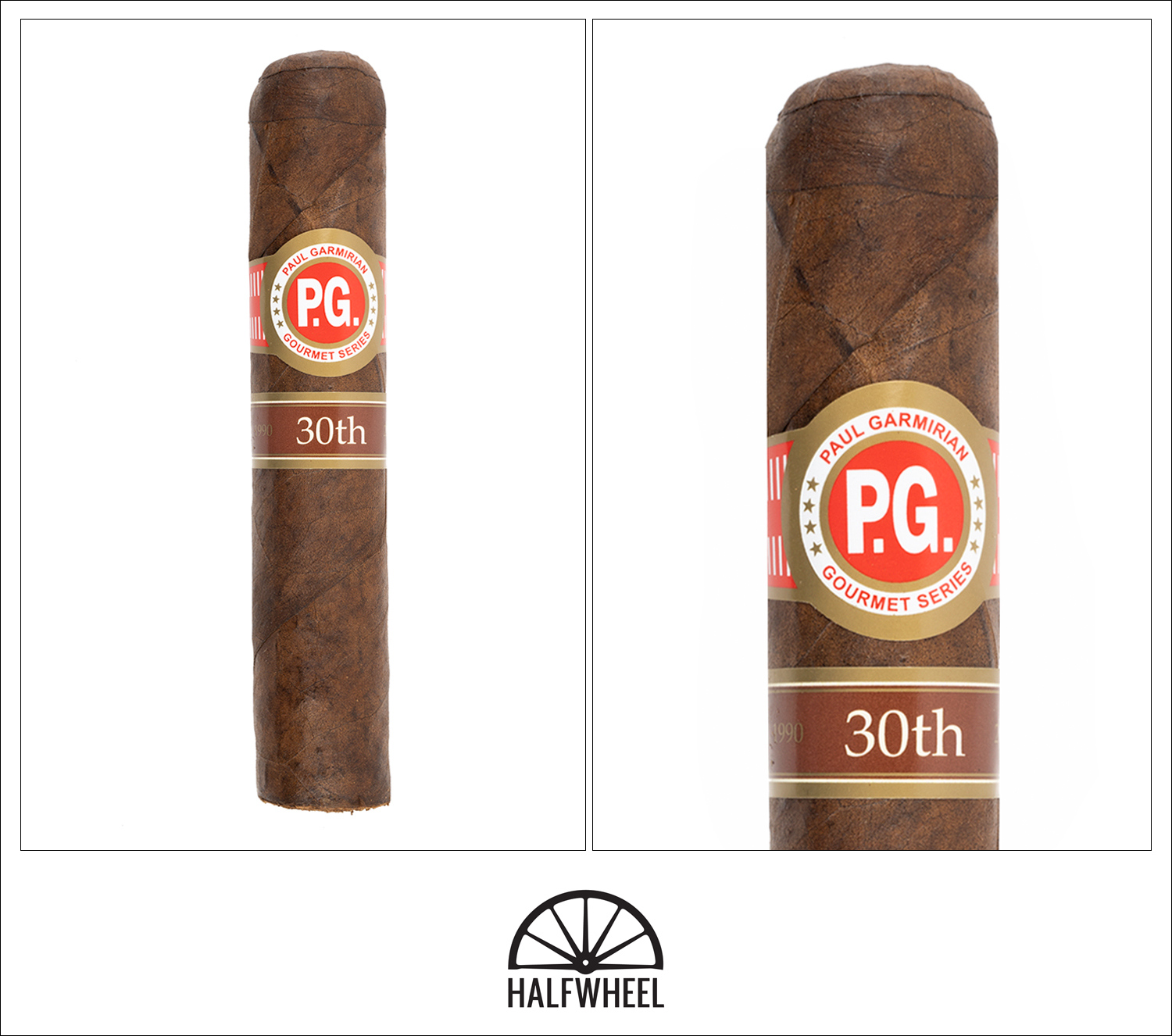 There is something quite visually appealing about the PG Gourmet Series III 30th Anniversary Short Robusto, though I’m not sure I’ll be able to express all of the individual characteristics. It’s a compact cigar but not one that feels diminutive; the bands are simple and straight forward, the wrapper is a dark brown with some oily sheen and it just seems to bring everything together quite well. It’s a well-rolled cigar, firm but not hard, and it looks good visually as well. One cap has either a vein or slight crease to it, but I generally don’t complain too much about things I’m going to cut off anyway. The foot of the cigar offers aromas of blondie bars, dry timber and a bit of pepper, which combine to form a dense yet bright and vibrant smell the tingles the nose. One sample also has softer notes of bread dough, though I didn’t find it in the other two. Air moves well on the cold draw, first greeting me with an almost liquid sweetness, coating the front part of my tongue before evolving into something that reminds me of Dr. Pepper. Beyond that, I find a bit of tame black pepper and more hints at timber, while the cigar itself begins to tingle my lips. The third sample is the loosest of the bunch, a bit looser than I would like as well.

I tend to think of Paul Garmirian’s cigars as generally being on the milder, more refined end of the spectrum, but the first puffs of the PG Gourmet Series III 30th Anniversary Short Robusto quickly indicate this cigar is going to end up on a different part of that spectrum. The flavors aren’t overpowering but they are big and vibrant, with more of the timber woodiness, a bit of the Dr. Pepper sweetness and flavor combination, and just enough pepper to prime the senses for what might lay ahead. Retrohales do an even better job at that, as the nose gets a prolonged tingle from the pepper, which seems like a fairly typical combination of black and white pepper at first before evolving into something much more dynamic and unfamiliar, yet very enjoyable. One sample has a softer smoke, though it almost feels a bit incongruent with the flavors. For some palates, I can see the profile being a bit much given how long it lingers and there are times I even find myself reaching for water to clean it off, but other than that the first third is very enjoyable. Flavor is medium-full, body is medium-plus and strength is medium if maybe a tick more. Other than a surprisingly delicate ash, the technical performance has been very good.

The second third gets underway with a more pronounced wood and pepper combination, with the Ecuadorian habano wrapper seemingly firing on all cylinders. It’s also when the profile becomes a bit heavier on the palate and occasionally beyond the palate. Earth and black pepper become a factor, and with what is left of the woodiness, it can be a bit too rambunctious at times. By this point, I definitely appreciate the fullness of the PG Gourmet Series III 30th Anniversary’s blend, though I’m wondering if its relative youth might be driving things a bit too much and as such, some rest will reveal what this cigar is truly offering. That feeling continues to grow as the flavor picks up a bit more black pepper, dry earth and wood; which while making for a hardcore habano lover’s dream, is a bit much for my palate. The final puffs of the second third add in a bit of dry dense earth and black pepper to firm up the body and keep the progression moving towards a full-flavored cigar. The combustion, burn line and smoke production are all very good. As the final third of the PG Gourmet Series III 30th Anniversary Short Robusto gets underway, I’m now beginning to think the cigar might be trying to do too much, getting a bit rougher throughout each puff. It’s not consistent across the three samples, but it’s consistent enough to be the natural next thought from what came to mind in the second third. It is now a very full-flavored cigar, with strength building as well, Combustion seems to slow just a bit in the final third, though I’m thinking I might have something to do with that as well, as each puff tends to leave more of a lingering finish in its wake. The woodiness of the profile has gotten a bit heavier on the palate and isn’t quite as bright as it had been earlier, while the earth is still dense and middle of the road in terms of its weight. Pepper is more of an accent note on each puff but is the last thing to leave the palate as it lingers for quite a while on the tongue. While a lot of the Cuban cigars reviewed on this site often include the line “this will almost certainly improve with age,” it’s not one used as much for non-Cuban sticks. Yet, it’s one of the main takeaways I’m left with from the PG Gourmet Series III 30th Anniversary Short Robusto. This cigar is certainly among the most flavorful that I can recall from the PG Cigars portfolio and will certainly challenge the notion of the company only offering milder, more subdued blends. All said, I’m really intrigued by what a bit more time could do for this cigar; my hope is that it stays flavorful but shaves off the rougher aspects, which if it does, should result in an exquisite profile befitting of the Gourmet name.