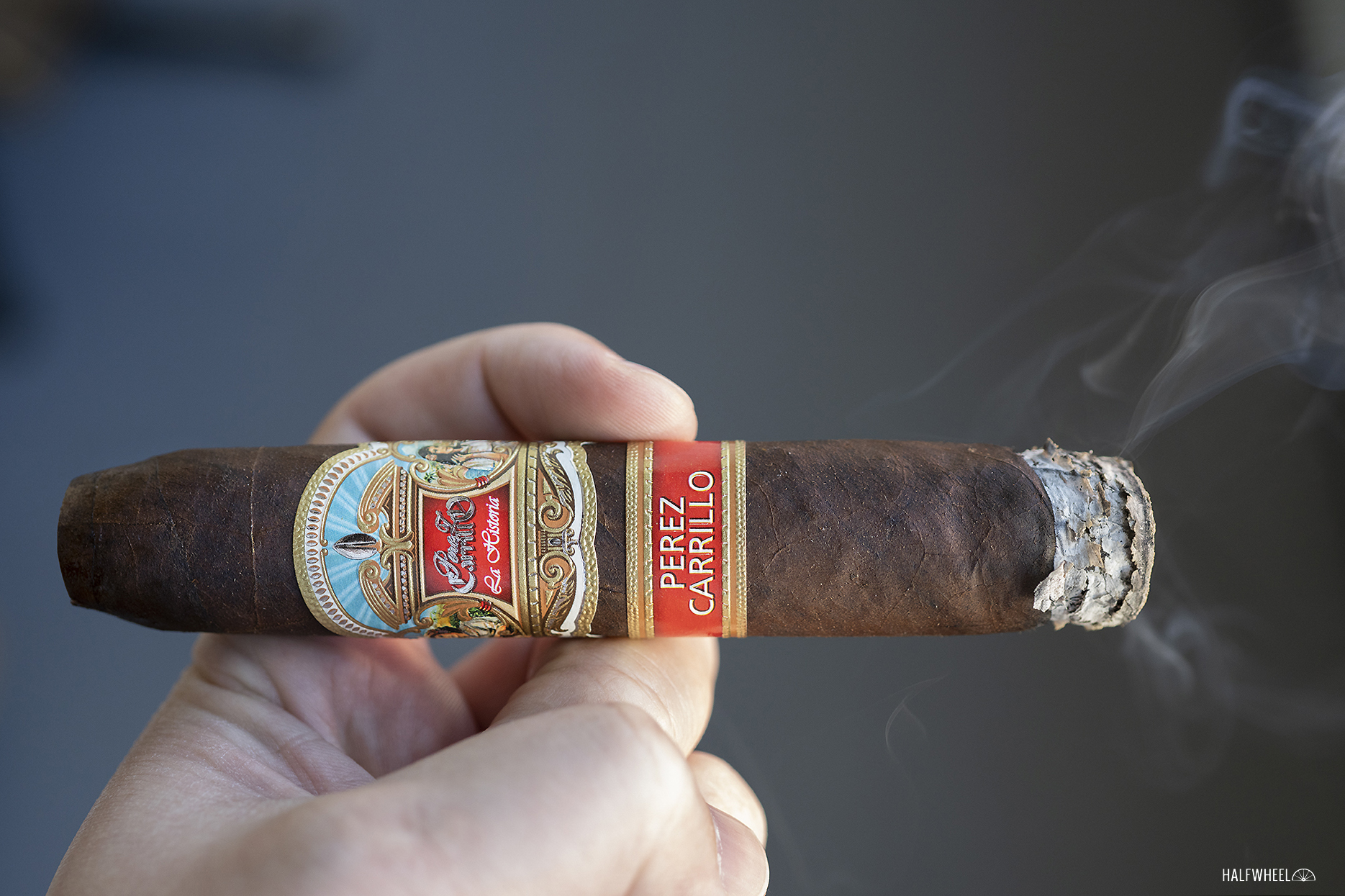 There are now seven sizes of the Perez-Carrillo La Historia line, but in 2015, there were just four. Three were released in 2014—the original sizes—and in 2015, E.P. Carrillo added a thick, box-pressed belicoso to the line.

That size is called the Regalias d’Celia, a 5 7/8 x 58 belicoso. As with the rest of the line, it uses a Mexican San Andrés wrapper over an Ecuadorian Sumatran binder and fillers from Nicaragua. For a line that’s gotten notable accolades and now includes a very nice lonsdale size, I feel like the Regalias d’Celia has been forgotten about, I mean I certainly forgot about it.

I reviewed the cigar shortly after it came out and was impressed with some aspects of the cigar but had issues with two things in particular: the burn and the harshness in the second half:

My annoyances with the bands asides, the Regalias d’Celia had some problems. The burn issues are troubling, particularly the extreme consistency of them from cigar to cigar, but more concerning, each sample seemed to fall apart flavor-wise midway through. The Perez-Carrillo turned harsh and even when there were rays of hope with other flavors, the harshness quickly shot those dreams down. I can’t recall a cigar that had a tale of two halves quite like this; one so good, another leaving so much to be desired.

Last week, I took a look in my redux box and saw one of these remaining and quickly remembered that the cigar had some good features, but suffered from a notably bad example of a poor burn on one side of the cigar. Given that it’s been more than six years, I figured now was as good as any to light up my final original sample.

The cellophane doesn’t look new, but it’s not showing much sign of yellowing. I’d be remiss if I didn’t mention that not all cellophane will turn yellow after a few years in the humidor. I’m not 100 percent sure of why some cigars turn cellophane yellow and others don’t but I suspect it’s a combination of the cellophane itself, how the cigars are stored and maybe even the type of wrapper. The wrapper has a brown color that is reminiscent of the color of a Hershey bar, though there are some added red colors. One bizarre aspect of this particular cigar is the foot ribbon which takes about 15 seconds to remove because the cigar has gotten a bit thicker in the humidor, adding tension to the ribbon. The aroma from the wrapper is pretty full and is led by some sort of weird smell that reminds me of an artificial nuttiness. It joins fish sauce and some barnyard and creates for a rather interesting aroma. The foot smells like chocolate syrup over some more of that weird artificial nutty flavor. In a weird way that flavor is almost so bitter that it doesn’t taste bitter. Cold draws have some of the artificial nuttiness along with some chocolate and earthiness.

The first thing I notice when starting the Perez-Carrillo La Historia Regalias d’Celia is that the draw has tightened up quite a bit. I taste a dry mixture of oak and earthiness over some mild fruity flavors. I end up making a second cut, not necessarily because of the draw’s impact on construction, but actually to help the flavor. There’s very little sign that this cigar is as old it is. Flavor is full, body is medium-full and strength is medium-plus during the first third. Flavor-wise, there’s earthiness, cedar and white pepper, while the finish has white pepper and leather. Retrohales have black pepper, some raspberry and leather. The finish has lots of earthiness, cedar and black and red pepper flavors. 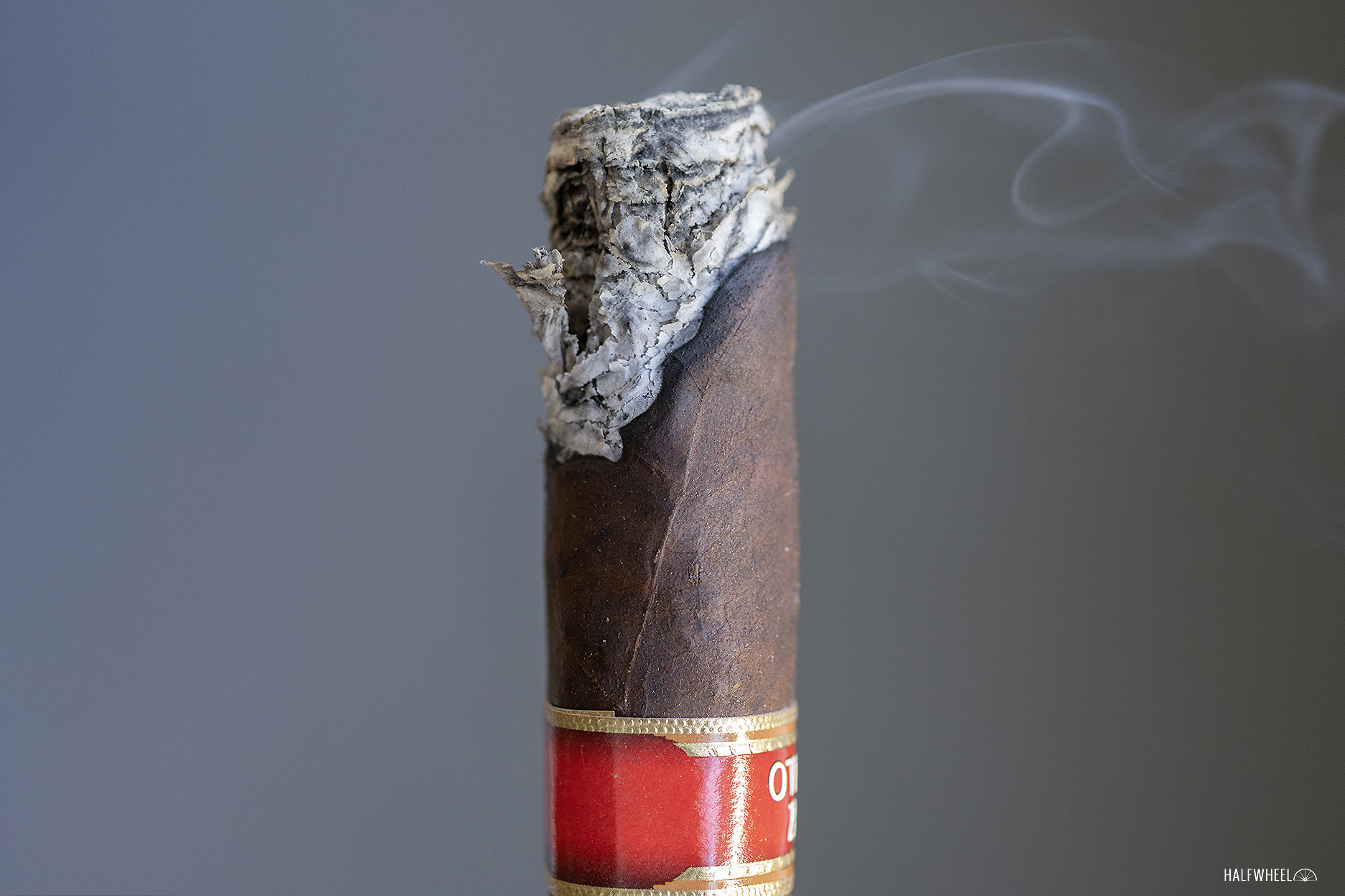 We don’t normally include two smoking pictures for a redux review but I wanted to show that I had an issue similar to when I originally reviewed the cigar. As you can see, while one side of the cigar was burning well, one side was not creating a very uneven burn.

The second third dries out a bit compared to the first third. That being said, there are many new flavors: oak, some teriyaki sauce, a generic pepper blend and, at times, a fruity sweetness. The finish has flavors of bread, mineral rocky flavors and black pepper. Retrohales have cedar, teriyaki sauce, coffee and flavors that remind me of wheat beer. The finish has black pepper, nuttiness, chalkiness, leather and white pepper. Flavor is full, body is medium-full and strength is medium-full. The flavor gets spicier in the final third and sees the earthiness joined by barnyard and a mild coffee flavor. At times, that earthiness gets more like a damp earth, though it’s not consistent. The finish has cedar, mineral-laden earthiness and black and white pepper. Retrohales have earthiness, white pepper and leather. Flavor ends full, body is medium-full and strength is full. Touch-ups are needed throughout the cigar, sometimes to help with an uneven burn and other times to help with the smoke production, which decreases as the Regalias d’Celia burns down.

Let's get the easy part out of the way: there's plenty of life left in the Perez-Carrillo La Historia Regalias d’Celia. After more than six years, there's enough strength and body that would make most people not consider this a cigar from 2015. More to the point, the cigar is better but not clear of all of the problems that plagued it when I first smoked it. The flavor has gotten both better and worse—slightly worse in the first, significantly better in the second half—and the burn is improved, but not fully fixed. For me, this remains the weakest size of the La Historia line.