For the past several years, one of the first clumps of stories about new cigars each year has the same three letters attached to it: TAA.

The Tobacconists’ Association of America is a group of about 80 retailers and 40 manufacturers who gather late in the first quarter or shortly thereafter to discuss issues facing the industry and conduct a buying event that features several notable components, including the announcement of about a dozen cigars just for the group.

In 2019, E.P. Carrillo announced a 6 x 56 vitola for its La Historia line, and in 2020, the company brought that same vitola to its Perez-Carrillo Encore line.

The Perez-Carrillo Encore line dates back to 2016 when it was shown off at that year’s IPCPR Convention & Trade Show, though it wouldn’t get its official release until March 2018 as Ernesto Perez-Carrillo Jr. wasn’t happy with the wrappers and wanted to give them a bit more aging.

The line would debut in four sizes and a fifth vitola, the Perez-Carrillo Encore 10th Anniversary, would be released in November 2019 by way of a limited edition set that included the Encore and La Historia blends in 6 1/2 x 56 perfecto vitolas.

As with the other sizes in the line, the Perez-Carrillo Encore 656 is a Nicaraguan puro, and while the specifics of those tobaccos have not been disclosed, what has is the treatment that some of them undergo. A portion of the tobaccos is aged in tercios, a method of processing tobacco that involves putting the leaves in bundles and then wrapping them with the leaves of a royal palm tree.

While the name tells the length and ring gauge of the cigar what the name doesn’t mention is the extreme box press that the cigar gets, as it comes in a rather flat shape that gives an oval-like shape to the cylinder.

It’s a limited release, with just 750 boxes of 10 cigars produced and sold only to TAA stores. Pricing is set at $13.25 per cigar, with production handled by the company’s Tabacalera La Alianza S.A. factory in Santiago, Dominican Republic. 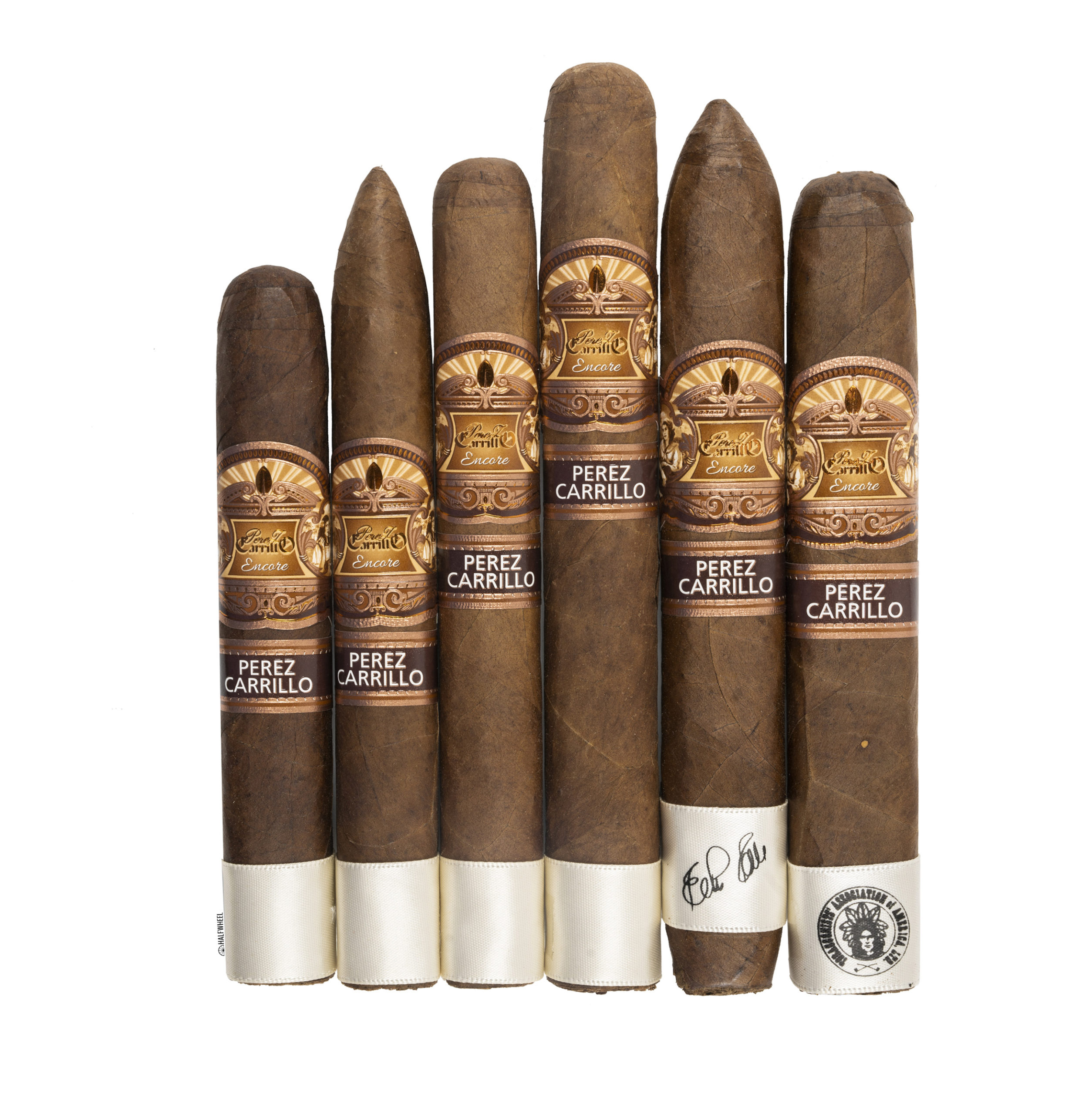 The Perez-Carrillo Encore 656 is one of 14 cigars that was announced for the TAA’s Exclusive Series program in 2020, which are generally revealed during the organization’s annual meeting and trade show.

The releases from CLE and Crowned Heads are not expected to arrive this year. The Perez-Carrillo Encore TAA has a box-press about as extreme as I can ever recall seeing; if it weren’t done so well I’d probably question whether it was sat on or otherwise crushed somewhere along the way. It’s a bit firmer than what I expect from a box-pressed cigar, lacking that pillowy give that I find most of the time. It still feels consistent and well-rolled, something reinforced by the look of the cigar. There is just a bit of oiliness to the wrapper leaf, which is a well-tanned shade of brown, generally even in color with a handful of very flat veins. The foot offers notes of pretzel bread with varying degrees of toast to it, then peanuts or cashews depending on the sample, a bit of creaminess and then just a touch of pepper trailing all of that. The cold draw is fairly mellow with a bit of mild woodiness, some cool and sweet creaminess, and some white pepper hitting the tip of the tongue on the finish.

After a generally mellow, slightly toasty start, black pepper comes along and gives the profile some immediate brightness and character. Shortly after, a cool, thin creaminess comes along to help balance that pepper. Smoke absolutely pours off the foot of the cigar with each puff, filling the ambient air if there’s no breeze to usher it away. Retrohales offer a profile led by white pepper with a bit of the creaminess in the background, but the tingle is likely enough to overshadow any subtleties, or at least make it challenging to note what else is happening. As the burn line approaches the one-inch mark, the Encore 656 fills out its flavor and body, pushing both into the fuller end of the spectrum. From there, it is an evolution into a consistently rich and occasionally peppery cigar, with plenty of earth and nuttiness setting the tone for the flavor, black pepper added in for increased tingle and mouthfeel, while the smoke takes on the thick chewiness of cookie dough. That texture also serves as a good format for some sweetness to emerge by way of a dense caramel that enhances but doesn’t overtake the profile. Technical performance has been very good so far, with plenty of smoke and fantastic combustion. The burn line can get a bit wavy, but it generally self-corrects quickly without needing a touch-up. Flavor and body both alternate between medium-full and full, while strength starts closer to medium and finishes closer to medium-plus.

Notes of mixed nuts and white pepper start the second third and drive much of the middle portion of the cigar, with a bit of wood flavors backing notes along with some earthiness, though less than what I got earlier. That shifts into black pepper and the first touches of earth across the midway point, though the body is still closer to medium while the flavor might suggest something a bit fuller and heavier on the palate. That said, there is still some caramel sweetness that flirts with my taste buds and increases the complexity exponentially. While I don’t know if the cigar would benefit from more of it in terms of quantity, I wouldn’t mind more of it in terms of frequency. The final puffs bring on a change to the pepper as it has just a bit more gruffness and the first hints of char as it seems to get a bit earthier on its own. The technical performance is still very good, with an ideal draw and still good combustion and smoke production. Flavor and body have held steady in the medium-full range, while the nicotine strength has taken another couple of steps forward and finishes this portion right on the verge of being full. The final third gets underway with a huge blast of black pepper via a retrohale, something that not only gets my attention but provides some huge sensations through the nose and an eye-opening, maybe even eye-watering profile shift. While the first third might have been rich in its complexity, the final third shows more brashness from it. As the pepper continues to do its thing, the nuttiness wants to pull the profile in a slightly different direction. There is still some of the very subtle caramel sweetness. It’s a flavor that is very easy to overlook or possibly overpower with a beverage, but when smoking the cigar on a clean palate and only drinking water it’s allowed to shine and the results are all the better. Combustion runs into occasional challenges in the final inch and a half, which merits bringing out the lighter to get the cigar to a fairly normal nub of unburnt tobacco. Otherwise, it burns well, while flavor has backed off just a tick to medium-full, body stays around medium-full, and strength has thankfully dialed itself down just a touch to finish between medium-plus and medium-full. While it might seem like much of the requests for new vitolas lean towards thinner ring gauges, sometimes a blend needs a bigger ring gauge to show all that it has to offer, which is what I think is the case with the Perez-Carrillo Encore blend. This thick, heavily box-pressed vitola seems to have just a bit more filler to help give the blend more depth and complexity. There's more creaminess and sweetness than I recall getting in the other vitolas. While both are mild enough to possibly be overlooked and just infrequent enough that they don't get thought of as the main takeaways from the cigars, they might well be the best parts. A bit of combustion issues hampered the final third, but overall the Perez-Carrillo Encore 656 is a very enjoyable cigar that is worthy of picking up if the opportunity presents itself.