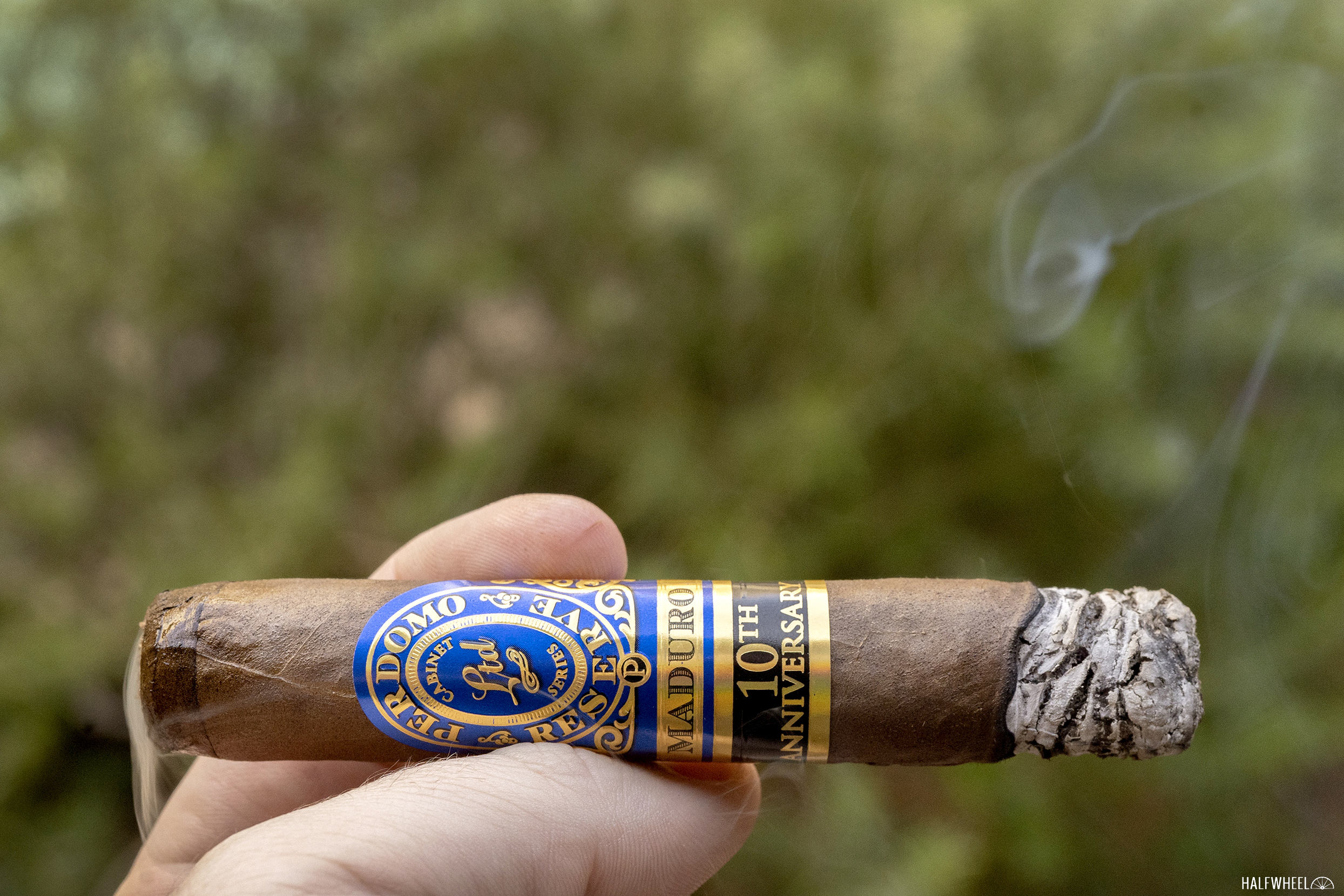 If you’ve read this site for some time and with some regularity, you’ve probably heard someone bemoan the task of keeping track of the anniversaries that cigar companies celebrate. It is a rather mundane problem to complain about, and keeping track of such things does come with the job of covering the industry.

So while I won’t mention it much further, I did have to take a moment to remember just what Perdomo’s two newest releases were celebrating when they were announced this summer.

The company expanded its Perdomo Reserve 10th Anniversary with both a maduro version and a sun grown version, which join the existing Perdomo Reserve 10th Anniversary Champagne, which uses an Ecuadorian Connecticut wrapper. The addition of the two new sizes rounds out the Perdomo trinity of wrappers that have been featured on seemingly every new line that the company has put out in recent years.

Yet the gap in between the releases was interesting. The Perdomo Reserve 10th Anniversary Champagne came out in 2004, just over a decade after the company was founded in 1992. Since that time, the company also celebrated its 20th anniversary with the aptly named Perdomo 20th Anniversary that was released in 2012. Interestingly, that line was released in maduro and sun grown options first, then the Connecticut was added in 2014.

“Our Perdomo Reserve line has been on the market for over 20 years,” said Nick Perdomo, Jr., president and ceo of Perdomo Cigars, via a press release. “We wanted to come out with something really special to honor the history of the brand and offer a cigar that every cigar smoker would truly fall in love with.”

The Perdomo Reserve 10th Anniversary Box Pressed Maduro features a six year-old-wrapper, with 14 months spent aging in bourbon barrels. The binder and filler are also six-years-old, though did not get the bourbon barrel treatment.

The other cigar released alongside the maduro version, the Perdomo Reserve 10th Anniversary Box Pressed Sun Grown, is released in the same six sizes. That cigar also uses a six-year-old Nicaraguan wrapper, though it gets 10 months in bourbon barrels, with the company describing the blend as medium- to full-bodied with a core of earthy flavors highlighted by hints of spice and sweetness on the finish.

“We blended these cigars with six-year aged Cuban-seed wrapper, binder, and filler tobaccos that we carefully hand-selected from our most prestigious farms located in the Estelí, Condega, and the famed Jalapa Valley in Nicaragua,” said Perdomo. “We blended these cigars to not only be rich in flavor, but also to be very smooth on the pallet with slight hints of sweetness. Our tasting panel with over 250 years of cigar making and premium tobacco experience was amazed at how great this blend tastes.” 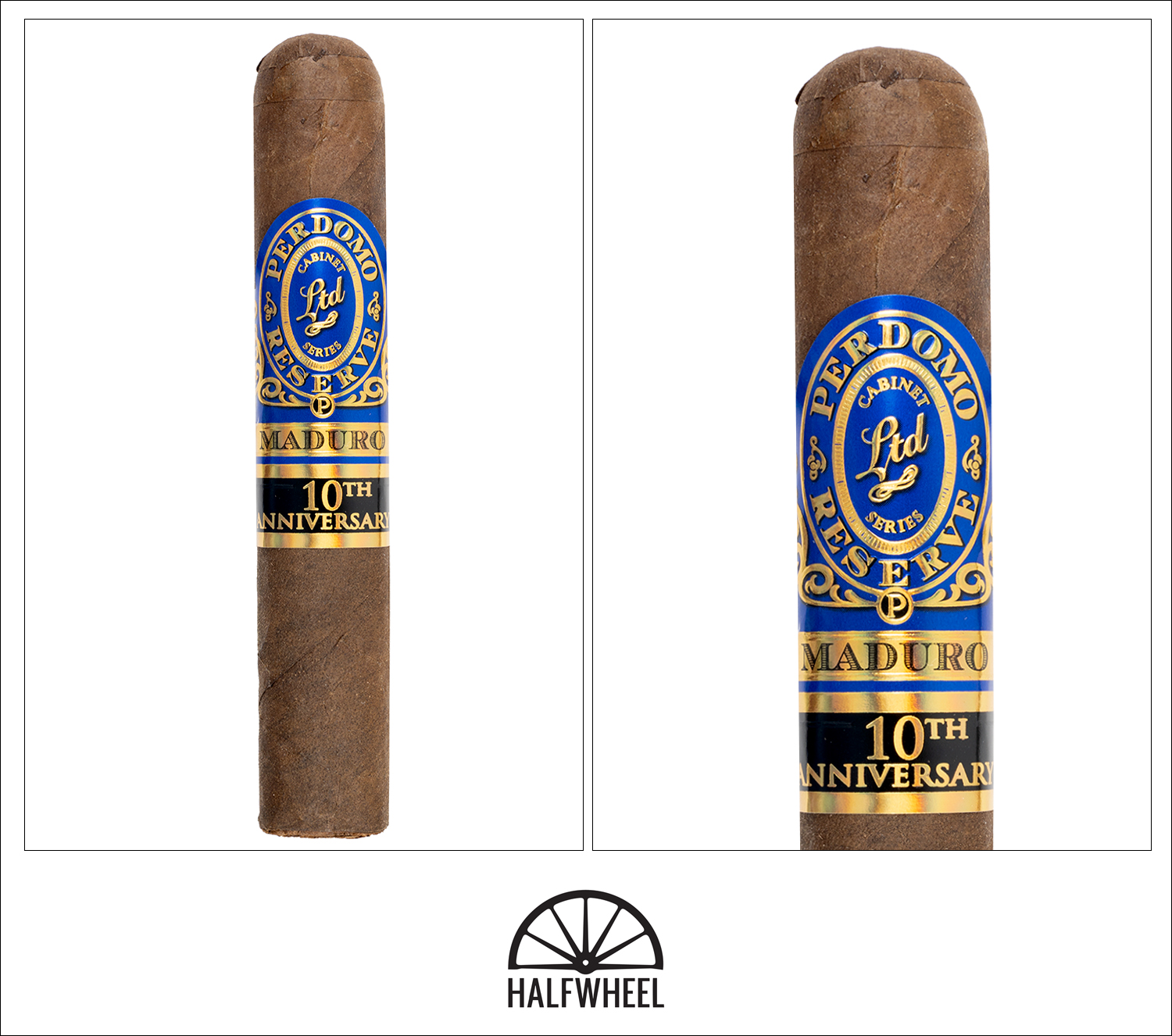 The cigar felt a bit soft at first, but then I remembered it was box-pressed and it suddenly felt very familiar. It’s rolled and pressed well, though a small piece of tobacco doesn’t lay flat on the head of one cigar. As for the visual appearance, the band commands a lot of attention thanks to its glossiness, but looking past that, the wrapper has a cocoa-hued color with a bit of toothy texture and small veins. It’s also a bit on the dry side, not offering much oiliness for the eyes or fingertips. The foot smells like a bit of chocolate-covered raisins, almost Raisinets, though with a bit less of a chocolate component as it takes on a cocoa powder aroma. There’s also a bit of wood, wheat bread and finally black pepper, appearing in that order. The cold draw is a bit open on the first sample and a bit firm on the second, while the third is the happy medium. Regardless of the air movement, the Perdomo is very tame with flavors offering a bit of a wheat bread or cracker flavor and the occasional repeat of cocoa powder and a hint of raisins.

The Perdomo Reserve 10th Anniversary Box Pressed Maduro Robusto starts off with an earthy flavor the is big and bold, packing a mix of black pepper for the tongue and white pepper for the nose, but not much in the way of sweetness. It’s seemingly an unapologetic start to the Nicaraguan puro, going right after the taste buds while retrohales pack a fitting follow-up punch and tingle. While not shy, the initial body is a bit thin, a bit under matched for the flavor, but it works. The second sample doesn’t deliver quite the same flavor, adding a bit of waxiness while dialing down the flavors, a tradeoff the doesn’t quite seem worth it. Other than the occasionally uneven burn line and a draw that’s a bit open, this Perdomo burns well through the first third, producing plenty of smoke as well. Flavor is medium-full to full, body is medium-full, and strength is medium but building.

Between a slightly open draw and the removal of the band, the first sample feels like it rushes into its second third rather quickly. In the case of this cigar, it’s just under 30 minutes, and that’s with my normal smoking pace. Not long after it’s into the section, I get a bit of milk chocolate coming out, first a slightly smokey version that reminds me of a s’more, before black pepper comes along to dash that thought. The second and third samples show an impressive acceleration of the flavors and aromas, not quick but progressive into a more robust profile, and even with firmer draws, still burn quickly. Black pepper and a bit of dry, aged wood come out around the midway point, the first time I pick up flavors that would suggest the barrels in which the wrapper was aged. At the end of the second third, the Perdomo Reserve 10th Anniversary Box Pressed Maduro Robusto is quite robust thanks to a rocky and peppery earthiness, those flavors so tightly intertwined it’s hard to pull them apart. What does stand out is a slightly burnt brownie note on the finish, a very pleasant and familiar sweetness that slowly overtakes the original flavor. The draws are each what they have been previously, but things are problem-free otherwise. Flavor is full, body is medium, and strength is somewhere in the middle. 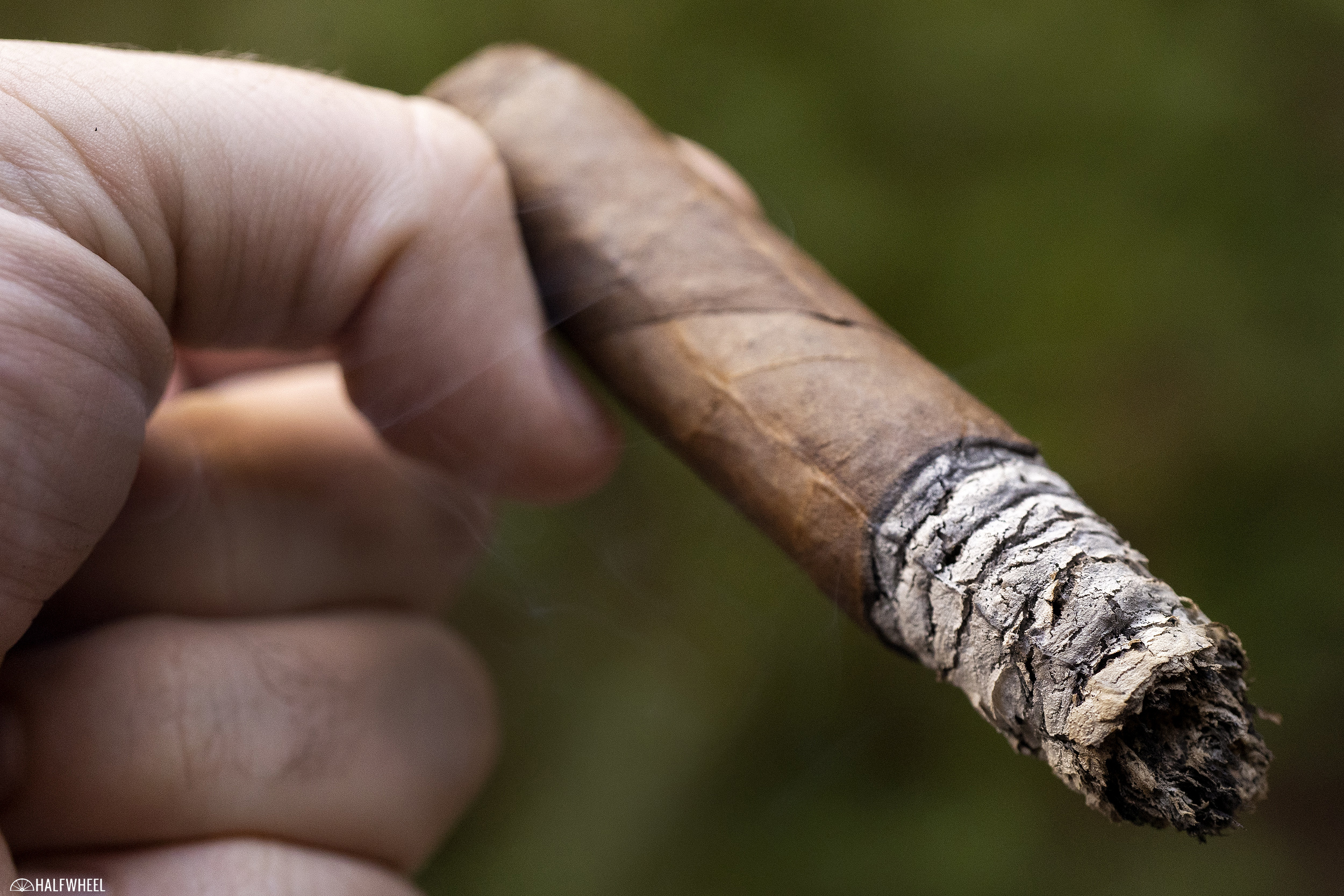 It’s a bit of a stretch, but the brownie note is evolving into a chocolate milkshake flavor, though the physical sensation that goes with it is still much more brownie-like as my mouth gets a bit drier with each puff. Beyond that, there seems to be a bit more of the combination of the woodiness of the barrel-aged tobacco, the earthiness and the black pepper. It’s dry and robust but still palate friendly, certainly more so than I would have expected had I been given that description. That progression into the more robust profile is the story of the second half, though each cigar gets there on its own timeline. However, by the final two inches, they are all quite earthy and dry with decent amounts of pepper as well. It’s also where the idea that the cigar might be getting to be a bit much for my palate enters my mind, though it’s not enough to have me put it down early. Flavor finishes full, body medium-full, and strength a manageable medium-full as well. Construction remains problem-free as well. 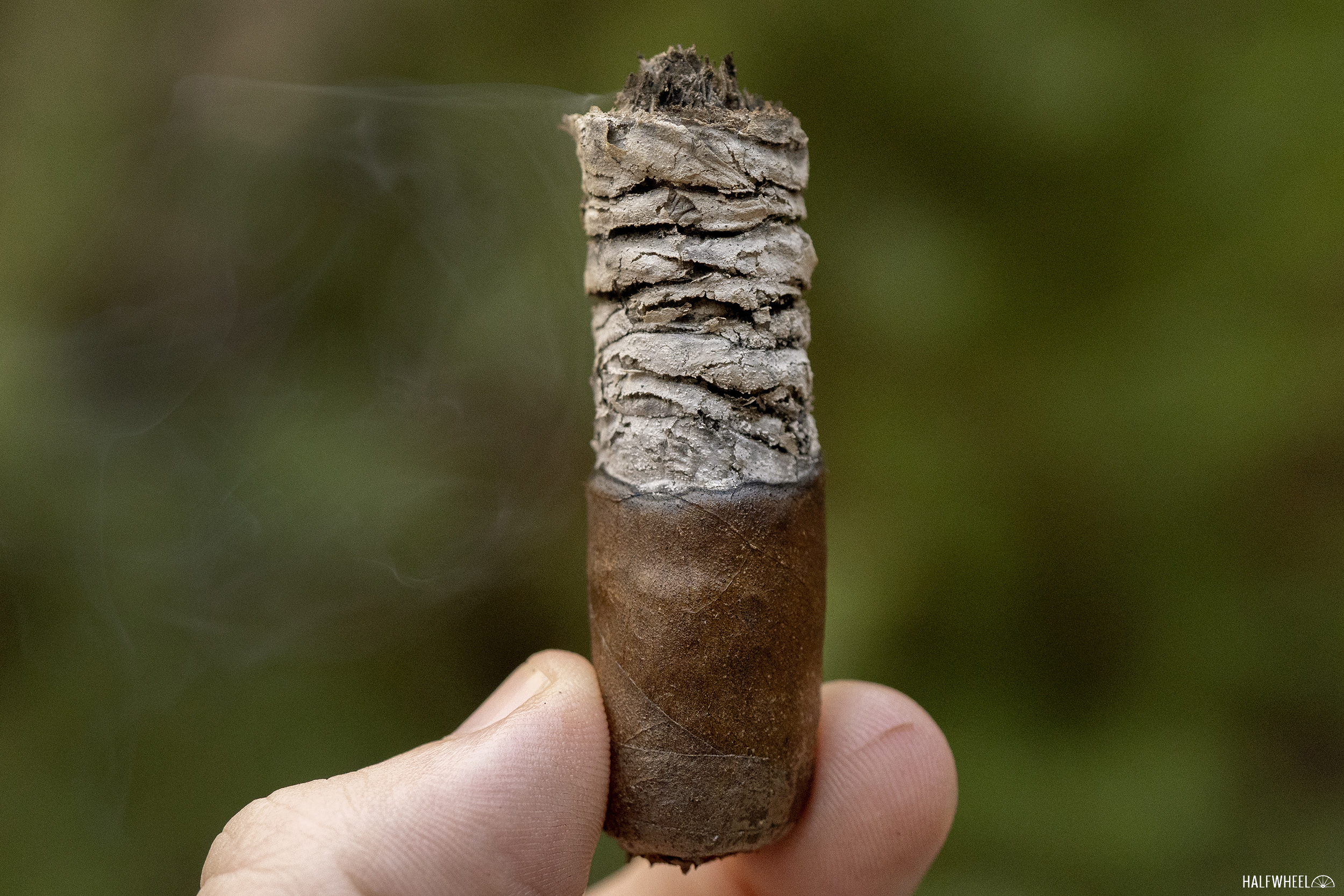 I've long maintained that Perdomo's catalog of cigars offers about as many go-to choices as any, with balanced profiles and good flavors at generally very reasonable prices. The Perdomo Reserve 10th Anniversary Box Pressed Maduro Robusto is no exception to that thought; the cigar delivers a hearty, medium-full profile that dabbles in chocolate sweetness while never straying too far from an earthy core, sprinkling in clean and punchy black pepper throughout. As noted above, the final third brings on a fairly intense level of robustness and mouth-drying flavor, which is fine but had me craving the flavors from the first half that much more. While I might rearrange the profile a bit to bring in that sweetness, there was never a moment where I didn't find myself enjoying what the cigar had to offer, and it left me with a clean finish on my palate and thankfully no nicotine buzz. Another solid entry into the Perdomo portfolio that is worth trying if you're up for something with some bigger flavors.