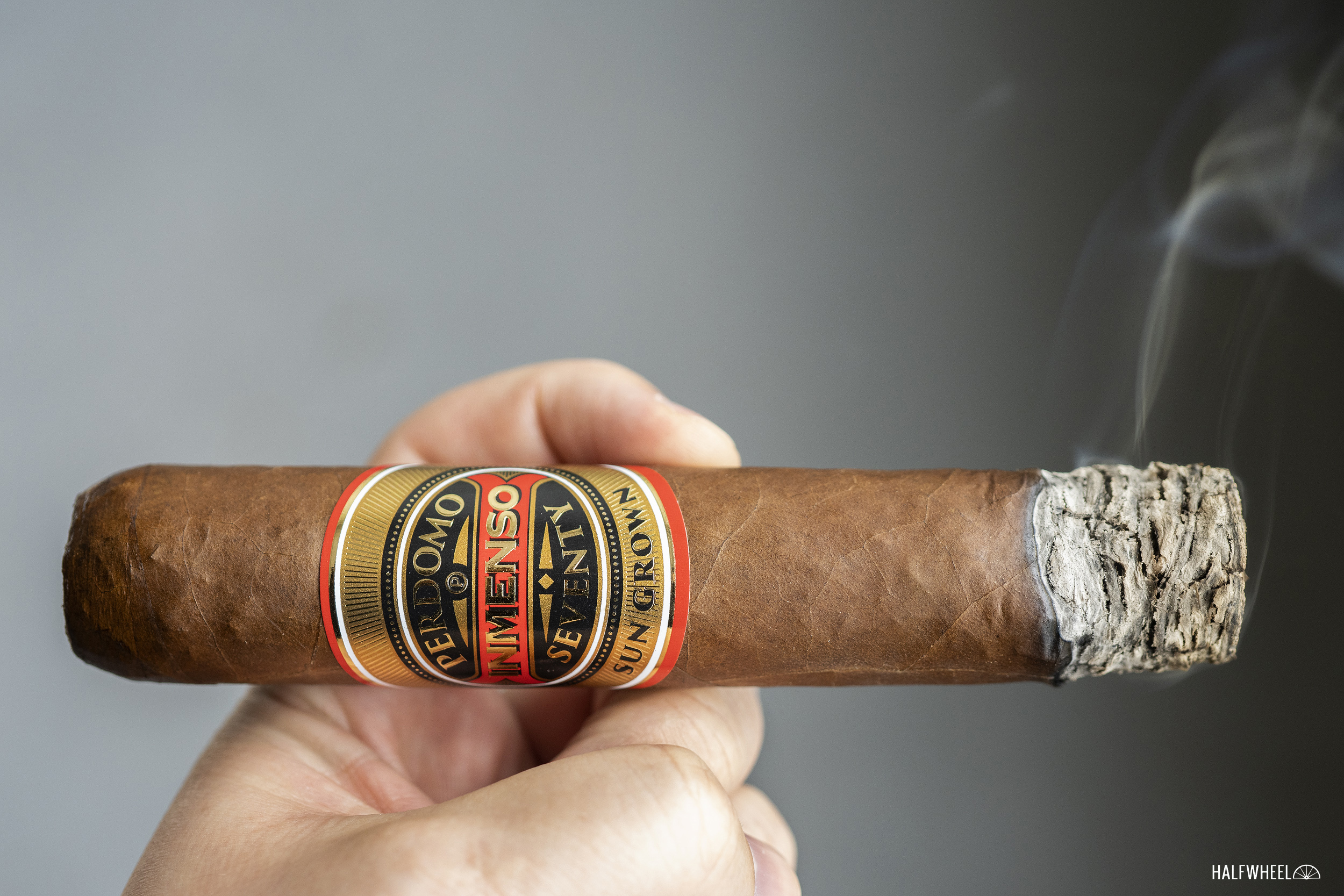 The way we approach reviews at halfwheel means sometimes a reviewer gets cigars that he probably would buy as a consumer and sometimes he ends up tasked with smoking three cigars he would never otherwise considering purchasing.

Today’s review is the latter.

Last month, Perdomo began shipping two new lines of cigars called Perdomo Inmenso Seventy. Unfortunately for someone like me, who enjoys more traditional sizes, this isn’t the 70th anniversary of Perdomo, which means that the Seventy in the name is a reference to the size of the cigars, specifically the ring gauge.

The Inmenso is offered in two different wrappers, both sold in the same three sizes. Each cigar is a Nicaraguan puro that uses a Cuban-seed wrapper that the company says has been aged for five years. One option is a milk chocolate color used for the Sun Grown, while the other is a darker brown color that is sold as the Maduro. 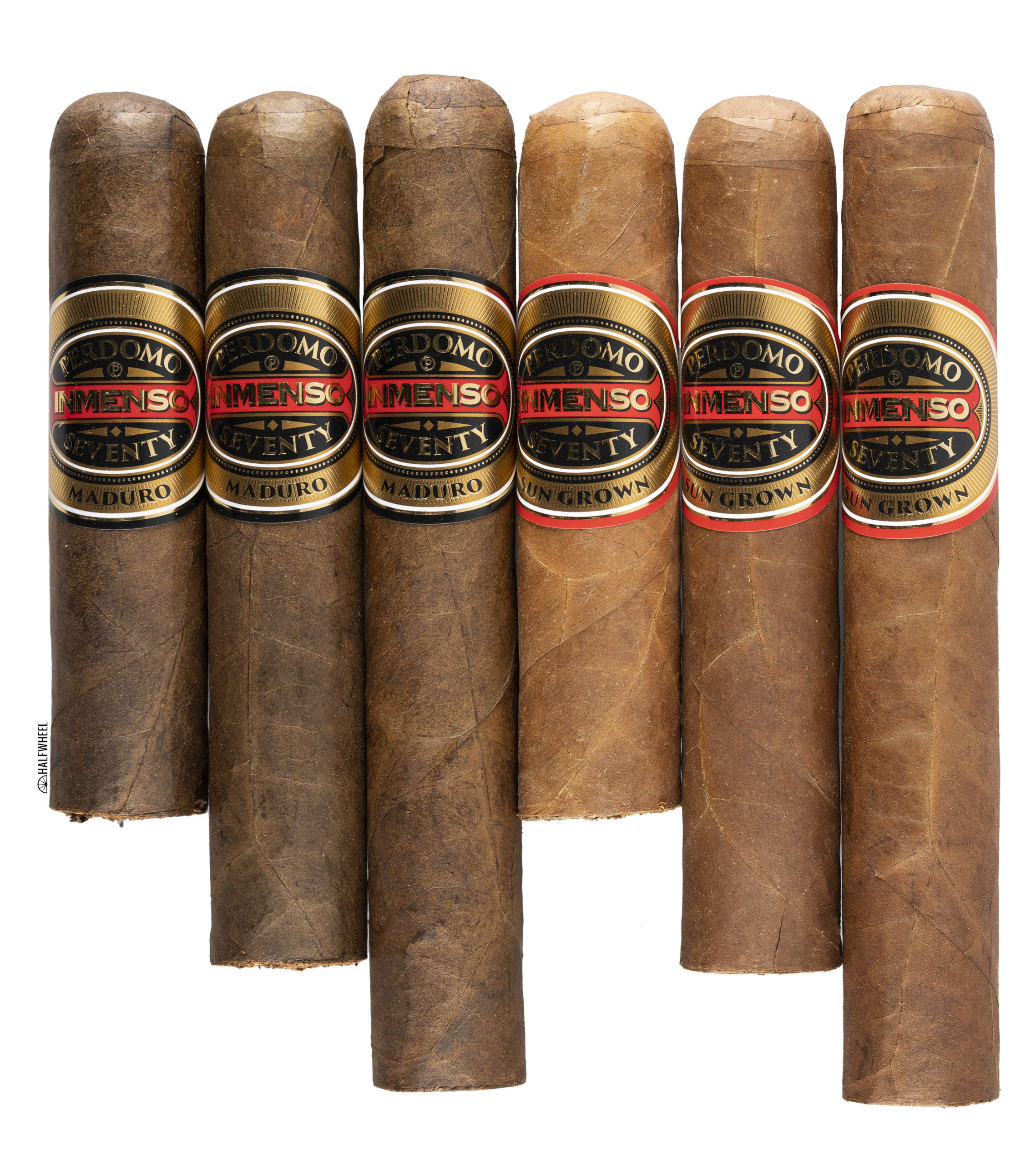 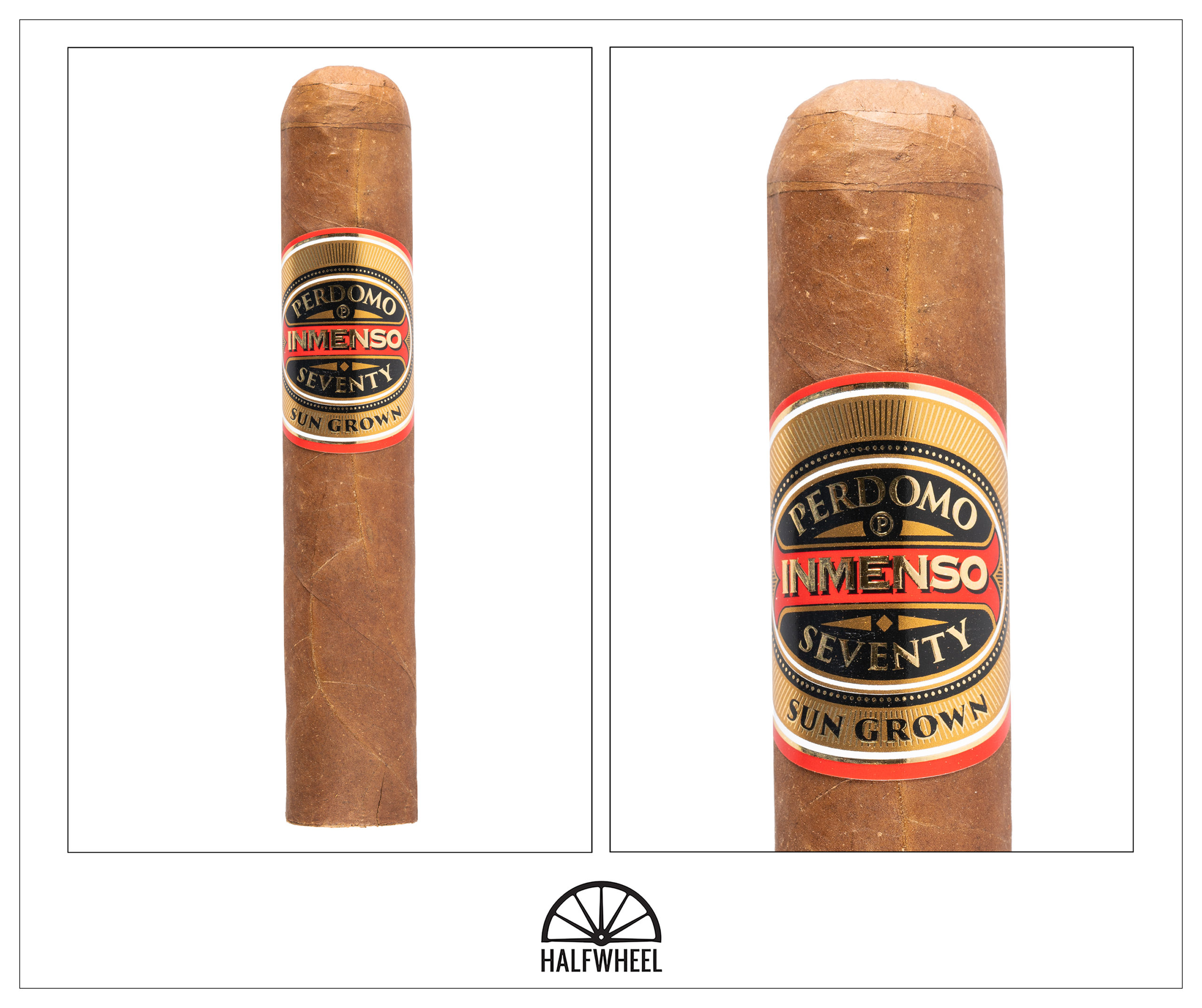 While this is a massive cigar, it seems to have the proportions of a robusto in regards to the cigar’s size compared to the band. The press photos distributed by Perdomo showed a red wrapper, the cigars that we purchased are milk chocolate in color. Each of the three cigars seems tightly rolled and two cigars have noticeable hard spots. The aroma from the wrapper has leather, barnyard and some acidity, altogether around medium-plus. The foot is sweeter thanks to some chocolate, which is joined by the scent of freshly-varnished wood and leather. Cold draws are also sweet, dominated by a combination of flavors that reminds me of an oatmeal cookie. The medium-full profile also has leather, white pepper and a berry finish. All three cigars have draws that are tighter than I would expect for this size, albeit, nowhere close to being too tight.

The Perdomo Inmenso Seventy Sun Grown Epicure begins with toastiness, leather and cedar. It’s a pretty basic profile, but there’s nothing wrong with it. Eventually, the profile thickens and creates a more dynamic mixture. Cedar is the primary part of the profile, followed by nuttiness and black pepper. While the main flavor is thick and has the nuttiness, I’m not sure I’d describe it as smooth. The finish is smoother thanks to nuttiness and buttermilk, but there’s also meatiness and some black pepper, the latter of which really sticks on the back of the throat. Retrohales have creaminess, leather, acidic earthiness and a mild amount of pepper. There’s a rubber-like flavor on one sample, though I don’t find it on the other two. While the finishes of the retrohales have creaminess, I wish there was more sweetness. Cedar and leather round out the lasting effects of the retrohales, though both are noticeably secondary flavors compared to the creaminess. Flavor is medium-full, body is medium-plus and strength is medium. Each sample needs a touch-up to correct an uneven burn, though the smoke production was never an issue. The draw doesn’t loosen at all, which I imagine means it’s tight compared to most 70 ring gauge cigars.

Keeping with the theme of classic and inoffensive cigar flavors, the second third of the Inmenso Sun Grown shifts to a profile of earthiness, leather, saltiness and bits of white pepper. It finishes with minerals, meatiness, lemon and peanut shells. The white pepper from before has transformed a lot, now sticking in my mouth for a couple of minutes after each puff. Retrohales have lots of peanuts over leather, saltiness and some lemon. Once again, the white pepper plays a role in the rertrohale’s finish, now joined by grains, earthiness and a bit of meatiness. Flavor is close to full, body is medium-plus and strength is medium. Two of the Perdomo Inmensos require touch-ups in the second third, once again a need to correct an uneven burn. The cedar returns to lead the profile in the final third. Things are decidedly toastier, particularly as the cigar burns down, but otherwise, it’s pretty similar. Two samples have a bit less white pepper than before, but it’s still there in earnest. The finish of the Perdomo Inmenso Seventy Sun Grown Epicure has toastiness over nuttiness, damp earth, and then healthy doses of both black pepper and white pepper. Finally, the retrohales provide some sweetness. It comes via some generic barbecue sauce notes, which is good enough for me. There’s also nuttiness and leather. While there isn’t much white pepper while the smoke is in my olfactory, once it has left, I can feel the burning sensation begin. There is also some grains, nuttiness and leather. Flavor is close to full, body is medium-plus and strength is medium-plus. None of the cigars have an obvious need for a touch-up in the final third, though I imagine most people will find themselves using the lighter to help get the smoke production back to its previous levels. It’s still fine, but it’s not at the smokestack levels from before. While I would have likely never considered purchasing this cigar except for the purposes of reviewing it, I’m not opposed to its flavor profile. The list of flavors found here is one that is a fairly classic bunch of sensations many people find in cigars. If this profile was offered in more normal sizes, this is the type of cigar that I think every new smoker should experience. It’s elementary, easy to handle, and pretty clean. That being said, the thing that stands out is the size; while it's not for me it's probably the main reason why most people will end up buying the cigar.