Over the past few year or so, PDR Cigars has been releasing a series of limited production cigars made exclusively for Thompson Cigar in Tampa, Fla., all of which use the word dark in the name.

In December 2014, the Pinar Del Rio Dark Harvest 2012 San Andrés was released, followed in September 2015 by the Dark Harvest CT, which swapped the San Andrés maduro wrapper for an Ecuadorian Connecticut. In January, the pair announced the third installment in the series, the PDR Dark Harvest Exclusive Toro Reserve Habano 2013, which uses an Ecuadorian habano wrapper over a mixture of Nicaraguan fillers from Condega and Pennsylvania broadleaf. 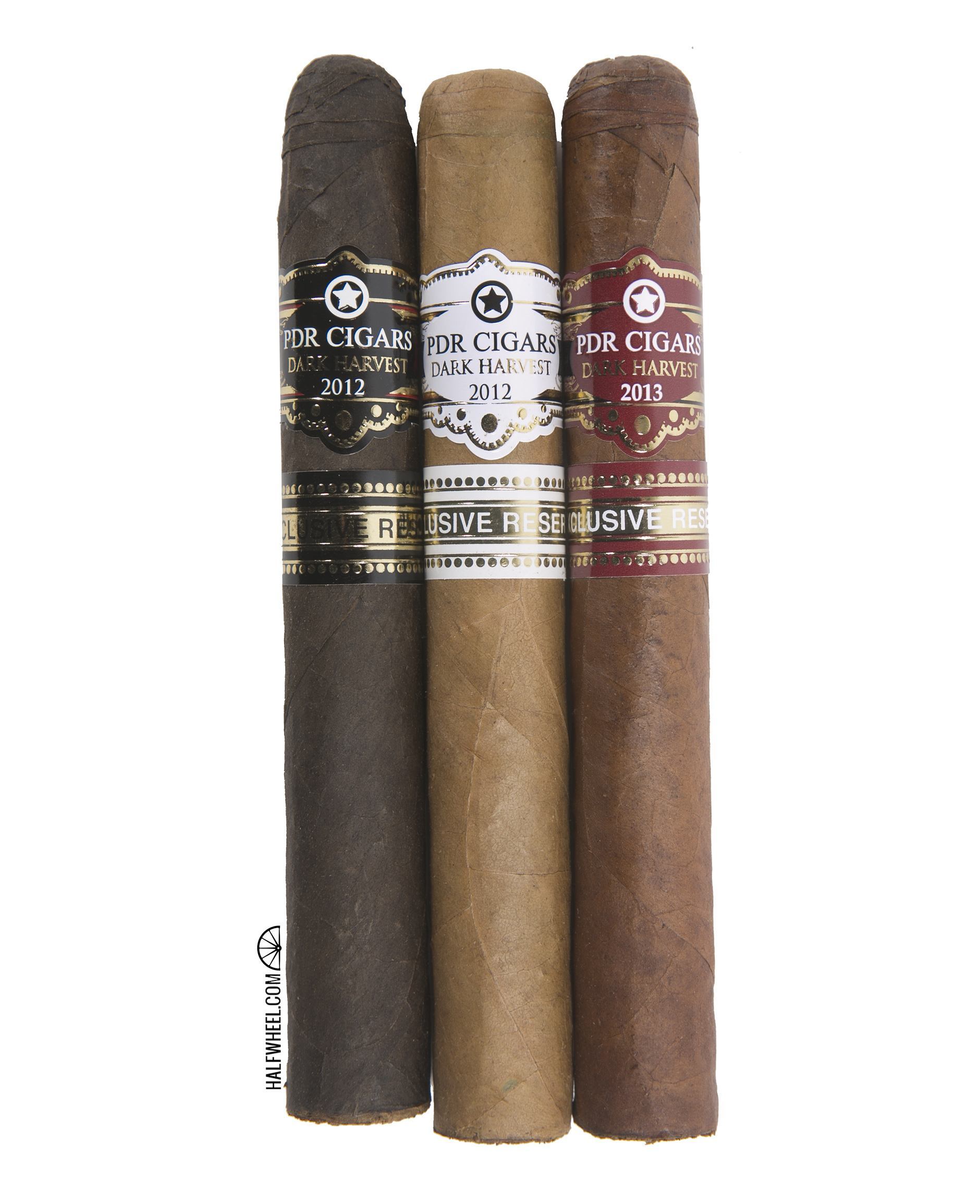 Just like the first two releases, the Habano comes in a 6 x 52 toro vitola and will be an ongoing production release though limited in terms of production at any one time. It also shares the same price: $8.75 for a single stick or a ten-count box for $49.95. 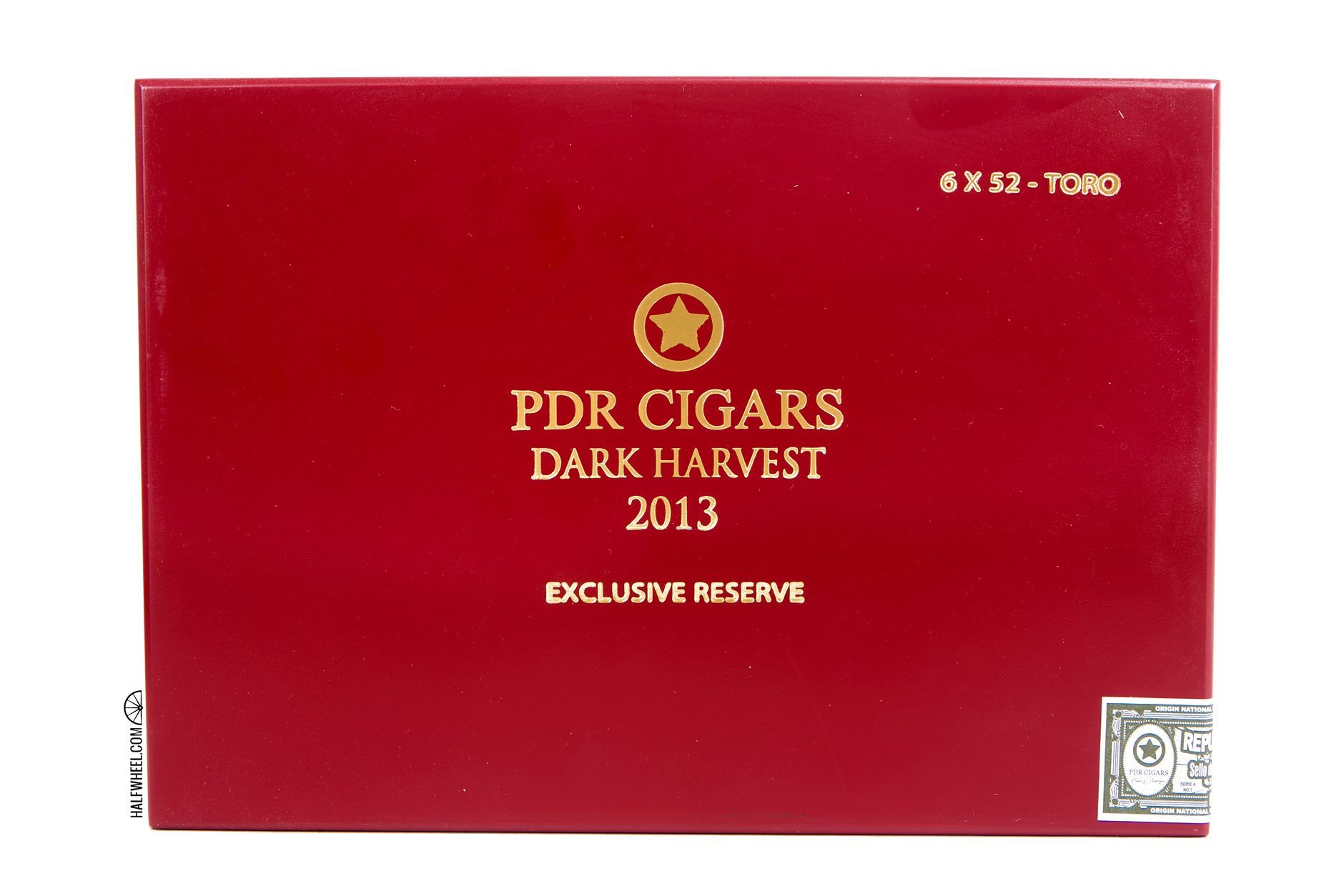 When the original Dark Harvest was released, Thompson Cigars’ director of catalog merchandising, Chris Szeglowski, told halfwheel that the goal of the series was “to create a premium line using high grade tobaccos, opposed to just a value priced private label.” For a cigar bearing the name Dark Harvest, this offering from PDR Cigars doesn’t sport quite as dark of a wrapper as I might have expected, though with the mottling there are some spots that are fairly dark. The Ecuadorian habano capa has a slightly oily sheen and a reddish brown hue to it, attractive at its best spots and a bit rough at its worst. Firmness is decent and consistent, while the caps are a bit sloppy and miscut. The aroma from the foot has a generic fruit sweetness to it that seems to get hampered by the dry tobacco note behind it but still manages to show a midpoint of cherries in syrup and fresh blackberries with varying touch of pepper. The cold draw on the first cigar is very open while the others not so much, offering a variation on the sweetness and tobacco combination, with cherry as the most distinct flavor.

For as much sweetness as there was prior to lighting the cigar, there’s none of it once the Dark Harvest Habano gets burning as black pepper generally leads the way. There’s a bit of a dry tobacco bite in the first puffs of the cigar that elicits more of a physical reaction on the tongue than one of flavor. A bit of saucy tang comes along fairly quickly as smoke billows off the foot of the cigar; rooted in a damp wood flavor it begins to show traces of spice but also wants to dry out the palate. Touches of chalk enter as the first clump of ash builds up to an inch in length, further drying the palate out via mouthfuls of smoke and in one sample helping to create a sharp edge in both the nose and mouth. While there are a few moments of sweetness it the first third, they tend to be fairly fleeting, but are enjoyable when they do appear. The cigar doesn’t really push any flavors onto the palate until the end of the first third, when a bit of dry, robust and peppery smoke becomes the offering of the moment, with a respectable amount of pepper for the nose. At the midpoint, the cigar is still offering a dry profile that almost sucks moisture out of the tongue and lips. Flavor-wise, chalk is still present along with a very subtle dried apple sweetness and a bit of white pepper. There is a bit of a shift in the aroma at this point as well, as it picks up a saucy sweetness that has me thinking of some kind of glaze for pork. There’s a bit of spice to it and a combination of seasonings that challenge the nose with complexity. Combustion becomes a slight issue in this portion, as the cigar is fairly quick to go out while resting in the ashtray. The burn line also shows some struggles, as in the more mottled samples it seems to run into portions of the wrapper it just can’t get through without the help of a touch-up. An underlying chalk flavor carries the cigar into its final third, while the burn line remains a bit wavy but smoke production never suffers. Instead of the flavor continuing to build or evolve forward heading into the final third, it seems to be regressing, layer by layer, until it’s an echo of its former relative complexity. While the white pepper does a decent job at hanging on, the wood and tangy spice start to disappear, and the overall body of the smoke thins out quite noticeable by the time there is just under two inches left. Strength has backed off as well, as while it was never a nicotine powerhouse, it is now a good bit less than what it was in the second third. The draw remains decent and smoke production is still above average, but I feel like I’m grasping at flavors before they disappear completely via this current vicissitude. The burn line doesn’t want to close out on a strong note, returning to its wavy behavior once again, but thankfully the heat doesn’t affect the flavor and it can be smoked down to about an inch in length, with a bit of black pepper returning on top of some bubblegum sweetness and that agitation provided by the former in the eyes being what results in the cigar being laid to rest. The PDR Dark Harvest Exclusive Toro Reserve Habano 2013 certainly has some good qualities; it can be a good looking cigar that delivers a flavorful smoke for most of its two hours, though the constant drying out of the mouth is one thing that will stick with me as a downfall of this cigar. Add on some inconsistency from sample to sample and I can’t say I’d feel confident picking another one of these up and knowing exactly what I’m going to get, which also factors into a bit of ambivalence towards this stick. Thankfully there are no serious negatives in this stick, as both balance and burn stayed fairly even and the flavors are for the most part very palatable. A respectable offering that certainly makes for a good humidor filler when purchased at the box price.