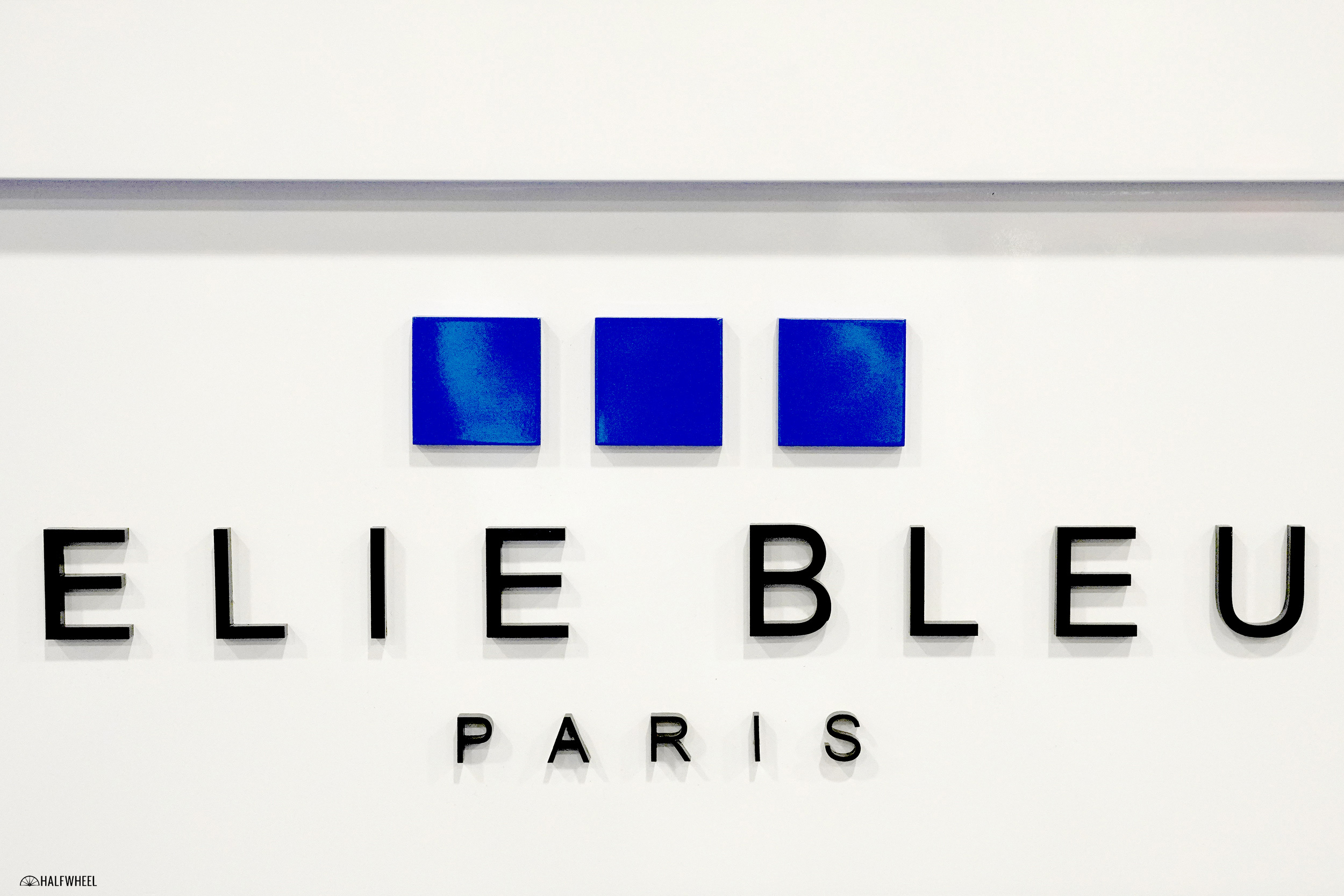 Every year people will ask me a pretty basic question, “what have you smoked (at the trade show) that you like?” Each time, I reply with the same answer, “I don’t really smoke cigars at the trade show.” Given all of the equipment we carry and the rushed nature of going from booth to booth, I gave up on trying to smoke cigars on the show floor many years ago. So after I explain that I haven’t smoked any of the new cigars they were hoping to get opinions about, I usually tell them about the accessory that caught my eye the most. This year, it’s from Elie Bleu.

The Elie Bleu booth is actually the Rëyns International booth, which is the company’s U.S. distributor. It’s the same as it has been for quite some time: a great deep blue color with lots of high gloss white displays. While the LED lights used in the cabinets are bright and make the booth stand out from a pretty far distance, it’s not the best for photographing the items inside. 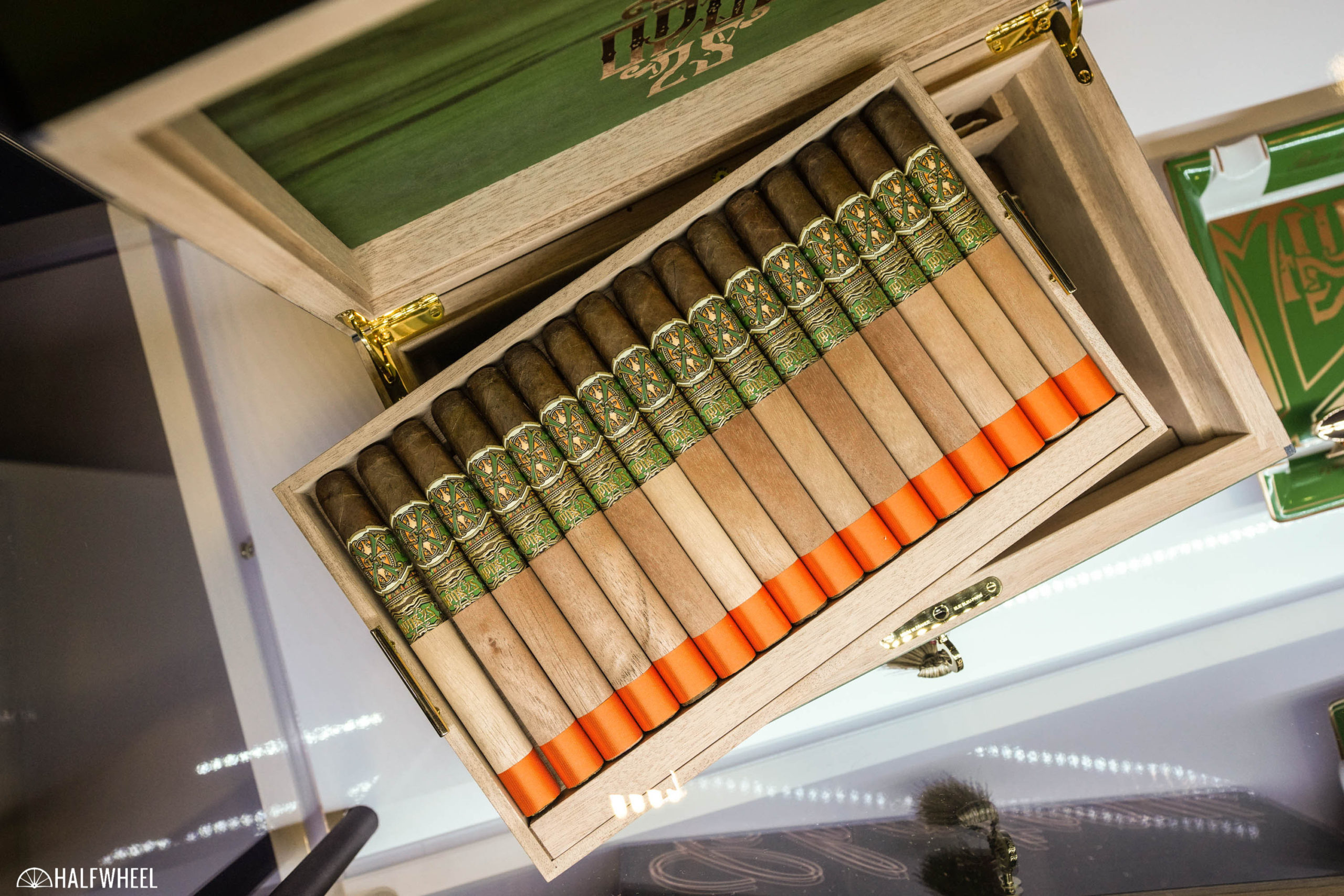 The undisputed star of the booth is the new collection that pays tribute to the 25th anniversary of Fuente Fuente OpusX. Most notably, there’s a humidor that contains 25 Fuente Fuente OpusX 25 cigars, which weren’t in the Fuente booth. I didn’t bother asking Carlos “Carlito” Fuente Jr. what the blend for the cigar is, whenever Fuente—both the company and family—wants the world to know, we will know. As I alluded to in my Arturo Fuente booth write-up, this is an item that more or less no one in the Fuente booth knew about until they arrived in Las Vegas. 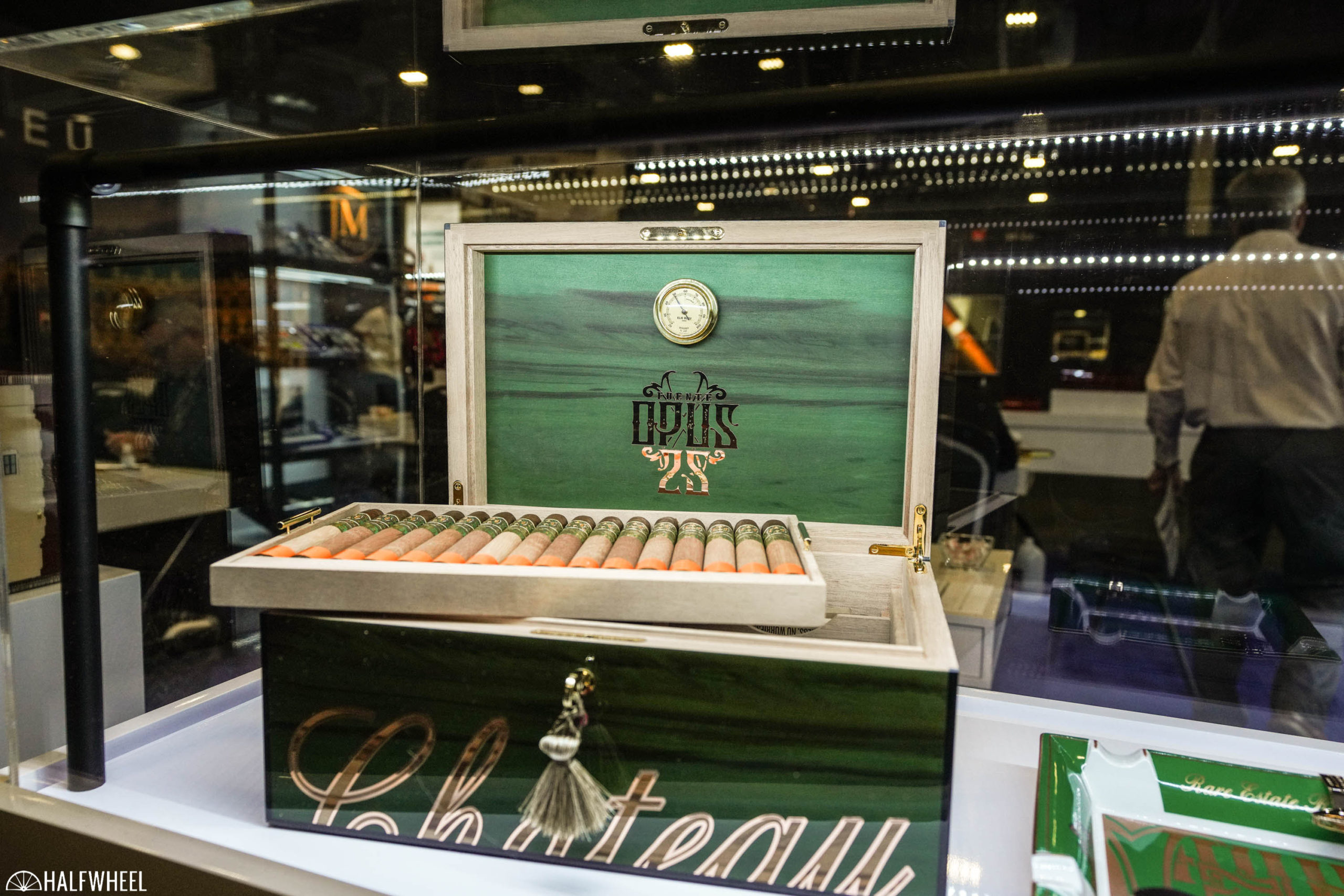 Each humidor includes 25 Fuente Fuente OpusX 25 cigars, measuring 7 x 50. I have no idea whether the cigars will be sold outside of the humidors because (virtually) no one in the Fuente booth knew these were a thing until Thursday. 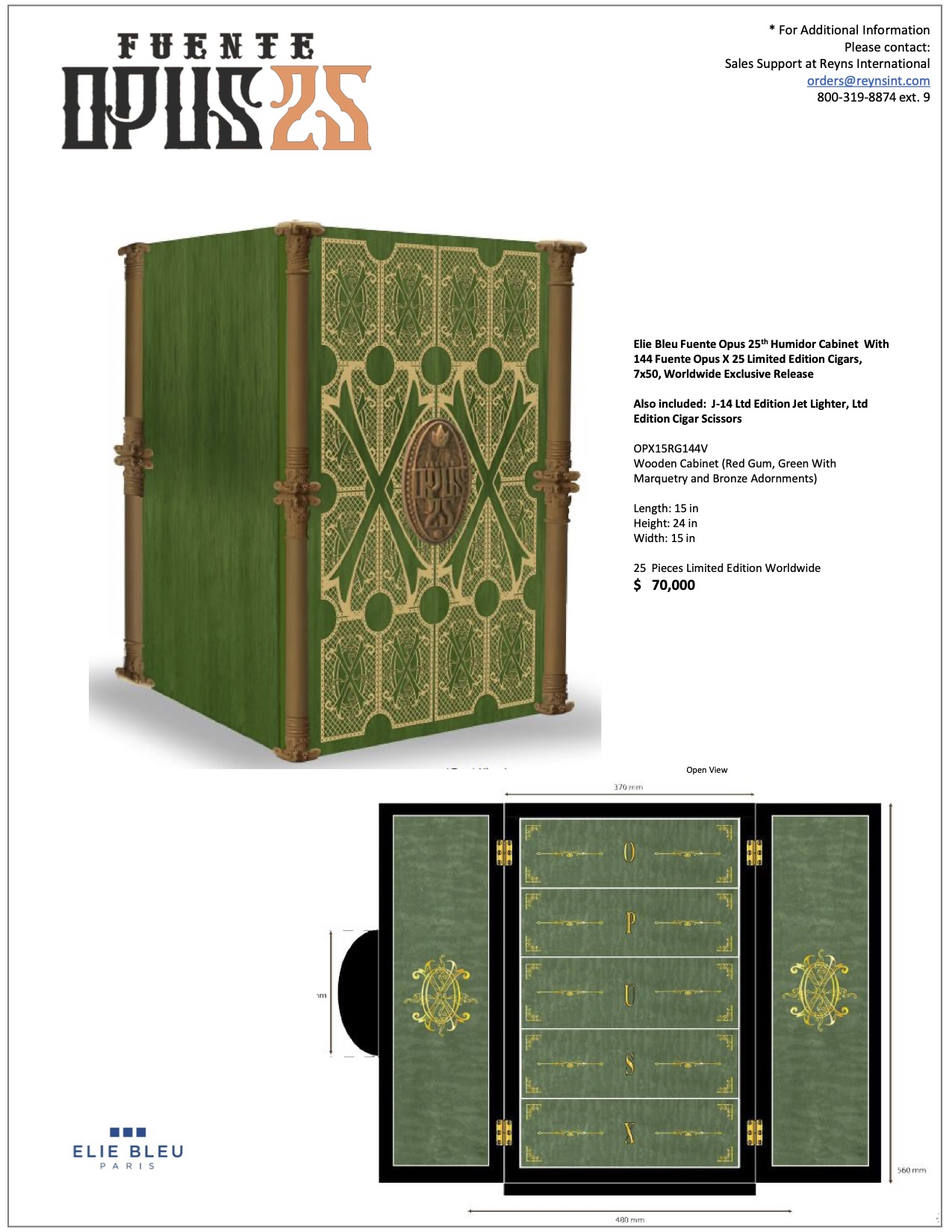 If that wasn’t enough, there’s a planned cabinet humidor that will include 144 Fuente Fuente OpusX 25 cigars along with the Elie Bleu OpusX 25th accessories (lighter and cigar scissors). It measures 24 inches tall x 15 inches in length and 15 inches in width. It isn’t in Las Vegas, which is a real shame.

The woods used are red gum with marquetry and bronze accents.

At $70,000, making it one of the most expensive non-Cuban cigar releases ever sold at retail. This is a four-cigar ashtray that measures 9 inches x 9 x 2. It is made in Limoges, France out of the city’s famed porcelain. Each ashtray comes with two rose gold bridges that can be moved alongside the ashtray as you smoke down your cigar. If you are trying to save pennies, the El Azul and El Rojo ashtrays are the same size but $30 less expensive, though if you are trying to save pennies at the Elie Bleu booth buying OpusX accessories, what are you doing with your life? Functionally, these seem pretty similar to the Elie Bleu cigar scissors that you can buy for around $250. They are a lot longer and, obviously, a lot more detailed thanks to the OpusX branding. It uses stainless steel for both the blade and body, while the handles are rose gold. Elie Bleu’s J-14 torch lighter is also part of the collection, actually the most affordable piece in the series. This lighter looks like a soft flame lighter but actually features a single-flame jet torch. Brian Burt has been using the J-14 lighter all week here, though not an OpusX-branded version. The ongoing Casa Cubana series, which is a series of humidors painted to look like buildings in Havana, has one of its more interesting releases: The Theater. It measures 12.6 inches x 10.63 x 9.25. This series has always had some playful details, you can see some posters on the bottom levels for example, and is super impressive. From what I understand there’s at least one collector who has tried to buy every piece in the collection. If that’s the case, that person has bought multiple full-size houses worth of Elie Bleu humidors. Elie Bleu’s ongoing series of gun-themed humidors gets another new piece this year. This is the first time the company has used this teal color for the series, but my favorite part is the bullet key in front, which of course isn’t on the humidor in the picture above. This is that piece that I was telling everyone about. From the outside, it looks like a nice humidor, but nothing special from Elie Bleu. But once the humidor is open, the inside reveals itself to also be made from olive wood, which is a first for the company. The patterns aren’t identical, but the interior is strikingly different than every other humidor inside of the booth. What’s most surprising is that it’s not that expensive for an Elie Bleu humidor. I was actually a bit surprised to open the humidor and not see a price of at least $4,500. This humidor is made from sycamore and red gum with the stand-out feature being the continuation of the image down the front of the body. The humidor measures 15.75 inches x 10.63 x 4.41. It is rated to hold 110 cigars. We are planning on reviewing an Elie Bleu humidor and this might be it. I’ve been trying to figure out which color I like the best, and to some degree, this solves the problem. It doesn’t produce as much contrast as some of the company’s humidors, but I was more impressed with it seeing it in person. It measures 15.75 inches x 10.63 x 4.41 and is rated to hold 110 cigars.

Because I had seen this on Elie Bleu’s website earlier this year, I didn’t take a picture of it thinking it wasn’t new. Of note, Elie Bleu has another version of a rainbow humidor before, but this one features the multi-color pattern in full-length—the old one just used it for the lid—and the stripes are horizontal now instead of vertical. It’s a new pocket-friendly double guillotine cigar cutter from Elie Bleu. Push the logo button down and the top piece opens up. The blades are made from “surgical stainless steel” and Elie Bleu is offering an optional $60 leather case. This is a new lighter from Elie Bleu, which uses an ignition system triggered by opening the cap. it features a fuel window and a single flame. There’s an optional leather case that is offered for $60. 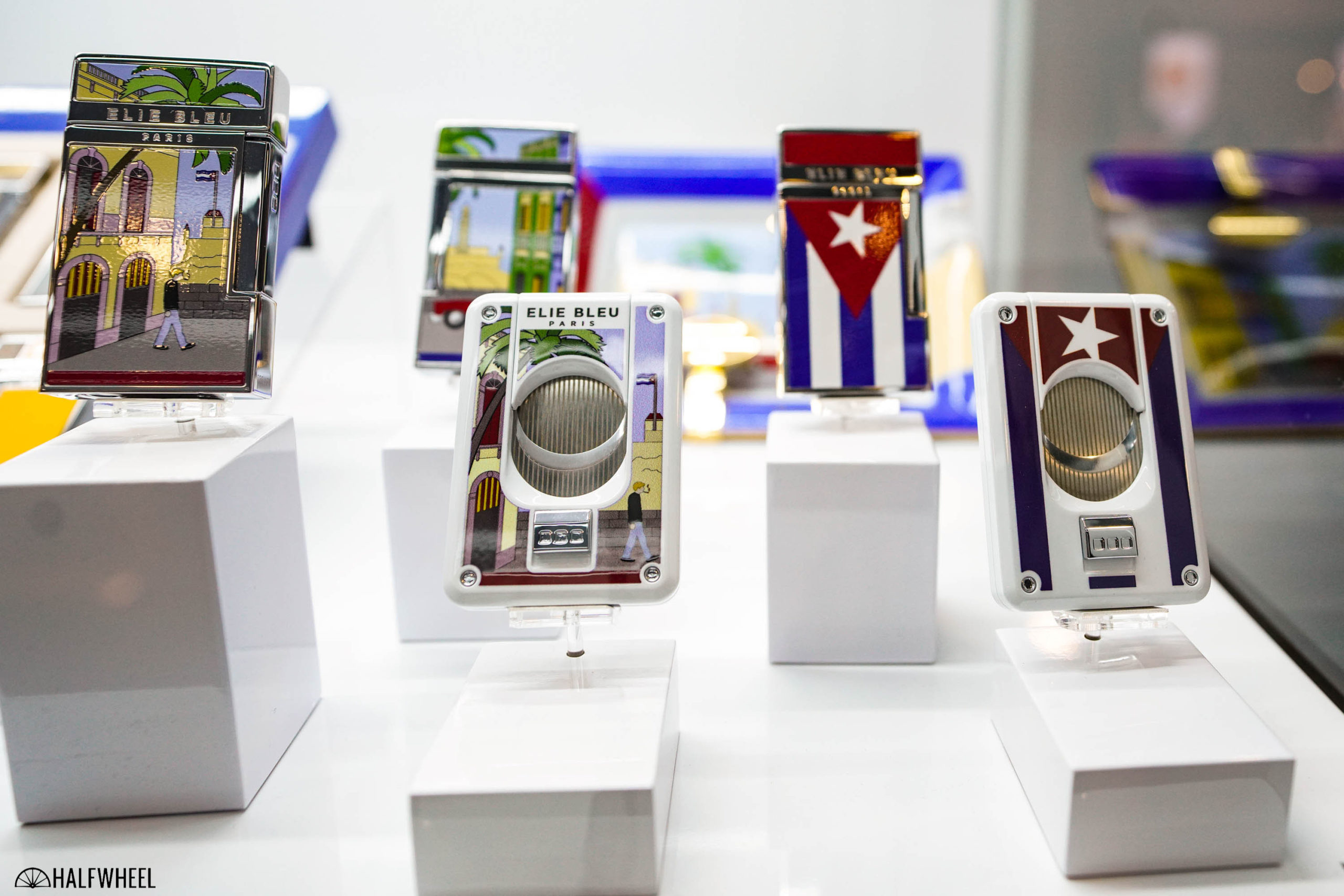 The J-14 lighter is also getting a limited edition colorway as part of the Casa Cubana series, as well as a new Cuban Flag series. I covered nearly every OpusX Society item in the Manny Iriarte Enterprises booth write-up, but the Elie Bleu items for this collection are featured in both booths. The one thing(s) I didn’t cover before are these Limoges porcelain ashtrays. There are two different colors: El Azul (blue) and El Rojo (red). They measure 9 inches x 9 x 2. One note, these are said to be the first time that the factory in Limoges has made this ashtray with four stirrups. Each color is limited to 50 pieces.