In 1990, Paul Garmarian not only introduced his first line of cigars at Georgetown Tobacco in Washington, D.C., but also published a book, The Gourmet Guide to Cigars. Sometime after his cigars began to sell nationally in 1991, Garmarian began producing cigar accessories, including lighters, leather cases, ashtrays and cigar cutters. 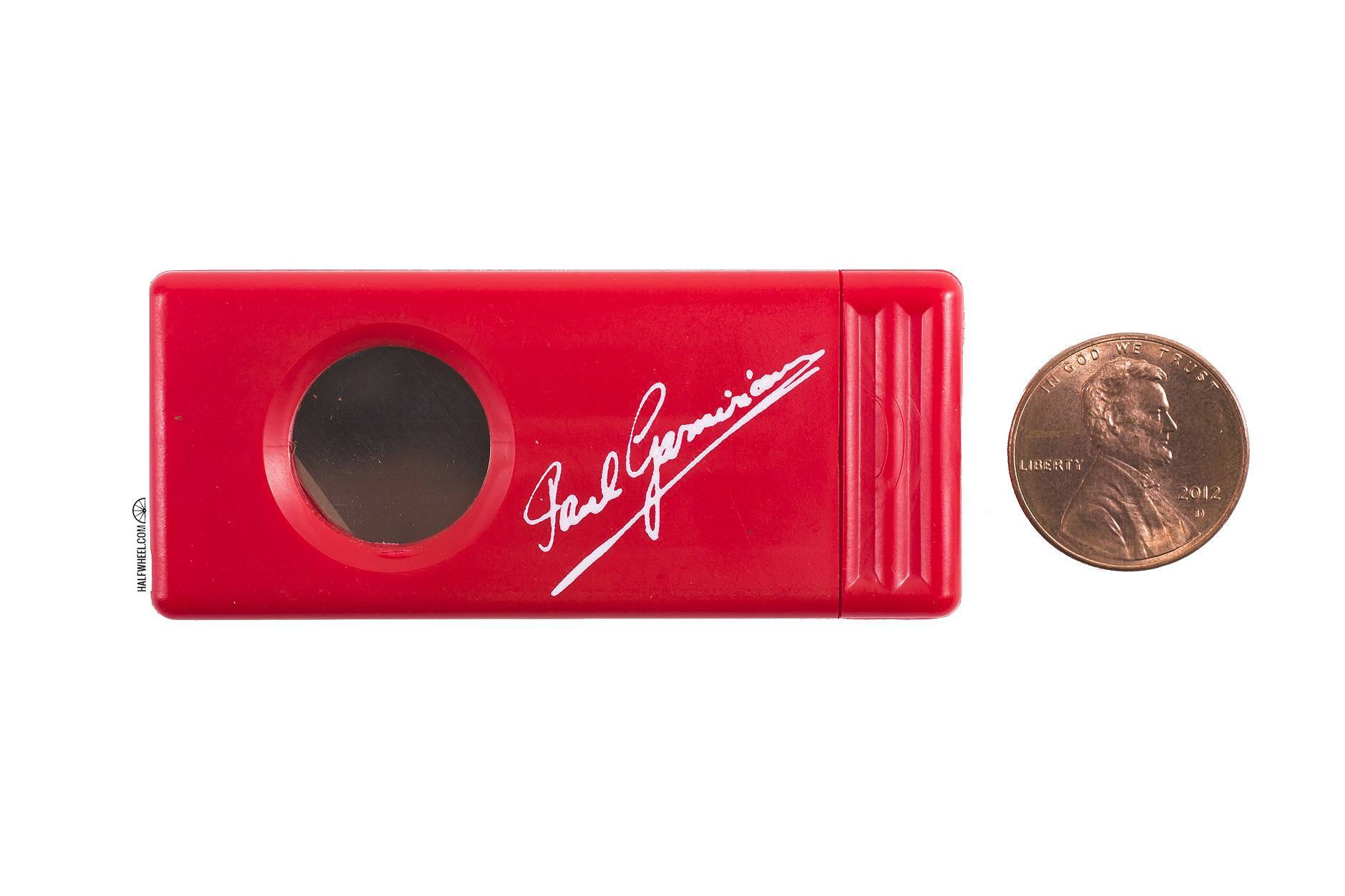 The Paul Garmarian cutter is one of those accessories, available in seven standard colors, each retailing for the same $20: Black, Red, White, Blue, Green, Grey and Maroon. All of them are made in Sheffield, England and the opening can cut cigars up to 48 ring gauge.

The Paul Garmarian website has a bit more information:

Manufactured in England with precision engineering, the durable Sheffield blade is machined to 1/1000th of an inch, is crimped into position by hand, and the case is sonic welded thus producing an extremely sharp, precise and smooth cut.

In addition to the plastic version I am reviewing, Paul Garmarian produced a Super Cigar Cutter that was made out of aircraft aluminum, anodized in Holland and build by hand in England. According to an interview in the Daily Caller, only 2,000 of the cutters were produced over an eight year period, and they have not been produced since 1999. In terms of physical appearance, the Paul Garmarian cutter is quite small as well as quite thin, measuring only 2 3/4 inches long, 1 1/4 inches wide and only about 3mm thick. Unlike quite a few of the cutters that I have reviewed, it is obviously more of a utilitarian item, with an exterior made entirely of plastic and a stamp of Garmarian’s signature on one side. There are no handles for fingers; instead, the one side of the cutter is moved back and forth on a track in a very simple operation. The blade is not straight, and is in fact angled to cut cigars diagonally, which helps to keep the tearing of the cap to a minimum. Interestingly, while there are obviously some disadvantages to this particular cutter that we will get to below, there is one thing I can say for certain: it is by far the sharpest cutter I have reviewed, and by a considerable margin. The blade cut through the cap of each and very cigar I used it on with ease, like cutting butter with a hot knife, and at no time did it tear the wrapper or leave anything close to a burr. In addition, the puny size of the cutter makes it easy to carry around, as it does not take up that much space at all. Operation-wise, the Paul Garmarian cutter performed quite well every time I used it, although there were some issues that arose after continual use. The actual cutting action of the blade is nowhere close to smooth, and it takes two hands to open the cutter, although you can actually cut the cigar by using just one hand. The small size of the cutter meant that I had some issues at various times with exactly how to hold and cut cigars at the same time, and while it got easier the more I used it, the operation never became something that I could do without thinking about it. Despite the small hole that this cutter has, I was able to cut about half of the cigars that I wanted to and get a cut I enjoyed, although some of the larger ring gauges I could only get a small amount of the cap, making this cutter essentially worthless for those specific cigars. Having said the above, there is one ingenious feature that I was unaware of when I was first using this cutter that I really grew to love as I  used it more and more. The blade of the cutter does does not disappear all the way into the housing; in fact, there is about a 1.5mm gap of space left. The purpose of this soon became clear: every time you cut a cap, the cut piece of tobacco is actually held in place at the end of the action, allowing you to pluck it out and throw it away at your leisure, instead of having it fall anywhere so that you have to clean it up. This worked every single time I cut with this cutter, regardless of the size of the cap or the type of wrapper I was cutting.

Of course, there are disadvantages to the cutter as well, some of which are quite significant. First and foremost is that it cannot handle many larger cigars of the modern U.S. market. In addition, the actual act of cutting can be problematic, due mostly to the diminutive size of the product relative to the large size of your hand and fingers, which can make it awkward to use at certain times. There is also the fact that the small size makes the cutter extremely easy to misplace if you have it in a bag with any sort of other products, as it tends to slip to the very bottom of whatever bag are you carrying it in. In terms of competition, there are no cutters that have the specific combination of size, materials and blade, but there are a multitude that are similar. Perhaps the most well known is the Xikar Xi Ultra Slim, a guillotine cutter that is about double the size of the Paul Garmarian, and made entirely of stainless steel, can cut up to 64 ring gauge cigars and retails for just under $75. Davidoff sells a Zino branded guillotine cutter, but it is square and made entirely of stainless steel and titanium, and both cost significantly more than $20. Dunhill makes a stainless steel single blade option, but it is round and retails for over $300. In addition, there are a number of cheap single blade guillotine cutters made of plastic that retail for anywhere from $1.99 up to $5.99 or so, but none of them incorporate the same blade that the Paul Garmarian cutter uses.

After using the Paul Garmarian cutter for more than two months, I have to admit it is a bit of a mixed bag. Extremely sharp, extremely light and extremely small, it is both easy to keep with you as well as easy to lose. While it is not made of overly expensive materials — other than the blade — the cutter is surprisingly durable, and not once during the time that I was using it over two months was I concerned about it breaking or having the blade go dull. In the end, while it is not even close to versatile enough to be my main cutter, the Paul Garmarian Cutter is an option I will use as the ultimate backup: relatively cheap, light and easy to replace if I misplace it.