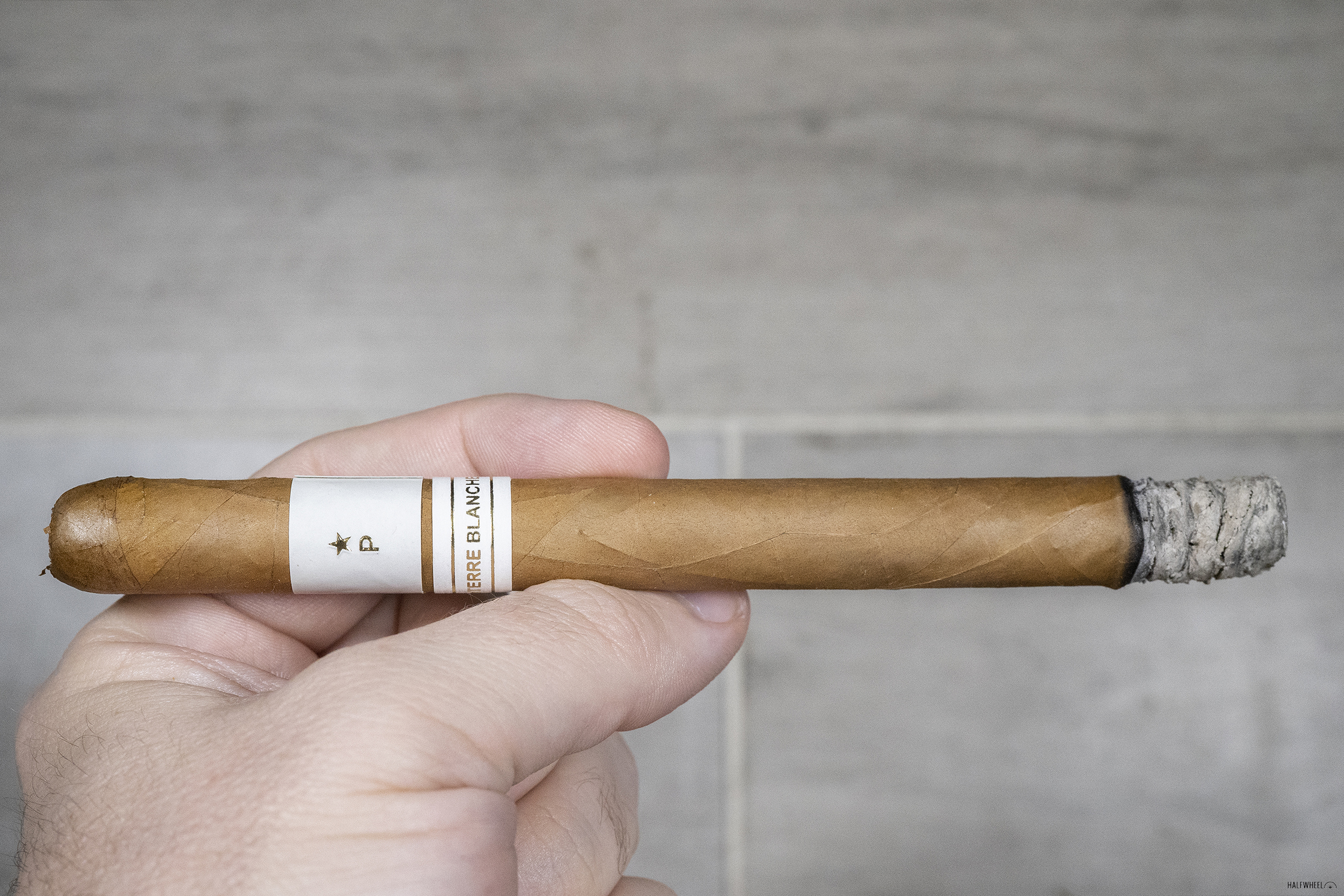 I don’t remember the year, but I was visiting a cigar shop in the Dallas area with my business partner and co-owner of this site, Charlie Minato, and noticed a cigar that was dressed fairly simply, with what I believe was an orange band and a star above a capital P in gold text. It was one of those cigars that I looked at and was immediately intrigued by, as it looked like the band was some kind of code that would fall under the hashtag #IYKYK, meaning if you know, you know.

Regardless of if you know or not, that logo belongs to Patoro, which was founded by Dr. Pablo Richard. What you might not know is that the company was founded just over 20 years ago, but instead of using the anniversary to name the cigar released in its celebration, the company chose to name it for the soils in which some of its tobaccos are grown.

Terre Blanche is Spanish for white earth, which is a reference to the limestone that comes from the erosion in the Cordillera Septentrional, the Northern mountain range in the Dominican Republic, that has made its way to the Cibao Valley, a popular growing region in the country. According to Patoro, the soils in this region are rich with calcium and have a lighter color, hence the new name.

The binder and filler in the Patoro Terre Blanche are tobaccos from the Cibao Valley, both happen to be grown by Leo Reyes, one of the more well-known tobacco growers in the country. After harvest, they are aged for between four and eight years before being rolled and finished off by an Ecuadorian Connecticut wrapper.

The line was launched in November 2021 as an exclusive to Industrial Cigar Co. in Frisco, Texas, debuting with the lancero and gordo. At the 2022 PCA Convention & Trade Show, the company added a robusto vitola as part of its national release.

The new robusto vitola began shipping in July alongside orders from other Patoro Ambassador retailers and other stores for the existing two sizes. The Patoro Terre Blanche Lancero does everything it can to suggest it will be a lighter-bodied profile, between the lightly tanned wrapper leaf and the white and gold bands, a combination that carries with it connotations that this should be a mellower profile. The lightly tanned wrapper has a decent vein structure that catches my attention as well as a generally dry texture on my fingers, though there is one cigar that is waxier than the others. The cigars all appear to be rolled near perfectly, including one of the skinniest twists of tobacco that I have seen on the head of a cigar. Each cigar is rolled to a fairly firm density, and I don’t find any soft spots among the three cigars being smoked for this review. The aroma from the foot has a first aroma of lightly buttered white toast before taking on a bit of dry kindling and a touch of white pepper. It’s a crisp, nose-tinging aroma, but one that departs fairly quickly as it doesn’t have a long finish. The cold draw has a more developed flavor, as it’s now buttered, untoasted bread that has a very soft mouthfeel. There’s not a lot of pepper here, though there is some, with the flavor finishing with a bit of creaminess that coats the taste buds.

A sourdough bread flavor nearly jumps out of the head of the first cigar and onto my taste buds as soon as I take my first puff, and while I don’t want to misstate it, the sour aspect is pretty pronounced. There’s a touch of light white pepper and some creaminess as well, but the sourdough bread flavor is clearly leading the way in this one cigar. It’s much less pronounced in the other two, though the leaf flavor is still rooted in bread. There is a bit of pepper on my first retrohale, but it is not as much as I was expecting given the profile. It’s on par with what the taste buds get, what I’d peg as medium-minus in terms of intensity. For as much as I like sourdough bread, I’m less enthusiastic about the flavor when it comes through on a cigar, so I’m relieved to see it depart after about an inch, which happens to be when I tap the first clump of ash off. The cigar is just a touch creamier, which adds some thickness to the body of the smoke, though one of the three has a powdery texture. A new wood flavor begins to build as the base flavor, while there’s more pepper in the retrohale as this section comes to a close and my nose responds with an increased tingling sensation. In the case of one cigar, the change also includes some dry, almost scorched earth and some black pepper, resulting in a slightly thin but still robust profile. The combination between the flavor on the tongue and the aromas of a retrohale aren’t always a perfect match, but when they do align, the result is very good. Flavor is medium in the first third, body is medium-minus until stepping up right at the end, and strength is mild. The construction and combustion are both very good and problem-free.

While the first third started with sourdough bread, the second third starts with a bit of chalkiness, seemingly an extension of a bit of terroir that has been emerging over the last few puffs. There is still some wood and white pepper, but that terroir flavor is the biggest change, nudging the Patoro Terre Blanche Lancero into its next expression, which is noticeably more vibrant amongst all three cigars. Beyond the evolution of the flavor, the smoke has taken on a new, more pronounced texture. It’s not gritty, but there is about of graininess to it at times, and it makes me realize that the creaminess from earlier is now gone, taking with it the smoothing effect it seems to have had on the smoke. Around the midpoint, there is some evolution to the woodiness that the Patoro Terre Blanche Lancero has offered, and in a few puffs I get the flavor sensation of a fresh box of long wood matches. I also notice that the cigar has been making pretty good pace thus far, never feeling labored, sluggish or uncooperative. I continue to be intrigued by the development and changes in the pepper component, as in this section it makes smaller yet still noticeable changes, increasing and decreasing in intensity but steadily becoming a bigger profile driver. There’s more black pepper as this section comes to a close, and with it, there seems to be an amplification of the smoke’s texture changes that I noted earlier. One cigar also sees the bread from the earlier shift into a warm pretzel flavor and aroma, which is both welcomed and enjoyable. Flavor has ticked up past the medium mark, body is medium, and strength is mild-plus, manageable but strong enough that I’m beginning to feel it. Construction and combustion remain fantastic. 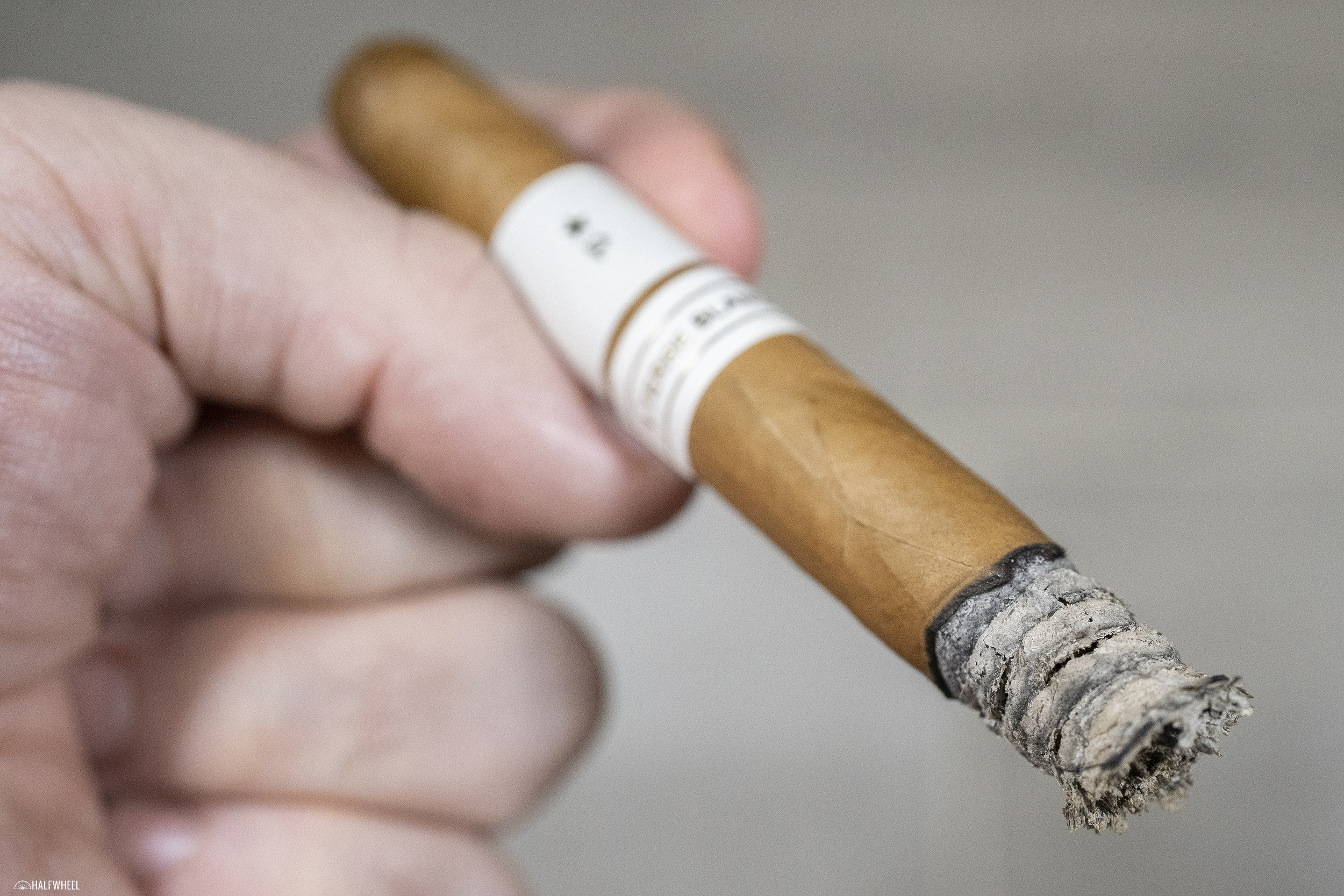 The final third of the Patoro Terre Blanche Lancero sees a bit more of the terroir in the flavor, and while it’s not necessarily increasing in intensity or proportion of the profile, every couple of puffs seems to bring about a bit more of it. The black pepper also continues to tingle the tongue and occasionally irritate the back of my throat just a bit, coloring outside of the lines that I wish it would stay within. One cigar makes a brief revisit to the sourdough bread flavor, though given the way the flavor has evolved, the bread now has less of an influence in the overall profile. While the profile doesn’t turn into a medley of all the flavors that the cigar has offered to this point, there does continue to be some revisits and reshuffling of the individual components, as the wood will step forward and then back off, then the robust earth takes its turn, then pepper, then bread, and then seemingly back to the wood. The final inches sees the flavor get a bit rougher on my palate, as the wood has lost its focus and tastes a bit damp and funky. The final third seems to be the slowest burning of the three main sections, as the cigar appears to be a bit more leisurely with its pacing and eventual deposit into the bottom of the ashtray. Flavor is medium-plus, body is medium and strength is just shy of medium. Construction and combustion remain stellar. 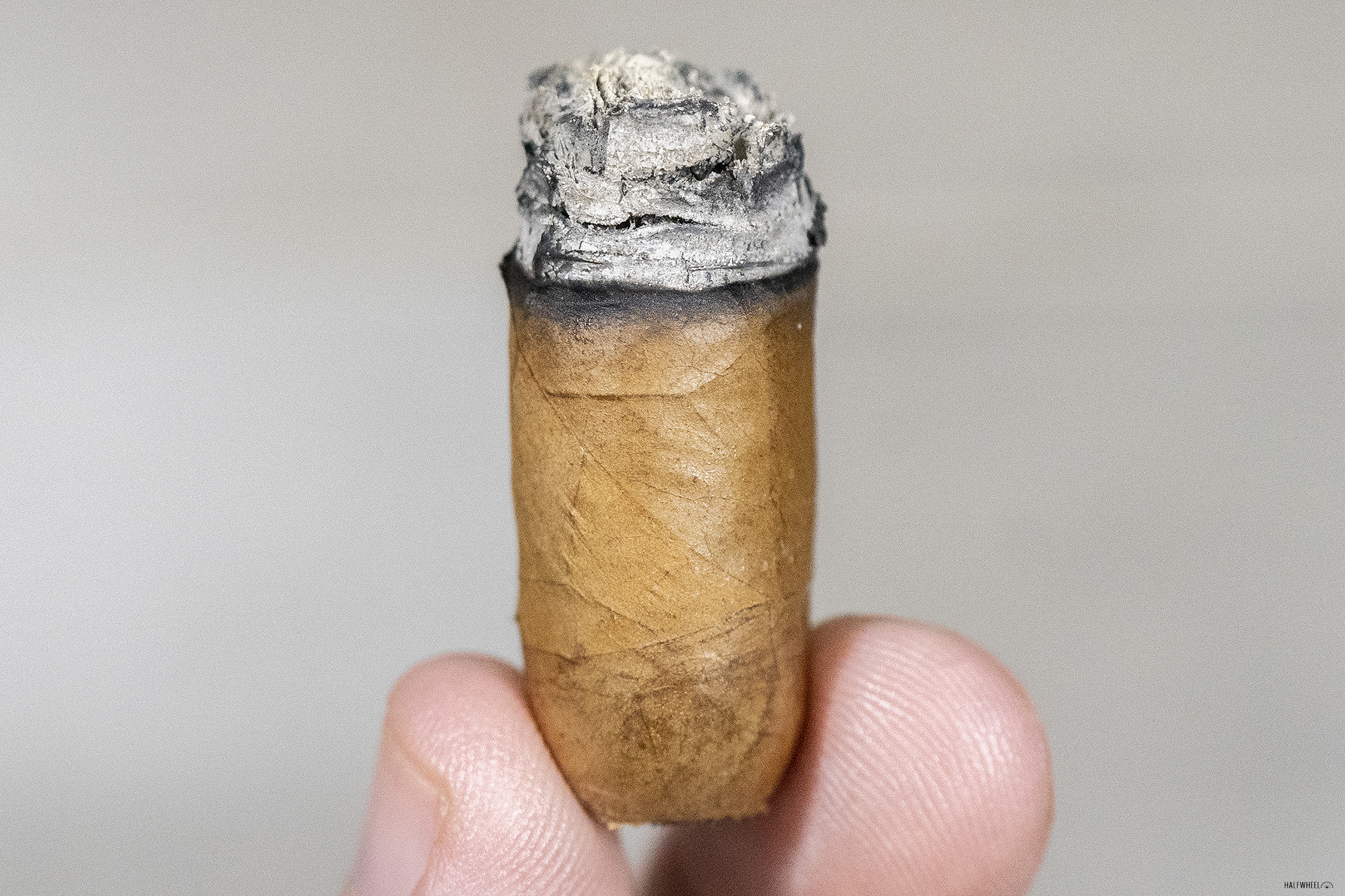 I must first begin by giving the Patoro Terre Blanche Lancero a tremendous amount of credit for: its construction, combustion and the progression of the flavors. While the first two are pretty indisputable, the final one is only part of the equation, as the progression is one part of the equation, while the flavors are the other part. Each of the three cigars I smoked for this review hit points where I would easily buy more of if that was what the cigar offered from start to finish, but while the journey was great, the stops along the way were not always ones I wanted to make. If I could cut up the three cigars and stitch together one third from each, I could probably make a cigar that would place decently well on our Top 25. Yet no one single cigar was able to achieve that. I would gladly light up another one of these both to celebrate Patoro's 20th anniversary and simply to enjoy on its own, but this is one cigar where I wish the sum of the parts could come together in a way to present a truly great and whole cigar.