When Patrick Lagreid reviewed the Patina Maduro Rustic in May 2020, he wrote:

(Mo) Maali said more vitolas are in the works for a future release, though with factory closures and other disruptions to the cigar-making process, he wasn’t able to specify when those other sizes will be released. He also didn’t disclose what the other sizes will be, though his other lines offer a 6 x 52 toro, a 6 x 46 corona and a 7 x 49 Churchill, so those might be good starting points for guesses.

While Patrick only went one for three on his “starting points for guesses,” there were in fact three new sizes and he correctly predicted—or acknowledged—the one I’m reviewing today.

The Patina Maduro line was launched in 2020, the third blend in the company’s portfolio following the debut Connecticut and Habano versions. While the company has still not disclosed the tobaccos used, the line is produced at Nicaragua American Cigars S.A., a factory closely associated with the Oliva Tobacco Co.

There were two sizes available upon debut in 2020, but as Patrick noted, more were in the works. In the end, the company added a short robusto, a corona gorda and the 6 x 52 toro size. That brings the line to five vitolas: While there’s nothing particularly special going on from a visual standpoint, I’m appreciative of the clean-looking appearance. The cigars appear well rolled with no overt flaws. This is a decently dark wrapper with quite a bit of red hues helping to accentuate the oiliness of the wrapper. Aroma-wise, the wrapper has a pronounced barnyard scent with some acidity and a specific smell that reminds me of Neosporin, though I’m not sure what that specific sensation is. To be clear, it’s not that the wrapper smells like Neosporin, rather, it has one aroma that is something I recall smelling in Neosporin. The foot smells like a Nicaraguan cigar: semi-sweet chocolate paired with some spicy red pepper, dark earthiness and some gumball-like sweetness; it’s also pretty full compared to the medium-plus aroma from the wrapper. Cold draws continue the “I think this cigar probably has Nicaraguan tobacco in it” line of thinking. There’s some more of that chocolate and red pepper combination—this time the chocolate a bit sweeter and the pepper a bit more muted—along with earthiness and some oranges. It’s medium-full and also sharp, but muted. The flavors are super aggressive but it seems like they don’t hit the crescendo that I’d expect given the first moments I taste them.

The Patina Maduro Bronze starts with even levels of earthiness, toastiness and nuttiness before the finish kicks in with pine nuts, black pepper and burnt coffee. Similar to the cold draw, a lot of puffs are quite sharp, but they lack the full sensation I’d expect, leading me to classify them as muted. Earthiness, maple and a flavor that reminds me of the smell of a pile of fall leaves are the leading flavors, though there’s also some meatiness and dark chocolate. After the first inch or so, the profile gets increasingly drier thanks to an uptick in straw and grain flavors. The finish has more of the pile of leaves flavor joined by coffee, mineral flavors, butter, hay and oranges. Retrohales taste like peanuts—more the drier peanut shell variety—along with orange peel and some sunflower seeds. Once the smoke leaves my nose, there’s a lot of mineral flavor and hay. What’s odd is that the finish, in particular, hits my palate almost like flavors would when my nose is a bit stuffy—everything is a bit muted and there are times in which I can’t taste the full flavor progression happening in an orderly manner. Flavor is medium-full, body is medium-plus and strength is medium-full. Construction is excellent. 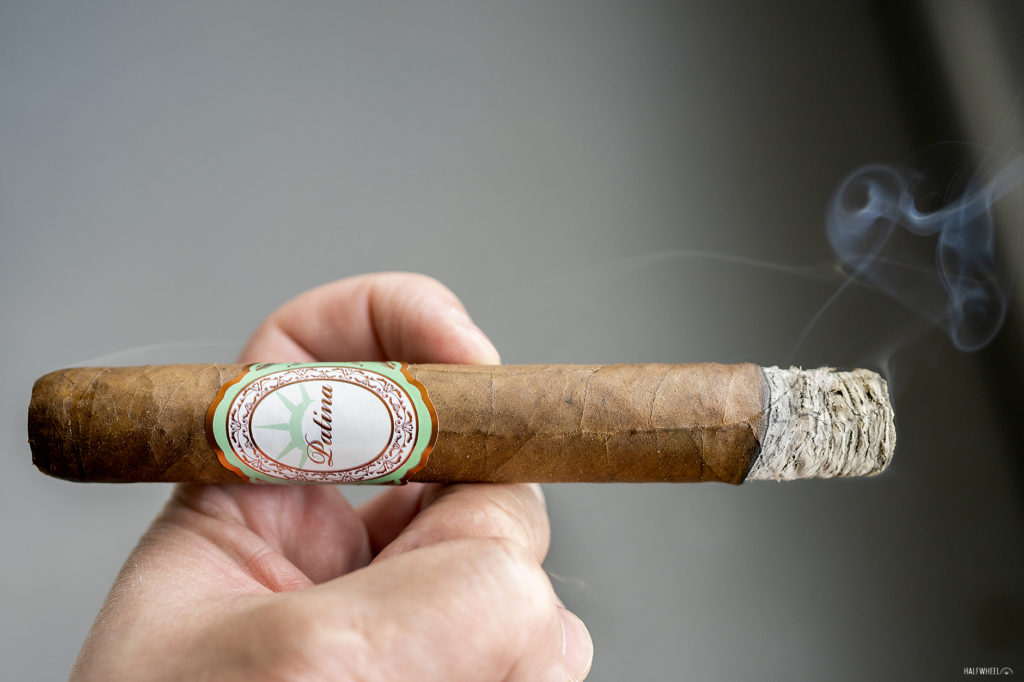 While earthiness is probably the strongest flavor—slightly beating out whatever would be second—there are a number of grainy sensations that make it difficult to conclude that earthiness is the leading flavor during the second third. Sometimes it’s sweeter like a Cap’n Crunch cereal, other times it’s more like multigrain bread, sometimes it’s dry and more reminiscent of dry grains. The problem is no matter which version it is, it dries my mouth out a lot. It’s not that it irritates my throat, but every puff is in the “dry” category and at this point, I want pretty much anything other than a dry flavor. The finish has burnt espresso, leather, hay and some peanut shells. Eventually, my mouth is just some sort of combination of dry grain and toasty flavors. Retrohales are toastier versions of the main flavor, peanut shells remain a big part and there’s some yellow mustard that serves as a brief respite in the form of contrast. The impact of the mustard is short-lived and pretty quickly the finish kicks in with herbs, sawdust, a pita-bread flavor and a mild amount of pepper. The stuffy-like characteristics of the second third are gone, which is a welcome change. Flavor is medium-full, body is medium-full and strength is medium-plus. Construction remains excellent across the board, the only thing that seems a bit off is how quickly the cigar is burning, but that’s more of a difference than a criticism. Things keep getting drier in my mouth during the final third of the Patina Maduro Bronze Toro. I’m not sure if the cigar is producing flavors that are drier or rather that my palate is just continuing to head in that direction, but it’s very dry. The grain flavors are a bit more vibrant than before and given how the cigar is tasting, I spend time trying to find some differences. At times there’s almost a tofu-like flavor. It presents itself very differently than tofu—particularly because of tofu’s unique texture—but purely flavor-wise, this tastes like how I imagine tofu in dry, powdered form would taste. Beyond that, the profile is a bit saltier and there’s some sweetness at times, a faint blueberry muffin-like flavor; but even that has more of the dry grains, which just make things worse. The finish sees saltiness and toastiness added, which contrast the grains, though there’s also some mild harshness. Retrohales continue to be led by peanuts—now a bit more peanut than peanut shell—and a touch of meatiness. The finish has some weird herbal flavors along with a mild pineapple sensation, and—of course—lots of dry grains. Eventually, black pepper begins building on my tongue during the retrohale’s finish, the only time and place during the final third where I find any pepper. Like before, I’d peg the flavor at medium-full, body at medium-full and strength at medium-plus. Also like before, construction remains excellent. There’s a lot to like about the Patina Maduro Bronze, but balance is not one of them. Unfortunately, this cigar has not only a rather homogenous profile but also one that isn’t the easiest to enjoy without some contrast. The overly dry and grain-dominated profile that exists from the first inch to finish is tough to enjoy after 15 minutes, let alone an hour. At times, that flavor is better than others but the real issue isn’t necessarily with the dryness or the grains, it’s that there just isn’t anything that makes a noticeable attempt at providing some flavor diversity. While at times there are hints of some differing sensations—I was able to pick up different types of fruits and even something that reminded me of yellow mustard—they are overwhelmed by the dry grain flavors during nearly every puff. The good news is this is something that could change over time. I’m not sure how long it’s going to take, but this seems like a cigar to put in the humidor for a few years and see what happens.