Earlier this year, General Cigar Co. showed off a new Partagas, albeit, one that looked rather familiar.

It’s called Partagas Heritage and if it reminds you of the iconic Partagás Serie D No.4, it’s not challenging to see why. The gold-on-red band has long been used on one of Cuba’s most popular cigars.

“We set out to create a retrospective blend that celebrated the very best of Partagas to date, and took great pride in putting together the ingredients, just like coming up with a very special recipe,” said Jhonys Diaz, vp of operations for General Cigar Co. “This was a group effort, with our blenders in the Dominican Republic and Central America working with the marketing team to achieve the final taste.” 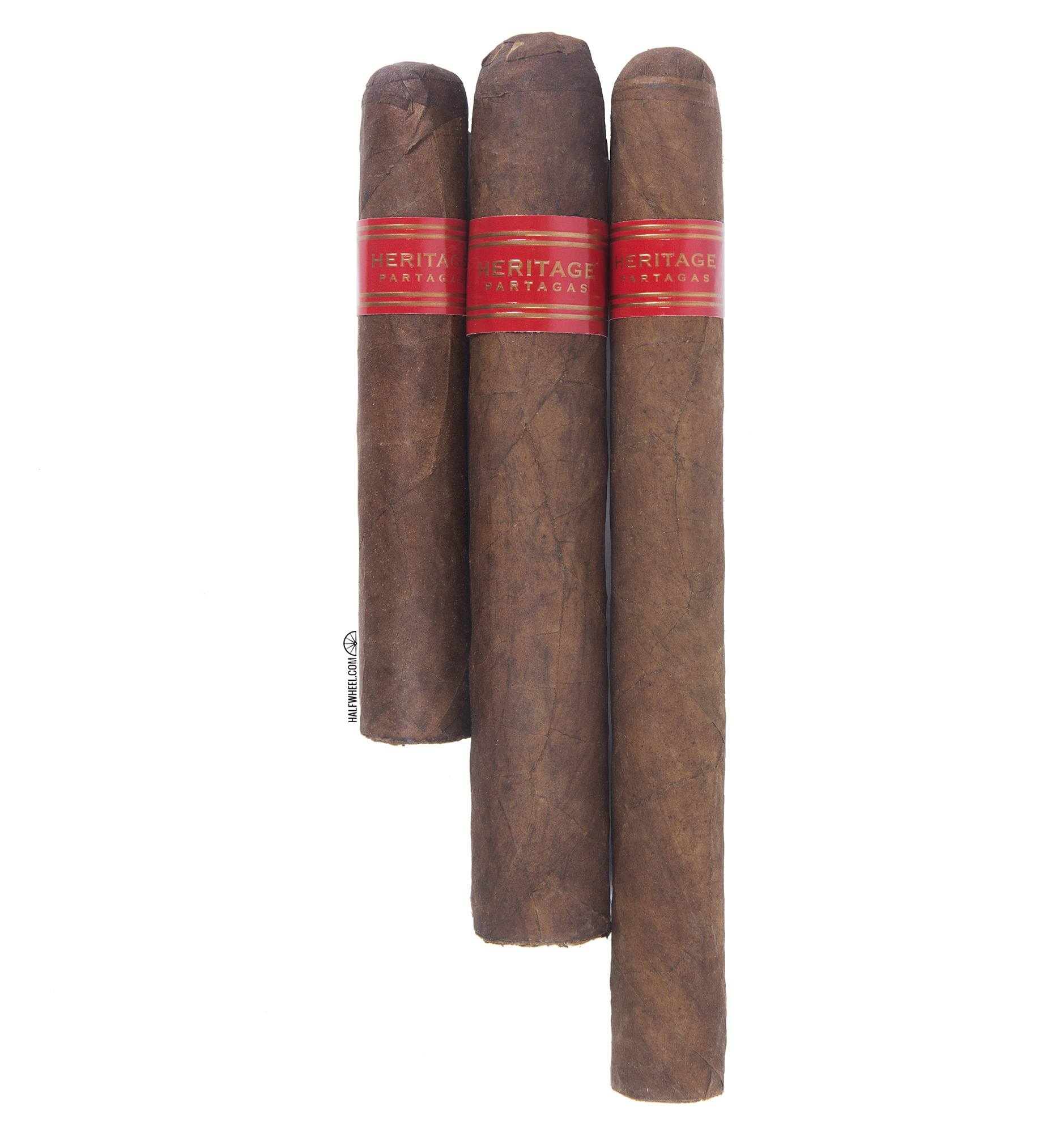 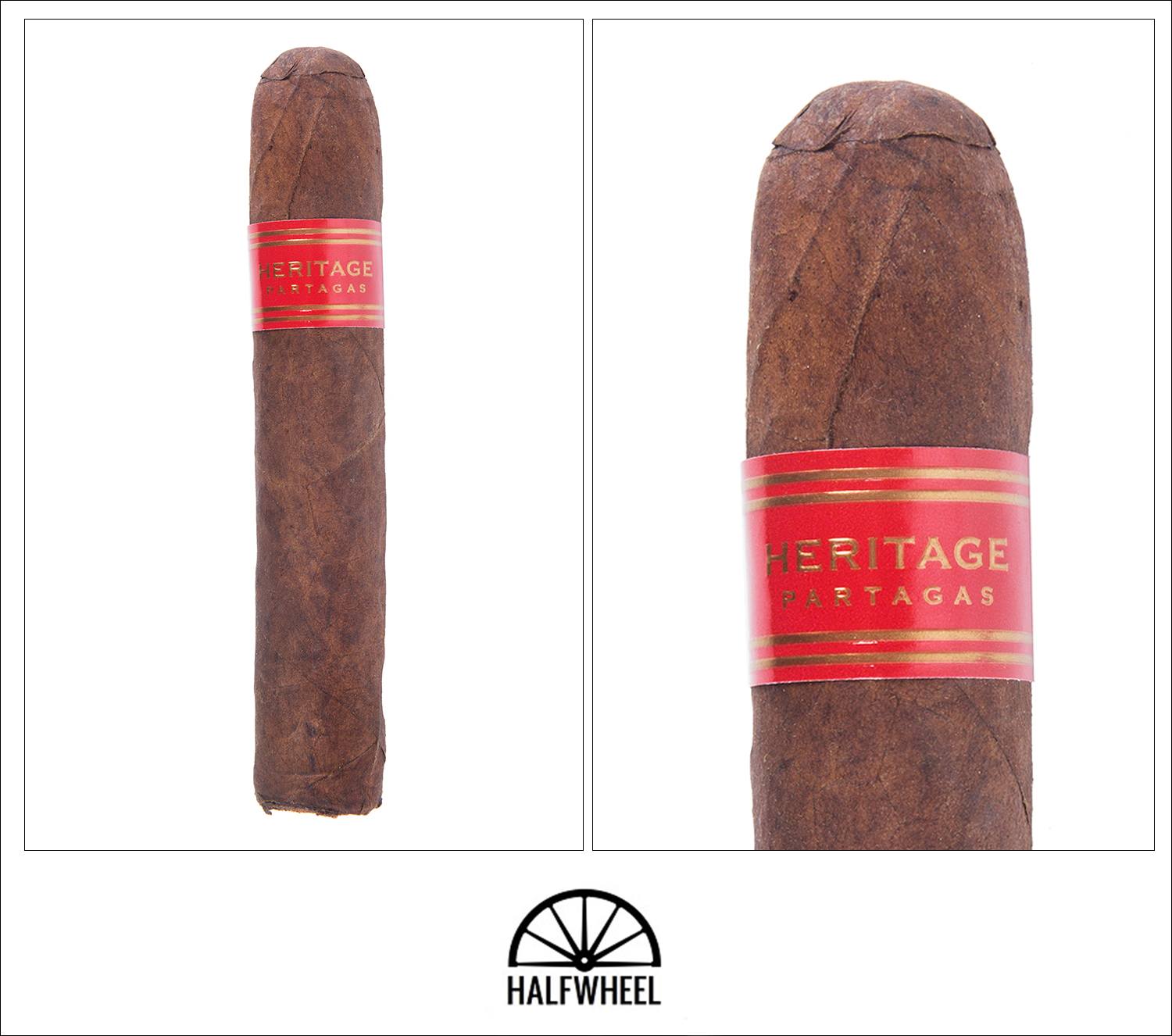 The cigars aren’t rock hard, but the inner 80 percent of each feels like it doesn’t have any give. Aroma from the wrapper has leather, raisins, some chocolate, acidity and saw dust. The foot has a big powdered hot chocolate note, some leather, oatmeal and dried fruits. As for the cold draw, it has chocolate ice cream, some additional creaminess, pistachio and some bitter coffee.

It begins floral with woodiness, some chalkiness, lots of bark—which reminds me of beef rib—and a touch of harshness which leads me to proceed with caution. Fortunately, that harshness stays rather restrained for the first inch. Instead, the Partagas Heritage is dominated by buttered bread followed by bittersweet cocoa, some crackers, a bit of allspice and white pepper. It’s extremely smooth and rather detailed, medium-full in intensity, though building. While a touch-up is not required on all three cigars in the first third, the burn is a bit out of hand by the end of the first third. 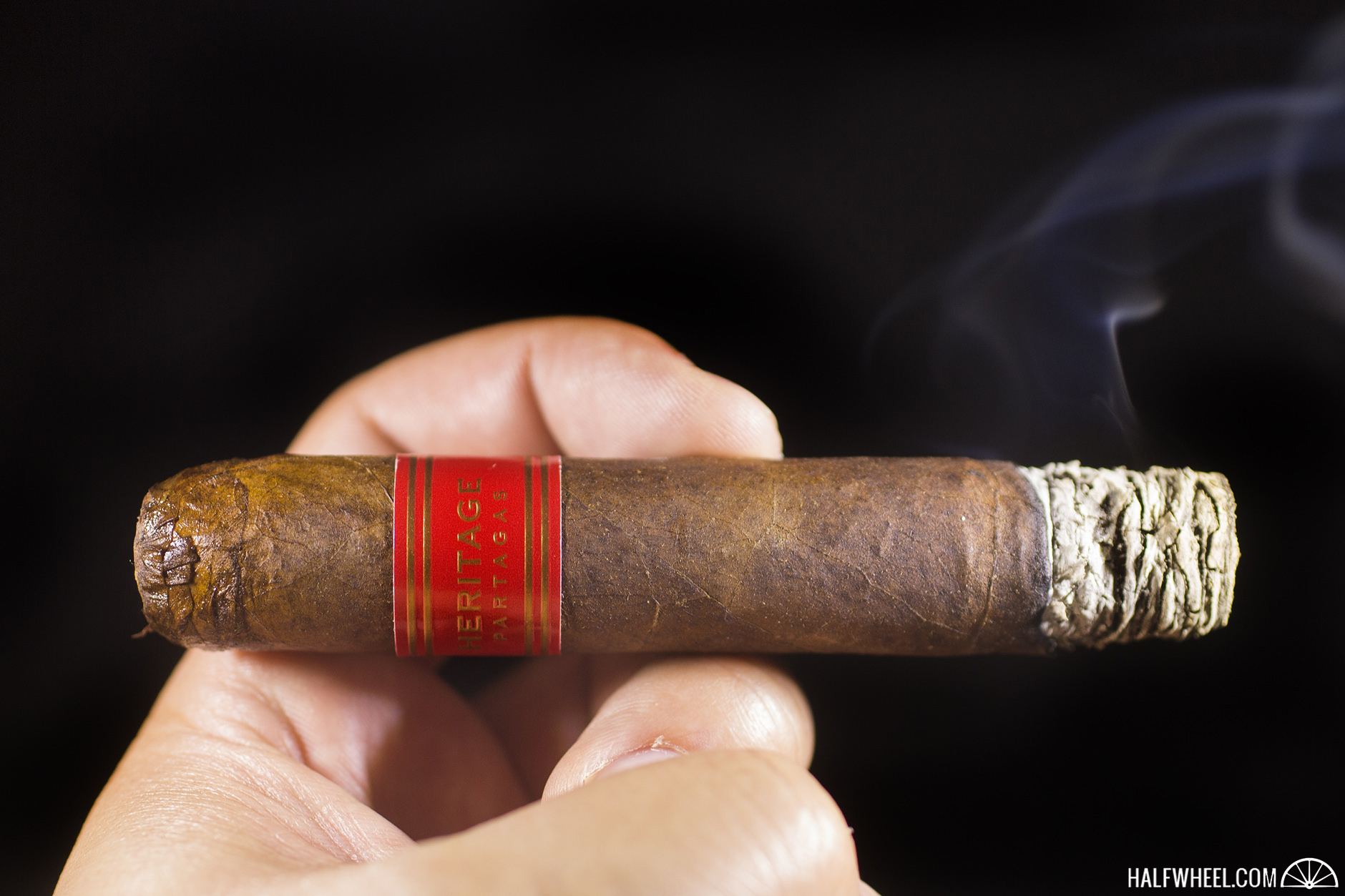 There’s a unique caramel flavor that takes over the middle portion. It’s a bit watered down, more like spun sugar than a caramel candy, and it rests on top of some nuttiness, toasty flavors and some watered down bourbon. The spice picks up to a much stronger secondary candidate and the overall flavor intensity of the Partagas Heritage has picked up quite a bit, well into the full category. Strength is medium and body is full. 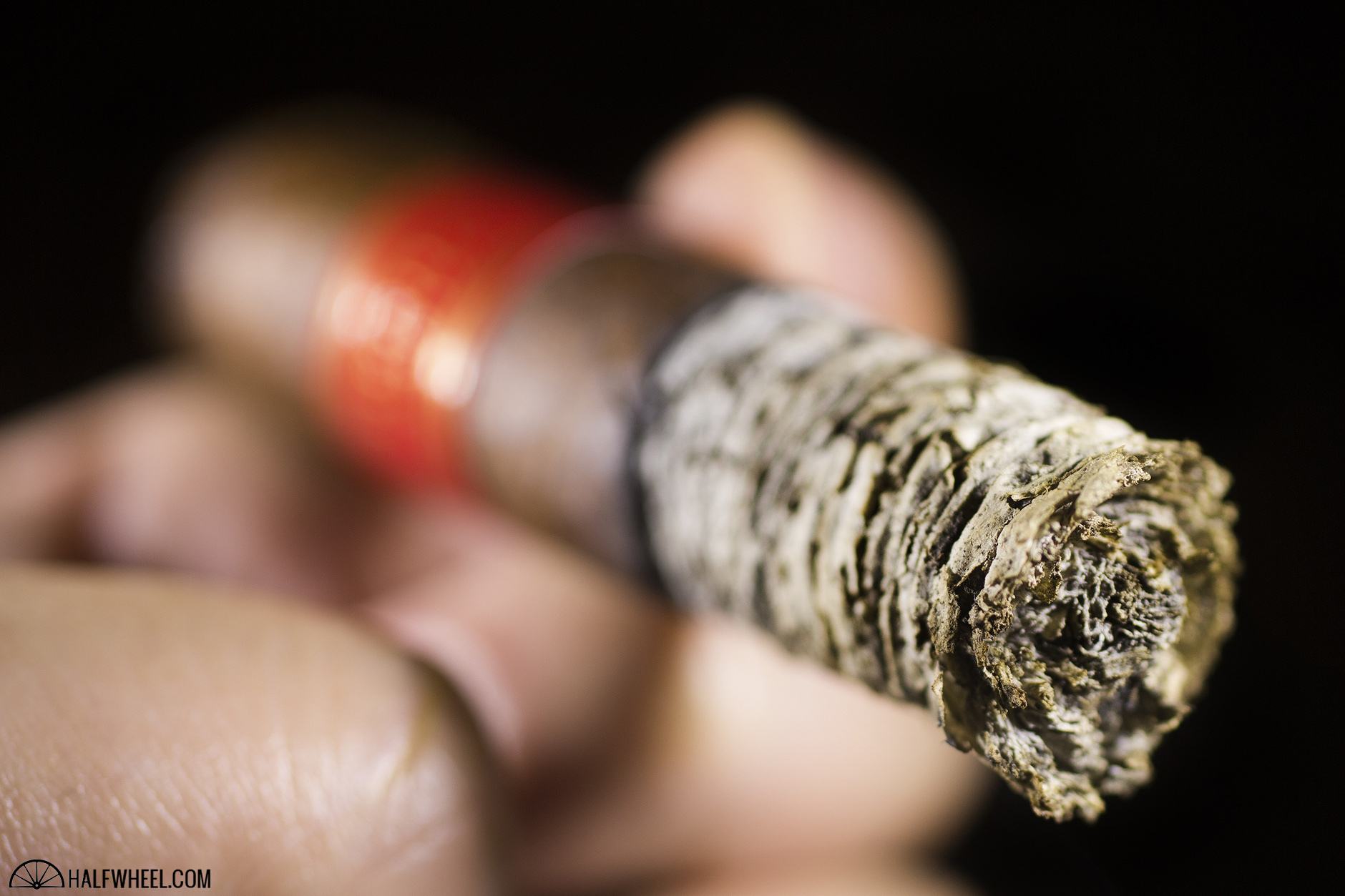 While the first few minutes of the final third remain fine, with an inch or so remaining, the burn is struggling and the flavor has turned quite harsh. I opt for a full touch-up around the ring of the cigar, even though none of the three cigars ever fully go out, and that helps. Through the harshness are some more generic flavors of woodiness, some creaminess along with a familiar toastiness. 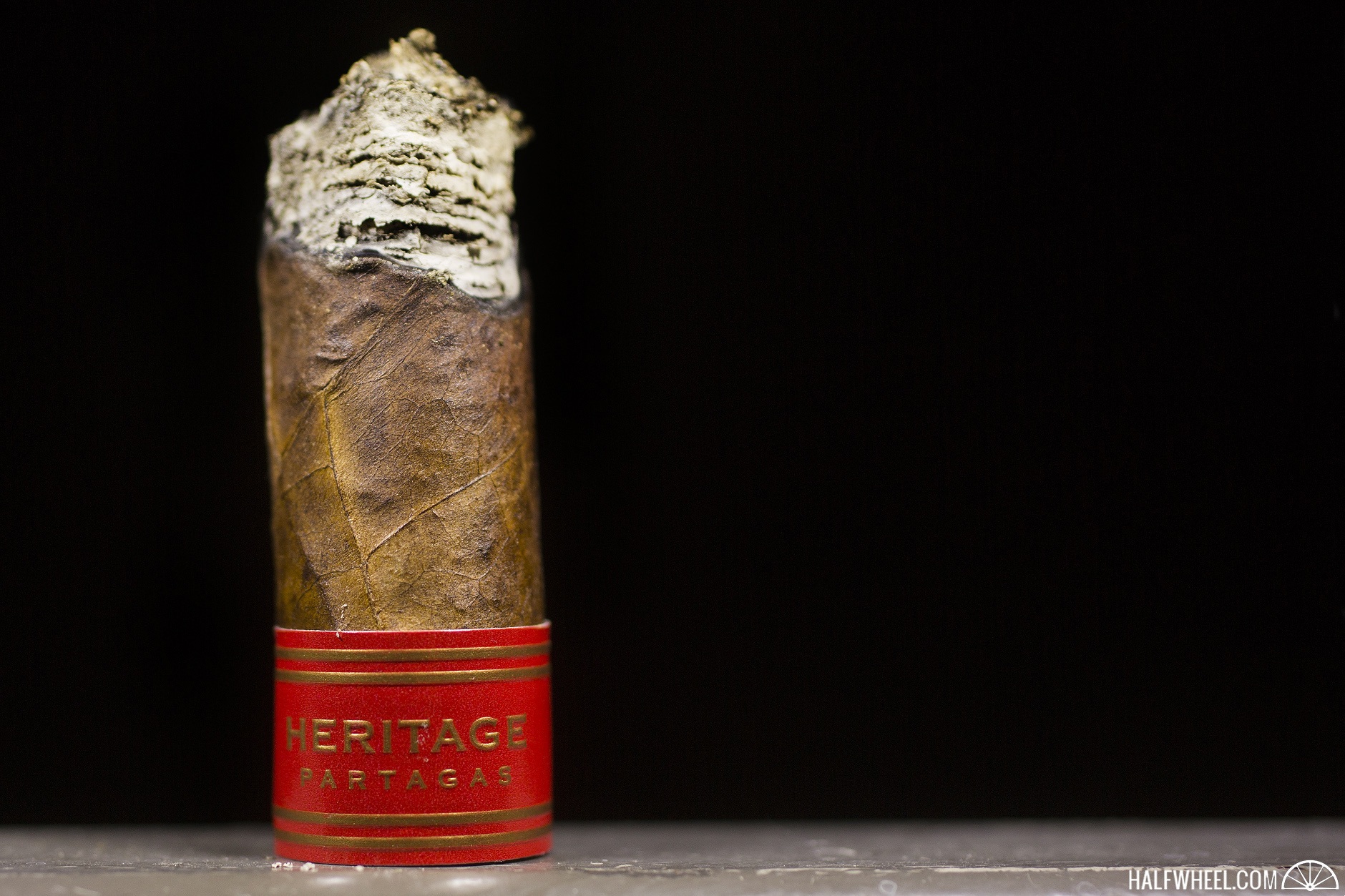 For the better part of four inches, the Partagas Heritage was a very good cigar. Sadly, the final third didn’t match the performance of the first two, though with the help of a lighter I was at least able to smoke it down a bit further. This reminded me a lot of the Dunhill Signed Range Selección Suprema, a cigar I thoroughly enjoyed thanks to its complexities. General has shown some signs of late that its blending is improving and this is further evidence to the cause, even if it’s not a complete home run.