In the annals of cigar history, Dunhill is considered to have produced some of the best sticks of all time.

The cigars were so legendary, it has been theorized that the reason the cigars were so good was that Dunhill was using superior tobacco in their blends. What some people may not be aware of is that for a time, Dunhill blended its tobacco with other cigar manufacturers in Cuba and released these creations in joint ventures called Selección Suprema, most notably El Rey del Mundo, H. Upmann, Hoyo de Monterrey, Montecristo, Partagás, Por Larrañaga, Ramón Allones and Romeo y Julieta.

In 1907, Alfred Dunhill opened his first tobacco shop on Duke Street, London. Before the Cuban Revolution, Dunhill had numerous distribution and marketing agreements with several Cuban cigar manufacturer, selling exclusive and hard to find brands such as Don Cándido and Dunhill’s own Selección Suprema line, with various sizes from many famous cigar makers such as Montecristo and Romeo y Julieta. After the Revolution, Dunhill’s unique relationship with Cuban cigars would continue with the communist government’s tobacco monopoly, Cubatabaco. Dunhill was given the exclusive rights to three different brands: Don Cándido, its own Don Alfredo, and La Flor del Punto, plus the numerous Selección Suprema sizes produced by the marques that had survived nationalization. In 1967 the tobacco branch of Alfred Dunhill Ltd was sold off and became its own separate entity. In 1981 tobacco blending (of the Dunhill pipe tobaccos, at least) was transferred to Murrays, of Belfast. In 2005 it was transferred to Orlik of Denmark, renewing debate about blending/flavor changes in Dunhill’s pipe tobaccos.

According to Cubatabaco records, all Dunhill Selección Suprema cigars of various brands and the three Dunhill Exclusive brands (Don Cándido, Don Alfredo, Flor del Punto) were discontinued in the year 1982. In fact, here is a page from a 1959-60 Dunhill Catalogue that details the portfolio.

In 1984, the new Dunhill cigars became available, marking the end of an era. The Partagás Dunhill Selección Suprema No.150 is one of these vitolas. From the information I was able to gather, only a few cabinets have been found, but they were found intact and in perfect condition from family lockers at the Dunhill store. I was able to purchase a few of these and waited until my birthday to smoke one for a review.

As I said, the cigars that were found in this vitola were in cabinets of 50, and below are photographs.

Enough of that, let’s get down to business, shall we?

The cigar itself has a fairly light brown wrapper, fairly dry to the touch, and nicely firm when squeezed. It is obviously well-constructed, but it does feel just a bit light heft wise. The wrapper has a bit of a floral scent to it with some spicy undertones, almost tea-like. It punches very easily and provides a very nice amount of spice right off the bat—but no pepper—with a dominant flavor of cedar and just a hint of espresso. A very nice beginning. The second third started out the same, but then took a major turn. I have often heard reviewers mention jalapeño peppers when talking about the strength of a cigar and always hoped I would someday taste it in a smoke. Well, this cigar had a strong note of jalapeño pepper for quite a bit of the second third. Again, more of a description of the strength or heat, as opposed to the actual flavor, if that makes sense. It hits the back of my throat like a bomb and while it is strong, it is not overwhelming. I could still taste the woody note from earlier and even pick up a new flavor of leather. 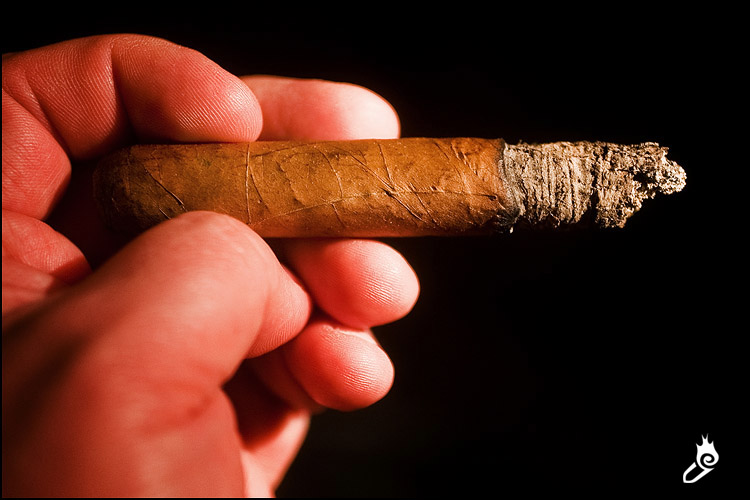 The final third calmed down quite a bit. The Jalapeno pepper dissipated into a nice background note and I was left with the leather and cedar flavors. There also seems to be more of a creamy, chocolate, sweet undertone to the Dunhill contrasting with the other flavors very nicely. A great end to the cigar.

Before I first smoked the cigars for this review, I really had no idea what to expect. Would there be a more sweet overtone, which is a Dunhill signature, that would overpower whatever other flavors were present? Well, I am happy to report that this cigar took the best that Partagás had to offer, and made it a much more balanced and therefore infinitely more enjoyable cigar. It looked, tasted and smelled like a Partagás, but this cigar succeeded in combining the best of both worlds: the in your face spiciness and flavor with the balance of the Dunhill. Unfortunately, 99.9 percent of cigar lovers will never smoke one.