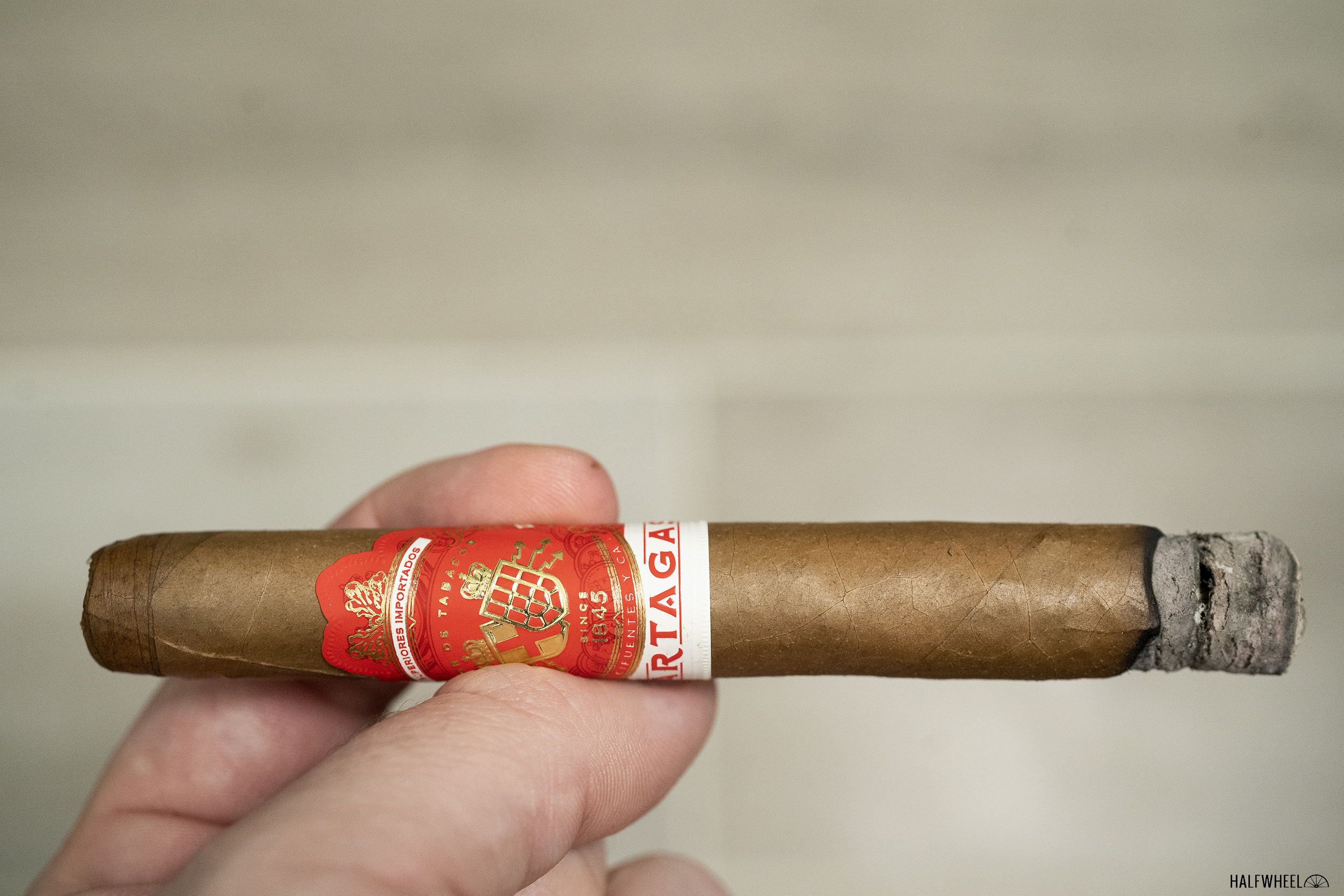 When I think of the cigar industry’s biggest and most heritage-laden brands, I often assume that at some point in its history of one of those brands, it had a cigar made that uses one of what I’d call the fairly common types of wrapper leaves. But such was not the case with the non-Cuban Partagas brand and a Connecticut seed wrapper, at least not until the summer of 2021.

The Partagas brand—which is owned by Scandinavian Tobacco Group (STG) and had long been part of the company’s General Cigar Co. portfolio before being transferred to Forged Cigar Co. in January 2021—uses a variety of wrappers in its extensive lineup of cigars, but I often think of darker, almost finger-staining wrapper leaves when thinking of the brand. But now there is a Connecticut-seed wrapper option to consider, and it comes by way of the Partagas Cortado.

The blend uses an Ecuadorian Connecticut wrapper, an Indonesian binder and a quartet of filler tobaccos: Honduran tobacco from the Jamastran Valley, Mexican tobacco from the San Andrés Valley, and Nicaraguan tobaccos from Condega and Jalapa. The line is produced at the STG Estelí factory in Nicaragua, which is likely best known for producing CAO. It also marks the first Partagas line to be produced in Nicaragua.

“With interest in the Partagas brand continuing to grow, we felt it was the right time to expand the brand portfolio with a mellow-to-medium-bodied blend,” said Matt Wilson, senior brand manager for Partagas, in a press release. “The team and I are especially proud of Partagas Cortado’s incredible versatility when it comes to pairing. The blend is creamy and complex, and its taste notes can push forward or bow to other flavors, depending on the pairing. We feel our Nicaraguan artisans did a wonderful job with the blend and look forward to sharing it with Partagas fans, old and new.”

It is offered in four sizes, including the rather unique 8 x 54 Presidente size: 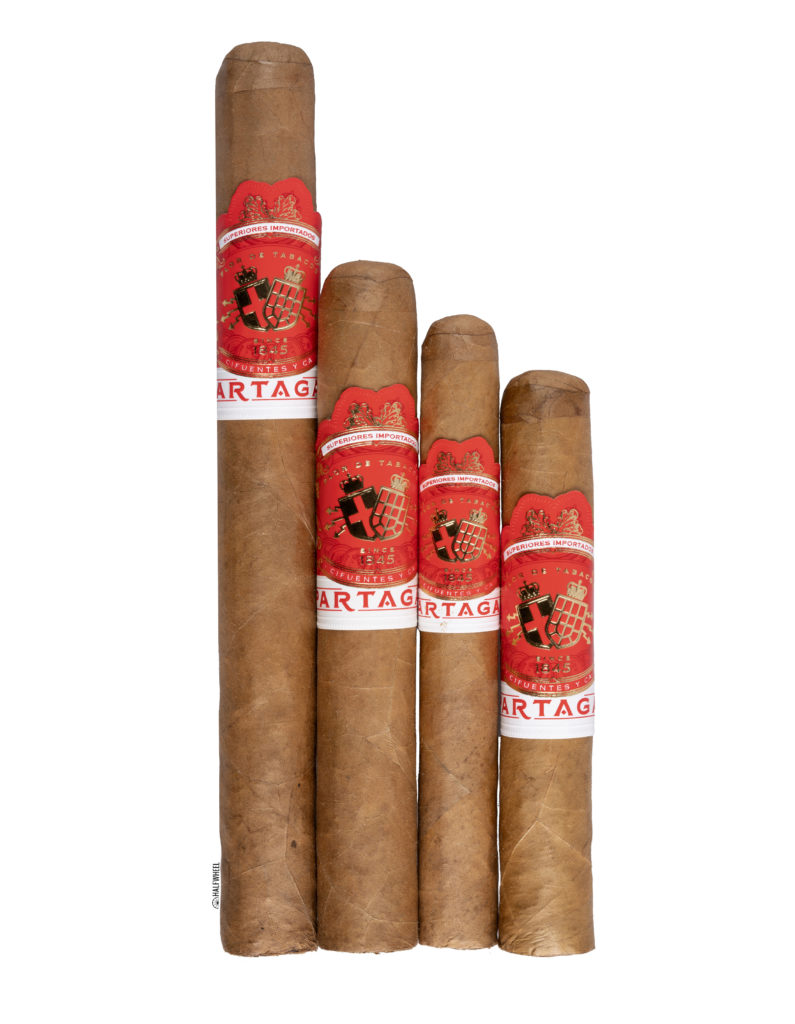 The line shipped to stores at the end of August 2021, packed in bright red boxes that are a nod to a color that has long been associated with the Partagas brand. 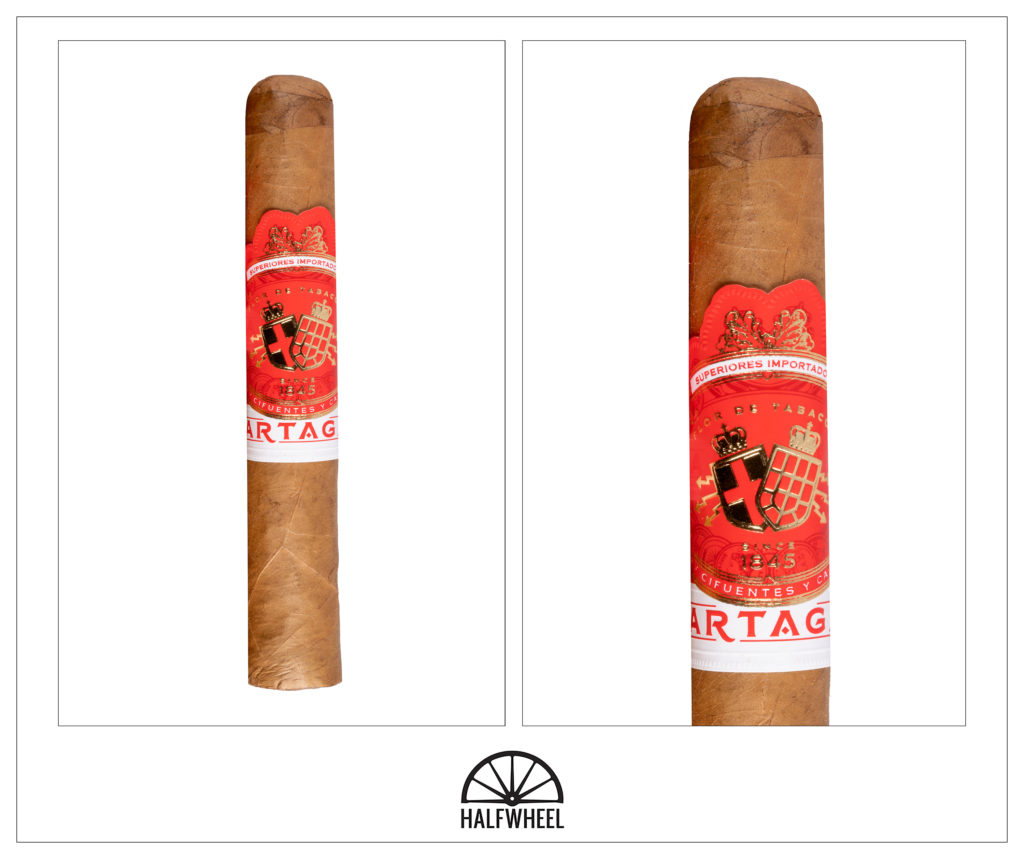 There are times when I’ll look at a cigar and struggle to figure out what is the first thing to catch my eye, something I experience with the Partagas Cortado Corona. The size is a rarity recently, both in what I’ve been smoking recently and seemingly in the marketplace, so there’s that, and then there is the band, a big, bright red and white creation that is not only new and eye-catching on this heritage brand but also takes up a good bit of this smaller vitola. Then I realize that this is a Connecticut-seed wrapper, something I might not have guessed right away given its well-tanned, nutty shade of brown. The leaf has some average vein structure, visible but flat seams and a well-constructed head. The first sample is easily the softest cigar I have felt in a while, having so much give it leads me to think it is underfilled. If that’s not the case, then this is the spongiest filler tobacco I have come across in a while. The second and third cigars aren’t quite as soft—or at least don’t surprise me like the first one did—but both are soft enough to be noticeable. The foot of the cigar has a very light and soft aroma of a freshly opened box of what I’d call the “healthier” cereals as opposed to something on the sweeter end of the spectrum. As I was concerned about, air moves easily on the cold draw of the first cigar, though the flavor is a bit more vibrant than the aroma. There’s more of the cereal flavor, now somewhere between wheat flakes and unsweetened corn flakes, with just a bit of light pepper on the finish. Subsequent puffs reveal a bit of light, dry woods and peanut shells. The cold draws are more dialed in on the other samples.

Much like the band and size of the cigar did, the first puffs of the Partagas Cortado Corona catch my attention for a few reasons: it’s a dry yet somehow still creamy profile, with the smoke soft on the tongue but packing a tingle by way of dry woods and a middle-of-the-road pepper. While the name is Cortado, it has me thinking of a cappuccino out of the gate, though I certainly wouldn’t be opposed to pairing it with seemingly any hot, creamy and unflavored coffee drink. Once the first clump of ash falls off, the profile picks up a lot more of what I would call traditional flavors of a Connecticut-wrapped cigar: a bit of general sourness that turns into sourdough bread, which as I have mentioned in other reviews is a flavor that I’m generally fond of but not the craziest about when it appears in a cigar. It’s an interesting transition more than an interesting set of flavors, sort of like when the shuffle function on your music player delivers two songs out of different genres. The Connecticut-dominant profile hands around for a bit, before fading back and making way for more of the dry woods, some light nuttiness and a bit of white pepper, a familiar combination that is lacking the creaminess from just a few minutes ago. From a technical aspect, it is readily apparent that the ash is quite delicate, particularly on the first cigar, building decently but quick to fall off with movement. The burn line, smoke production and general combustion are all very good. Flavor is a vibrant medium, body is medium as well, and strength is mild thus far. While I wanted the creaminess to come back in the first third, my wish is granted at the start of the second third. It’s an addition that fills out the body of the cigar quite well, and while creaminess can sometimes quiet down the other flavors, I don’t find that happening here. This is particularly true with retrohales, which are bright with white pepper but still impressively smooth. There’s more nuttiness in the profile, now touches of wheat toast and continued sprinklings of white pepper and the occasional bit of black pepper that hits the front third of the tongue. At the midpoint, I take a moment to appreciate the complexity and balance of the cigar, both of which have been very good thus far. It seems that the wrapper’s flavor rejoins the mix at the midpoint, something that comes along with an increase in white pepper on retrohales, giving the nostrils a much brighter sensation than earlier. In fact, everything seems to intensify in the final puffs of this section, as the dry wood and pepper are both more intense, particularly towards the back of my palate. It also has a more noticeable drying effect on my mouth than earlier. The second third closes out with a building pepper through the nose, and it’s one that doesn’t require a retrohale to experience though doing so provides a more direct and intense experience. The technical performance continues to be very good, though it seems like each cigar has its own specific required puffing rate in order to stay burning. Smoke production is quite impressive from this fairly slender cigar. Flavor has moved from medium to medium-full, body is medium-plus and strength has just started to approach the medium mark. The final third of the Partagas Cortado Corona starts off about as complex as it has been at any point, blending creaminess, pepper and a bit of light nuttiness and woods. Of those, the creaminess seems is close to if not at its high point as well, fairly lush and coating on the palate yet not blanketing the other flavors. It also has more appreciable sweetness than earlier, by no means is it a sweet cigar now but it definitely has a dairy sweetness to it. The complexity continues as the toasted bread flavor from earlier loses the toasted aspect, and there is not just the slightest bit of earthiness, and if I had to pick what’s driving the flavor it seems to be the Honduran binder. Not long after that change, the final inch of the Partagas Cortado Corona picks up a bit of red chili pepper flake heat, as well as actual heat from the approaching core of the cigar. Given this development, it means this might well be a cigar you need to put down a bit early so as to avoid the heat messing with the flavor. Flavor is a very enjoyable, complex and balanced medium-plus, the body is medium-plus and strength is right around medium, its strongest point yet. The Partagas Cortado Corona is a very impressive cigar, a near perfect morning cigar to pair with your favorite coffee drink, or an anytime cigar when you're looking for something that isn't dominated by strength but offers balance and complexity instead. Other than the very delicate ash and the sudden introduction of heat at its conclusion, there is little to fault the cigar for, but plenty for which to praise it. The flavors all work well with each other, there is a near constant evolution of them by way of generally subtle handoffs, and the technical performance makes it easy to enjoy without issues. While I have yet to smoke the other sizes in the line, the Corona vitola is a definite winner and one that is definitely worth a try.