The term icon is one that at times gets used a bit too liberally in certain fields, often applied for current stars with hit products as opposed to those who have accumulated a sizable body of work that when coupled with their longevity puts them at a level above and beyond their peers.

One such person in the cigar industry who deserves the term icon is Benjamin “Benji” Menendez, who has been a part of the business for well over six decades, beginning his career alongside his father in Cuba and recently concluding, at least formally, with the announcement of his retirement from General Cigar Company.

News of Menendez’ retirement came in early December 2013, with A Cigar Smoker’s Journal being the first one to report the story.

Menendez’s father was the managing partner of Menendez, Garcia y Cia. in Cuba, the owners of the H. Upmann factory and the makers of Montecristo. He left the island in 1960 after the revolution and began a journey through the cigar industry that would take him to Altadis USA, Phillip Morris and General Cigar Co. In 2009, the latter of those three companies produced what may be his most recognizable work in humidors today, the Partagas Benji Menendez Master Series, a 6 x 46 cigar that gained critical acclaim and returned to retail with another release in the spring of 2013. That reprise included the original size as well as a new 7 5/8 x 49 vitola dubbed the Prominentes.

In November 2012, the line added a 6 x 54 toro called the LX that was limited to just 5,000 boxes of 18 cigars. The name signified Menendez’s 60 years in the cigar industry, as LX is 60 expressed in Roman numerals. Menendez, 77, has also had a hand in countless other cigars including Macanudo and the non-Cuban Partagas, and has mentored two of General’s more visible figures, Michael Giannini of La Gloria Cubana and Foundry, and Rick Rodriguez of CAO.

While there had been some chatter about the release of a cigar to commemorate Menendez’s retirement, the official word came out just before the end of 2013, as General Cigar Co. announced the Partagas Benji Homage 62. The release would come in two sizes, a 6 1/2 x 54 toro and 5 1/2 x 54 robusto gordo, each limited to 15,000 cigars and with prices of $9.50 and $9.00 per cigar respectively, before taxes. 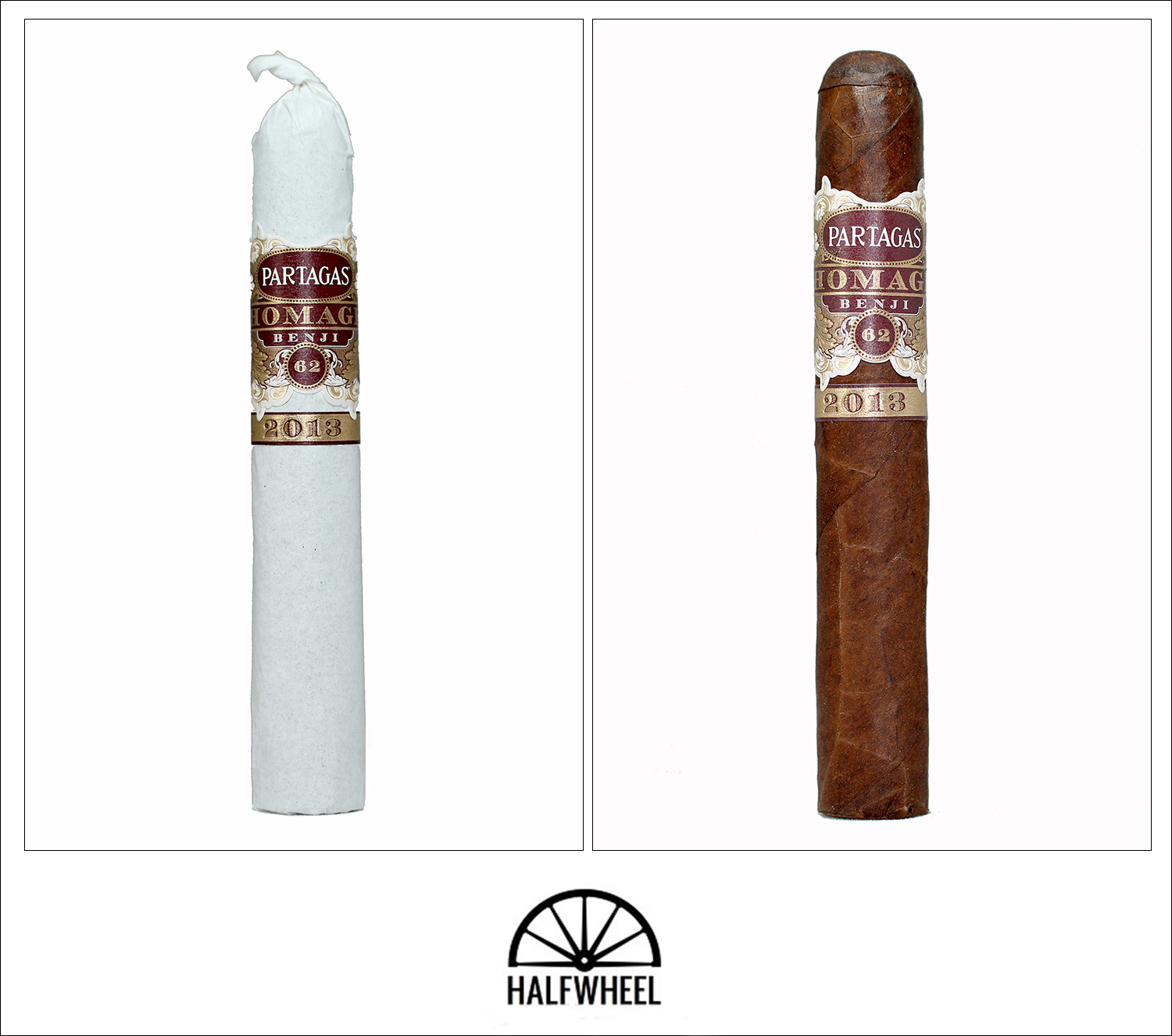 The Partagas Benji Homage 62 Robusto Gordo is covered in a piece of white tissue paper that is held together by a pair of bands as well as twists at each end. Removing the paper reveals that the cigar itself also has both bands, meaning you get two sets of bands with each cigar; a bit much maybe, but an interesting approach. The wrapper leaf is a bold shade of brown, similar to fresh made beef jerky, with a good bit of oily sheen and some mottling, as well as surprisingly pronounced veins at certain points. The cap on the first cigar smoked shows a noticeable ridge, which when combined with where the veins happened to fall draws my eye right to the head of the cigar. Closer inspection of the rest of the stick reveals a pronounced bump near the midpoint and the rest of the roll isn’t as smooth or perfect as one would expect. There is a touch of give in the cigar, with the second sample showing a bit of underfilling towards the foot. The pre-light aroma has a cool, thick syrupy sweetness to it with notes of tree sap and thick teriyaki or katsu sauce serving as reference points. The cold draw is easy and largely unrestrained, showing notes of tree bark and a touch of soil with no pepper component.

The cigar offers an impressive amount of tangy bite as soon as it is lit, with the syrupy note coming alive and delivering a surprising amount of red pepper that wasn’t noticed in the cold draw or pre-light aroma. In the nose, it quickly becomes all about a complex sweetness—at least on the intake—as smoke pours off the cigar in heaping quantities. An early retrohale shows almost pure pepper with no sympathy for the olfactory nerves. There is a quick and direct shift to a drier and more wood-forward note before the first clump of ash breaks off, with pepper still remaining a good chunk of the flavor though starting to back down in small, measured steps, but with the flavor becoming a bit drier the pepper stands out a bit more than it did when it had the thick and somewhat sweet notes to cushion it. 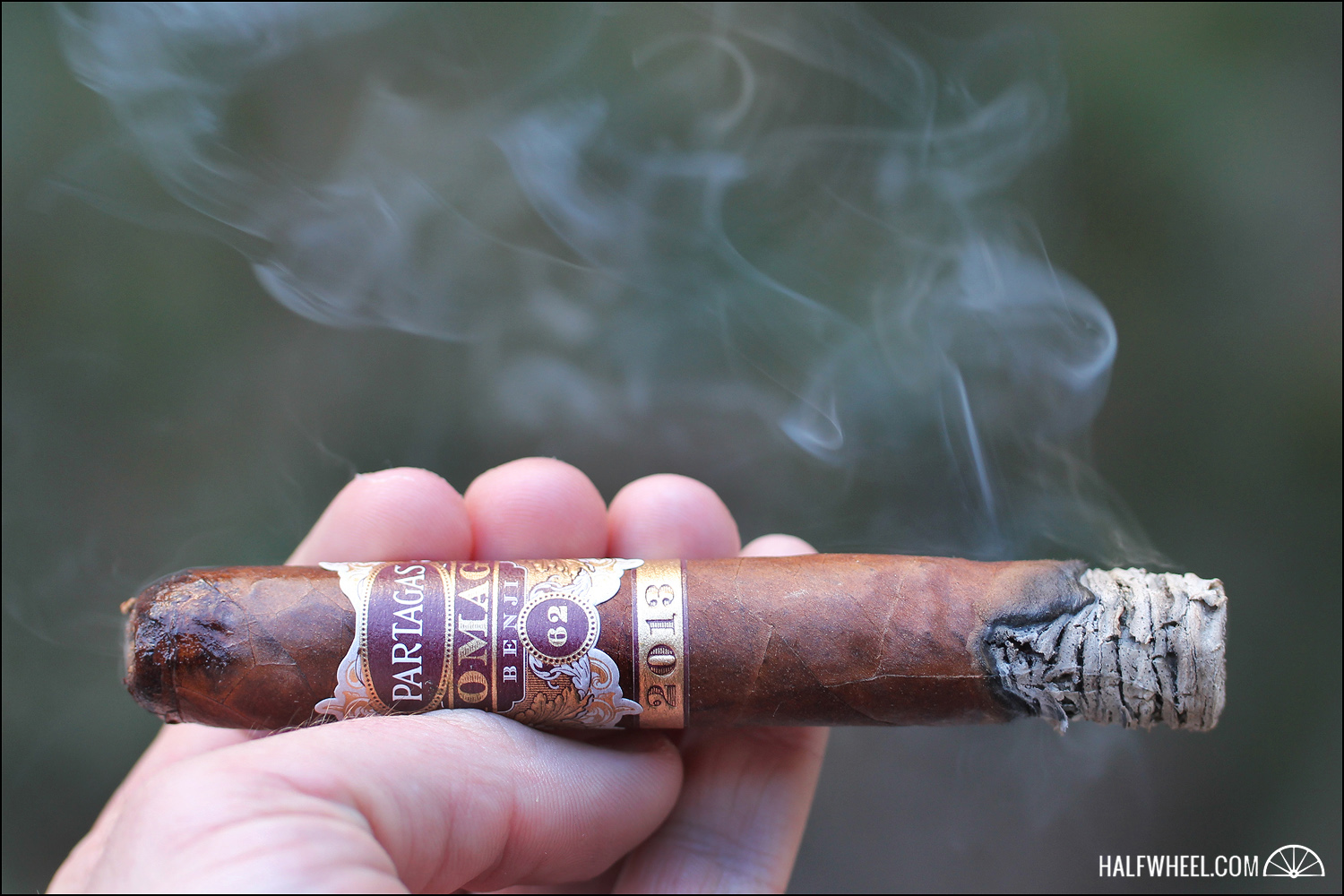 The big, bright notes that started the Partagas Benji Homage 62 Robusto Gordo have by and large settled down in the second third, with a more robust, earthy and slightly peppery flavor profile now in play. There is no shortage of flavor transitions before the cigar gets to the midway point, and while I would have preferred for the sweeter notes to stick around longer, it is an engaging and interesting voyage to this point. Retrohales continue to be too peppery to be enjoyable, leaving that evaluation technique off the table for the moment. Smoke continues to be in plentiful supply, though the cigar seems to be more prone to needing a relight in the second half, extinguishing itself after what seem like normal periods of rest. Burn issues start to become more of a prominent issue in the second third, and even a day of dryboxing didn’t seem to help much on the second cigar. 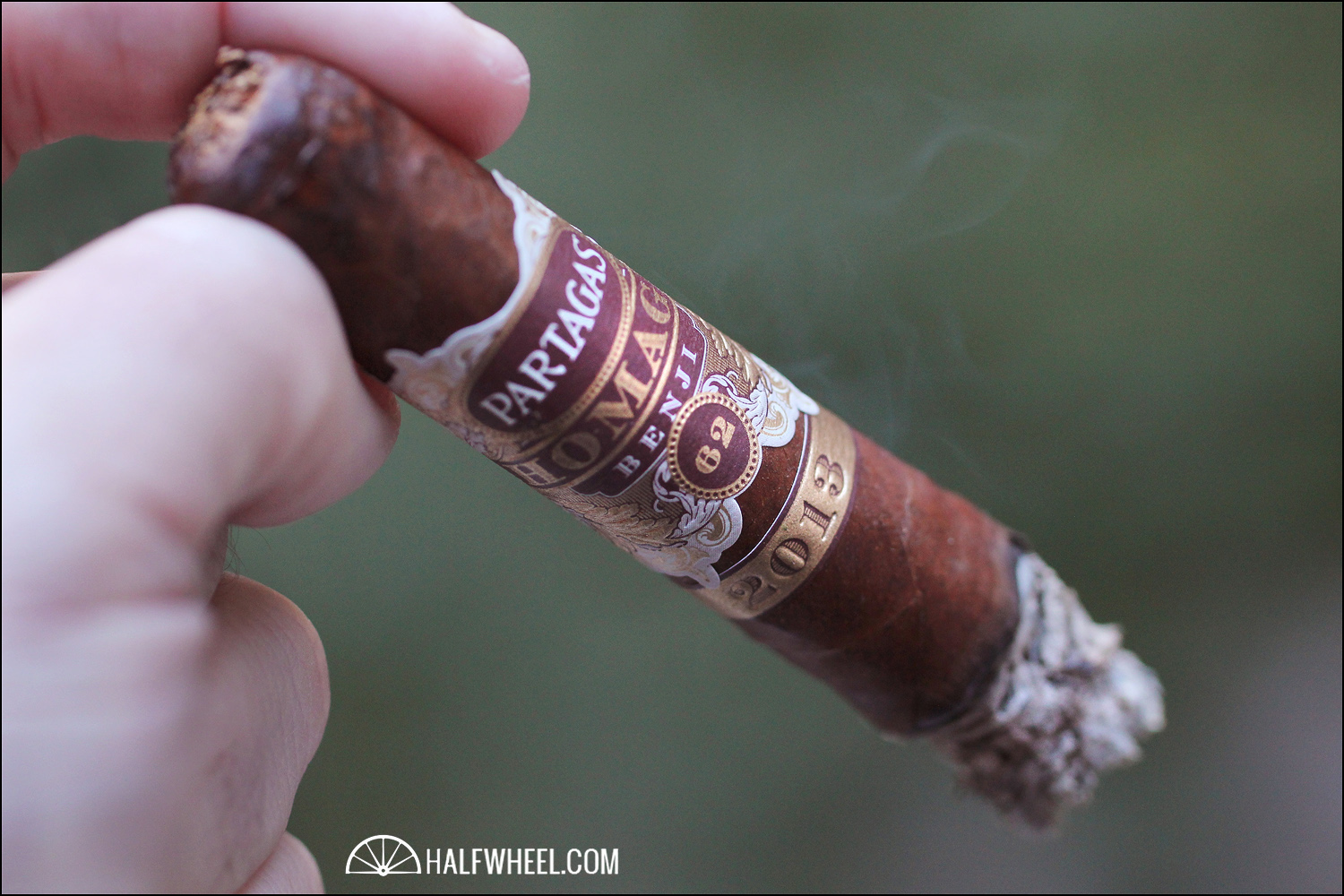 Combustion issues dominate the final third, as several relights are needed to keep the cigar going and overcome what appears to be some issue with either too much humidity or possibly too much oil on the leaves. Flavor-wise, things are much less eventful as far as big transitions, save for the development of a cleaner and punchier pepper note that has partnered nicely with a subtle sweetness to create a duality in the nose that leads the cigar to its conclusion. The cigar keeps its balance admirably and never turns harsh, though the return of the tangy sauce could be seen as a bit off putting depending on one’s palate. I can’t help but think the frequent relights have adversely affected the flavors a bit, an unfortunate consequence that hurts an otherwise very enjoyable cigar. 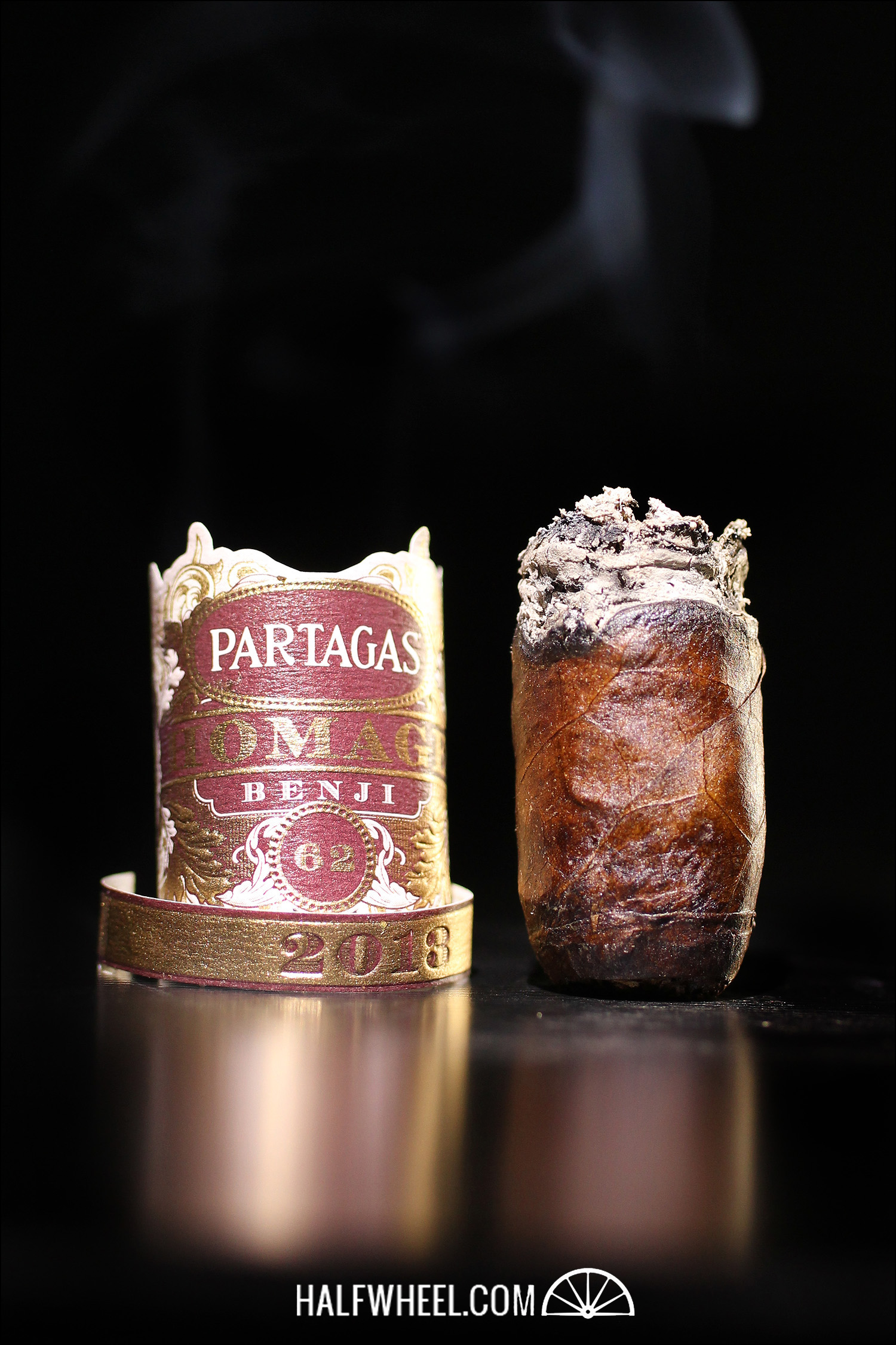 The Partagas Benji Homage 62 was an incredibly pleasant surprise--at least in the first half. Full of flavor and with a good amount of complexity that lasts through the entire first third, the cigar shows a vibrance that I simply haven't found in many recent releases from General Cigar Co. However, technical problems in the second half kept the cigar from completing its progression, and each relight only added to the frustration of trying to get through the cigar while imparting some less than favorable side effects to the flavor. I'm hesitant to say that this will resolve itself with some time, though that is certainly my hope, as a flawless burn from start to finish is all that held this cigar back from being truly outstanding. It's definitely worth trying one now and putting a few down for some rest, as if time resolves the burn issues the cigar currently has, it will truly be a fitting homage to an icon of the cigar industry.