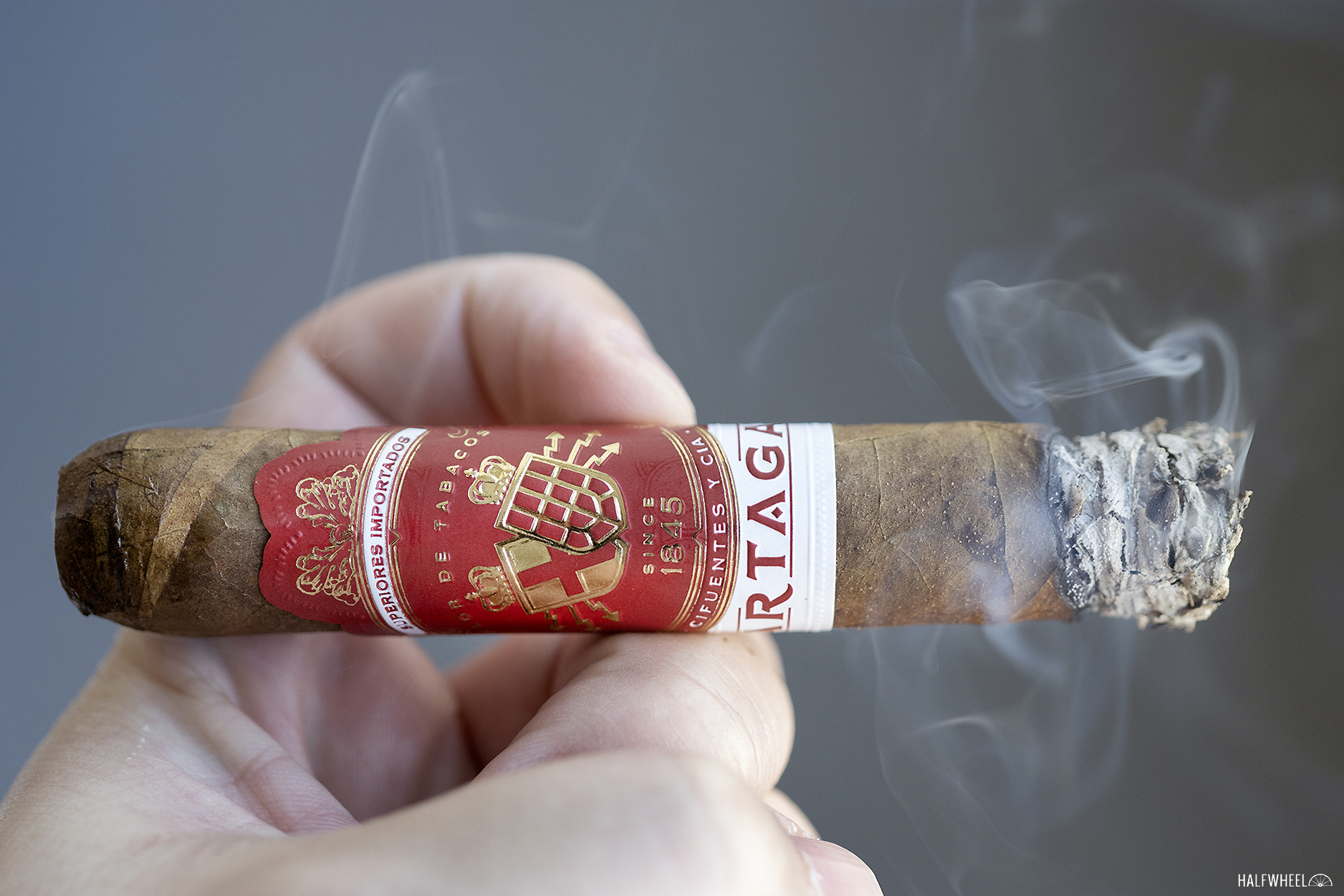 While General Cigar Co.—and its sister division, Forged Cigar Co.—might have the largest offering of cigars of any cigar company, it doesn’t offer very many barberpole cigars.

In March, the company began shipping the Partagas Añejo, a new blend that is offered in two sizes. It uses a barberpole design with a Cameroon wrapper from the 1998 crop occupying most of the surface area of the wrapper, while a Connecticut shade wrapper from 2013 serves as the accent design. The binder is from the Dominican Republic and the fillers are from the Dominican Republic and Mexico.

The line, which comes in two sizes, shipped to stores on March 1:

Forged Cigar Co. has not disclosed the production numbers, but did indicate this would become a seasonal release.

“With Partagas Añejo, we have taken the brand’s long-term association with aged Cameroon wrappers to a new level,” said Matt Wilson, senior brand manager for Partagas, in a press release. “Not only have we created the first Partagas cigar to have a barber pole wrapper, but we’ve also done so with tobaccos that are among the most aged we’ve ever used. Añejo will become a seasonal offering for Partagas, one that will give us the opportunity to highlight the intricacies and nuances of deeply-aged Cameroon wrapper.” 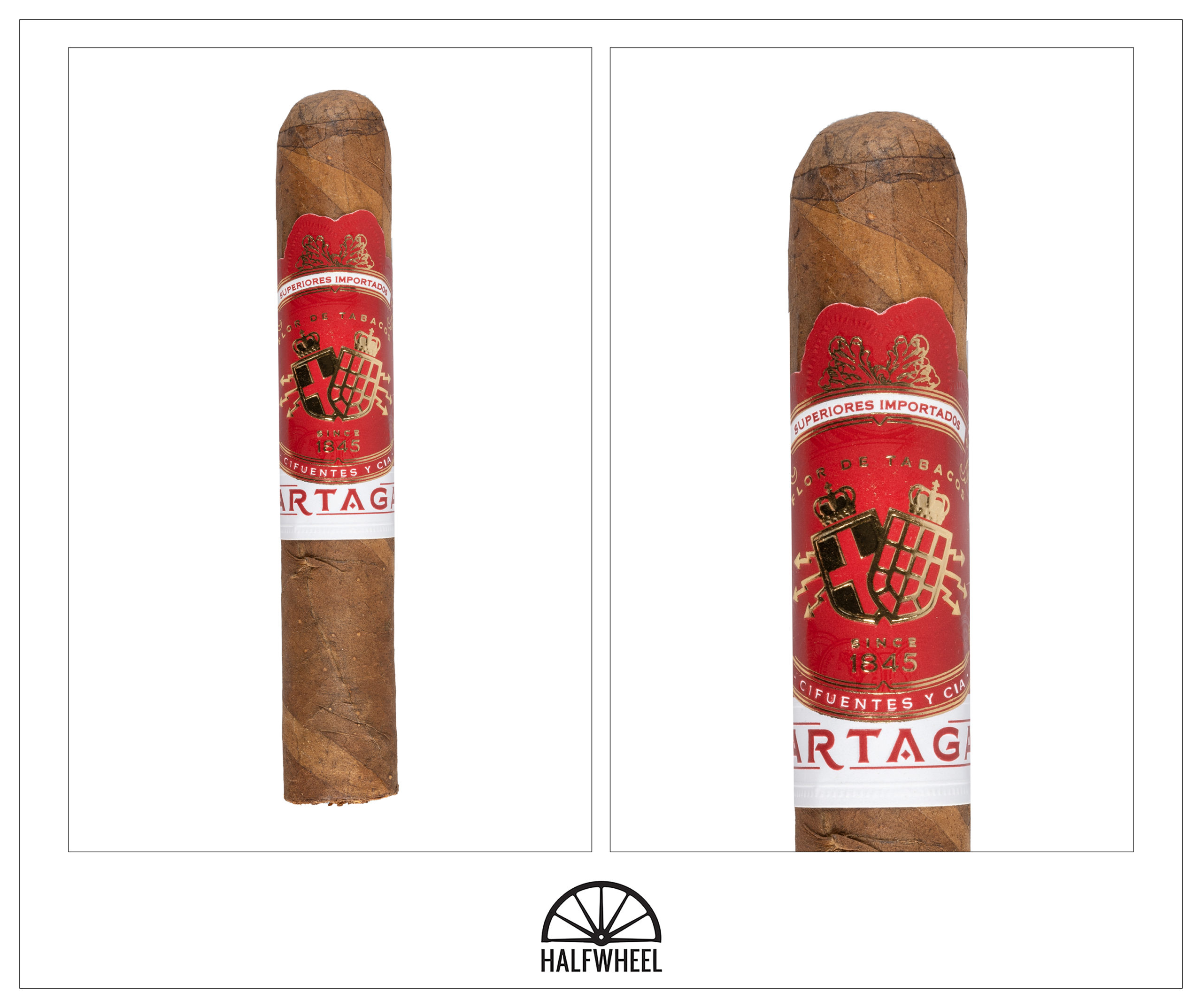 While it’s not the first thing I notice, the Partagas Añejo Petit Robusto has a somewhat peculiar shape. On two cigars, the feet of the cigars are squished and appear almost box-pressed because of it. That is what it is, but the top of the cigar is more tapered than a typical parejo. It’s obviously not a belicoso, but it’s not that far off from being a 109-style cap, a hybrid between a nearly-flat cap like a parejo and a belicoso. Sometimes a barberpole cigar uses wrappers with noticeable contrast—many of the Black Works Studio releases come to mind—this cigar is not that. Instead it reminds me of an Aquitaine Saber Tooth where at a distance the cigar can appear as a singular color. Between the peculiar shape, lack of contrast and matte-looking wrappers, the end result is one of the least exciting barberpole cigars I’ve seen in quite some time. Aroma-wise, the cigar reminds me of walking through a Sherwin-Williams store. It’s not a paint-smell in the sense that I think paint got into the cigar, rather, it smells like a paint store or the paint section of a hardware store: some of the chemical paint smells, wood, something that reminds me of certain types of cardboard. While it’s not the most appetizing of smells, it’s a combination of aromas that works well with one another. The foot smells much more like how I expect cigars to smell: sweet cocoa, a very defined black tea flavor and a touch of white pepper. Cold draws have some very artificial chocolate flavors—almost like a protein shake—some red grapes, creaminess, a touch of leather and a bright tartness at the back.

On the second sample my notes on the first puff are, “this is a fine enough start but this tastes like a cigar from a different era.” It’s somewhat herbal with earthiness, sweet chocolate and bark coming up through the end. There’s surprisingly little change between the first puff and the puffs I’m tasting after smoking an inch of the cigar. Earthiness is accented by some herbal flavors, straw and white pepper. It finishes more enjoyably than the main flavor: oatmeal and nuttiness overtop cinnamon. After about 20 seconds, some creaminess emerges and overwhelms the other flavors. The reason why I find the finish more enjoyable than the main flavor has nothing to do with the lists of flavors; rather, the main flavor is too sharp and has a habit of getting harsh if I push the cigar a bit too much. Retrohales have creaminess and nuttiness over some generic sourness. The finish has cinnamon, ginger, white pepper and some heavy leather notes that really coat my throat. Flavor is medium-full, body is medium-plus and strength is medium. Construction on all three cigars is fantastic during the first third.

By the halfway point of the Partagas Añejo Petit Robusto, I could really go for some water. My palate is slightly dry, but the larger issue is that there’s a very thin line between the flavor profile being “sharp” and “harsh.” Unfortunately, when the cigar becomes harsh, it takes 10 or so minutes of slower puffing to get rid of the flavor. Flavor-wise, it’s pretty familiar: earthiness and oak accented by white pepper, herbal flavors and liquid smoke. The finish is much thicker, almost coating the palate like how a gravy or a thick sauce would interact with the taste buds. Flavor-wise, there’s oatmeal and pecans over straw and white pepper. Retrohales get much harsher in the second third, as there are herbal flavors, mineral flavors and chili pepper. They finish with chili pepper at the back of the throat, cinnamon in the nose and faint notes of creaminess and lavender. To put it in some context, the cinnamon and chili pepper are probably an eight out of 10, the creaminess and lavender are closer to a two. Flavor is medium-full, body is medium-full and strength is medium-plus. Construction continues to be fantastic. 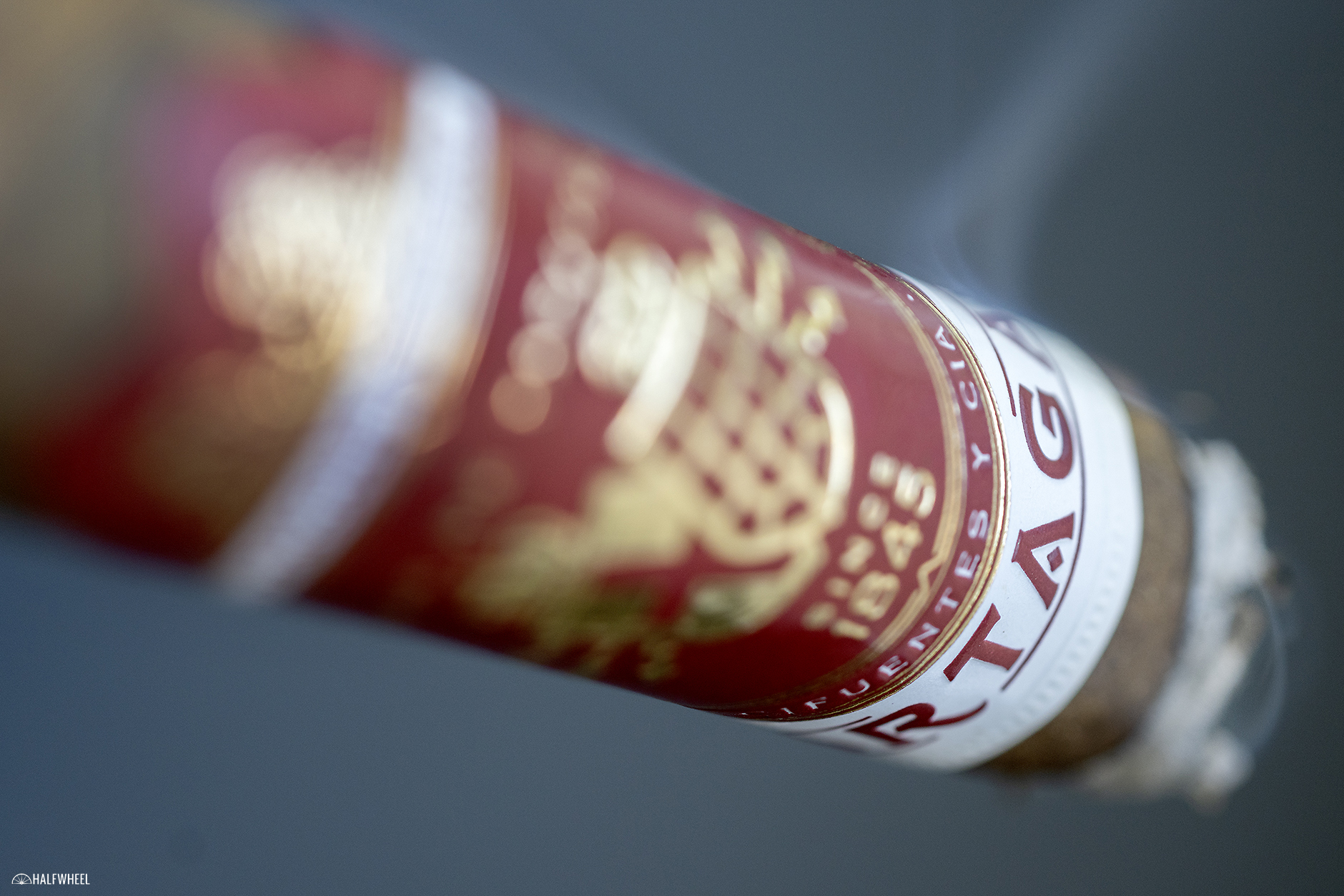 Fortunately, I’m able to get both the harshness and the sharpness to recede quite a bit in the final third. The softer profile is led by leather and creaminess, but there’s a touch of saltiness and a similar amount of white pepper. It’s interesting to think that the harshness wasn’t the result of an isolated pepper flavor being too strong—sometimes that happens—here it was a problem with the entire flavor profile just being too concentrated. The finish sees the white pepper get stronger, but it’s unable to challenge the creaminess that now coats the apart after each puff. Whenever I want some contrast, retrohales provide large doses of white pepper and chili pepper. At times, I can taste some flavors that remind me of watered-down bourbon or meatiness, but neither are consistent nor strong enough to make much of an impression. The finish has white pepper over mineral flavors, leather and some chili. Flavor is full, body is medium-full and strength is medium-plus. Once again, construction remains fantastic. 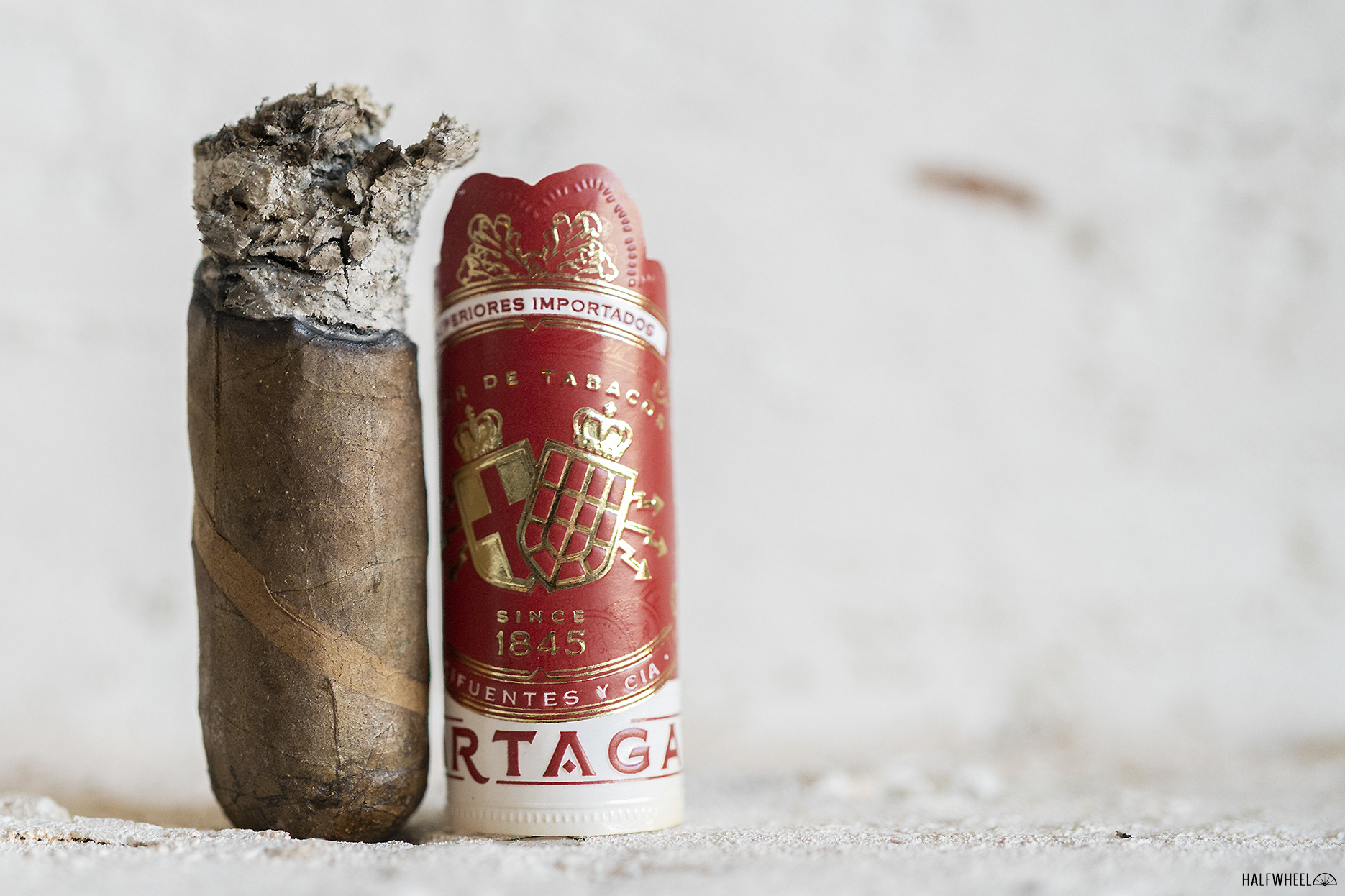 Appearance-wise, it's pretty easy to tell that there's Cameroon tobacco used. Flavor-wise, I don't think I ever would have guessed that's the main wrapper as it certainly doesn't show off the complexity I oftentimes taste with good Cameroon wrapper. To me, the Partagas Añejo Petit Robusto tastes like a lot of the profiles of cigars from a dozen or so years ago, a linear medium-full profile with classic cigar flavors dressed up slightly. I don't think it's a terrible cigar but it's a style of cigar that I don't think is very competitive in the modern market of medium-full cigars. That, combined with the at times somewhat harsh profile creates an okay cigar for $7, but not one that could compete if not for the lower price point.