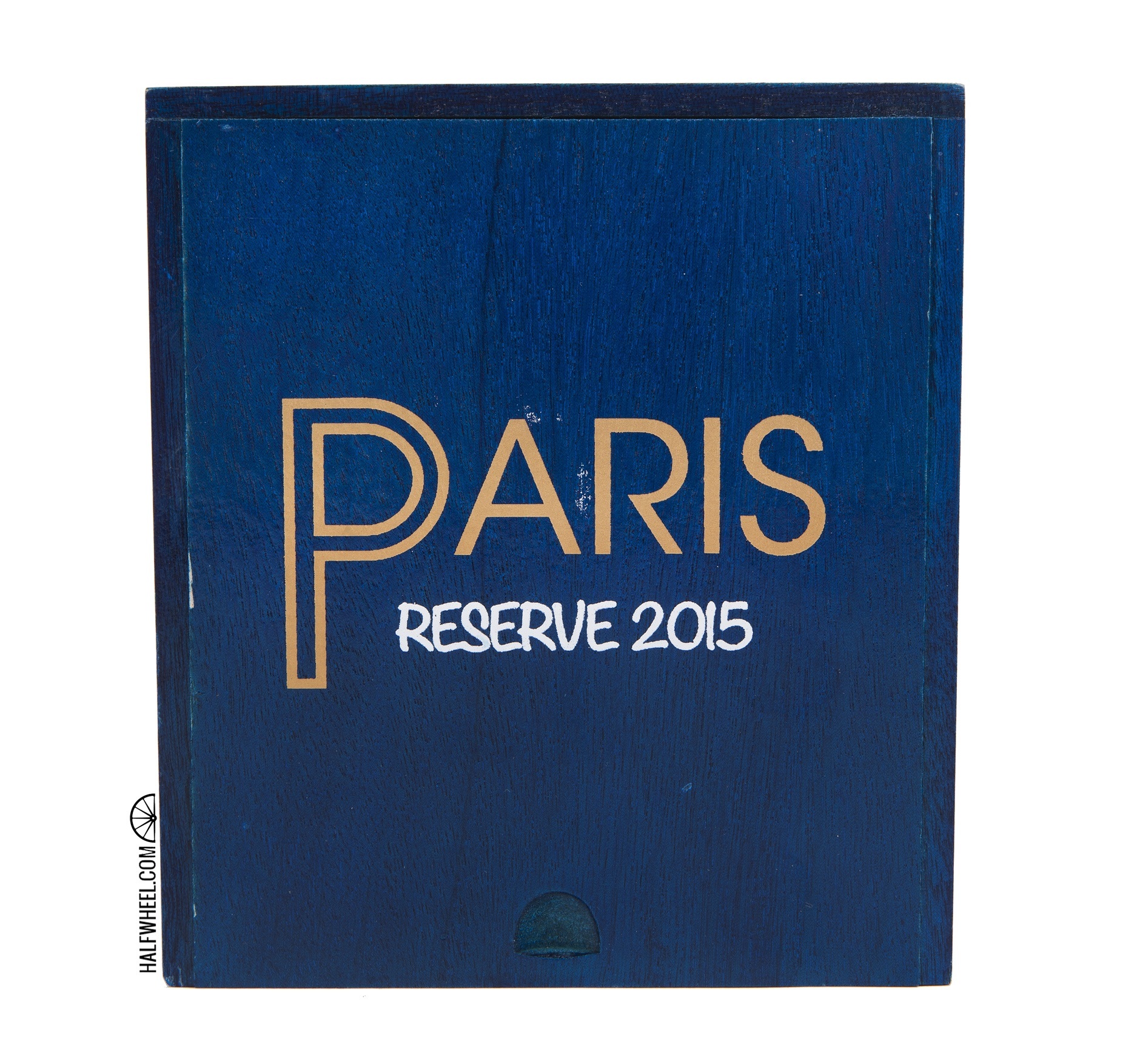 In terms of blend, the Paris Reserve 2015 incorporates a Dominican HVA wrapper covering a Dominican criollo binder along with filler tobacco from both the Dominican Republic and Nicaragua. There were only 300 boxes of five produced with the MSRP of each cigar set at $13, and they began shipping to retailers on Dec. 7, 2015. Physically, the Paris Reserve 2015 is quite the specimen, with a dark espresso wrapper that is sandpaper rough to the touch and quite a bit of oil. There are a number of obvious veins running up and down the length of the cigar, and it is extremely dense when held in your hand. Aroma from the wrapper is a combination of strong earth, leather, manure, coffee beans, barnyard and slight raison sweetness, while the cold draw brings flavors of leather,

The Paris Reserve 2015 starts out slow, with a dominant creamy tobacco note, along with other fairly light flavors of creamy nuts, earth, leather and licorice. There is a very slight sweetness on the finish, but it is just not strong enough to make an impression as of yet. Smoke production is massive off of the foot, and while the draw is a bit too open for my tastes, the burn is close to razor-sharp. The overall strength is quite light so far, ending the first third in-between the mild and medium marks, but still building gradually. The creamy tobacco note that was so strong in the first third of the Paris Reserve 2015 remains the dominant note in the second third, but is joined by a much more noticeable peanut flavor that combines quite nicely. There are other notes flitting in and out as well, namely dark chocolate, espresso beans, earth and cedar, but they are far below the ladder at this point in the cigar. The draw continues to be very loose, albeit still smokable, and the burn continues to be excellent, and while the smoke production has died down a bit, it is still coming off of the foot in wave after wave. As expected, the strength has increased to hit the medium mark, and it is still rising slowly as the second third comes to and end. About two hours in, and the final third of the Paris Reserve is more of the same: dominant flavors of creamy tobacco and peanuts on the palate, with other notes of leather, earth, bakers spices, dark cocoa and cedar bringing up the rear. One noticeable change is the sweetness, which is back after lulling noticeably in the second third, although it is still a very general note. The overall construction is also unchanged, with a too-loose draw and a burn that needs no attention from me at all, along with copious amounts of smoke. The strength hits a high point just above the medium mark before stalling out as I put the nub down with about an inch left to go. I have enjoyed quite a few of La Sirena cigars in the past, including the A and the Merlion Sea Lion, but the Paris Reserve 2015 is just not on that level. Although the profile is balanced, the cigar is too big and the flavors are too linear for my tastes, and I got bored with the cigar right around the halfway point on each of the samples. Having said that both the burn and the draw were fantastic on all three samples. In the end, the Paris Reserve 2015 is a well constructed cigar that is a nice commemoration for a friend of the Ditkowich family, but not something I would seek out unless you are a fan of cigars with ring gauges.