In 2015, Drew Estate announced a partnership with Pappy & Co., the merchandising side of the Pappy Van Winkle bourbon brand.

The resulting creation was the two-vitola line Pappy Van Winkle Barrel Fermented Cigars, made up of a Kentucky Tapa Negra and Mexican San Andrés double wrapper, a Nicaraguan binder and filler tobaccos hailing from Kentucky and Nicaragua.

Fast forward to the 2017 IPCPR Convention & Trade Show, where the two companies were at it again, this time announcing the Pappy Van Winkle Tradition, which was apparently was one of the first blends that Willy Herrera worked on, even before he officially joined Drew Estate back in 2011. The blend was chosen by Julian Van Winkle, president of Old Rip Van Winkle Distillery, after he tried some samples.

“I was invited to Cigar Aficionado’s A Night to Remember by Jonathan Drew in 2016 and was presented with a non-banded, wooden box of cigars with white bands on it that just read ‘Exclusively for my Friend Julian by Willy Herrera Sincerely Jonathan Drew,’” said Julian Van Winkle, president of Old Rip Van Winkle Distillery, in a press release.

“I loved this blend because of its balance, shortly thereafter, my family and I visited La Gran Fabrica Drew Estate in Nicaragua and I smoked the same blend most of the trip. By the end, I knew this would be the Pappy Van Winkle Tradition.”

Blend-wise, the Pappy Van Winkle Tradition incorporates an Ecuadorian habano oscuro wrapper covering an Indonesian binder as well as filler tobaccos from both the Dominican Republic and Nicaragua. The regular release vitolas are packaged in 10-count boxes and all of the cigars are being rolled at La Gran Fabrica Drew Estate in Esteli, Nicaragua. 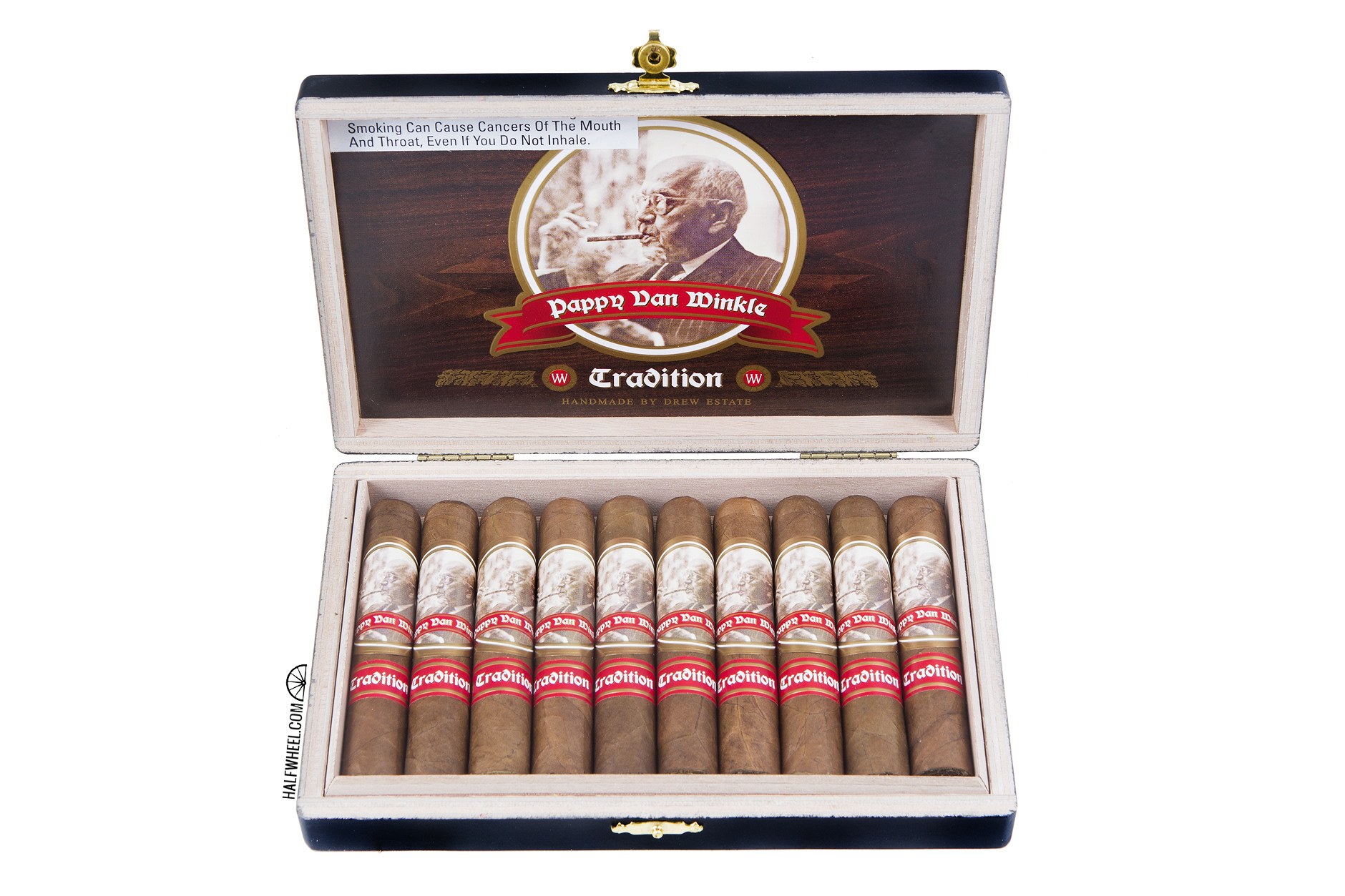 There are seven different vitolas in the Pappy Van Winkle Tradition line.

While the Pappy Van Winkle Barrel Fermented line was sold only on Pappy & Co.’s website, the Pappy Van Winkle Tradition is being shipped to select Drew Estate accounts.  Five sizes are being shipped to retailers, while two of the vitolas are not: the Corona, which will only be passed out by Jonathan Drew, and the Lonsdale, which will be exclusively released at Drew Diplomat events. 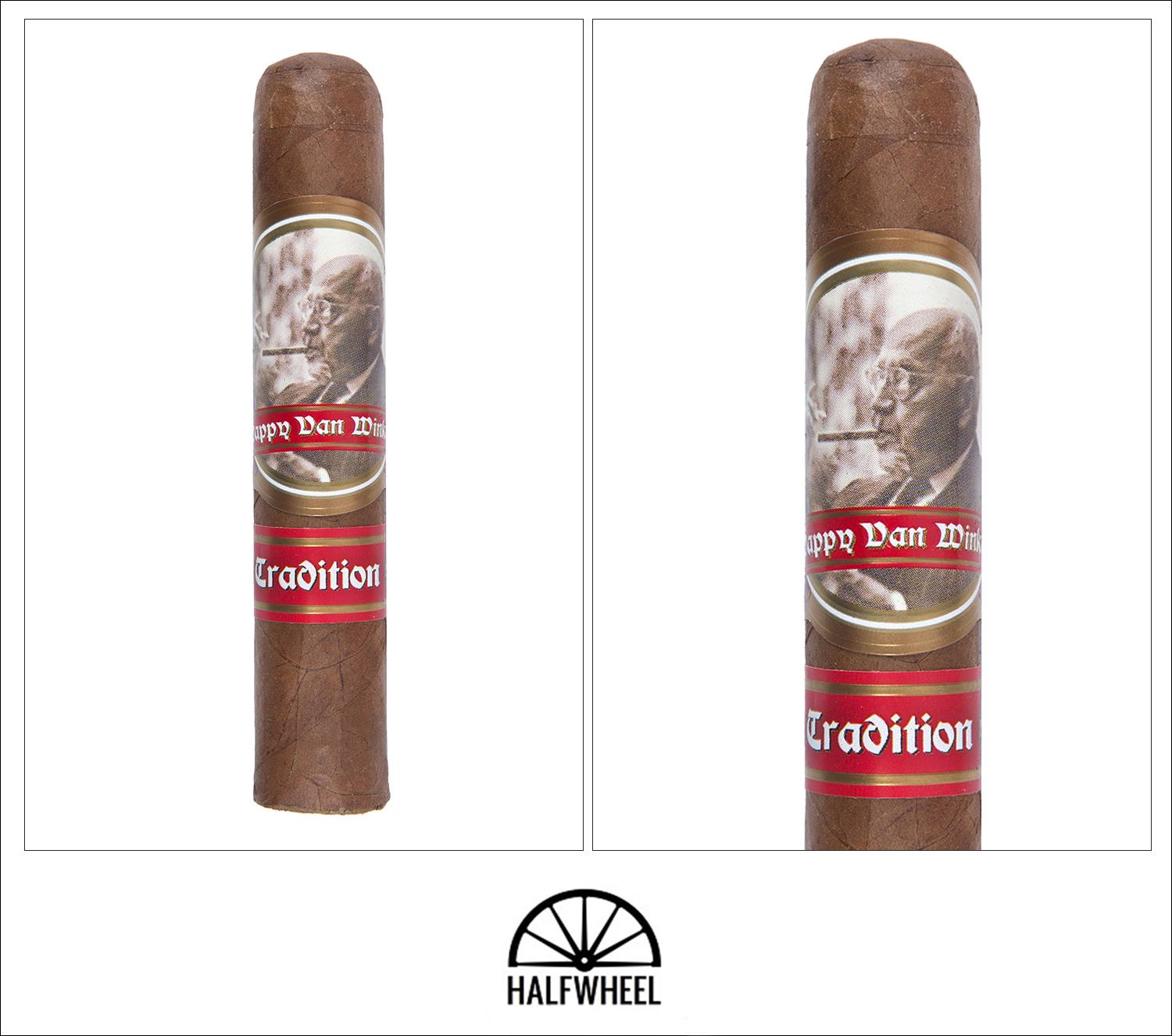 Covered in a rustic, cinnamon brown wrapper that is fairly smooth to the touch, the Pappy Van Winkle Tradition Coronita features two bands that take up at least three-quarters of the cigar. There is almost no oil visible and I can feel a large soft spot directly under the cap. Aroma from the wrapper is a combination of huge dark chocolate, creamy peanuts, oak, earth, manure and raisin sweetness, while the cold draw brings flavors of cinnamon, oak, raisins, graham cracker sweetness, leather and a surprising amount of spice on my tongue.

Staring out, the Pappy Van Winkle Tradition Coronita features an interesting combination of dominant flavors: espresso beans and quite a bit of a floral note. Other lesser flavors of bitter cocoa, leather, earth, almonds and anise flit in and out as well. There is a decent amount of white pepper on the retrohale that is quite strong for the first few puffs before beginning to recede. A slight spice on my tongue emerges and I taste some vanilla sweetness on the retrohale. Construction-wise, the Coronita features a draw that is close to perfect as well as an excellent burn after a v-cut with the smoke production is well above average off of the foot. The overall strength is quite light, starting off and ending the first third in the exact sample place, about halfway between mild and medium. The white pepper on the retrohale begins to dissipate quite quickly during the second third of the Pappy Van Winkle Tradition—although it never disappears totally—while the dominant flavor has shifted a bit to more of a roasted peanut note. Other flavors of hay, dark chocolate, coffee beans, oak and leather continue to be noticeable while the floral note and vanilla sweetness are also still present, albeit at about the same levels compared to the first third. The smoke production is still quite high and the draw continues to impress, while the burn remains excellent. Strength-wise, the Pappy Van Winkle Tradition Coronita is still medium failing to reach the medium point by the time the second third comes an end. 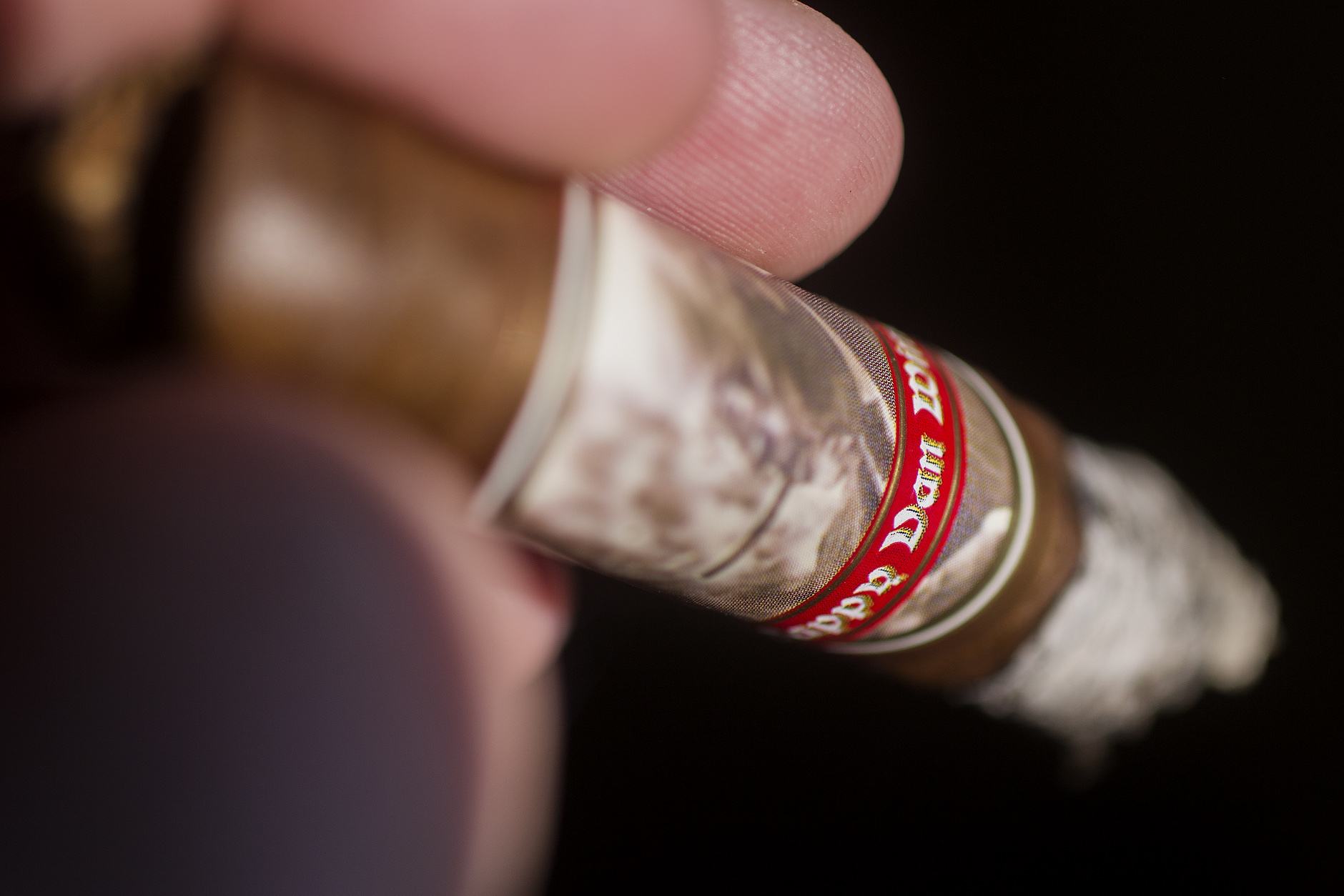 Coming into the final third of the Pappy Van Winkle Tradition Coronita and the profile seems to be almost a carbon copy of the second third: the same roasted peanut creaminess is dominant, interspersed with some floral and vanilla sweetness on the retrohale as well as other notes of oak, bitter espresso, dark cocoa, leather and hay. One thing that is different is the smoke production, which has decreased noticeably, while both the draw and burn continue to give me no problems until the end of the cigar. The strength finally increases a bit near the end of the cigar, but still only hits a point just under the medium mark by the time I put the nub down with less than an inch to go. Honestly, the first thing that came to my mind when I heard about this blend—and the blend that preceded it—was gimmick. After all, it hits all of the high points: using the name of an extremely popular company without incorporating any of said product, a somewhat surprisingly high price point and an extremely limited production. Having said that, the main question I had going into this review was simple: despite the hype, how does it perform as a blend? Well, the answer to that question is pretty well. While one sample had some fairly significant issues that I don’t think are representative of the release as a whole, the other two were clean, smooth and well-balanced, although they never reached a point that I would call complex. Construction is excellent overall, with a great draw on each sample and a burn that only needed to be touched up twice. Yes, the price is too high for what you are getting, but it is easily a good enough blend to try, especially if you like cigars on the mild side.