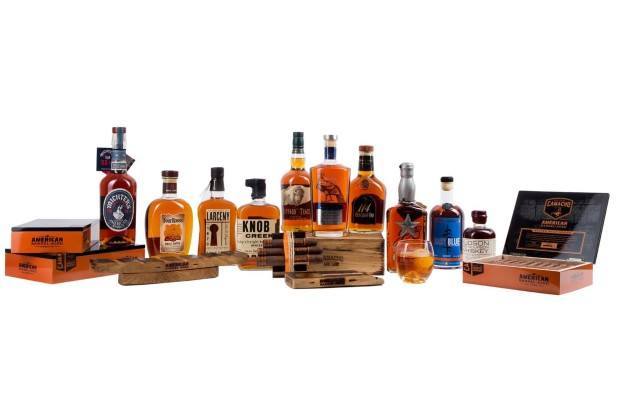 Yesterday was national bourbon day, so it’s only fitting that Camacho’s new American Barrel-Aged heads to stores today. It’s a cigar made with Camacho’s signature corojo tobacco that has been aged in bourbon barrels and in case you haven’t noticed, the bourbon barrel theme is a big part of the release. So the obvious question is: how does the cigar pair with bourbon?

Camacho asked us at Reklame to find out.

So we picked 10 bourbons ranging a spectrum of proofs, price and availability and put them up against Camacho’s newest cigar. Three testers smoked a combination of the three vitolas and drank the 10 bourbons. Because I’m in Arizona and the tasters were in Dallas, I wasn’t invited and instead tasked with putting all of their barely legible notes into a readable post—without even getting to try a drop of bourbon.

We wanted a few bourbons that everyone could find without much trouble and popular enough that you likely had heard of them, enter Buffalo Trace, Four Roses and Knob Creek. 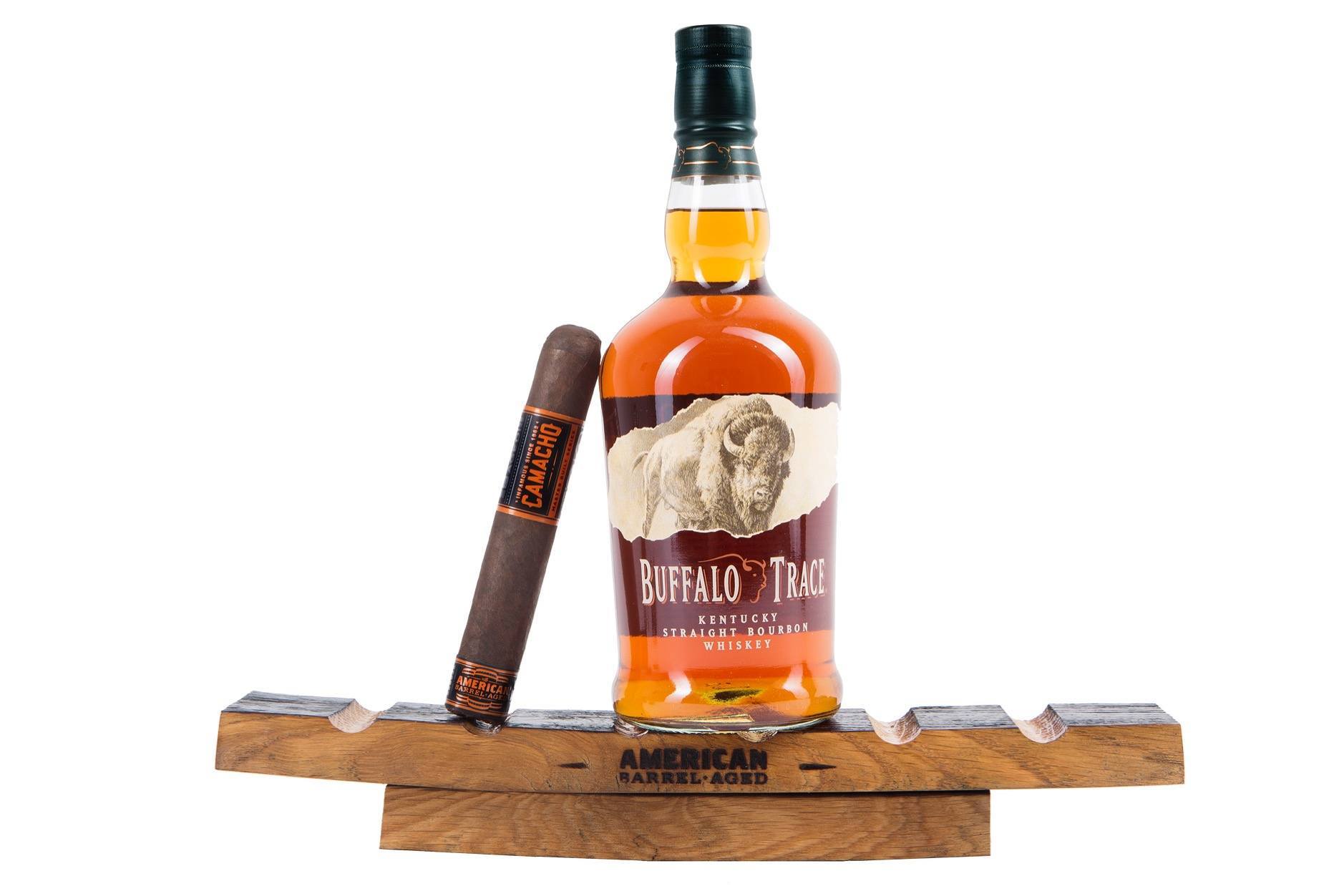 The basic Buffalo Trace is a definitive bourbon workhorse. The tasters found that a visceral blend of spice and pepper emerged from the 90 proof bourbon when paired with American Barrel-Aged, though the cigar was able to stand up to the bourbon just fine. The pairing produced a mix of sweet corn, earth, oak and leather, with burnt sugar and herbal notes through the finish. 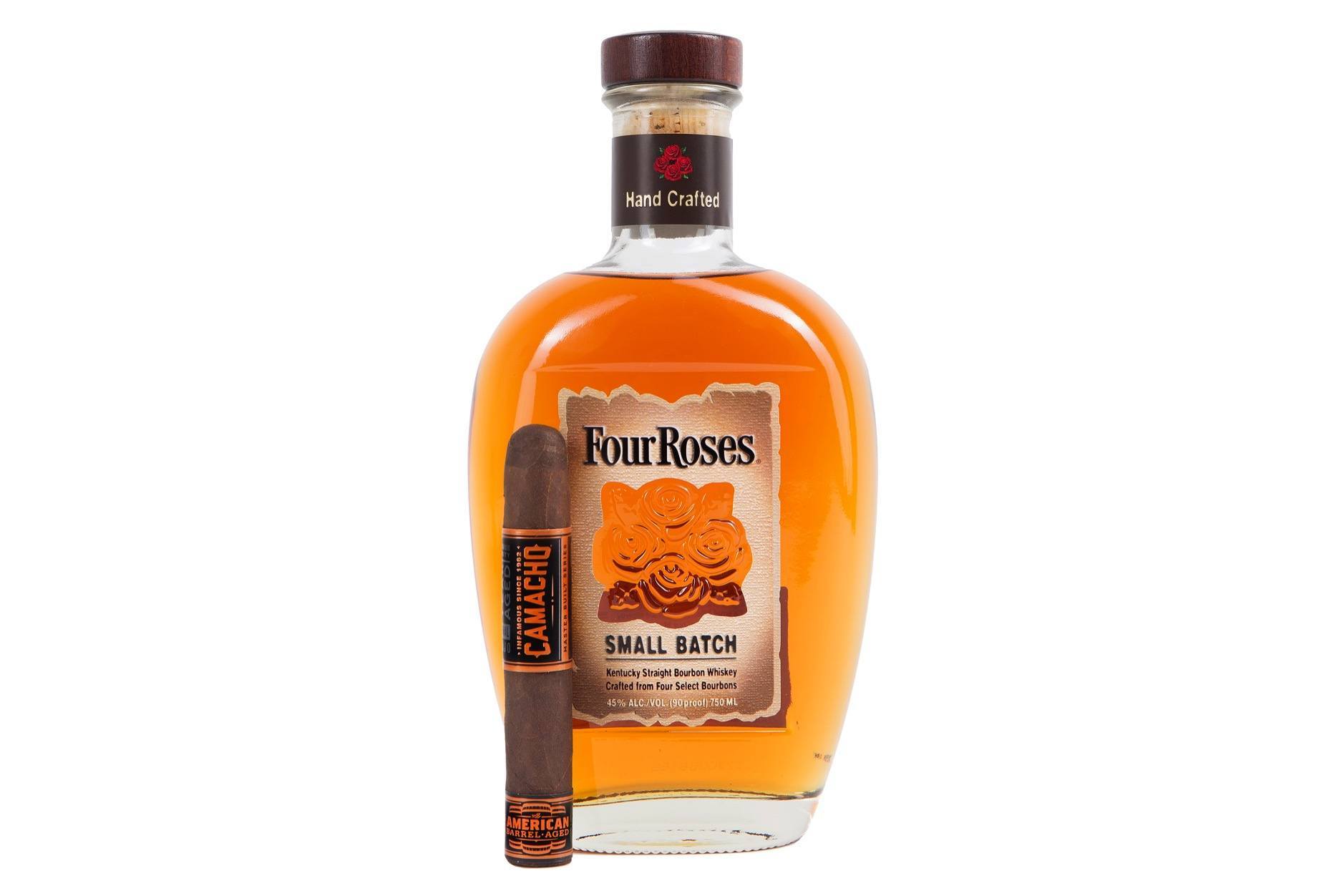 Four Roses Small Batch was undoubtedly one of the winners of the pairing session and that starts with a good bourbon. Its sweet vanilla and orange creamsicle notes transformed into a spicy honey accentuated by heated vanilla and citrus flavors, and a longer woody finish. The pairing provided a lively variation on the prototypical “sweet and spicy” profile. 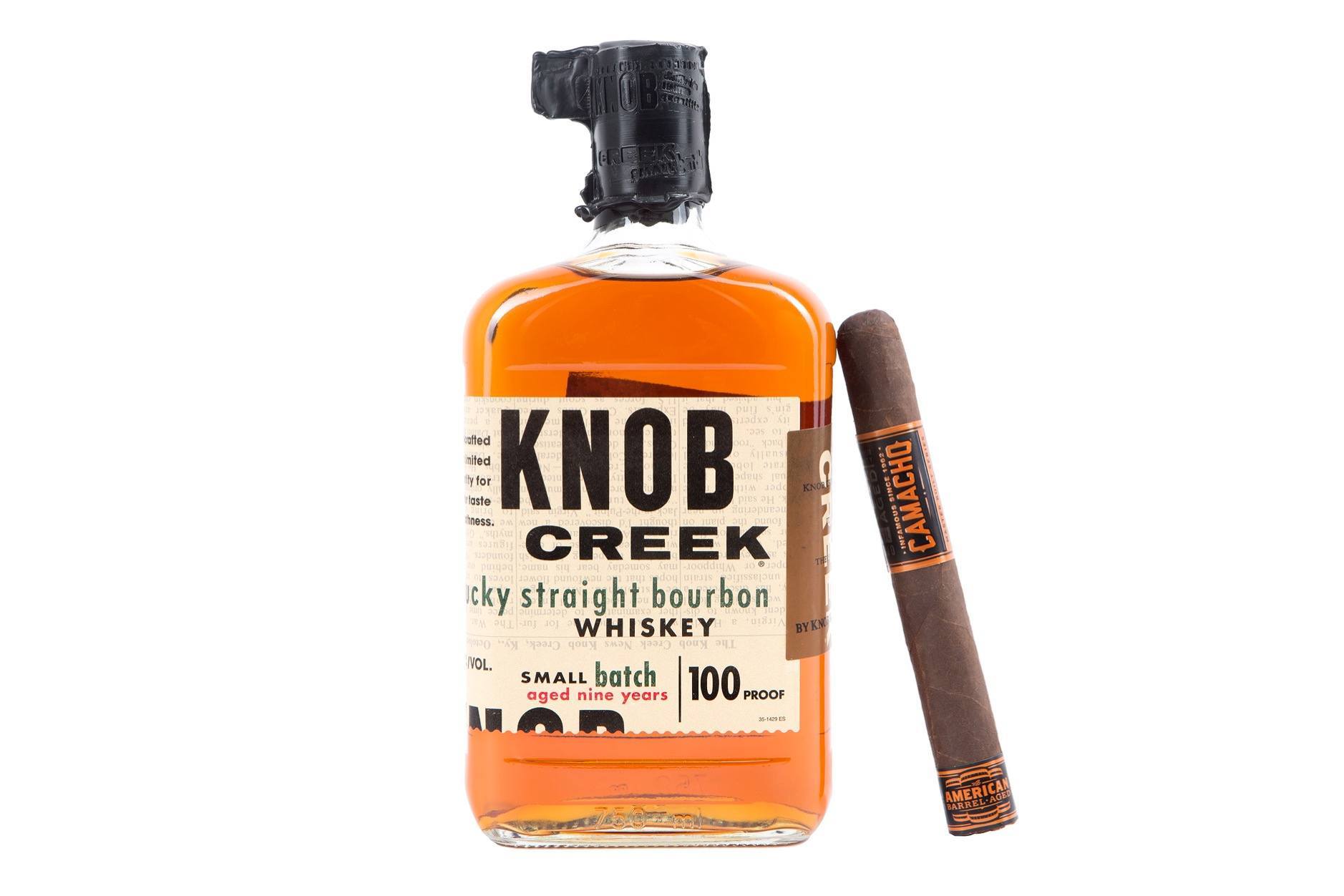 Throughout the pairing it seemed apparent to the three tasters that the Toro (6 x 50) was a bit stronger than the Gordo (6 x 60) and the Robusto (5 x 50) size. That came uniquely into play with Knob Creek’s namesake bourbon. It might be nine-years-old, but the 100-proof spirit overpowered all but the Toro. Even with a couple of the tasters placing ice in the bourbon, it was simply too much to work as a pairing.

The next three bourbons represent products that are available nationally, but not as well-known. 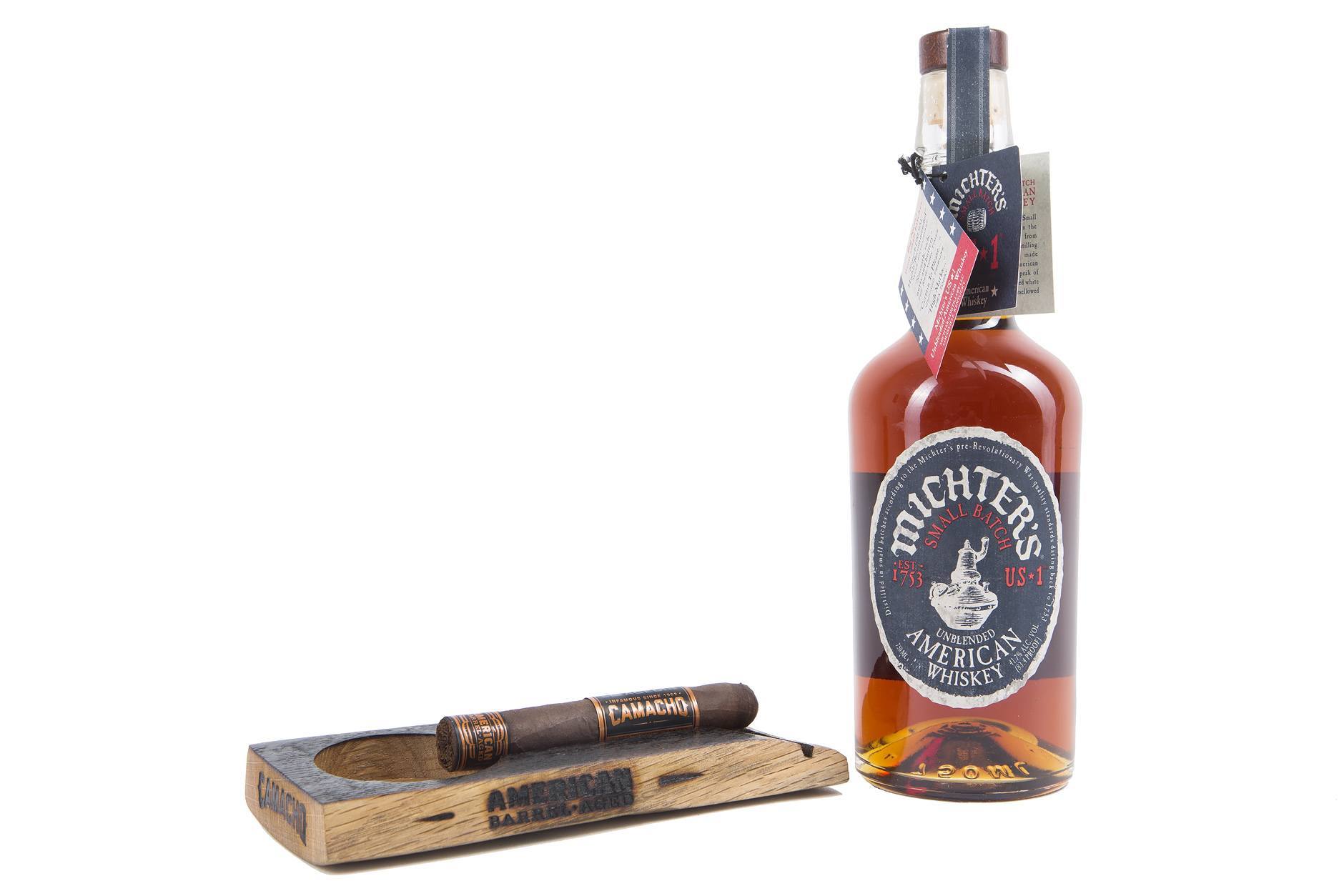 While Michter’s US*1 showed quite a bit of booziness on the finish, the bourbon was actually the lightest in the tasting at 83.4 proof. That served as a problem with the Toro vitola, which overwhelmed the bourbon, but in the other sizes, the bourbon brought out a sweetness in the Camacho with a short and spicy finish. Larceny is one of the newer releases from Heaven Hill. Unfortunately, our tasters didn’t find the 92 proof bourbon to pair well with American Barrel-Aged. It overwhelms the cigar, irrespective of size, and any hints of a particular flavor are muted. 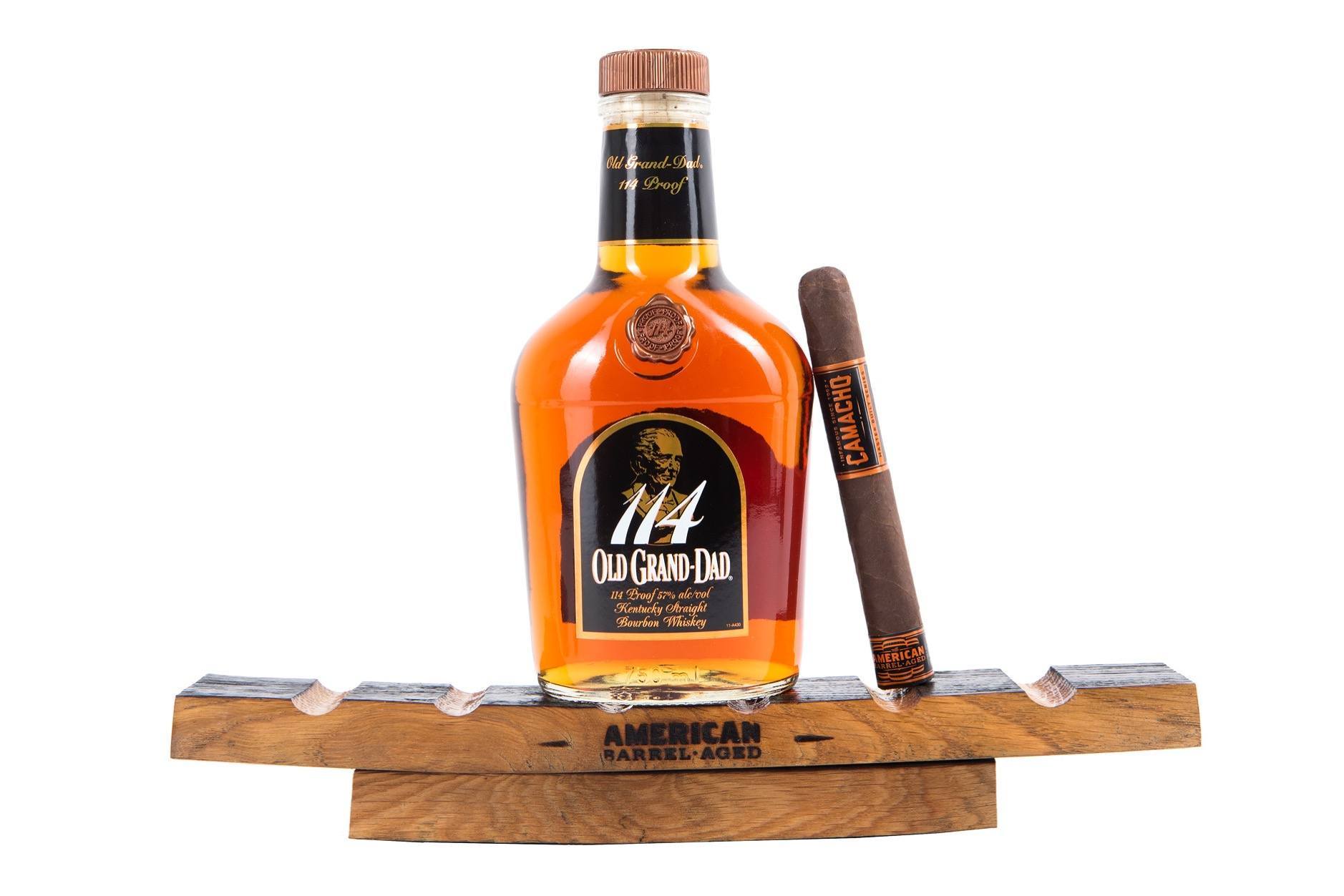 It’s a similar story for the third bourbon in this category, Old Grand-Dad 114. Named for Basil Hayden, of which there is also an actual Basil Hayden whiskey, Old Gran-Dad comes in a variety of forms, with the 114 being the strongest, at 114 proof. That being said, it’s a bourbon with quite a few fans—as for 114 proof the finish can be quite smooth. Unfortunately, it pairs best with water, and not cigars.  A grand total of three descriptors were used on the pairing sheets: booze, spice and black pepper.

The next two bourbons are pricy bourbons from smaller distilleries outside of Kentucky. Hudson Baby Bourbon is made at the Tuthilltown Distillery in New York. It’s developed a solid reputation and despite its smaller production is now found throughout the U.S. While all three of the tasters said they liked Hudson on its own, Baby Bourbon and American Barrel-Aged didn’t work. Oak, cedar and caramel can be picked up, but are overshadowed by excessive bite from the whiskey. Highlight descriptions from our tasters include: “chlorine,” “sour, tar,” and “not happening.” 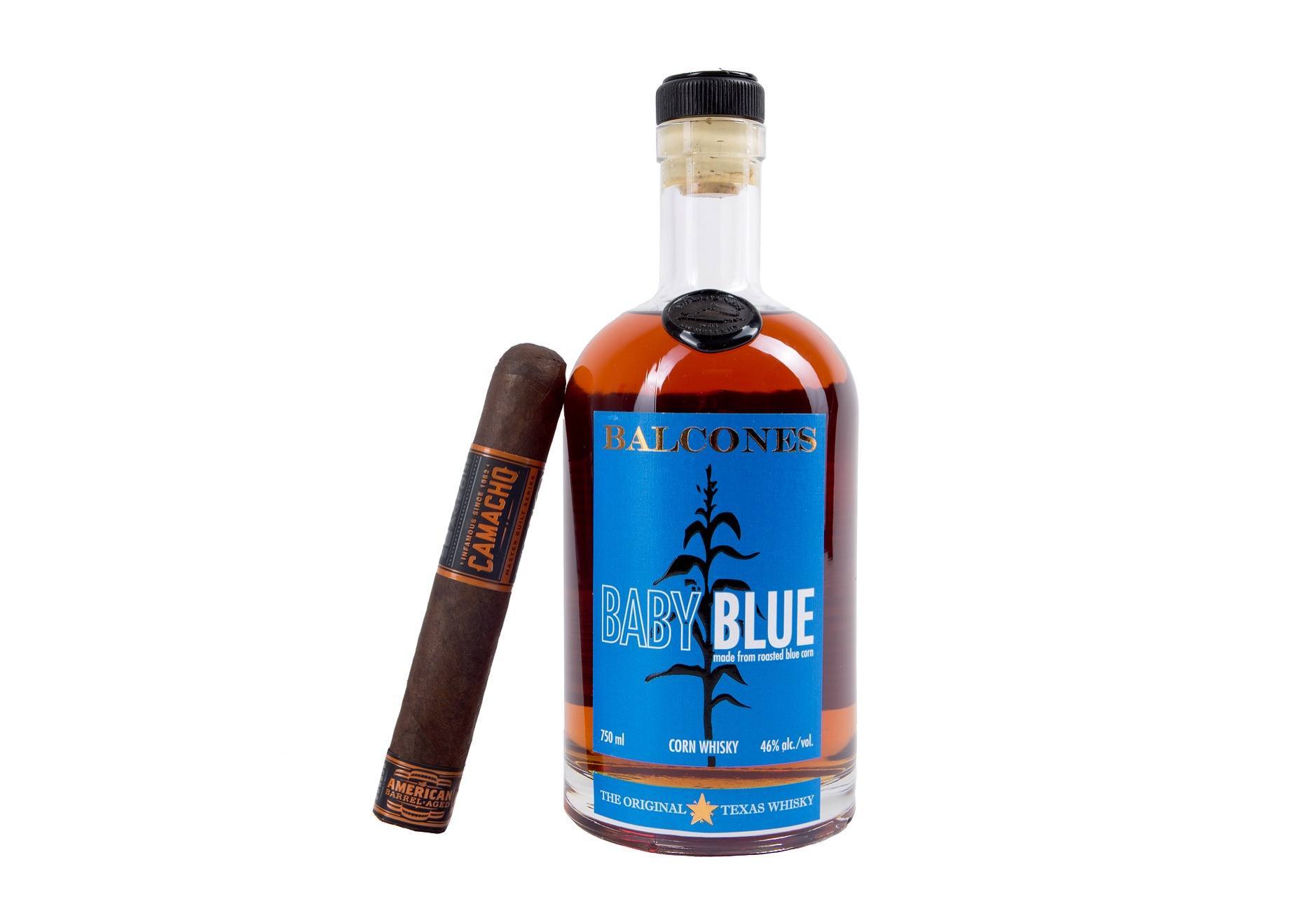 Balcones Baby Blue was the first Texas whiskey to be sold since prohibition and remains one of the most sought after bourbons from the Lone Star State. While the cigar was slightly overpowered by the 92 proof Baby Blue, the pairing was favorable overall. The tasting panel found that the sharper, spicier aspects in the bourbon were smoothed out by the cigar, yielding a sweeter and rich profile, accented by oak, corn and apple flavors. Even the lighter Gordo was able to cut through the bourbon and show off the unique barrel-aged tobacco note. 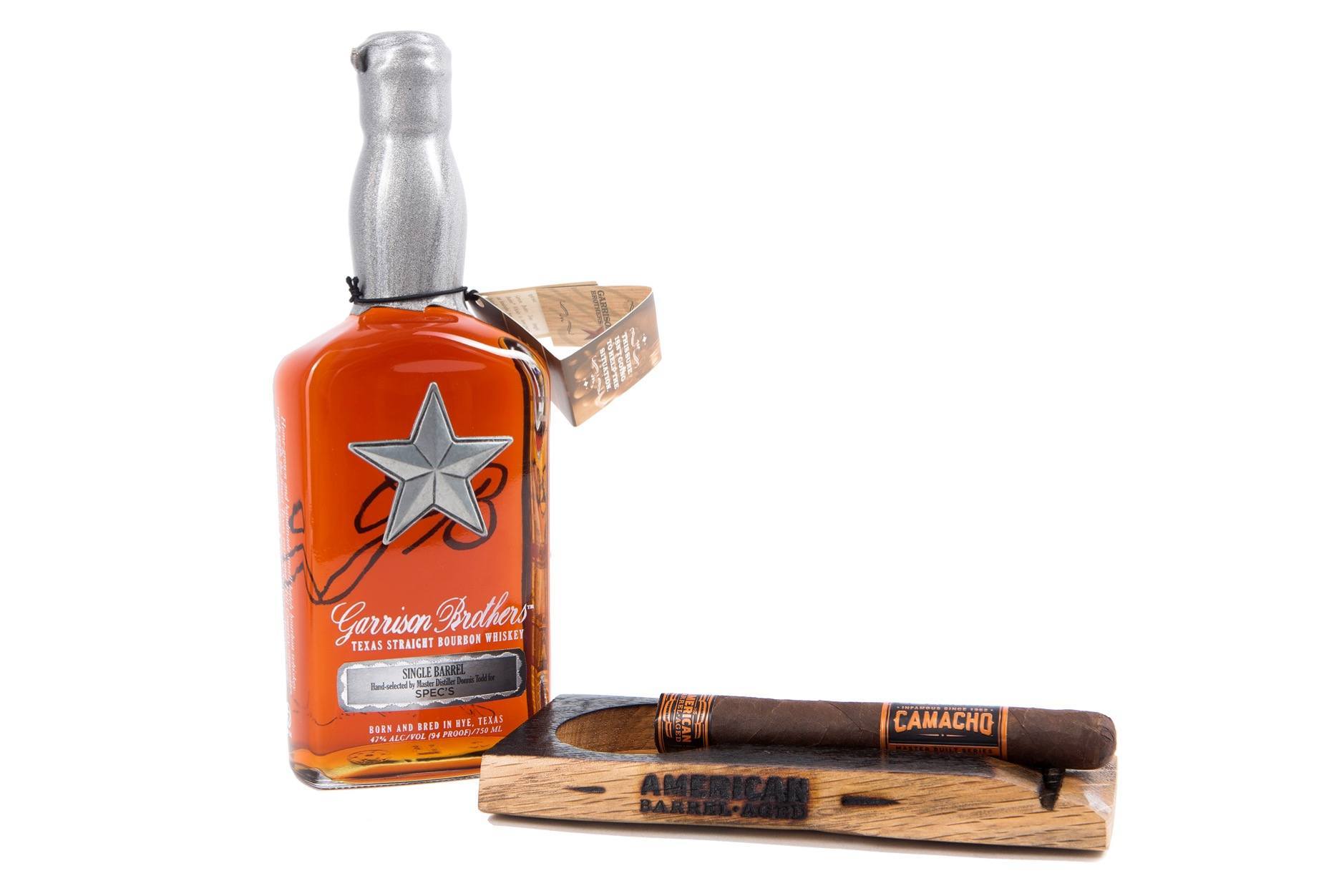 Garrison Brothers Single Barrel is hand selected by Donnis Todd, the company’s master distiller, and each bottle has a ton of handwriting and individual care on it. But then there’s the bourbon. Both the Camacho and the Garrison Brothers bring out favorable characteristics in one another. For the cigar, oak, apple and leather are brought out, along with an increased nuttiness, while the bourbon is smoothed out by notes of candied lemon and vanilla ice cream. It’s not cheap, but it is good. 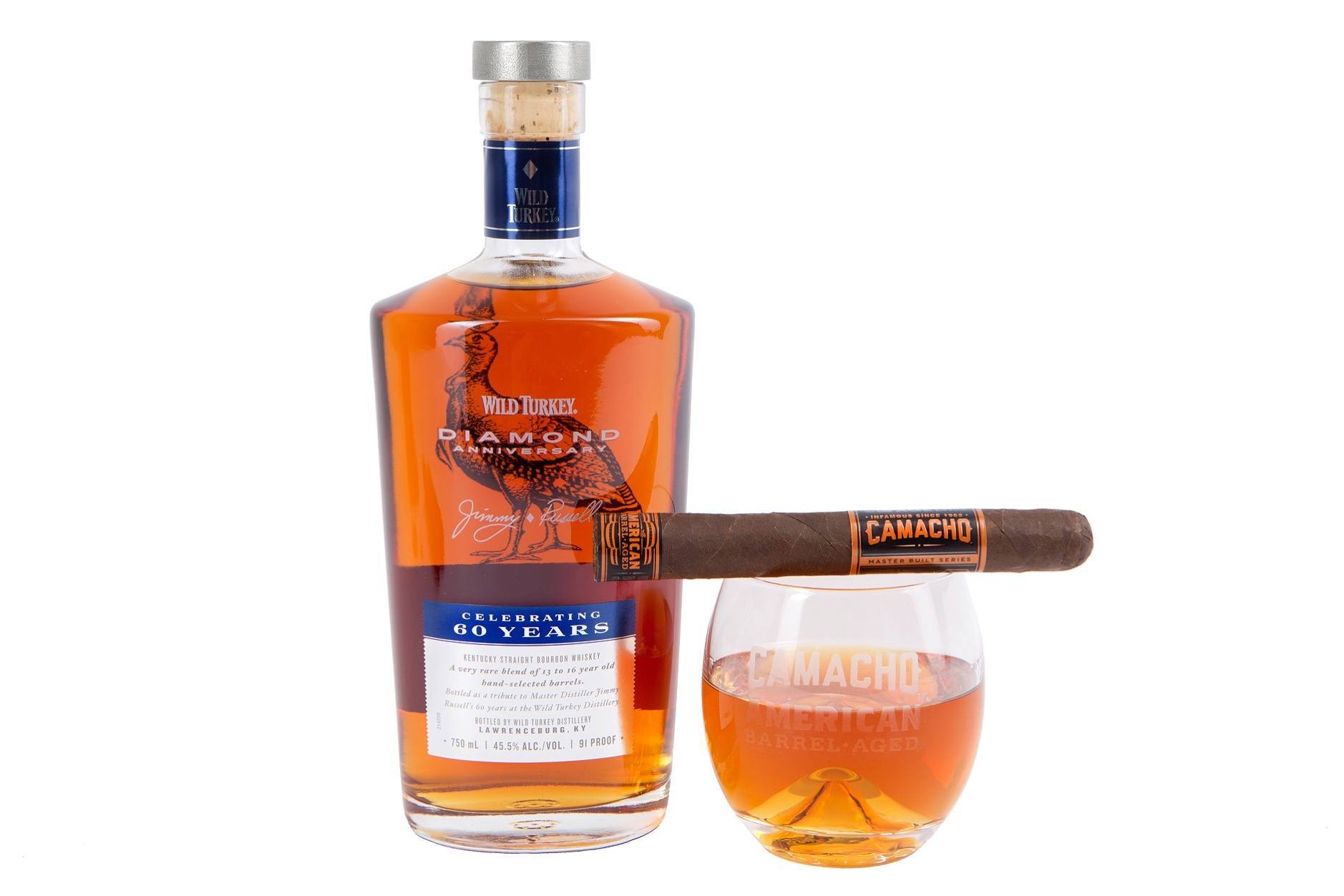 This year, Jimmy Russell, of Wild Turkey, celebrates 60 years in the bourbon business, the longest active master distiller today. To celebrate that occasion, his son, Eddie, blended a bourbon using 13- to 16-year-old whiskies, and thus Wild Turkey Diamond was created.

Pairing the elusive Wild Turkey Diamond with American Barrel Aged greatly accentuated complexity in the cigar, according to our tasting panel. The rich oak and palate-coating smokiness of the 91 proof spirit brought about a thick, creamy cocoa in American Barrel Aged, along with a woody finish, and a distinct mixture of cedar and cotton candy on the retrohale. The Gordo showed mostly grain and general creaminess, while the smaller sizes produced more potent sweet notes. While for the most part, the better bourbon, the better the pairing, our panel found a few important items to remember. One, is that they have to work together and while tasters admitted to enjoying both Michter’s and Old Grand-Dad 114 alone, both struggled as a cigar pairings. On the other hand, there were times in which the panel found that the cigar helped to mask and overcome their issues with the bourbon and vice versa. It doesn’t always work, but when it does, the results can be incredible.

Unlike other cigars, American Barrel-Aged wasn’t made solely to be smoked with a specific bourbon. We threw a variety of one type of whiskey at the cigar, but there’s no reason why your favorite whiskey, no matter what it is, couldn’t work.

There’s only one way to find out, just make sure to invite me this time.