The interesting thing about this cigar is that this is one of the few times in their history that Padrón has produced a private label blend (There was also the Padrón Legacy, which was released exclusivly to Holts to celebrate their 110th year of business and the Famous 70th Anniversary). In fact, the owner of L.J. Peretti had a major influence in what the blend would taste like. He told me that they were looking for a Padrón flavor, but with more power, and less spice and pepper then the normal blends: “More Mellow“. In fact, he told me that there is an extra Ligero leaf in the cigar to give it a little more strength compared to other blends in the line.

This blend was only released in a Maduro wrapper, and they are sold in boxes of 20, and while this is an exclusive blend sold only at Peretti’s, it is NOT a limited release so Padrón will continue to produce as many of them as Peretti’s wants, for the foreseeable future.

“The L. J. Peretti Company is proud to present our 140th Anniversary Cigar. This cigar has been made to our exacting standards by the world famous Padrón family…Seductively dark and rich, this cigar is full bodied without being overpowering. A masterpiece of the cigar maker’s art.” But enough chitchat, let’s get down to business, shall we? 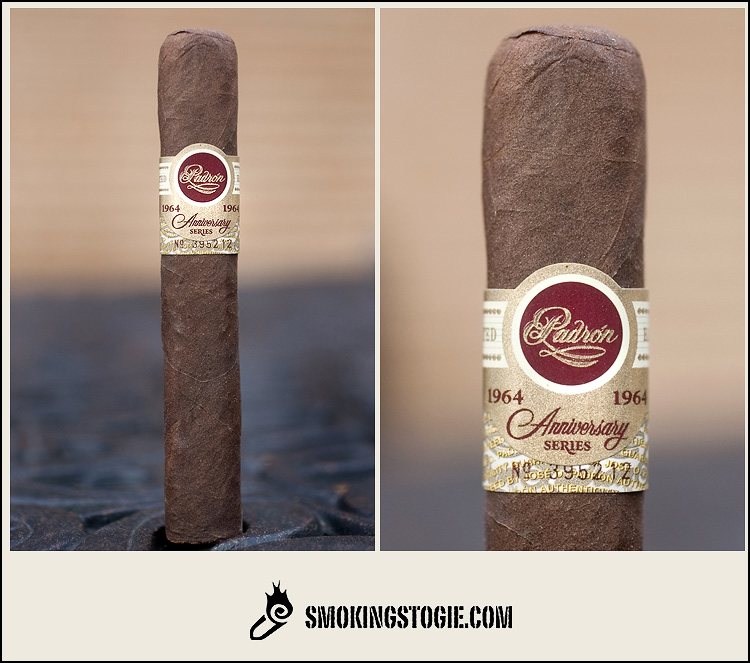 The cigar itself is as wonderfully constructed as any Padrón. A dark brown wrapper, it is a maduro, after all, that is totally seamless is wrapped around a extreme box pressed stick. Although the cigar is 5×50, it really looks smaller then that in your hand. The cigar is extremely hard when squeezed, almost rock hard, and the wrapper actually has very little smell to it, a bit of wood and pepper.

Pre-draw is very sweet with just a bit of spice on the tounge, and a particluar flavor that I cannot place (maybe apple?) that is quite interesting. There’s defintely less spice on the pre-draw then a regular Padrón 1964.

The first third starts off with a bit of spice that quickly dies down to almost nothing. Flavors include a strong barnyard notes, along with hay and espresso. There is a slightly bitter woodish undertone as well that stays fairly consistant throughout the first third. I can already tell this is a stronger cigar then I am used to with a Padrón. 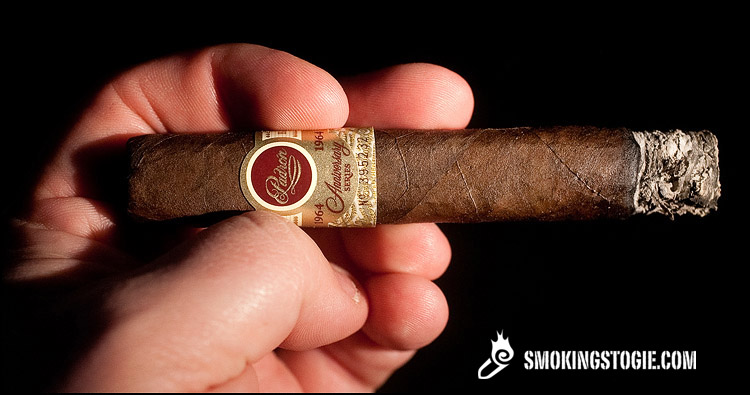 The second third has much the same flavors with a bit more hay in the profile, but they seem to be slightly muted. The small amount of spice that was present in the first third has almost totally disappeared into nothingness, although I am still getting a small amount on the retrohale. However, the profile is noticeably more full bodied as well, and continues to get stronger as the last third ends. The burn is also on and off during the entire third and I had to re-light a few times. The final third is much the same as the second third. Not much change in the flavor profile at all except for a slightly bitter undertone, but the cigar keeps getting stronger until it is a VERY full cigar at the end. The Bottom Line: I could not help but think as I smoked each one of the samples of this cigar, that the very thing that makes the regular 1964 blend so great is ultimately the downfall of this blend. While it was not a bad cigar by any means, and I truly doubt that Padrón COULD put out a bad cigar; the spice, pepper and sophistication that I enjoy in so many of their cigars was missing. I was really hoping that this blend could give my go to Padrón (the 1964 Exclusivo Maduro) a run for it’s money, but sadly, it was not even close. Throw in the burn issues, which were extremely unusual for a Padrón, and what you have is an extremely strong cigar with very little of the same flavors or finesse that I have become accustomed to from Padrón. Having said that, if the pepper and spice of a regular 1964 is too much for you and you are looking for more strength, this blend will probably be right up your ally.