It’s been 46 years since José Orlando Padrón started selling cigars. Having sold over 100 million cigars to date, Padrón is one of the most prestigious brands out there today. The skill and passion they have for cigars is obvious in the many different cigars they release. Whether you are smoking a Padrón 2000 or a Padrón 80th Maduro, the care, quality and flavor is obvious.

When the Padrón family releases an anniversary cigar it does not hold back on using the best tobacco they have. This year’s Family Reserve No. 46 contains all Nicaraguan tobacco aged anywhere from eight to ten years, and is crafted in Estelí, Nicaragua, at Padrón’s Tabacos Cubanica factory.

If you have smoked a Pardon Anniversary cigar you will know that the construction, appearance and flavor are often flawless. Total yearly production of the Family Reserve No. 46 will be around 40-50,000 cigars, and it will come in boxes of 10. There have been rumors of a Natural version as well, as there were with the 45th and 44th, but that has not been confirmed as of yet.

Here are some photos on the box itself. 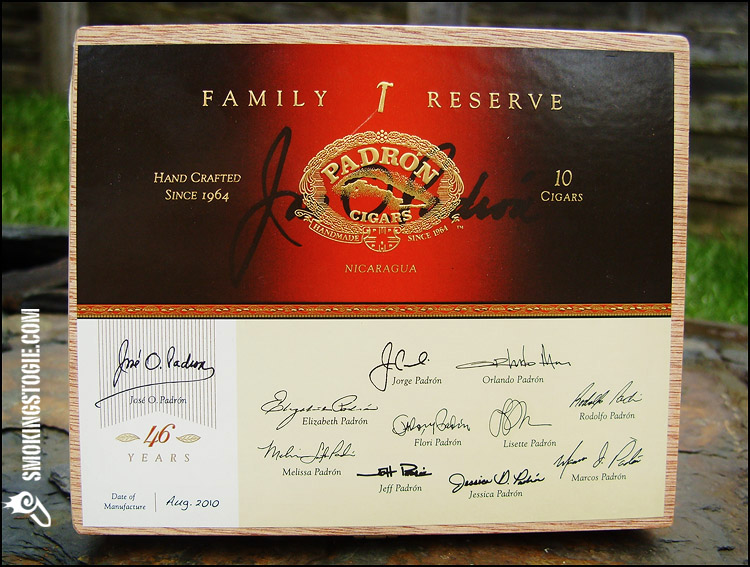 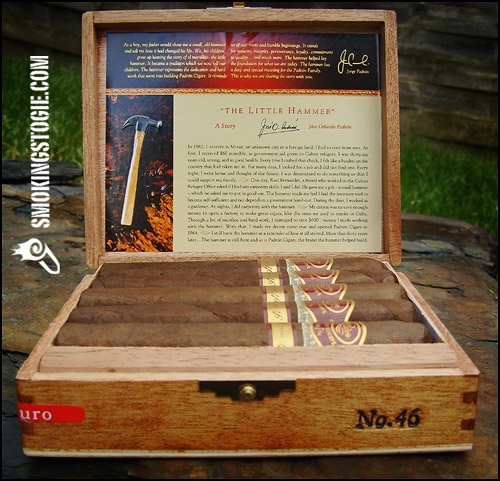 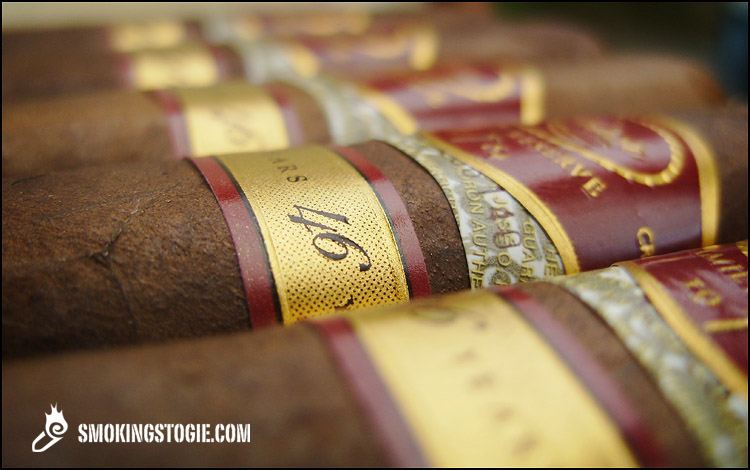 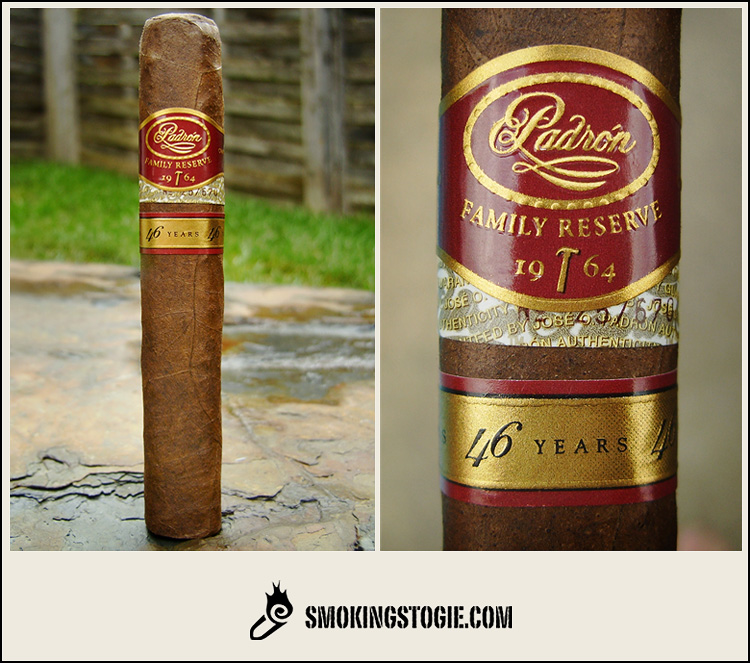 One thing I know for sure, I don’t need to tell you how gorgeous this cigar is, but I will anyway. It has a red, dark chocolate maduro wrapper with a dramatic box-press, although not quite as square as last year’s 45th and an extremely toothy wrapper. It also has a very solid, firm, feel to it, and the cigar just screams “quality.” It has a nice nutty, chocolate aroma with a touch of spice. The cold draw is very mellow and taste of wood, hay and a bit of leather.

Starting off in the first third the cigar lights up with ease. Right away I am getting a thick smoke with lots of spice through the nose! There are flavors of cocoa, coffee, and a very earthy note. There is a sweet creaminess on the tongue along with the spice, creating a nice contrast, a very nice start indeed.

Coming into the second third, the cigar is just getting better and better. There is a nice mellow wood flavor present. The cocoa note has diminished a bit but in its place comes a nice roasted nut flavor. The smoke is very lush and creamy and feels amazing in my mouth. The finish is full of earth, coffee and leather and it’s balanced perfectly. Each flavor is present in just the right amount, and they all compliment each other perfectly. 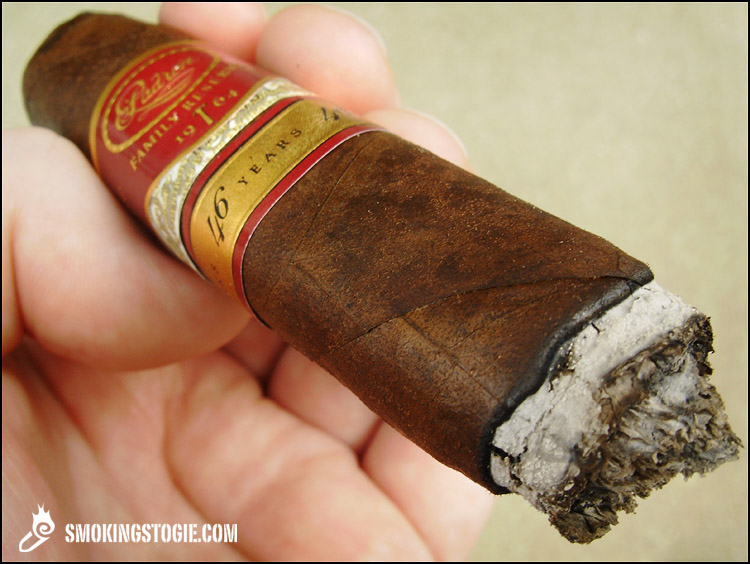 Finishing up in the final third, the spice that has been present throughout the cigar has pretty much died. The cigar is still very creamy and the flavors of wood, coffee, nuts and leather have become even bolder. Each draw seems to reveal a different flavor, and the earthy finish is just amazing. 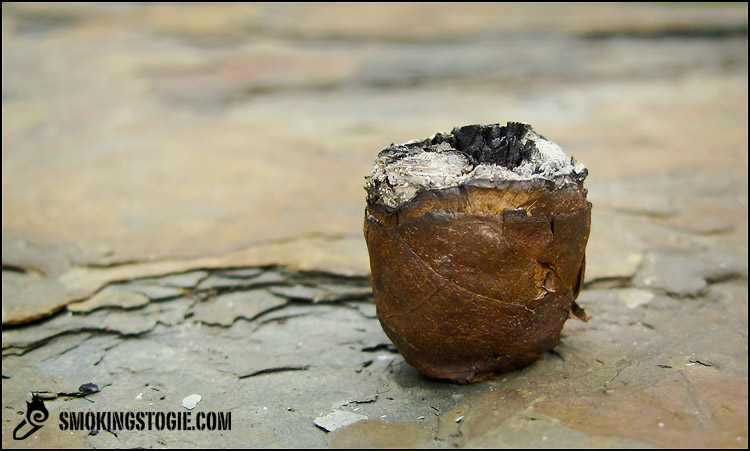 Really, what can I say? This cigar was fabulous and it is everything you would want out of a cigar. The flavor, complexity, balance and construction were all top notch. The big question is, is it better than the 45th? And to me, the answer is maybe. I honestly thought the 46th was more flavorful and more complex then the 45th and the fact that it was a touch milder only made it better. It gave the flavors a chance to shine as opposed to being overpowered by the strength. These cigars have 10-year-old tobaccos in them, and that’s exactly what it tastes like. It has great aged qualities but at the same time tastes young and bold. It’s a great combination. If you have the money, I recommend trying one.