For the past few years, there has been a growing amount of speculation as to what Padrón would have in store for its 50th anniversary, which was celebrated in 2014. New versions of the Padrón Family Reserve, which had become the company’s headlining release at the annual IPCPR Convention & Trade Show, were absent from the 2012 and 2013 shows, and while there was no shortage of traffic and a few new products, it was clear that the focus was on celebrating the company’s 50th anniversary, occurring in 2014.

It has been a long and interesting journey for the company, founded in 1964 by José Orlando Padrón after leaving Cuba and settling in Miami. The story is best told by José Padrón himself, and is featured on the company’s website:

In 1962, I arrived in Miami, an unknown city in a foreign land. I had to start from zero. At first, I received $60 monthly, as government aid given to Cuban refugees. I was thirty-six years old, strong, and in good health. Every time I cashed that check, I felt like a burden on the country that had taken me in. For many days, I looked for a job and did not find one. Every night, I went home and thought of the future. I was determined to do something so that I could support my family.

One day Raul Fernandez, a friend who worked in the Cuban Refugee Office asked if I had any carpentry skills. I said I did. He gave me a gift—a small hammer—which he asked me to put to good use. The hammer made me feel I had the necessary tool to become self-sufficient and not depend on a government hand-out. During the days, I worked as a gardener. At nights, I did carpentry with the hammer.

My dream was to save enough money to open a factory to make great cigars, like the ones we used to smoke in Cuba. Through a lot of sacrifice and hard work, I managed to save $600—money I made working with the hammer. With that, I made my dreams come true and opened Padrón Cigars in 1964.

I still have the hammer as a reminder of how it all started. More than forty years later…The hammer is still here and so is Padrón Cigars, the brand the hammer helped build.

Along the way, Padrón went from making small cafeteria cigars to opening Tabacos Cubanica in Nicaragua in 1970, which was burned down during a civil war on May 24, 1978. That October, José Padrón went to Cuba to meet with Fidel Castro in hopes of getting political prisoners released; as a result his Miami offices were bombed. In 1979 the company moved operations to Honduras after the Sandinistas take power in Nicaragua and interrupt the company’s operations. That same year another bomb is planted at the company’s Miami headquarters and destroys the north side of the building, while the company moved production back to Nicaragua.

The 1980s were kicked off with another bombing and graffiti scrawled on the company’s Miami headquarters, with another bomb detonated in 1983. The company endured the U.S. embargo against Nicaragua from 1985-1990, forcing production back to Honduras.

It wasn’t until 1994 that the company released its first high-priced premium cigar, the 1964 Anniversary Series, a line still highly regarded and available in humidors around the world. The 1926 Series launched in July 2002 in celebration of José Padron’s 75th birthday, followed up by the company’s 40th anniversary cigar released in 2006 and the 1926 Serie 80th Anniversary in 2007. That same year, the Padrón Family Reserve debuted with the No. 44, a line that has since grown to five release with the No. 45, No. 46, No. 85 and this year’s No. 50.

But while the Padrón Family Reserve No. 50 would have been the headlining cigar in other years, it was overshadowed by another cigar, and if you’ve seen the pictures, it’s for good reason. 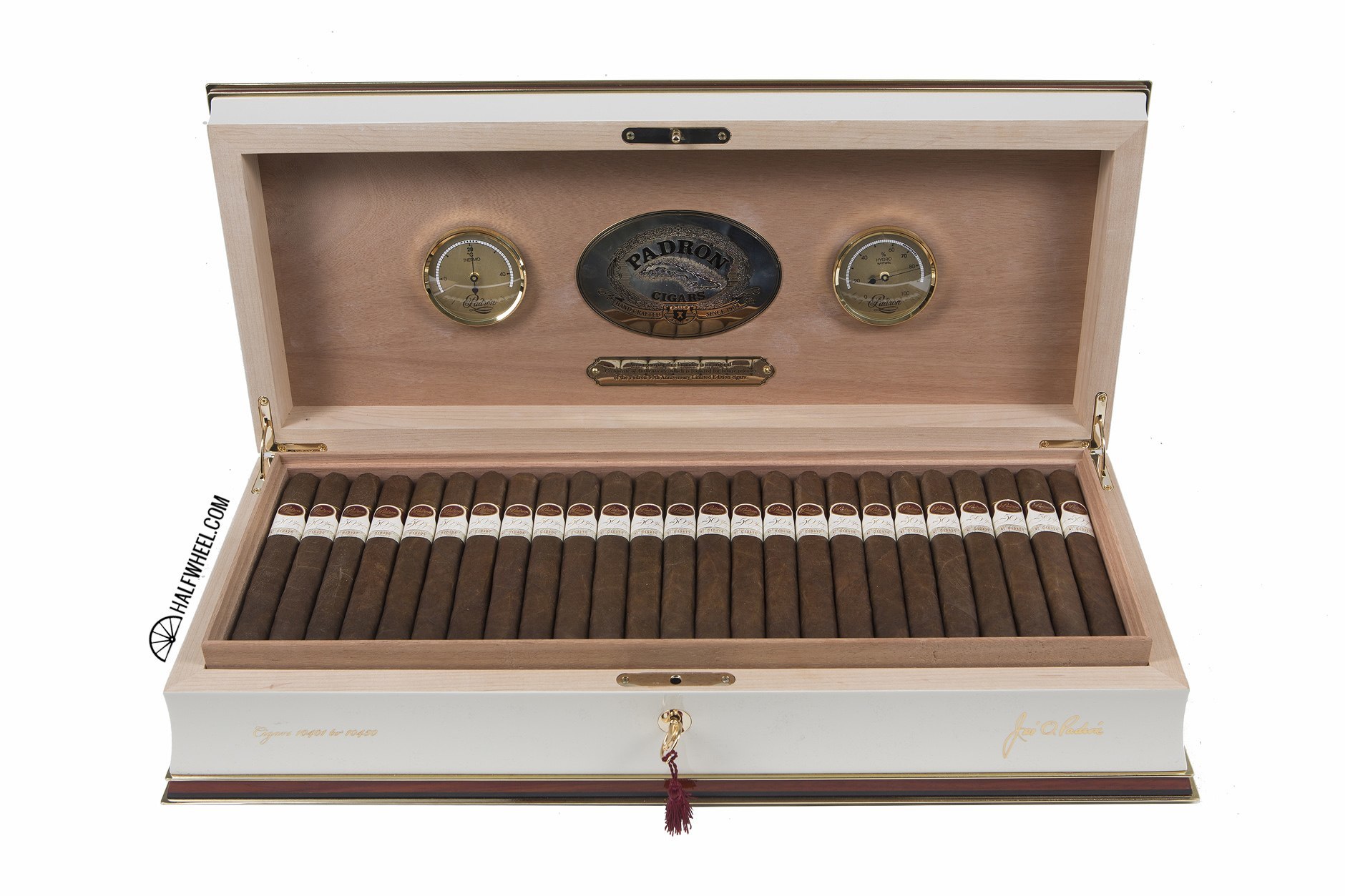 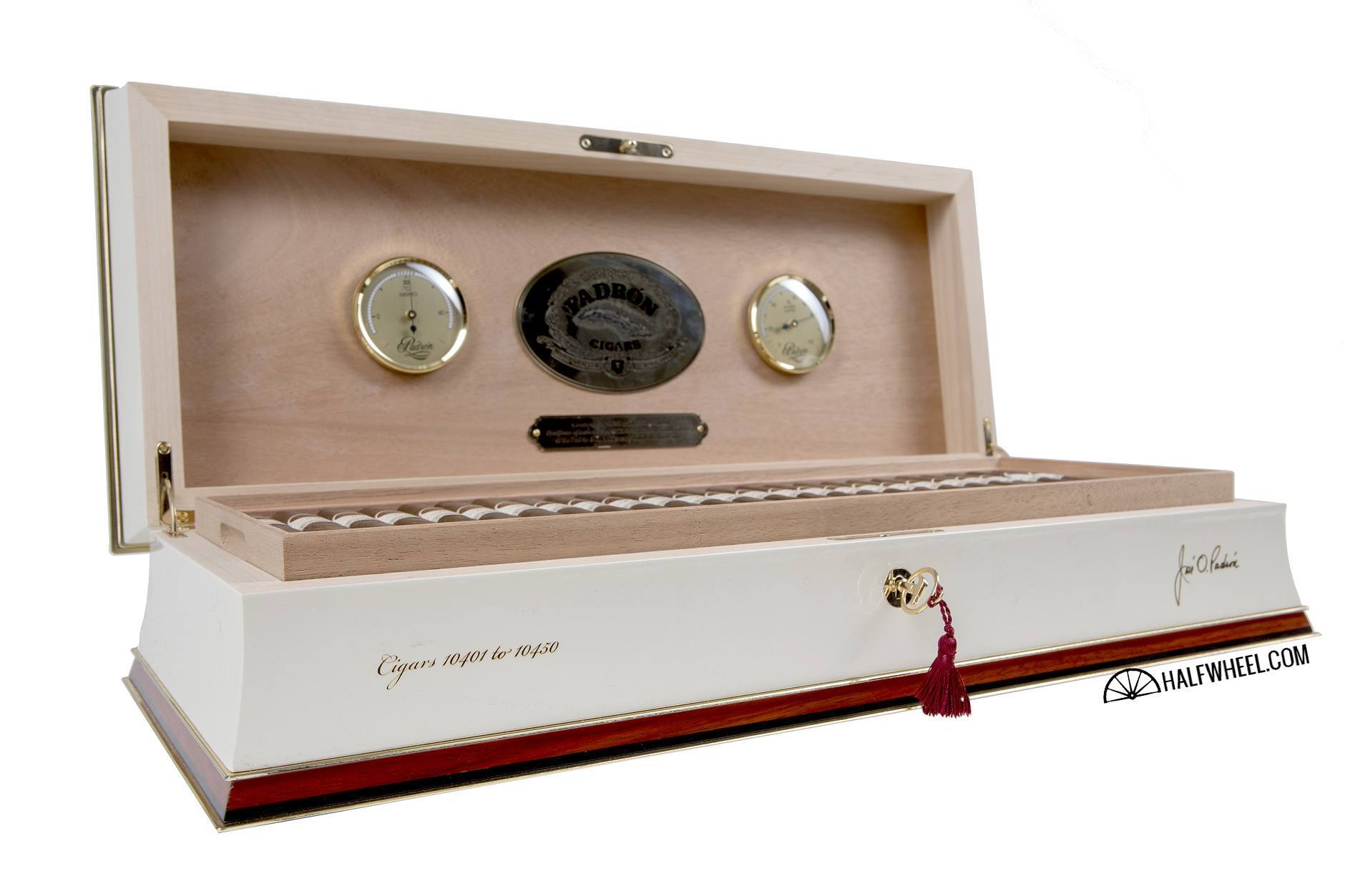 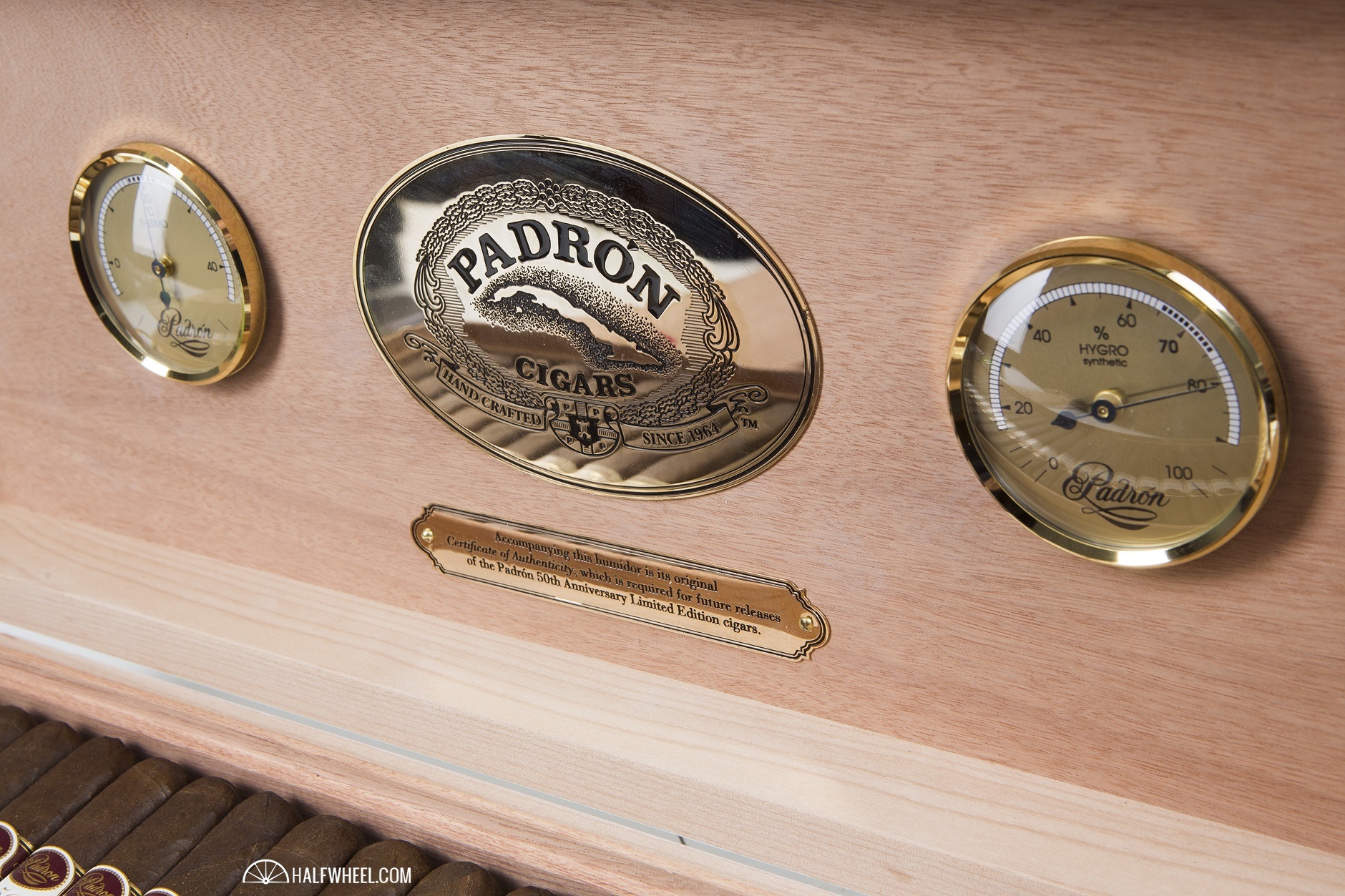 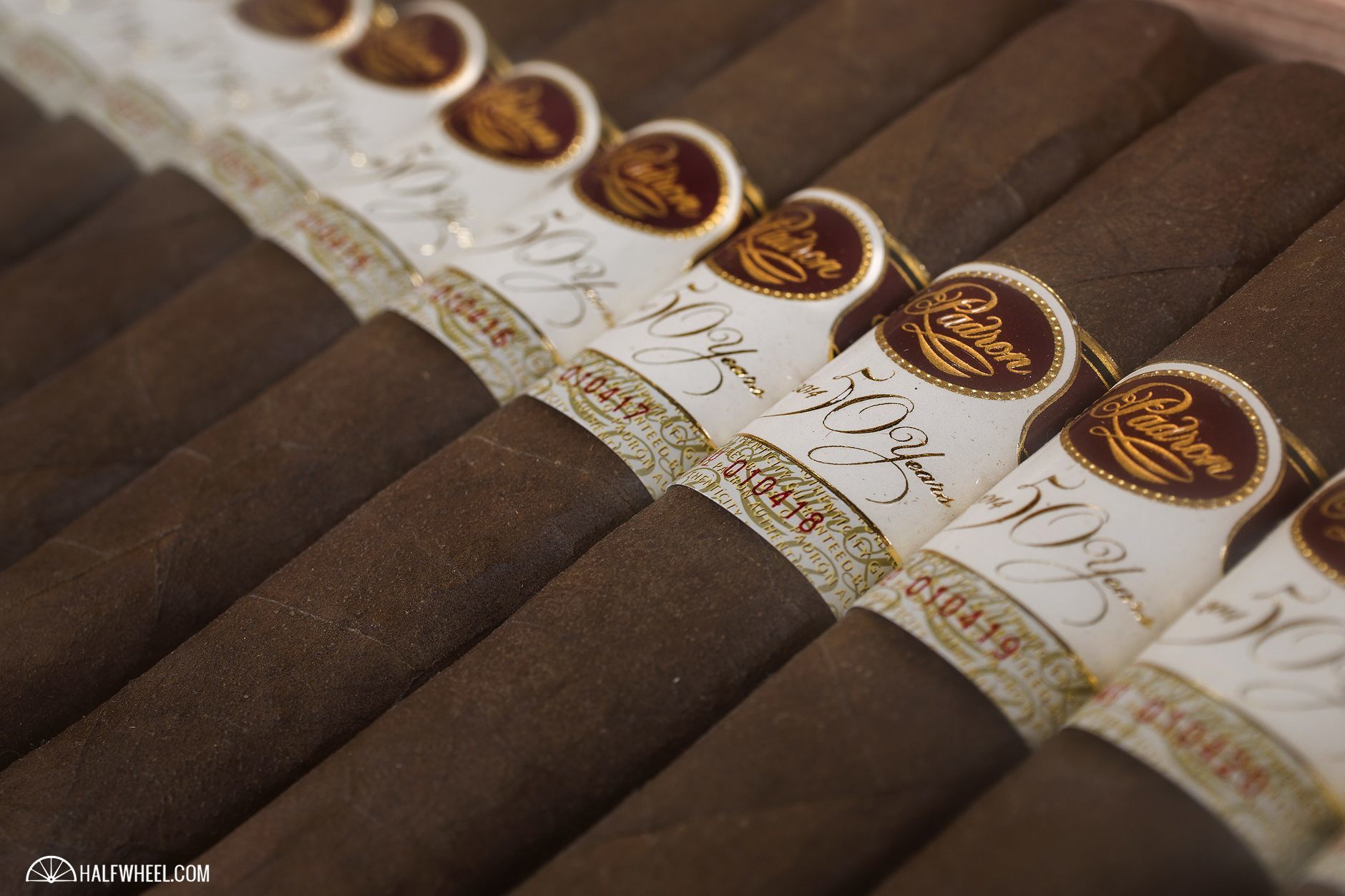 The Padrón 50th Anniversary Limited Edition was one of the most talked about releases at the trade show: a release of just 1,000 humidors, each containing 50 cigars and both are incredibly gorgeous, with the former designed by the noted designer Nelson Alfonso and made by Golden Age. In addition, a limited edition lighter and ashtray were designed and produced by S.T. Dupont. As is fitting given the roots of the company, the hammer design is prominently featured throughout the release, as well as within the name of the cigar.

Each humidor and cigar is individually numbered, so much so that each humidor indicates which cigars are inside. But as I wrote about in my coverage of the Padrón booth at the 2014 IPCPR Convention & Trade Show, a few of the humidors are being held onto by the company, including #8, since the company was founded on Sept. 8, 1964. A full list of the reserved humidors has not been released by the company.

The first 150 humidors began shipping on Dec. 23, 2014, with the remainder to begin shipping early in 2015. While almost every humidor shipped so far has been maduro, there have been a few naturals according to Padrón.

Purchasers of the humidor are also getting a special treat, as they will be able to refill their humidor up to five times. The company has set up a special website for owners to register their humidor and when another batch is produced, those individuals will be notified and they will be able to purchase 50 more cigars through the store which the original humidor was purchased. In addition, rights to those cigars are transferable should someone sell their humidor or otherwise need to transfer it. The company has not yet announced when the first batch of refills will be available, nor what they will cost or what the expected release schedule is. 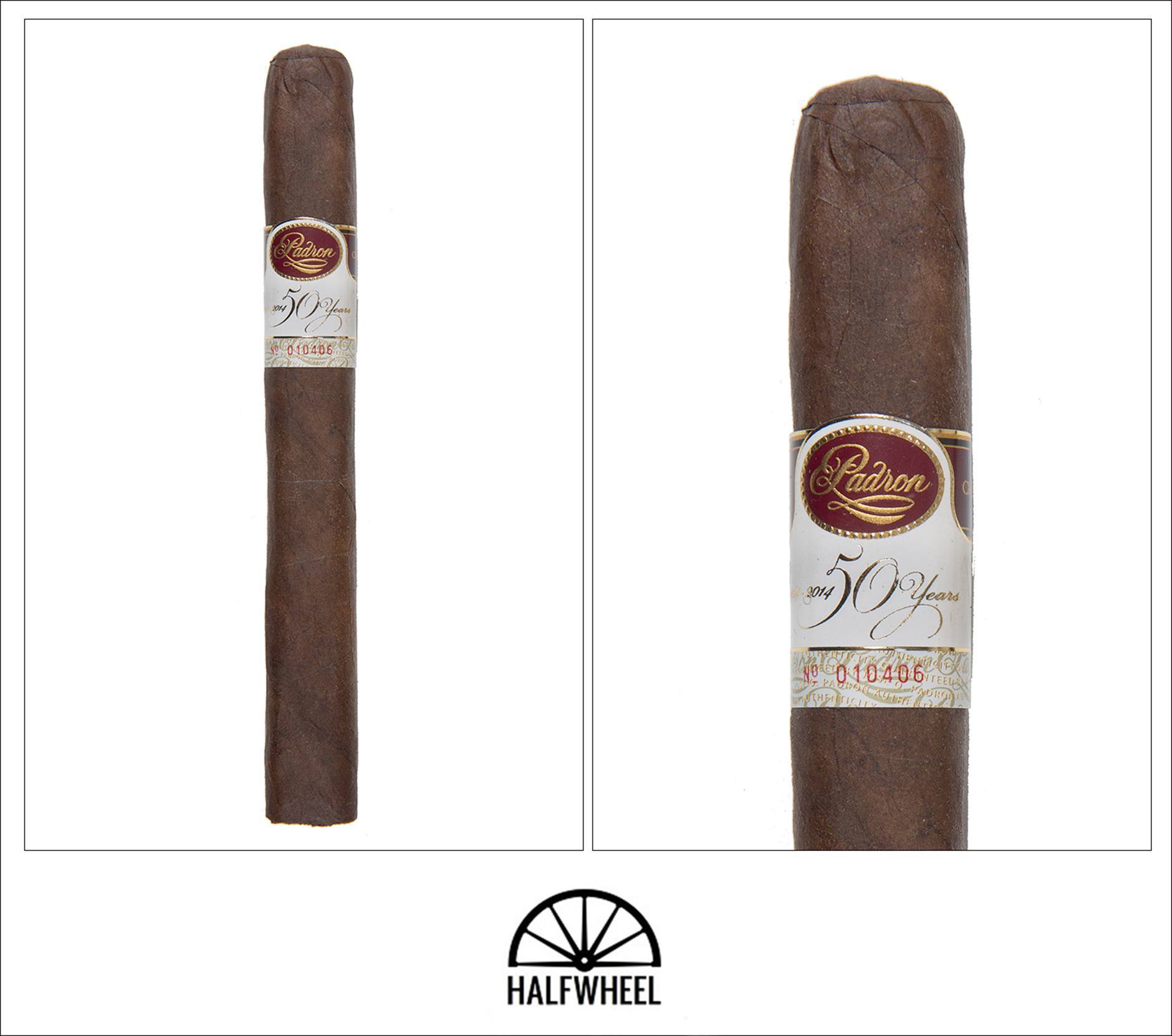 Other than knowing what the cigar is by its unique band, I find myself hard-pressed to say that I would be particularly impressed by it were it not for that piece of paper. There’s nothing particularly distinctive about the vitola that gives away what it is, and in many regards is an average-sized cigar in the current market. That said, it’s a good looking cigar with a very even cocoa coloring and small, flat veins and a bit of tooth. The box-press is executed well as the cigar feels firm from all sides. The seams are about as flat and unnoticeable as I can recall seeing on any cigar and at times I swear they aren’t there at all. If anything, the slightly uneven cap is the only visual knock on this cigar. The pre-light aroma is light and sweet with a cocoa note standing out in one sample and a buttery cream in the other; the cold draw is also light and sweet but with a touch of cream, reminiscent of chocolate milk but without the heaviness of syrup, with air moving effortlessly.

The first few puffs of the Padrón 50th Anniversary Maduro are about as welcoming as you can ask for, offering subtle notes of chocolate syrup and wood before quickly delivering a celebratory explosion of pepper both in the nose and on the palate. The two come together and become partners in the flavor development, with the pepper more pronounced and the chocolate setting the undertone. There are touches of earth and wood that also come out, particularly in one cigar smoked for this review, lending a bit of a drying sensation. The cigar continues to put off a steady stream of smoke even while at rest, filling the surrounding air with the aroma. The ash holds on for about an inch before a gentle tap sets it free and which helps the smoke production return to its more than sufficient levels. The draw is literally effortless, and that doesn’t mean it’s loose—far from it in fact. But there is literally nothing to think about when it comes to puffing on this cigar as the air moves gracefully through it. The burn line has been sharp and other than the ash curving a bit and breaking off just shy of an inch long, there’s nothing to complain about so far. The ash on the second cigar starts to flower pretty profusely as it heads into its second third while delivering heaps of clean, potent pepper along with touches of dry earth, all well-balanced and with an enjoyable finish. 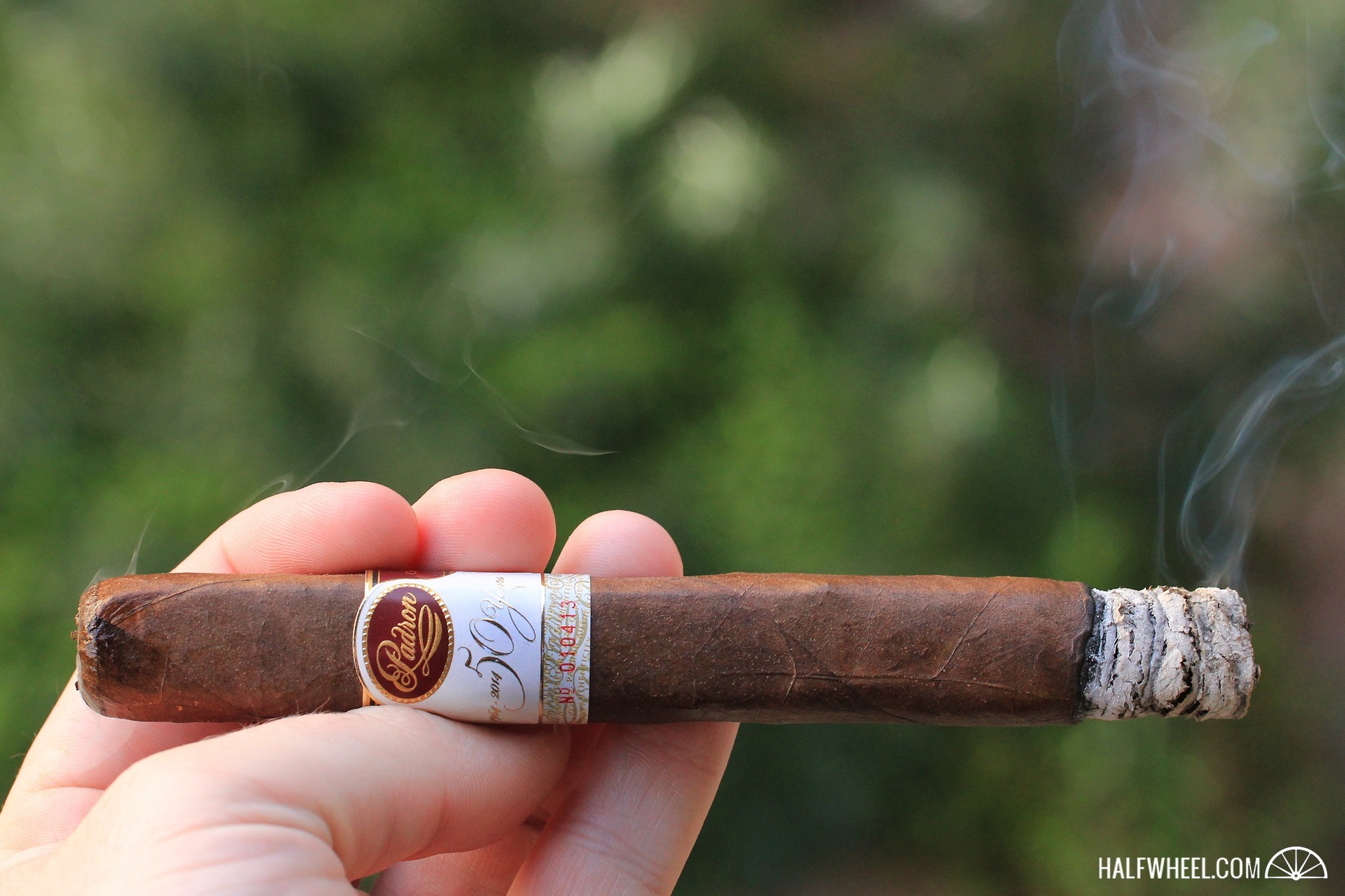 The pepper becomes a bit more pronounced at the start of the second third but certainly doesn’t overpower the palate or nose. The sweetness has faded a bit, leaving a drier yet very palatable table pepper taste in the mouth, while the retrohale offers plenty with which to contend. Approaching the midpoint of The Limited Edition, the pepper dies down a good bit and the flavor mellows out to a subtle earthiness, with any trace of sweetness now a thing of the past. There are some subtle changes that first show up in the aroma past the midway point, as a sweet and tangy wood note wafts over from the ashtray and calls me back to the cigar, with the first couple of puffs showing signs of renewed vigor in the flavor. Earth becomes more prominent in the flavor, dry and almost hard at times but still very agreeable; the flavor turns rustic and robust quickly that gives the palate a decisive profile. The Hammer continues to burn flawlessly with no touch-ups or corrections needed. 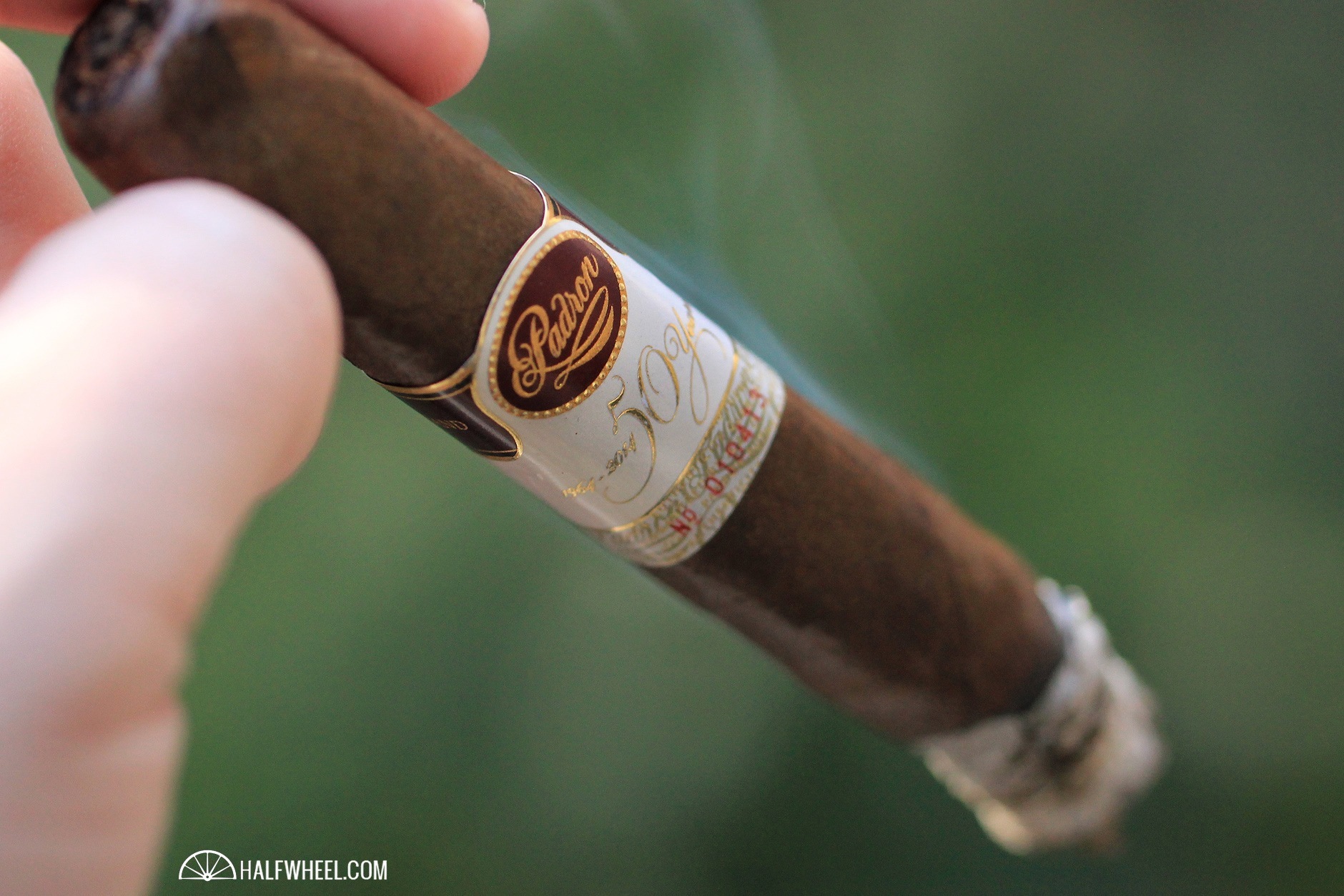 There’s little to cue the palate for the end of the second third and the start of the final third, as the flavor stays fairly steady and upfront, a bit of a challenge for palates that prefer a softer smoke but one that will certainly be appreciate by those looking for a solid, formidable taste. Pepper begins to come back to the forefront in the final third of the Padrón 50th Anniversary, giving the cigar back much of the horsepower it has showed in its first third while still staying perfectly balanced and leaving a very palatable lingering finish. The draw continues to be effortless, and while I’d love for the ash to hang on longer, it’s something I can certainly live with. An orange citrus and floral sweetness comes out in the aroma to close out the cigar, a fitting finalé for a fantastic cigar. 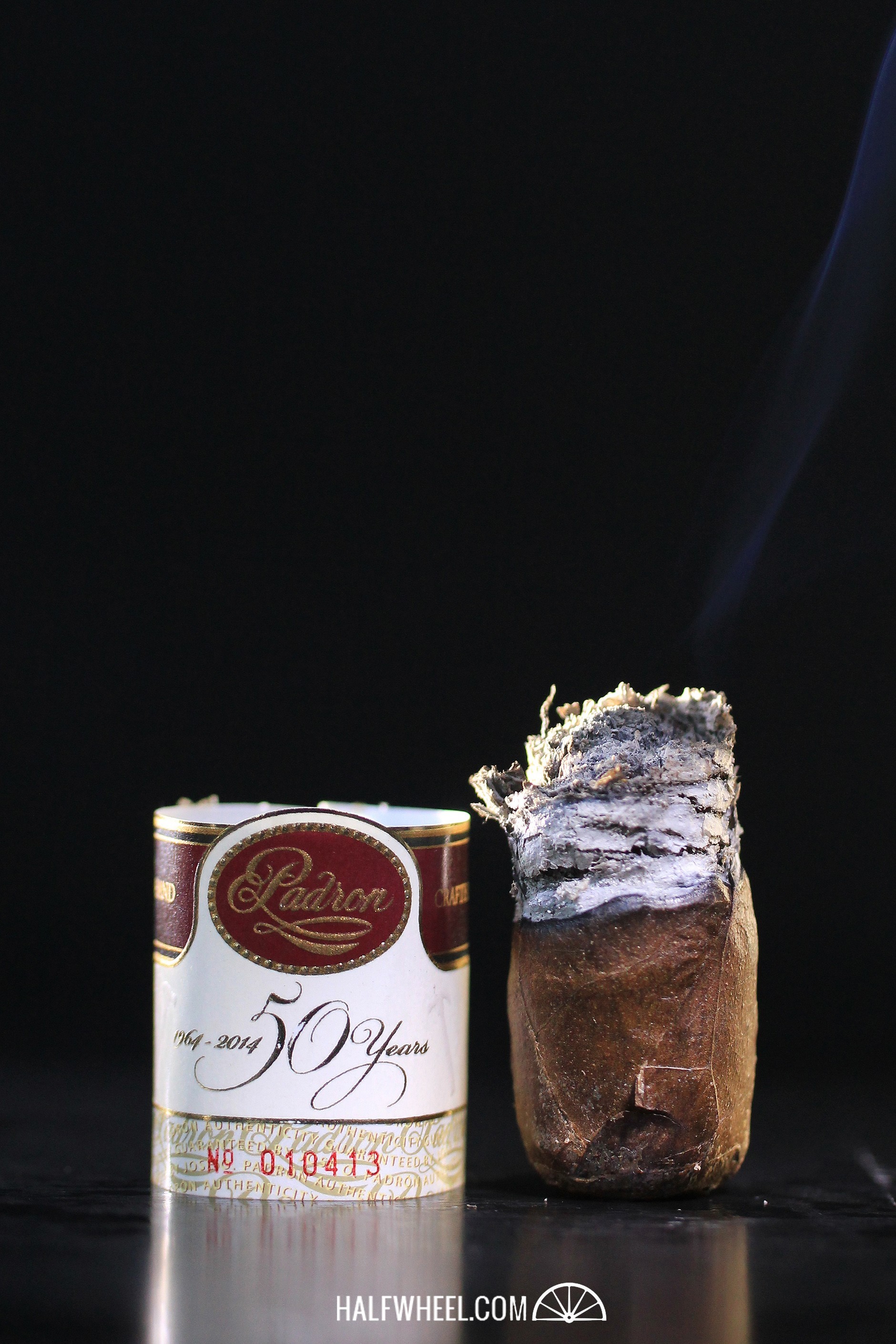 For cigars such as this that commemorate a major milestone in a company’s history and come with an ultra-premium price tag, the manufacturer really needs to hit it out of the park, and that is exactly what Padrón did with its 50th Anniversary “The Hammer” Maduro. While I will concede that the flavor may be too intense or rustic for some, cigars like this are about showing the absolute best that a company can produce and conveying the signature taste and style that 50 years has established. If you love Padróns, or simply want to smoke a fantastic cigar, you really owe it to yourself to track down at least one. I know I look forward to not only trying the natural version but savoring the two I have in my humidor as well as any others I can acquire.