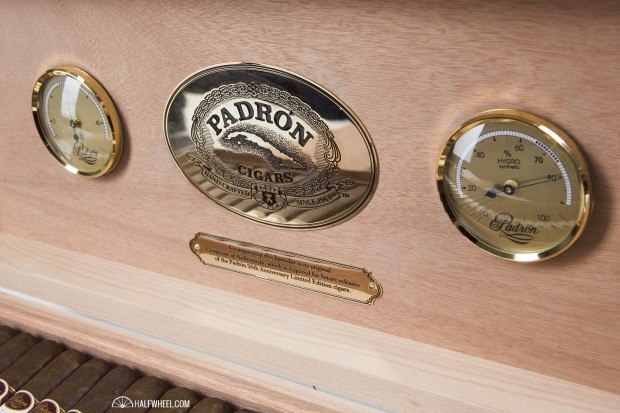 It’s hard to disagree with Patrick Lagreid’s and later Brooks Whittington’s assessments that among the hundreds of new products introduced at the 2014 IPCPR Convention & Trade Show, the Padrón 50th Anniversary Limited Edition was the cigar that stood out in terms of anticipation, excitement and buzz.

Only, it’s likely the case that the cigar was the last reason the product generated the attention it did.

Virtually no one got to try the cigars themselves, instead, people looked at a big white humidor filled with 50 of the to-be-released anniversary cigars. The details you likely know at this point: 1,000 individually-numbered humidors of 50 cigars in either Maduro or Natural wrappers. Those who purchase the cigars are able to have access to refill the humidors for the next five years. Together, the package will set you back $5,300 plus the cost of the refill cigars, meaning the humidor itself is around $3,000. It comes packed in a gigantic red box that is about the nicest piece of cardboard I’ve ever seen. While the humidor measures 23 inches wide, 1o inches deep and 5 1/2 inches tall, the box is even more substantial. Red felt lines the inside, which means that you’ll likely need to dust off the humidor once unpacked. Inside is the humidor, the cigars, a certificate entitling you to the refill program, a key, two 69 percent Boveda packs, two Padrón-branded Boveda wood holders, a letter from Boveda and the tray with lid. The box itself is designed by Nelson Alfonso of Golden Age (Golden Age Ltd./Golden Age Visual Developers/GAVD), the man behind the Atabey and Byron brands and a longtime designer for Habanos S.A. who helped to create the Cohiba BHK, the Montecristo Gran Reserva and the new Vegueros among others. A small emblem on the front lip credits Alfonso and indicates the unit was made in Spain. While the unit opens, closes and locks like a traditional humidor, how the cigars are stored and humidified is a bit different.

There’s a ventilated tray that runs the length of the humidor that is covered by a lid and sits elevated via wooden notches from a false bottom. The tray itself can be completely removed and it leads me to believe that if you had a butler and some guests over, you would present them the cigars by having the butler retrieve the cigars, bring the entire tray over to you, remove the lid and wait for you to select the cigars—because it seems entirely ideal for that and just about nothing else. Below the tray are four small magnets for the Boveda holders to be attached. It’s an ingenious system, one that I imagine will see Boveda use on a lot more applications in the future. There’s nothing wrong with the look of Boveda packets, although, it doesn’t fit in well with the look of this unit, even in the custom-branded holders.

There’s no point trying to describe how it looks, it’s stunning and words aren’t going to do it justice. It’s substantial and elegant, truly embodying Padrón. As a design piece, it’s a home run. The small details were understood: the key has a hammer in it, the hinges say “Padrón,” the letter from Boveda, the handles on the lid, I could go on and on. But as a humidor, it’s not the greatest in the world.

It starts and ends with the seal, which isn’t very good. In an ideal world, the inner tray, which protrudes out from the bottom lip, would fit snug against the interior walls providing for a basic inner/outer seal. Unfortunately, because that tray needs to be removed, it’s not snug. It wiggles. What this means is that the unit’s seal is largely dependent on the weight of the lid and the smoothness of the top and bottom pieces. I don’t think, absent permanently fixing the tray, that this can ever be fixed. The tray will always need to be able to have some gap to be removed, that gap will always be the downfall of the seal.

I’ve had the unit for nearly three months and while it never gets to out of control, the ambient relatively humidity in the room has raised or lowered the humidity 2-3 percent in the unit with the Bovedas removed. When the Bovedas are inside, the change isn’t able to register as a full percent, which is acceptable to me, yet, still a problem with the humidor unit itself. If this was 1992 and Padrón was forced to use floral foam, this would be a serious problem, but because the Bovedas are able to remove or add humidity to stabilize an environment, it works.

I’m a bit torn as to how to answer the does it work? The unit was clearly designed to be used with Bovedas, which are included, and when the Bovedas are there, the box functions as a humidor is supposed to. That being said, the seal—the most important part of a humidor—is still flawed. And I really do think this is a case where the Bovedas save the humidor from a function standpoint. That all being said—overall, it works. After speaking with over a dozen retailers who have (had) the Padrón humidors in stock, I’ve yet to find a single person that has a working Padrón-branded hygrometer. Our hygrometer is reading about nine percent high and the thermometer is in celsius and seems stuck at 20. I don’t think either is supposed to be removable, but I was able to get the thermometer to wiggle out, the hygrometer doesn’t seem to want to move, which is a shame, because I could presumably then calibrate it. From an aesthetic standpoint, I understand why both gauges are there, but a non-working hygrometer and a celsius thermometer is going to be useless to many of the American customers for Padrón.

Our unit was acquired empty, meaning it’s been used to store other cigars. Because of the somewhat heavy box-press on the Padrón 50ths, trying to get two rows of cigars in the tray is actually pretty challenging for anything over about a 48 ring gauge, that being said, you can actually fit cigars as large as 54 comfortably in the bottom area, which means the realistic storage capacity is about 60 cigars of various sizes. Reviews like this are one of the main reasons we started halfwheel. How does the Fuente Fuente OpusX Football burn? How long does it take to smoke a CroMagnon Femur? What does a 70-year-old cigar taste like? So for those wondering, how well does the Padrón humidor work as a humidor? It works, somewhat in spite of itself.

On one hand, it’s a box used to present cigars, not a unit sold separately to store cigars. But it is most certainly marketed and described as “the Padrón humidor” and on that level, it’s form over function. The saving grace is active humidification, which helps to compensate for the humidity that inevitably leaks in and out of the unit, but it—much like the hygrometer—represents an annoying defect in a product from a company with a reputation as good as any and one with a massive price tag. If you were offered an empty unit for around $3,000 I wouldn’t recommend buying one—particularly if you didn’t intend on storing Padrón 50th Limited Edition cigars in it—there are far better options at that price point. That being said, I’m going to keep using this one and marvel at its beauty.

Site sponsor Serious Cigars still has the Padrón 50th Anniversary Humidor in stock. Thanks to site sponsor Elite Cigar Cafe for not disqualifying us from the raffle, which is how we acquired this unit.