In terms of rounding out its catalog, Padrón has been checking off a lot of to-dos in recent years.

A milder, Connecticut-wrapped cigar? Check, by way of the Padrón Dámaso. 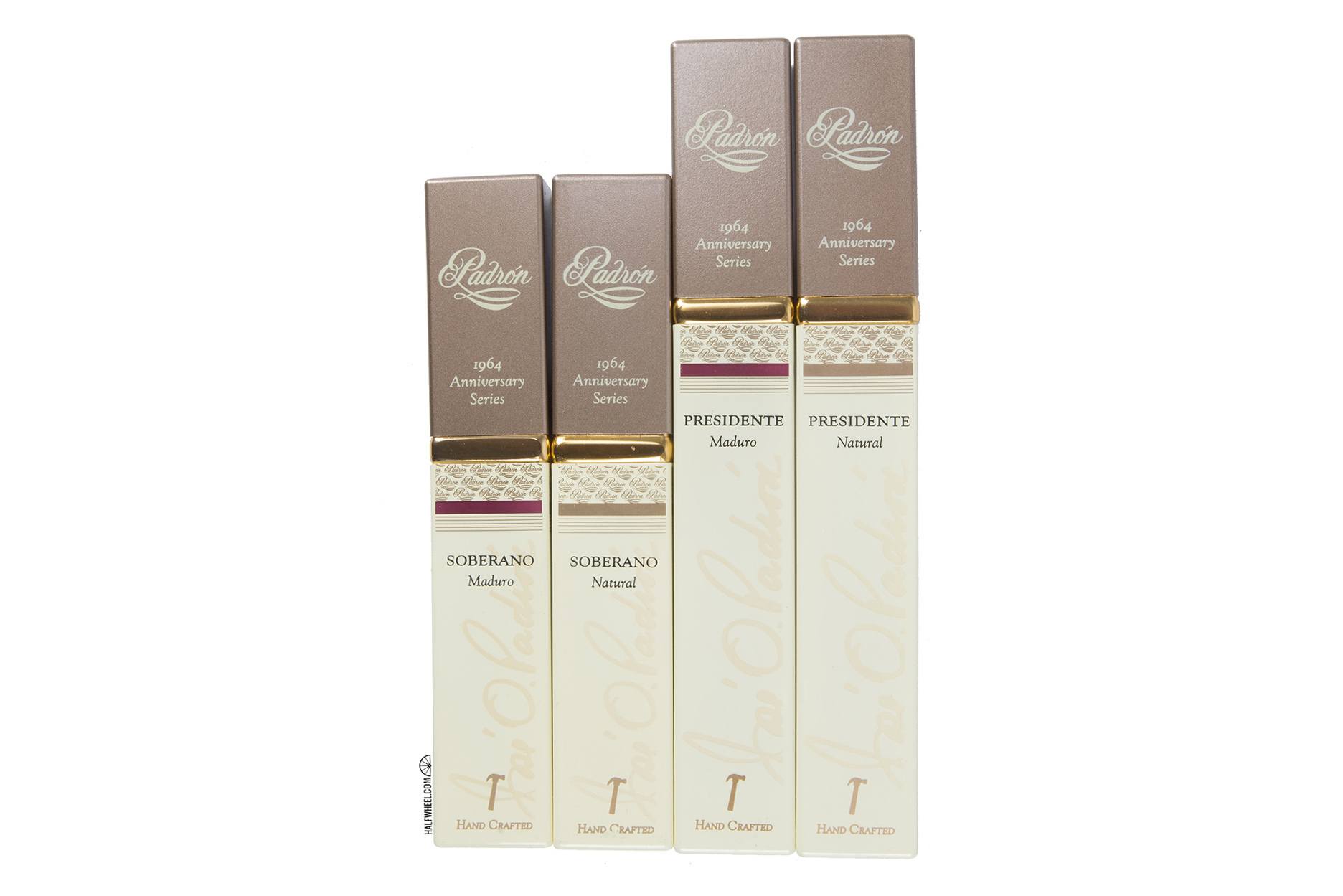 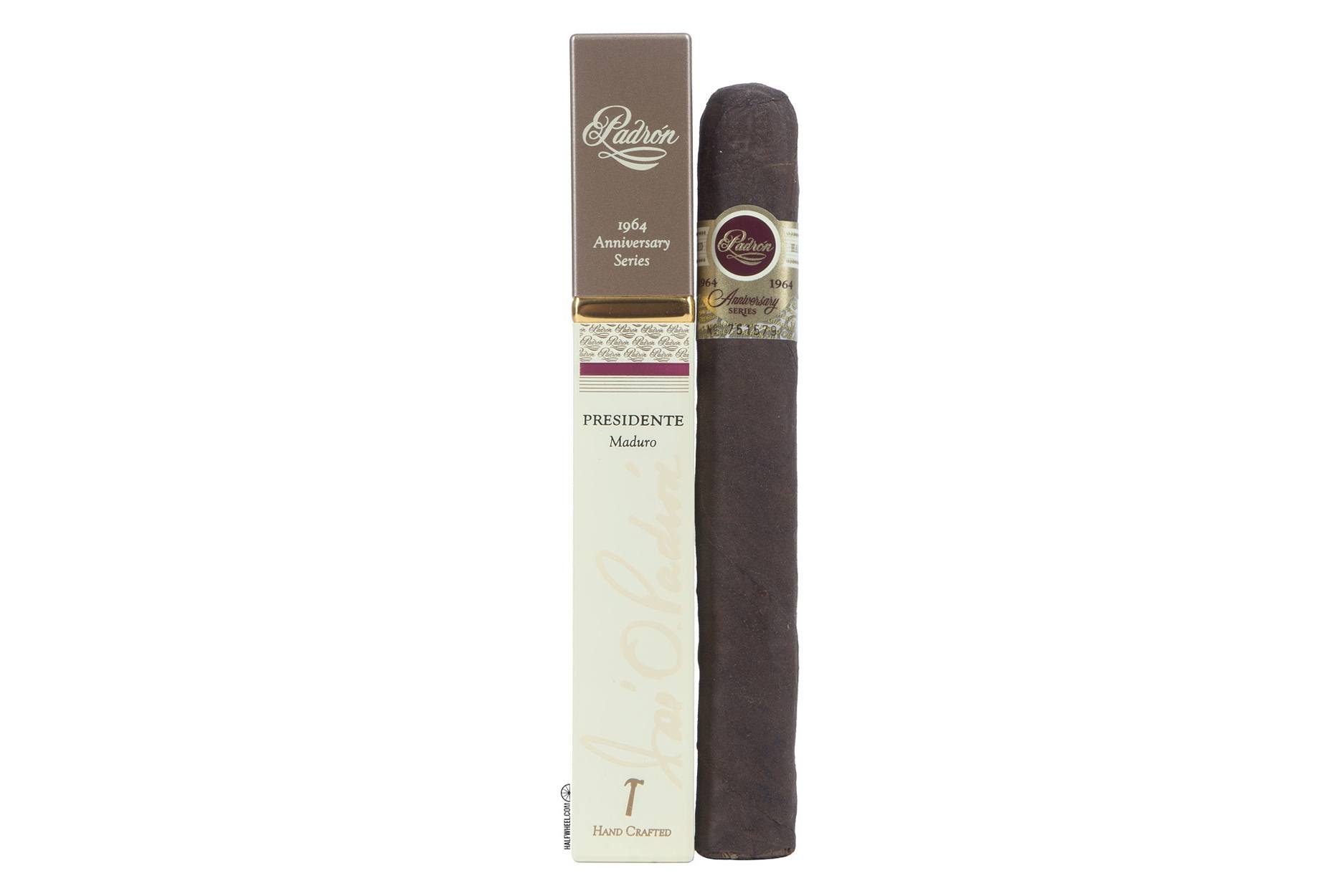 “We felt it was important to have something in tubes in the Anniversary line,” Jorge Padrón told halfwheel when the cigars were formally announced. He added that the tubed format has done well in both duty free stores and among customers who take their cigars with them to golf courses and other locations and prefer that they be protected.

With the 1964 Anniversary Series being a box-pressed range, Padrón decided to make the tubes square, something that has been seen on an increasing basis as of late and leading some to question whether these merit the description of being tubos or if their shape warrants a different word.

The new tubos got a limited release last summer before heading to members of the Tobacconists’ Association of America in April, a group of about 80 prominent retailers across the country. The cigars will be offered to all other Padrón accounts at the upcoming 2017 IPCPR Convention & Trade Show in July.

This new Presidente vitola will instantly look familiar thanks to its dark and very toothy wrapper leaf that can offer an impressive level of texture. The roll is slightly bumpy on one sample but otherwise it’s generally quite clean. There is a bit of give, not surprising for this box-pressed vitola, and the more examples that you have smoked, the more it will be recognizable. The pre-light aroma is incredibly rich with chocolate syrup; put a glass of Hershey’s syrup in front of me and I might have a hard time telling the difference. Complementary notes manifest more chocolate, with one sample offering rocky road ice cream and another cool fudge. While I don’t get much pepper from the foot save for one sample, I certainly get the sensation of it, as each sniff leaves a pleasing tingle in my nostrils. The cold draw is a touch tight but not worrisome and shows more of the chocolate note, albeit more subdued and leaning towards a Hershey’s Kiss or bar. This doesn’t show much pepper either, and doesn’t leave any sort of tingle in its wake.

Having smoked a few other sizes of the Padrón 1964 Anniversary Series before, the first puffs of the Presidente Maduro are familiar if a touch mellower than I recall. It’s the first retrohale that snaps the cigar firmly in place in my memory, as it is fairly peppery and seems to awaken pepper on the tongue as well. The first clump of ash detaches rather quickly on its own, even before I would have thought it long enough to merit a photo, but with its departure comes more flavor and complexity as the cigar mixes both a thick chocolate brownie note with rocky earth and pepper. 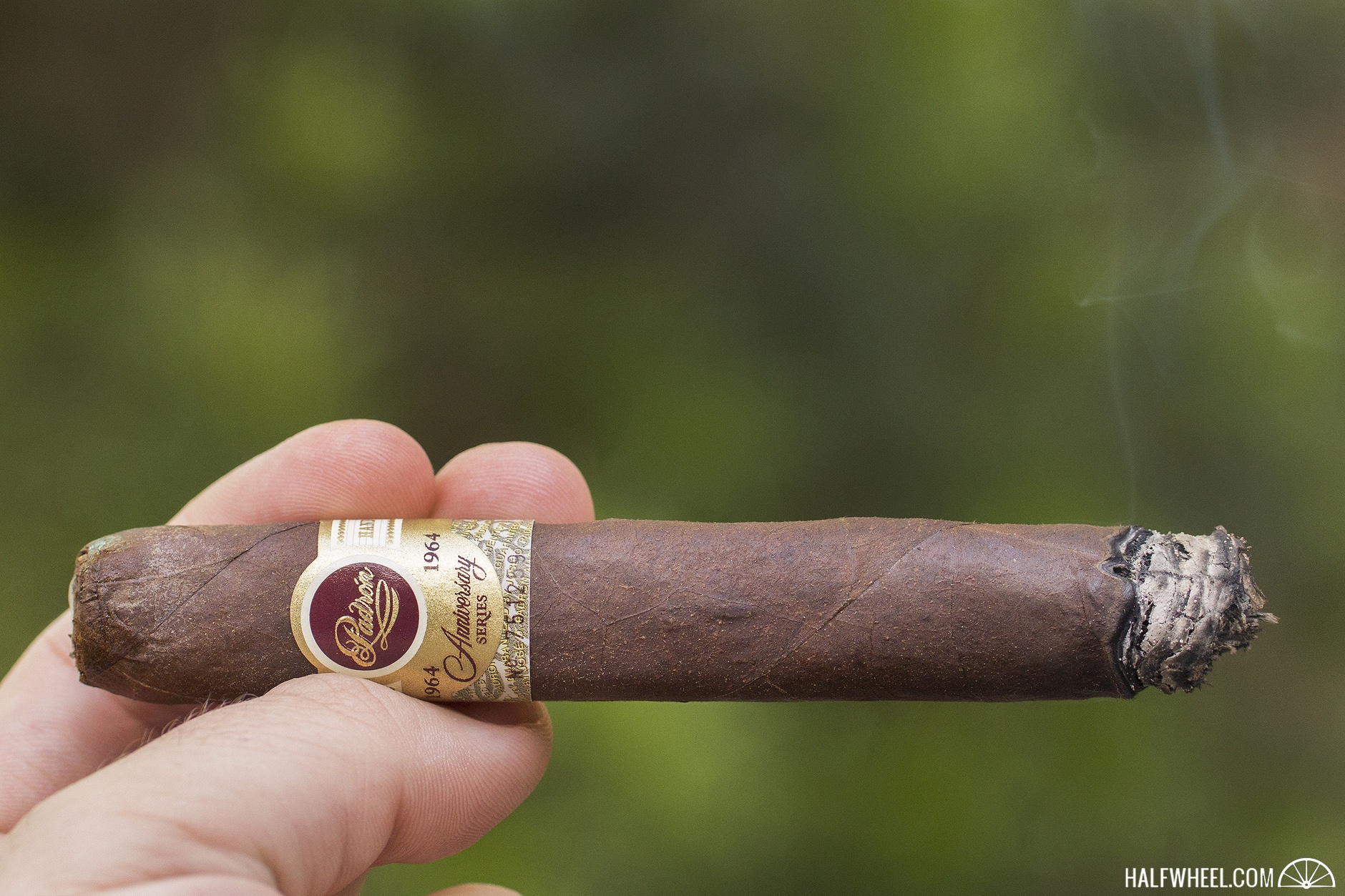 By the start of the second third it is clear that retrohales are an integral part of getting everything out of the Presidente, as the add a unique and vital spin on the pepper, each one reawakening the palate as well. The chocolate note that was so prevalent during the first third steadily falls away during the first half of the second third, though fortunately reappears right around the midpoint. Core notes of rich Nicaraguan earth take over in its absence, but the cigar isn’t unbearably strong, at least for my palate, save for one sample where the lingering finish was just a bit harsher than I’d like. As mentioned above, if you want to keep things a bit milder, simply don’t retrohale. 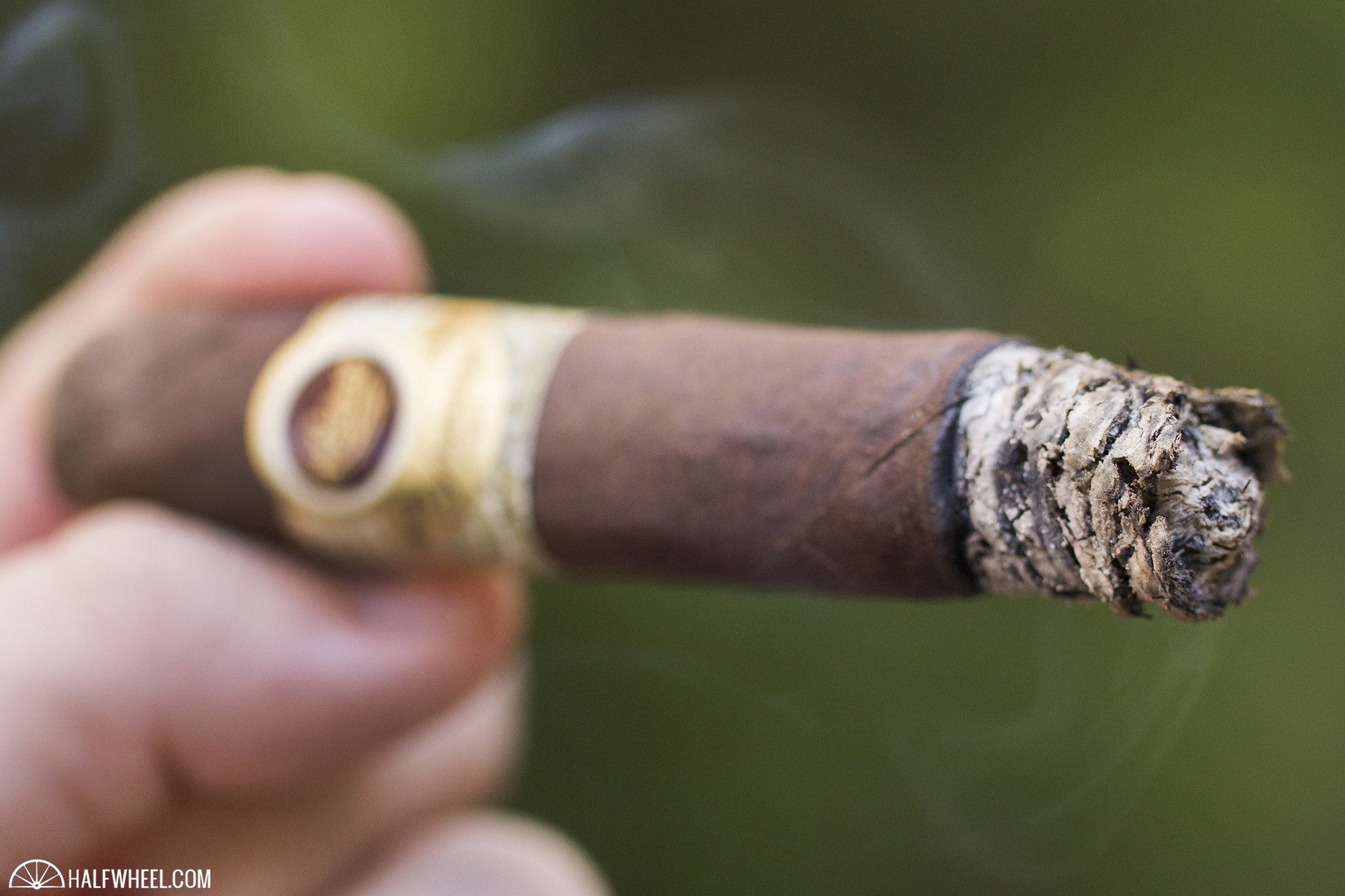 Even without retrohales, the Padrón 1964 Anniversary Series Presidente Maduro is now in high gear, as the pepper is much more prevalent on the tongue, while the sweetness moves more towards the nose via retrohales and the resin aroma. While it may not be the most complex profile, it certainly is engaging and true to its tobacco, medium-full to full in flavor and body with both the core earth note and top pepper notes getting equal opportunities to shine and lead the profile. In the final two inches, the cigar begins to get a bit out-of-balance and rough, but a slower toking pace minimizes that and allows it to be taken down to a tiny nub. 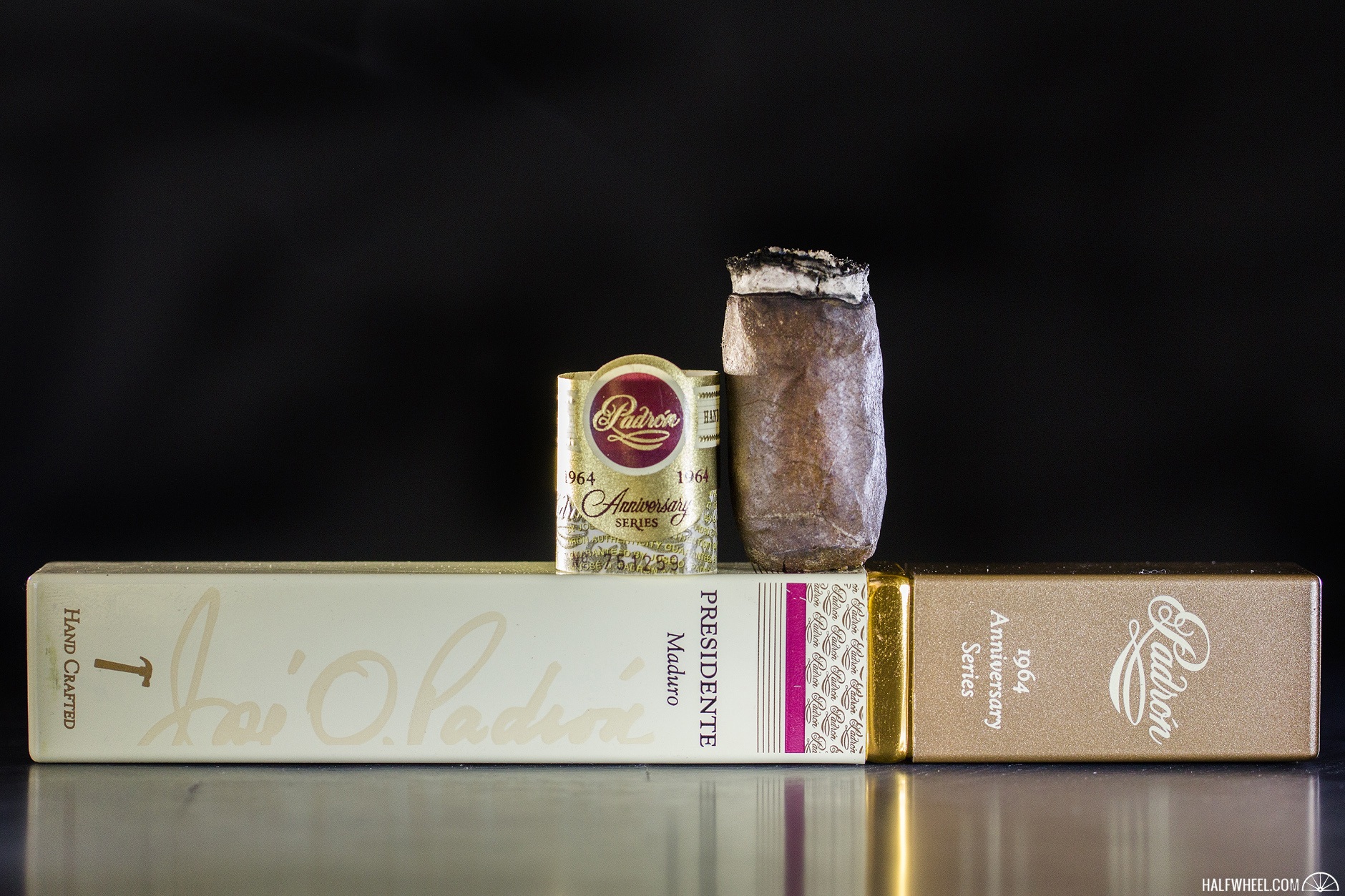 When I was first getting into cigar smoking, I often wondered if there was any inherent difference between tubed and non-tubed cigars, and for the most part, I’ve come to the conclusion that there really isn’t. Some may have cedar linings and that can impart a bit of flavor, but for the most part—at least as I have experienced it—tubed versions of cigars aren’t that much different from their non-tubed counterparts. Which leads to the question of whether the cigar inside is good on its own merit, and in the case of the Padrón 1964 Anniversary Series Presidente Maduro, I’d say the answer is yes. If you’ve smoked other cigars in the line, you’ll be immediately familiar with the profile, and this new toro vitola offers a good size to the line that makes for an enjoyable two hours of cigar enjoyment.