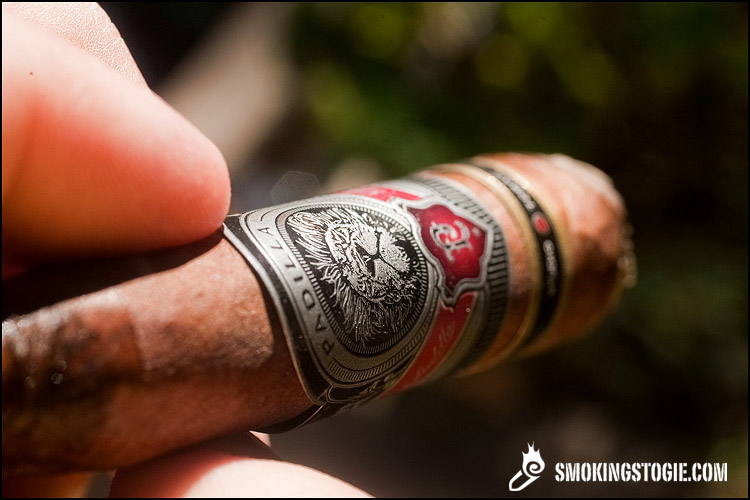 In March of 2011, the (Oliva) StudioTobac Executive Board approved a request from Padilla Cigars to produce a Limited Edition full-bodied, Nicaraguan cigar that Padilla would distribute. This is the first (of presumably many) collaborations that the Studio Tobac team will produce.

“Even though we’ve existed for the last few years, Studio Tobac just became know to the public; so we’re very protective of the brand. This type of joint venture isn’t something we take lightly, and we’re not getting in the business of making private label cigars for anyone. Working with Ernie (Padilla) makes sense because he has been a friend of Studio Tobac for years. Ernie assured us that he will treat this project with integrity and respect. We’ve got some interesting ideas for the blend. I’m sure Padilla does, too. I’m excited to smoke the cigars. They should be pretty damn good.”

The Studio Tobac project (basically, it is a “brand within a brand,” part of Oliva Cigars) has been knocking it out of the park lately. Their Cain F Lancero is generally considered to be one of the best releases of last year and is being released as a regular production later in 2011. Also just recently, the Cain Daytona Lancero prototype was announced as the winner of the Cigar Journal’s 2011 Nicaraguan Cigar of the Year in Vegas, despite the fact that there were only about 375 of them in existence at the time.

The Padilla/Studio Tobac Figurado is made with all Nicaraguan filler and an Ecuadorian Habano wrapper, and was blended with input from Eresto Padilla (and a few others at Padilla Cigars) and the Studio Tobac Advisory Board. There is a strict limit of 1,000 boxes of 10 cigars each (10,000 total cigars) that will be released of this cigar, and they should be in stores around the end of August, with a price tag of $14 each or $140 per box.

Here are what the boxes will look like when they are released. (The cigars come in cello in the box, I took the cigars out of cello for the photos. — brooks.) 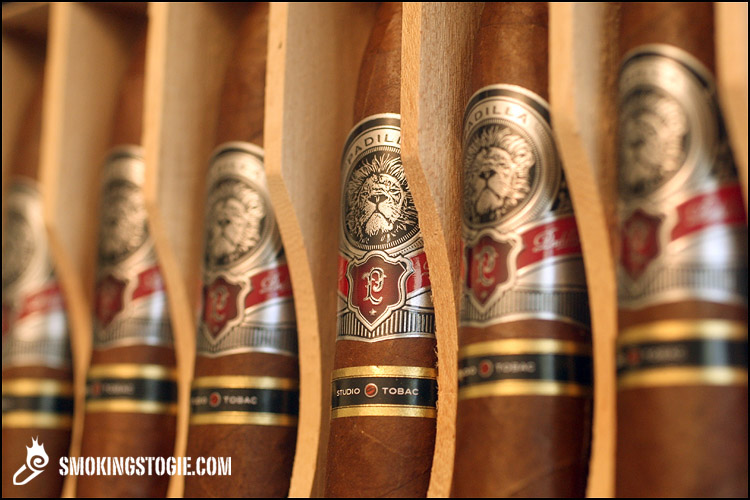 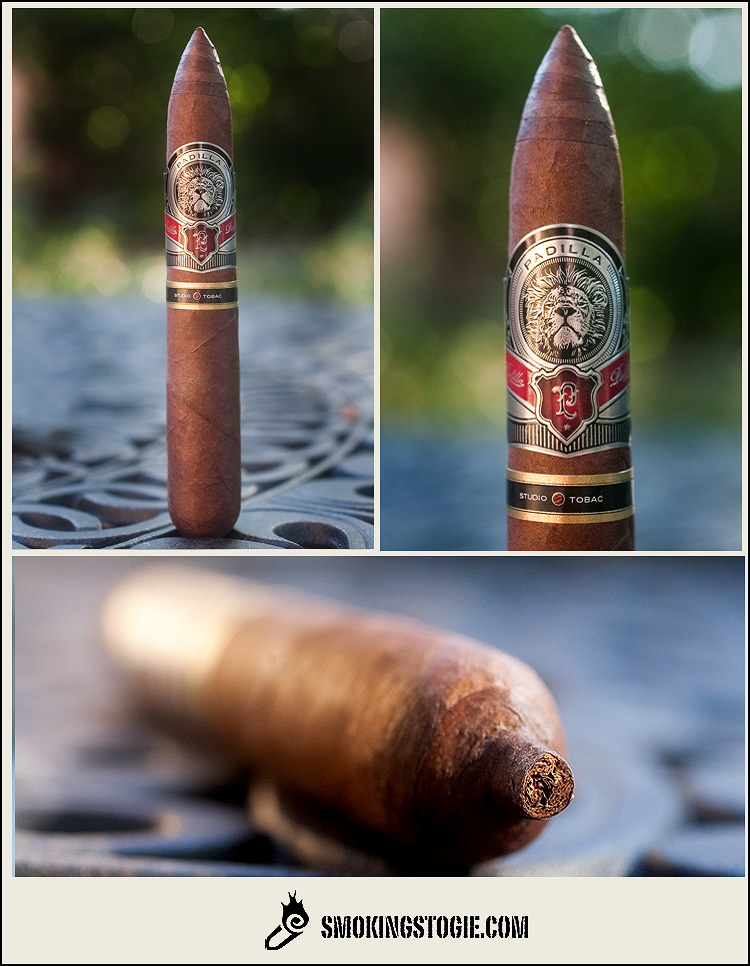 The cigar itself is a wonderful looking stick, with a reddish brown wrapper that is silky smooth to the touch. There are no major veins present, and the wrapper smells like a combination of barnyard, leather, wood and pepper. It has the perfect resistance when squeezed and feels pretty hefty when you hold it. Predraw notes include leather, sweet graham cracker and just at touch of pepper.

The First Third starts off with a bit of pepper on the tongue, along with notes of leather, coffee and cedar. There is a nice sweet tobacco flavor as well, a great compliment to the other notes. Almost no spice or pepper at this point even on the retrohale, it is a fairly mild start. 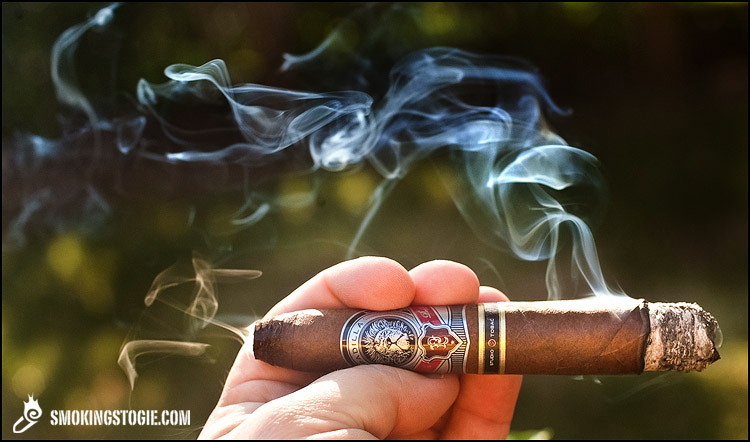 The Second Third strengthens a bit, but still has quite a bit of flavor with the same leather, coffee and wood as before, but it also adds a great distinct sweet nutty note that is wonderfully pleasant and really combines well with the rest of the flavors. I could feel the strength increasing at this point, MUCH stronger than the First Third.

The Final Third’s profile is close to the rest of the cigar with that great sweet nutty flavor that really sets it off. It also adds some sweet hay note to the profile. The strength continues to ramp up until the very end, and ends firmly in the “full” category. Unlike quite a few of the Figurados I have smoked, this one I was able to smoke to the nub without it getting hot at the end. Great finish! 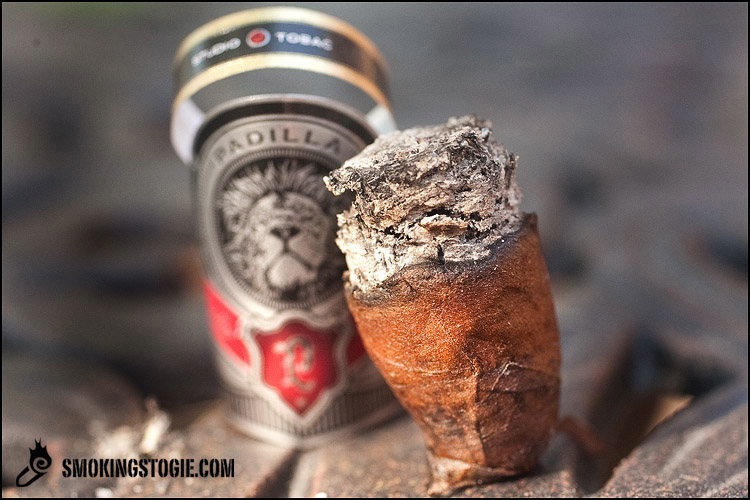 The Bottom Line: I am usually not a huge fan of a vitola this size, by this is a great example of a Figurado done well both in blend and construction. While there is nothing new here in terms of profile, the flavors that are present are extremely distinct, easily discernible and quite nice. While I wish there was a bit more spice throughout the cigar (don’t I always?), the flavors, construction, consistency and finish are all top notch, and the final punch of strength at the end just topped it off. This is one of the best full-strength Figurados I have smoked in a while, and while not an everyday type of smoke (especially at the price), it is perfect for a celebration smoke after a large dinner…