While the cigar industry as a whole was getting ready for the 2019 IPCPR Convention & Trade Show, Padilla was opening a new factory.

Tabacalera Padilla opened its doors in May 2019, operating as a partnership between Ernesto Padilla and Osvani Hernandez, a Cuban-born agronomist who has been making cigars in Nicaragua for a few years.

“I decided the opportunity and time was right to create my own factory,” said Padilla in a statement to halfwheel. “To create new high end blends who’s blends and visions I could control.”

The new factory will be making some of the company’s lines, including the Padilla 1932 and Padilla Miami. But in the announcement of the factory’s opening was a nugget about a new cigar being made there, the Padilla Barrel Proof. Padilla didn’t want to talk about the cigar then, but he’s ready to talk about his upcoming fall release now.

It’s the first blend to come from the new factory, and uses a Mexican San Andrés wrapper, with the binder and filler both coming from Nicaragua’s Jalapa region, specifically Cuban-seed corojo grown on the original farms in the AGANORSA cooperative.

The line will be available in three sizes:

Padilla said he has made 50,000 of the cigars, split evenly among the sizes and packed into 20-count boxes. One thing that hasn’t been set yet is the pricing, though Ernesto Padilla said he expects it to be in the $9-10 range. The cigars are currently scheduled to be released in October.

Padilla told halfwheel that once the Barrel Proof is released, the company will move onto a limited release for select retailers that will commemorate 17 years in the cigar business and will be based on the company’s pre-2007 blends.

“Everyone loves to talk about how big their factory is. I want to speak about how small it will remain. I make millions of cigars at great prices for consumers. But now I want to go deeper into hardcore quality,” said Padilla. 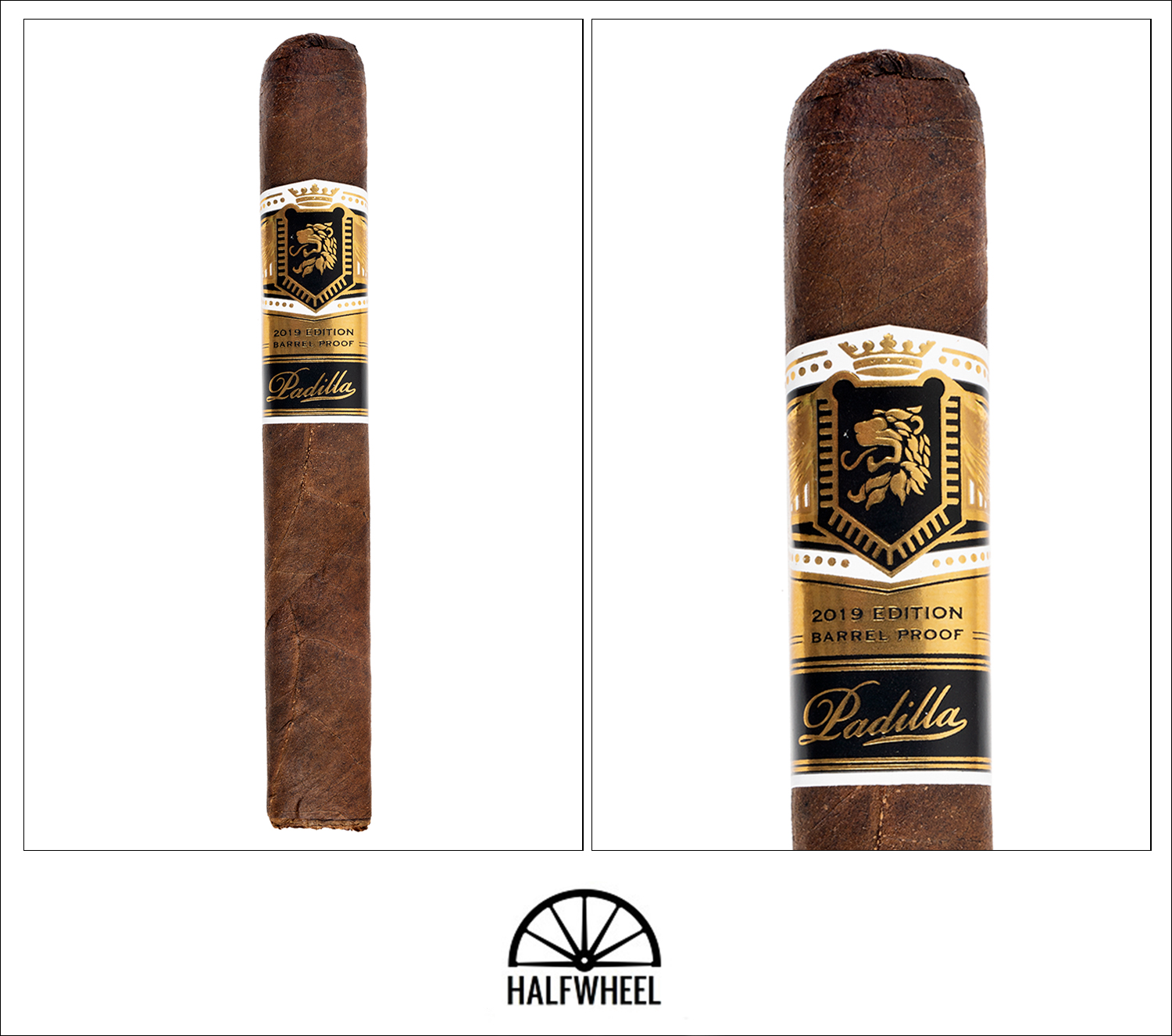 There’s no questioning whether the Padilla Barrel Proof is box-pressed, as it’s fairly aggressive shaping creates sharp corner and the proverbial candy bar shape. For as sharp as the corners are, the cigar has about as much softness when squeezed. Box-pressed cigars contain a bit less filler than their round counterparts in order to facilitate the press, but this feels particularly pillowy. Construction-wise, the cigar looks good below the band, but above it the wrapper leaf doesn’t lay quite right, stretching in ways that reveal a seam and make the head look like it’s been handled. It’s enough to have me wondering if the pressure applied to the head by my scissors will result in some cracks or unraveling. Off the wrapper there is a slightly woody aroma, more organic than lumber in that it reminds me of a tree branch with just a thin skin of bark. There is an aroma of something between cocoa powder and chocolate-flavored protein powder off the foot of the cigar; light, airy and sweet in a distinctive but not overt way, and some samples have a coffeehouse note as well. The cold draw on the first sample is on the open side as air moves almost too easily when I take my first pull. It’s fairly neutral flavor-wise, giving me just a bit of cedar but none of the chocolate sweetness. The other samples show varying air flow—the third is firm while the second is the best of the bunch—and similar flavor profiles.

The first puffs of the Padilla 2019 Edition Barrel Proof ease my palate into what the cigar has to offer by way of a medium-minus profile that has a bit of dry soil, subtle wood and table pepper that provides the slightest tingle on the tongue. The profile can get a bit dry, but it is otherwise enjoyable, particularly if you have a beverage to keep your palate hydrated. When it is at its best, a bit of moist brownie texture takes over, and while it does completely avoid drying out the palate, it does mitigate it a bit. After I knock the first clump of ash as the burn line approaches its second third, pepper through the nose both amplifies and clarifies; what had been a background rumble is now a clear and centered part of the experience, highlighted by a bit more white pepper than black. The construction and technical performance are both very good.

There aren’t a lot of changes to be found at the start of the Padilla 2019 Edition Barrel Proof’s second third, though I do find myself latching on to a light hint of chocolate that the cigar has, similar to a drizzle on a piece of biscotti. It’s far from being an overt flavor and there’s certainly not an abundance of sweetness, but it does stand out from the more earth-centric flavors with which the blend continues to dabble. Coffee beans are notable here as well, while the finish leaves a somewhat rocky earth note on the palate. Retrohales are much fuller than what the palate gets, with black pepper giving a punchy sting to the nostrils on each passing of the smoke.

The final third comes about fairly quickly, and with it, the cigar hits a very enjoyable flavor stride with black coffee, cake donuts, a reduced amount of the dry soil note and a bit of black pepper that settles on the tongue instead of moving to the back of the throat. It’s fuller than the cigar has been to this point, yet it still lacks a grounding note, something I might be inclined to call a backbone. The profile calls out for something to give it some oomph, but it has yet to arrive, almost as if the bass was turned down in your sound system. The final sample does a decent job getting close, though I’d still like a bit more of the earth and its related chocolate sweetness and coffee to round things out. It’s not until the final inch where the cigar shows any signs of bitterness, and its quick onset means it is time to put the cigar down unless I want to continue getting a biting sensation in the middle of my tongue. The burn, draw and smoke production have all been very good. I've long held that Padilla can make some fantastic blends—oh, original release Padilla STUDIO TOBAC Figurado, how I miss you—and while there are some aspects of the Padilla 2019 Edition Barrel Proof Robusto that could be improved, it's still a very enjoyable cigar that doesn't take long to enjoy. At times it feels like the Jalapa-grown tobacco in the binder and filler overshadows the Mexican San Andrés wrapper, which could be a bit disappointing for fans of that varietal, but the overall result still works well, even if it doesn't have the heartier component that would beef up the overall body of the cigar and give it some additional complexity, hopefully not at the expense of the balance the cigar already has. Construction is also quite good, as my only issue was the visual of the heads of the cigars, which likely was the result of the box-press. I'd certainly fire up a few more of these without issue, but the bigger takeaway from this cigar is that it's the first to come out of Tabacalera Padilla and seems to bode well for the future of this young factory.