Back before the infamous split of Pepin and Padilla around March of 2008, they produced a limited edition 1932 Oscuro, which, as the name implies, was the 1932 blend with an oscuro wrapper.

The Padilla 1932 Oscuros were only available in limited edition humidors consisting of 45 cigars; 15 each of the Robusto, Torpedo, and Churchill vitolas. Supposedly, there were only 300 of these boxes produced, which means a total of 13,500 sticks, although I have not been able to independently verify that.

And, taking a page from Padrón, all of the cigars in this Edition are individually numbered.

Here is what the original box of Padilla 1932 Oscurolooks like: 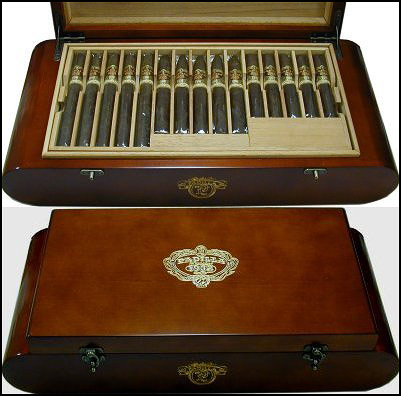 I had been looking for a few of these for a while and happened to find a great reader who was willing to trade, and ended up with two of each size. For this review, I smoked both of the Torpedoes I received in the trade.

Since then, there have been other versions, most notably through Cigars International and its associated websites, but they are not the Pepín-made humidor versions and taste much different.

The first thing I notice about the Padilla 1932 Oscuro is the great wrapper. It is a nice, very dark chocolate brown with a bit of tooth to it and smelled slightly of tobacco, spice and chocolate. The two Torpedoes I smoked each had a bit of plume on them, which was nice to see.

As soon as I took the first puff, I knew this was going to be a great smoke. There is a bit of spice up front, but beneath that is a combination of leather, tobacco, and a creamy note that really sets the first third off. And while there is a sweet undertone, it was a different kind of sweet than I normally taste, more of a tangy sweet than a sweet sweet.

The second third switches gears nearly entirely. Instead of the above flavors, I start tasting a fairly strong oak, along with leather and dark chocolate. The spice that was present in the first third was also almost totally gone at this point, just a shadow of what it once was. The creaminess was also still present, also a very faint fruitiness, which could have just been the remnants of the tanginess from the first third. At roughly the start of the final third of the cigar, I was rolling along, really enjoying the flavors that were present, when it was almost like someone flipped a switch labeled “spice.” Almost overwhelming at times during the last third, but I could still taste the oak, leather, chocolate and cream in the background. It continues that way until the end. This was an extremely complex smoke from the start to the finish. I was hoping for the wonderful flavors of the classic 1932 blend, with the added sweetness and spiciness from the oscuro wrapper, and honestly, that is exactly what I got. What I was not expecting was the added creaminess that was present, and that in combination with the aforementioned flavors really pushed it over the edge for me. This is a very different cigar from most of Padilla's sticks—and quite different from most of Pepin's as well. Quite honestly, it is in a class by itself.