During the 2019 IPCPR Convention & Trade Show, Oscar Valladares Tobacco & Co. introduced what the company is calling its strongest line to date. Named Super Fly, the 70’s themed release debuted in three different vitolas and was made up of a Mexican San Andrés wrapper covering a binder from Honduras and filler tobaccos sourced from the Dominican Republic, Honduras and Nicaragua.

Fast forward to January of this year, when the company announced a brand new variant that would be shown off at a different cigar show, specifically Tobacco Plus Expo (TPE) 2020, which was held in Las Vegas. As with the original Super Fly, the Super Fly Connecticut is packaged in boxes and bands with a decidedly 70’s-esque look, but unlike the original release, the new variant is covered in a Honduran Connecticut leaf, while the rest of the blend includes a Honduran binder as well as fillers grown in the countries of Honduras, Nicaragua and the Dominican Republic. In addition, while the first Super Fly debuted in three different sizes, the Super Fly Connecticut is being sold in only one vitola so far, specifically a a 5 1/4 x 45 corona. Each cigar is priced at $9 and come packaged in 10-count boxes p. As with all of the cigars that he has released so far, the Super Fly Connecticut is produced at the Oscar Valladares Tobacco & Co. factory located in Danlí, Honduras and boxes began shipping to retailers in February. 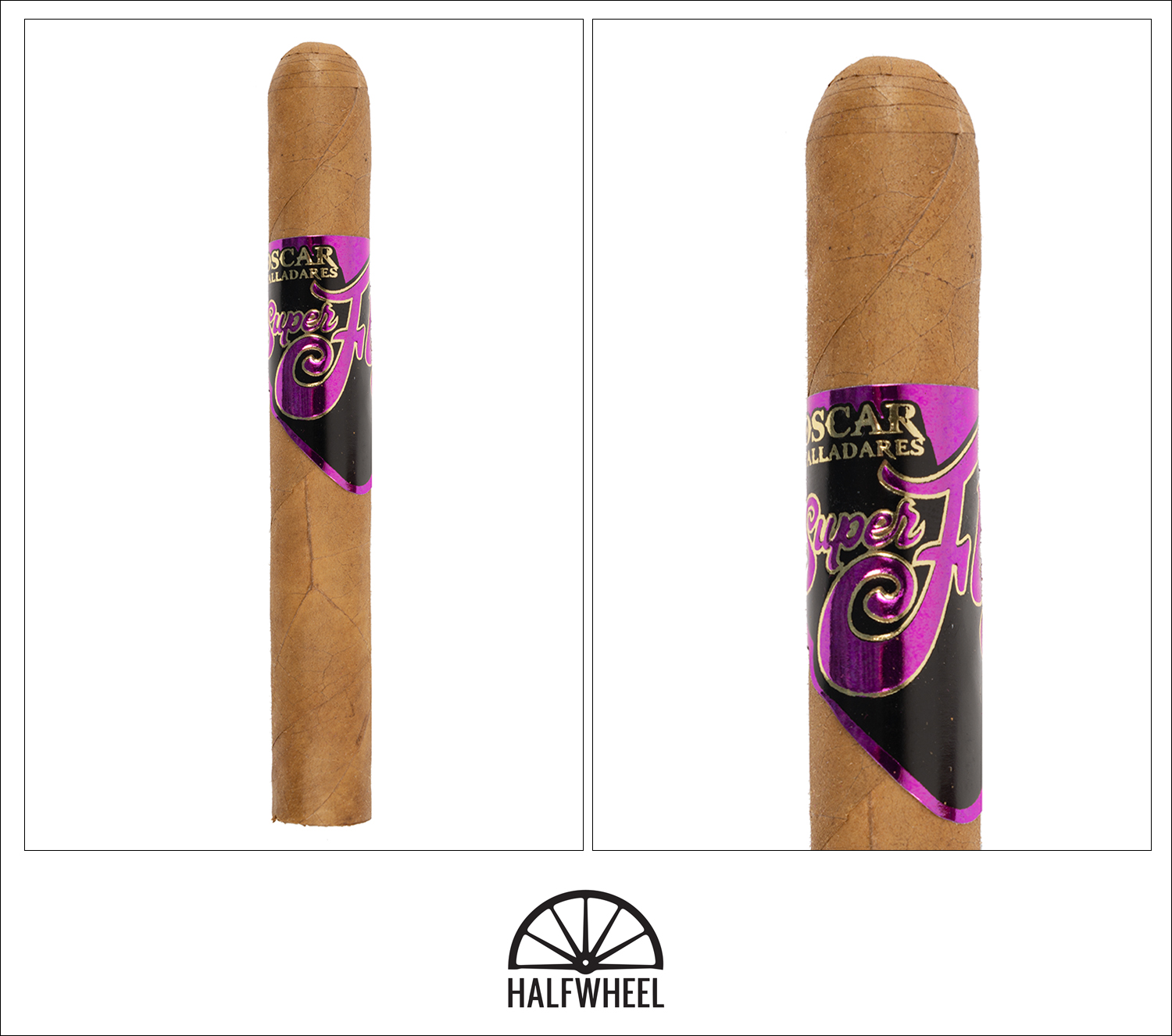 If someone had told me these cigars were infused, I would have believed them without hesitation, as the aroma from the foot and wrapper is almost overwhelmingly sweet, with notes of raspberries, orange juice, cedar, earth and milk chocolate evident, while the cold draw brings flavors of candy apple, lemon rinds, anise, tea, creamy cedar, earth and vanilla sweetness. The wrapper is a very light, golden brown color that contrasts sharply with the iridescent light purple-pink bands and are smooth to the touch with just a hint of oil.

Starting off the first third, the Super Fly Connecticut features an early dominant flavor of distinct sweet tea, followed closely behind by lesser notes of cinnamon, roasted coffee beans, leather, hay, peanut shells and cedar. While the finish is full of bitter espresso, the retrohale has virtually no sweetness at all, although there is plenty of white pepper to go around. Smoke production coming from the foot is above average and the draw has a great amount of resistance and the burn is giving me no issues so far. The overall strength is so minimal that I can barely quantify it for most of the first third, although it does manage to move out of the mild category by the time that third ends.

Coming into the second third of the Oscar Valladares Connecticut, and the main flavor in the profile has shifted from sweet iced to a toasted bread note, with other flavors that include leather, cinnamon, salted peanuts, milk chocolate and cedar, while the espresso bean bitterness on the finish has receded a bit. The sweet tea note that was dominant in the profile in the first third has relocated to the retrohale—albeit not nearly as strong nor as distinct—where it joins the white pepper that continues to hang around. Construction-wise, the draw continues to impress, but the burn has issues early on that need addressing, although it is fine after that. In terms of strength, the Super Fly Connecticut continues to be extremely light overall, although it does manage to move a bit closer to the medium mark by end of the second third. There is just not much change during the final third of the Super Fly Connecticut, with a profile that is virtually identical to the second third. That includes the dominant toasted bread flavor as well as lesser notes of cinnamon, leather, cocoa nibs, peanut shells and hay, along with a bit less aggressive espresso bitterness on the finish. While the sweet tea note continues to be a player on the retrohale, it is becoming less and less obvious as the final third burns down. In terms of construction, the draw continues with no issues while the burn has evened up nicely. Although the overall strength does increase enough to hit a point very close to the medium mark, it never threatens to cross that line and I put the nub down with less than an inch remaining. I cannot recall a cigar in recent memory that features such a disconnect between the aroma and the actual profile as I found in the Oscar Valladares Super Fly Connecticut: the former is full of sweet—almost cloying—fruit notes, while the latter features somewhat more standard flavors of sweet tea, toast and salted peanuts. If you come out with a Connecticut blend these days, it better be very good, very unique, or very interesting; unfortunately, while the Oscar Valladares Super Fly Connecticut has elements of all of those attributes, it never manages to put them all together at once.