Mitchell Orchant of C. Gars Ltd. in the United Kingdom should be a familiar name to many readers of this site; he is one of the top retailers of cigars in the country and runs a huge online store, as well as quarterly auctions of vintage Cuban cigars.

His name has also appeared on a few cigars, first starting with his own curated selections of Cuban cigars that he dubbed Orchant Seleccion for their particular quality, and then working with Akhil Kapacee of Regius Cigars on an Orchant Seleccion branded release in September 2013, with a second installment released in July 2014.

As I mentioned in my review of the Regius Orchant Seleccion, the designation started with Orchant offering hand-selected Cuban cigars via his UK shops that represent “the finest examples of brand, vitola and vintage.” He selects a brand and size of choice with the assistance of Sean Croley, Director of Hunters & Frankau, then a factory and date code, and then he checks the wrapper color and condition of the cigars, pulling samples from four random boxes of a mastercase. If he finds those cigars to be what he describes as a “blend of merit,” Orchant releases between 32–64 boxes of them. The cigars that are selected get a secondary band as well as an additional box sticker denoting their status. Currently, he offers cigars from Juan Lopez, Partagás and Quai D’Orsay that bear the Seleccion Orchant designation, with previous selections including cigars from Ramon Allones, Bolivar, Sancho Panza, El Rey del Mundo and Punch.

Earlier this year, Oliva became the latest company to join the list with the Orchant Seleccion by Oliva. 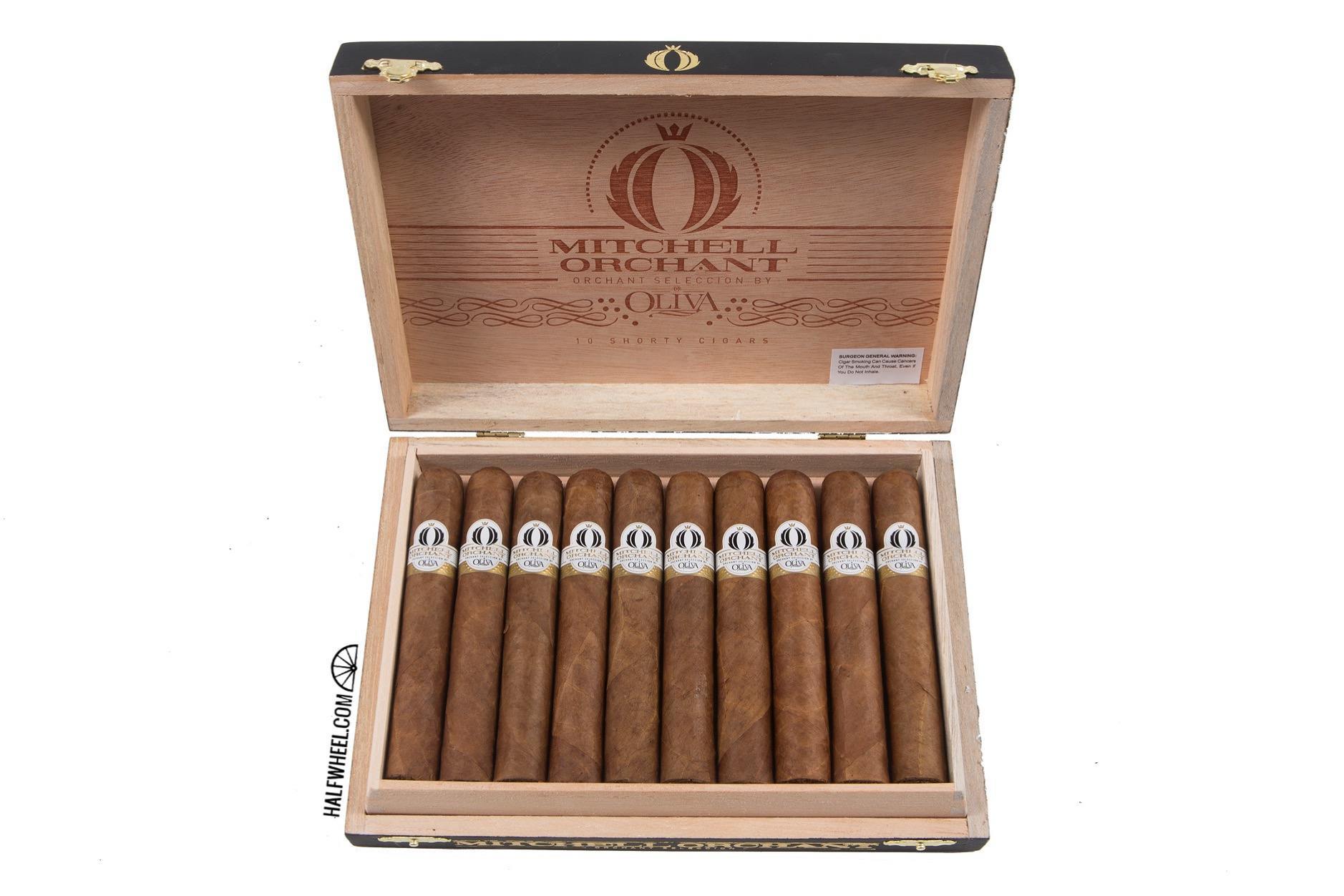 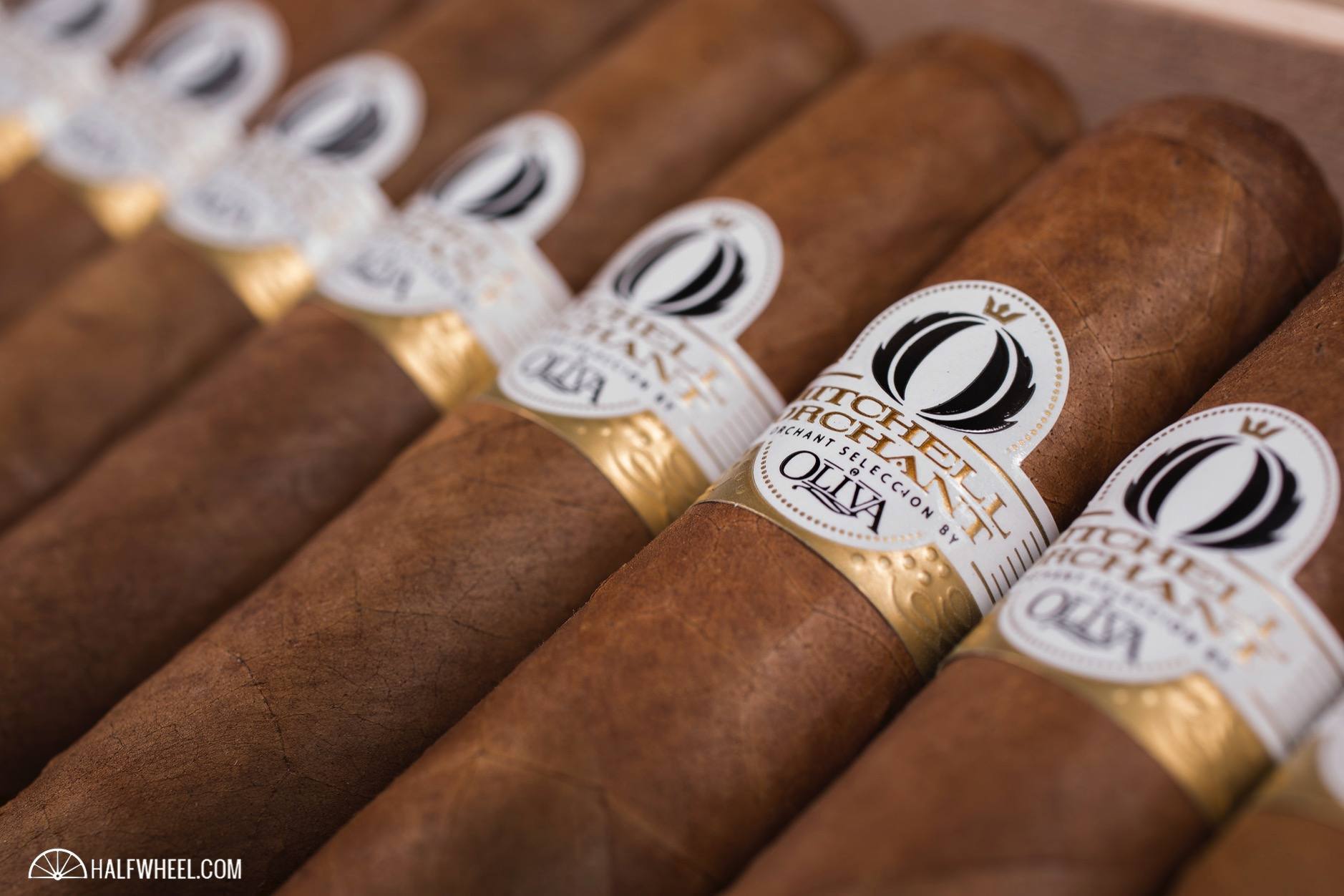 There are three vitolas made for the line. The blend for this cigar is said to be inspired by the Oliva Serie V Melanio, which was released at the 2012 IPCPR Convention & Trade Show and which too uses an Ecuadorian Sumatra wrapper over Nicaraguan binder and filler. The wrapper is a matted, almost dry looking shade of brown that is just on the lighter side of medium, an interesting hybrid color that makes me think of dry desert soil and old barn wood. There is a good bit of texture to it in the hand and while the veins aren’t huge there is no shortage of them, and some seem to stick out from beneath the wrapper. There’s a bit of give to the cigar, showing almost the same kind of sponginess I tend to associate with Cuban cigars, and given the look of the wrapper I’d be interested to see if this could be passed off as a Cuban if it didn’t have its band on. The pre-light aroma off the foot shows just the slightest bit of buttery sweetness and has me thinking of Ritz crackers but with a bit more behind them, with just one of the three cigars offering any notes of pepper. The cold draw is fine and air moves through with no issues, offering a bit of leather and wood, both wrapped in touches of that same sweetness, and again on only one cigar was any appreciable pepper detected.

While pepper wasn’t part of the Orchant Seleccion before being lit, it is certainly part of it after as the cigar opens up with hearty amounts of pepper and shows just what a potent combination Ecuadorian Sumatra and Nicaraguan tobacco can be when paired together. It’s a flavor that almost bites down on the tongue and lips, not so much with brute strength but with sharp teeth. The intensity settles down after about half an inch, though there’s still plenty of earth and pepper for the palate to keep full command of the senses. The ash is fairly weak and flaky, dropping off before the inch mark and leaving fragments of ash all over as puffs detach and scatter the grey chunks. I begin to get a bit more of a physical impression from the cigar before the first third is over; it doesn’t inherently feel like a big hit of nicotine, but there’s no doubting this cigar is trying its best to make a big impression, as I begin to get some traces of leather and mineral on the palate, with retrohales bright and pointed due to plenty of clean pepper. 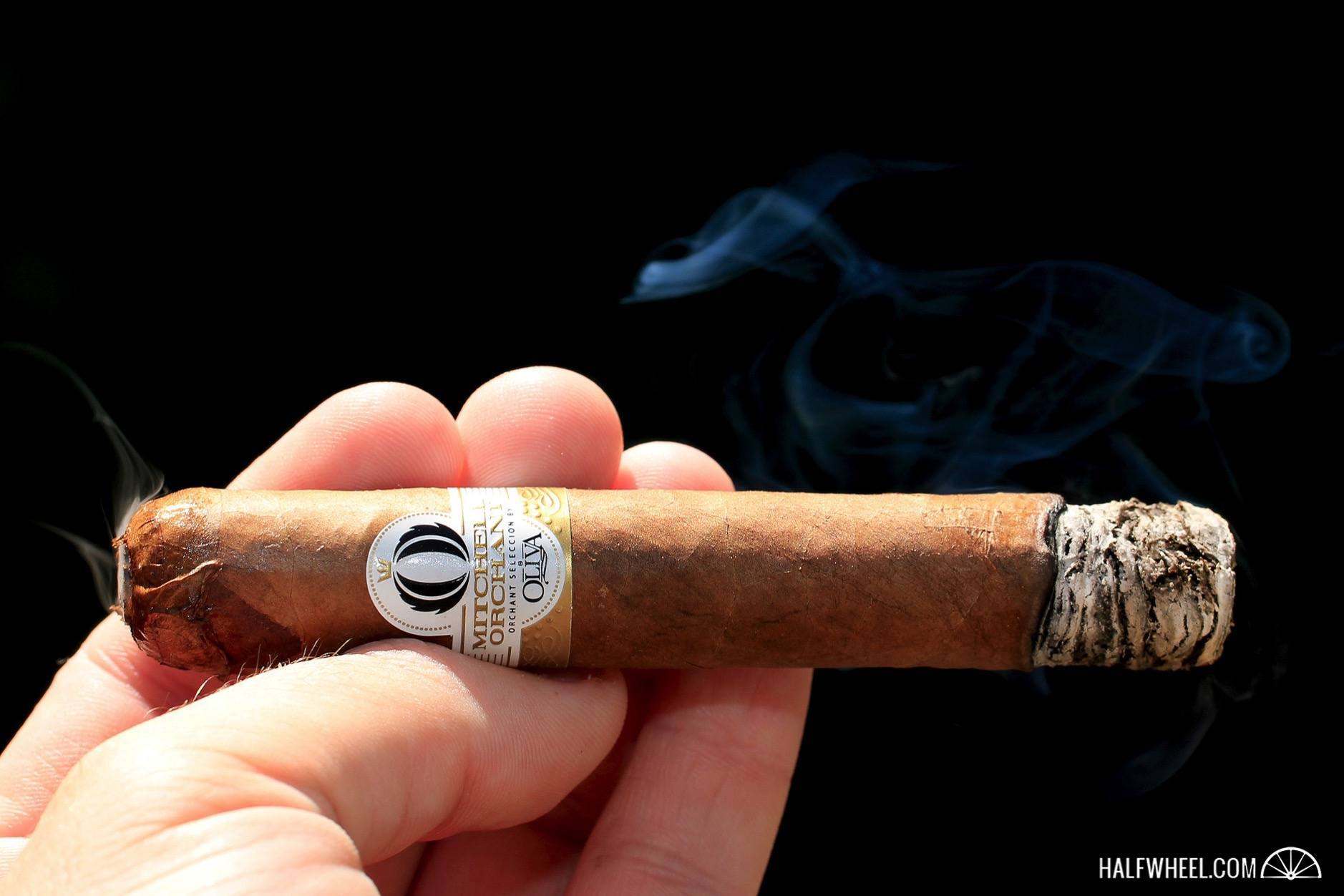 After a big start, the cigar seems to have found a happy middle point of slightly reduced strength by the second third yet it is still offering plenty of flavor via the earth and pepper notes. There’s no presence of any sweetness in the cigar, but the strength of the cigar continues to creep up in the background and I can feel myself beginning to get a bit fatigued from the strength. While it’s not a bad flavor profile, it’s one that seems to tire the palate a bit. Towards the midpoint of the Orchant Seleccion I find about the same level of strength as the cigar started out with, and while the pepper is still very much part of the blend it isn’t quite as overpowering as it was at the start, or quite simply my palate has acclimated to it. Construction continues to be generally very good and the draw is absolutely fantastic, while the burn line is sharp and even. 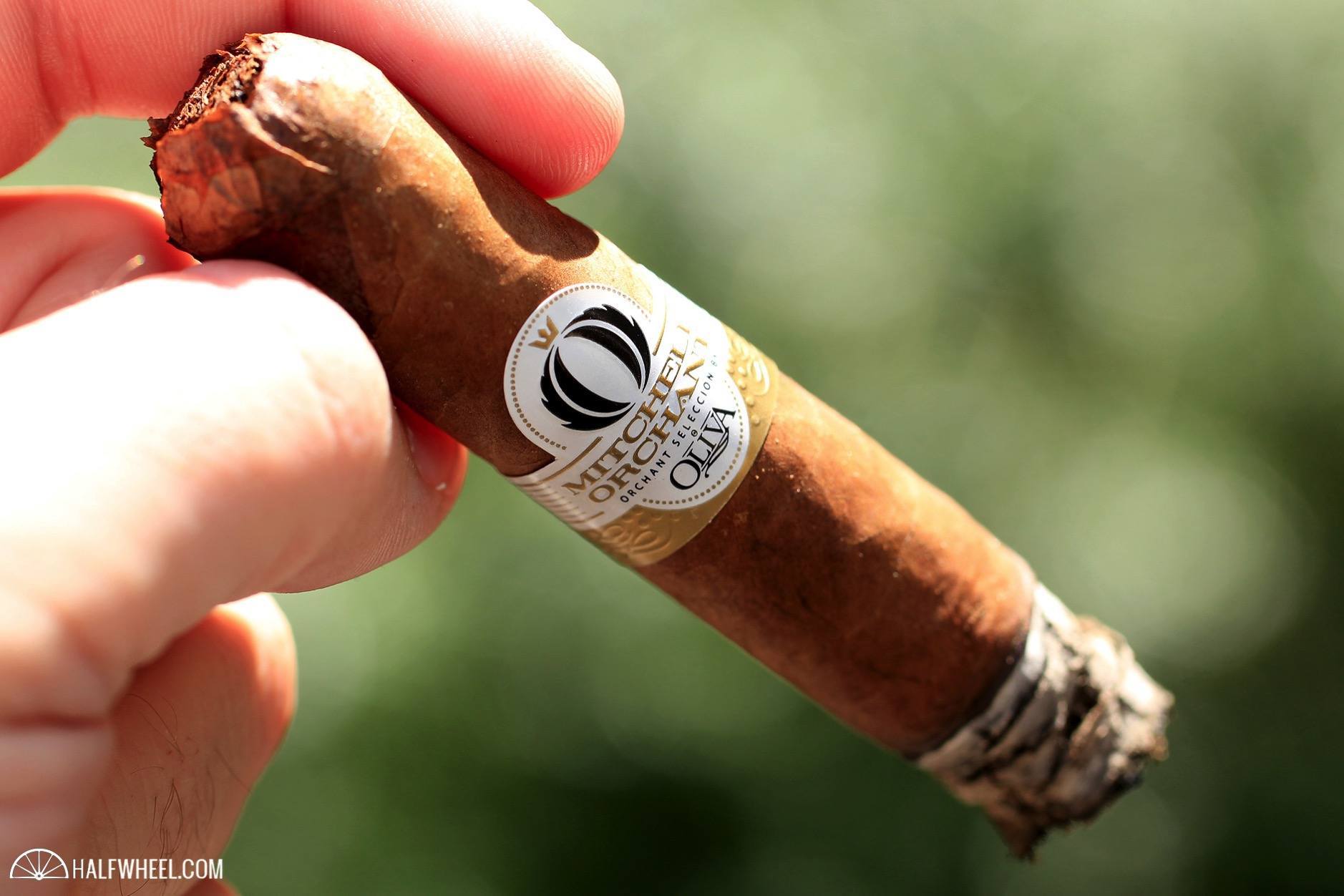 Retrohales and the smoke coming off the cigar while at rest both offer a good amount of pepper, easily the most the cigar has delivered to this point and a trend that I’m wary might make the final section a challenge to get through. I’m also beginning to get my first touch of sweetness, coming across thick in the aroma on an evening with still air, a complimentary note to the strength of the tobacco. Even with this newfound note, there really hasn’t been a single moment of relenting from the flavor nor the development of any complimentary notes to soften the strength or simply add a bit of flavor diversity, something that by this point is beginning to hurt its overall score. While there are bright spots in terms of flavor, the monotony is a bit of a downfall, especially for palates that simply don’t want outright strength from start to finish. With just about an inch left, my palate seems to have grown a bit tired of the flavors and I decide to call this cigar a wrap. I'm always a bit leery when I hear that a certain cigar is based off another one that I generally like, as is the case with the Orchant Seleccion by Oliva and the Oliva Serie V Melanio. I don't think it's necessarily an improvement over the original, unless you thought the Melanio lacked strength and in-your-face flavor. Shifting intensities of the profile is where most of the excitement comes from, as my palate didn't find many deviations from the fairly singular core note, though the touches of sweetness found in the third sample were near divine. I'm still perplexed by the consistent construction issues near the cap that emerged when it was cut, as it was seemed almost planned as opposed to some fluke. The Orchant Seleccion by Oliva is certainly a cigar worth trying if you feel up to it, though bear in mind that its consistent strength may leave you in the same state as it did me: with a fatigued palate and not necessarily wanting another one right away.