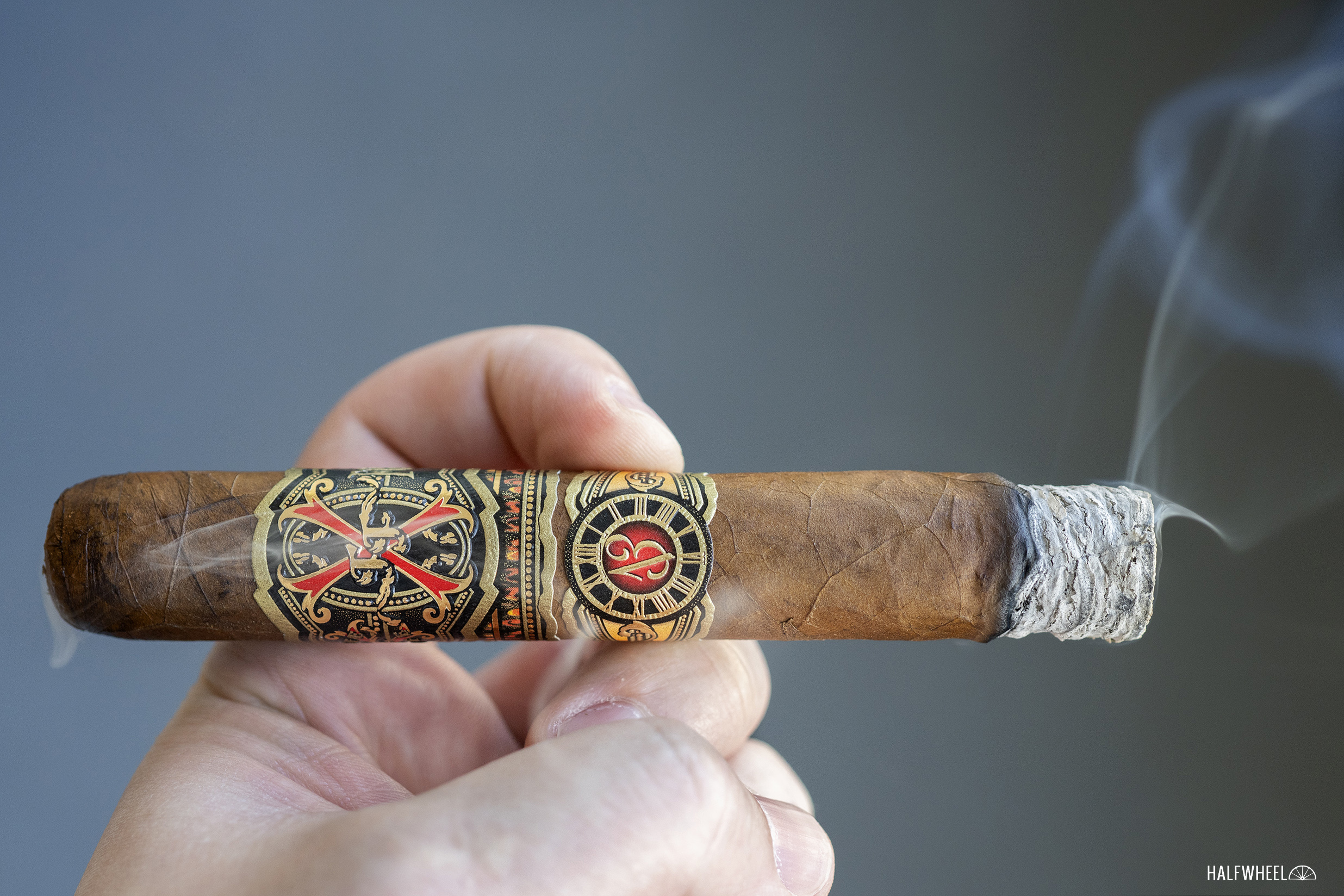 In late 2011, just as we were preparing to turn on the lights at the website you are reading now, Arturo Fuente dropped a surprise. There was a new OpusX.

Not a new Casa Fuente release. Not a new Fuente Aged Selection, i.e. Prometheus, release. Not a new release for a charity auction. A new release sold at stores, none of whom seemed to know what they were getting. It was called Fuente Fuente OpusX ForbiddenX 13, made in honor of the company’s upcoming 100th anniversary celebration. Retailers were told more or less nothing about the cigars, other than the six cigars’ names, prices and sizes—one of which was incorrectly listed—and to this day, there’s not really much more known about the cigars.

Since then, the ForbiddenX 13 band has been used on other special cigars—including some of the releases included as part of Fuente Aged Selection releases—and the six vitolas made a follow-up appearance in 2018 as a release for the Tobacconists’ Association of America (TAA) retailers.

In December 2020, Arturo Fuente more or less did the surprise release strategy again, this time under the cover of Rare Pinks. For much of the latter part of 2020—particularly in Q4—the company had been promoting its upcoming Arturo Fuente Rare Pink Vintage 1960’s Series, a new four-size line of perfectos.

And while there was no press release for Rare Pink, it wasn’t exactly surprising to hear that those cigars had arrived at stores. What was odd was that some stores were also receiving new sizes of ForbiddenX 13.

Specifically, there were four new versions of OpusX ForbiddenX 13, two of which were the same sizes as cigars from the original ForbiddenX 13 series. Those four sizes are:

While multiple people that work for Arturo Fuente didn’t answer questions—beyond acknowledging that the cigars existed—about the release, it’s quite obvious that this isn’t the same as the original. The most obvious change outside of the name is that the cigars are packaged in boxes that use the same design—albeit with different color schemes and graphics—as the OpusX 20 and OpusX 2020.

Furthermore, the cigars were wrapped in cedar sleeves, something that was not part of the original ForbiddenX 13 release.

If you were lucky enough to smoke the original ForbiddenX 13, it’s pretty apparent that these four new sizes have a different colored wrapper compared to the 2011 and 2018 cigars. 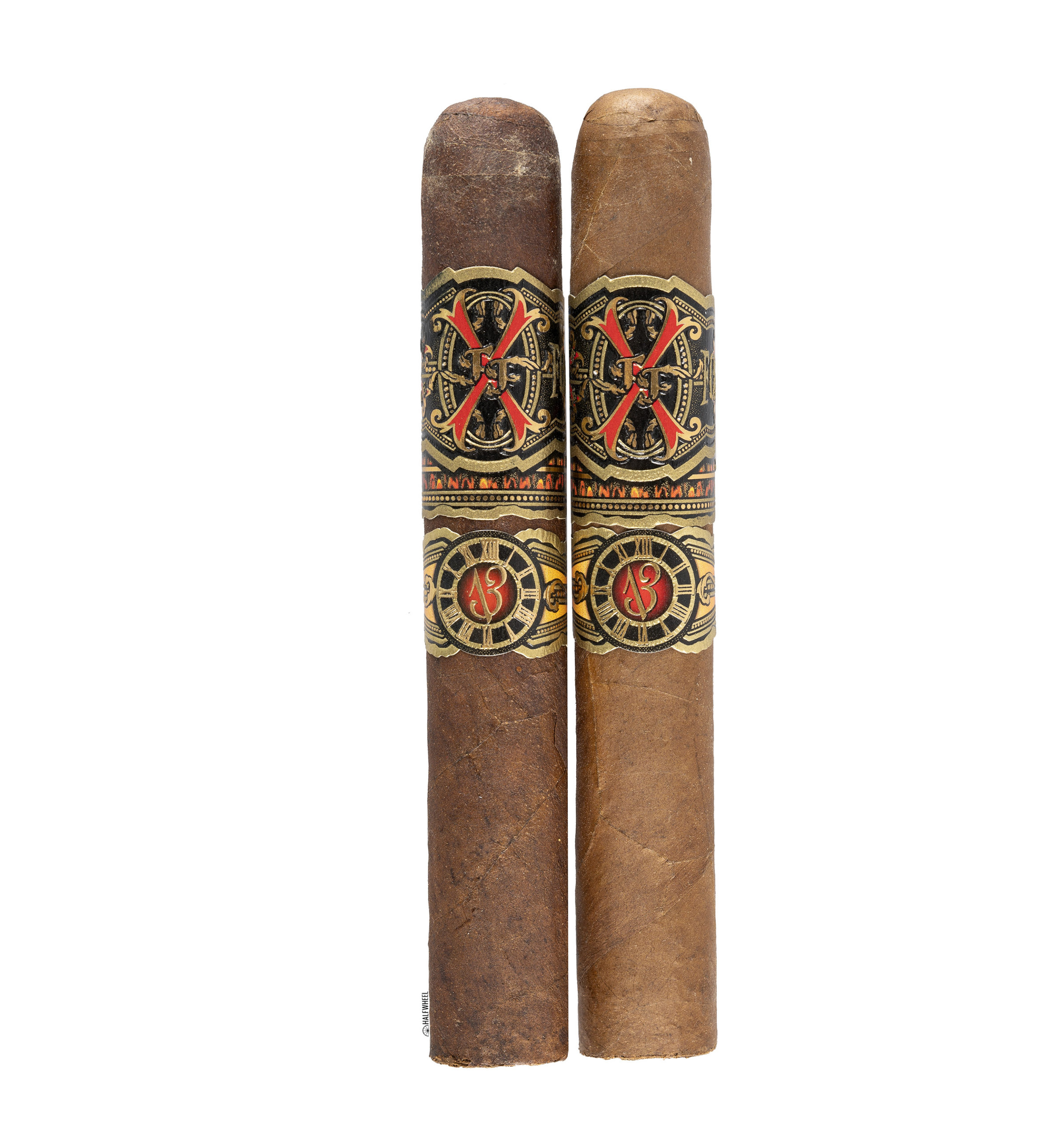 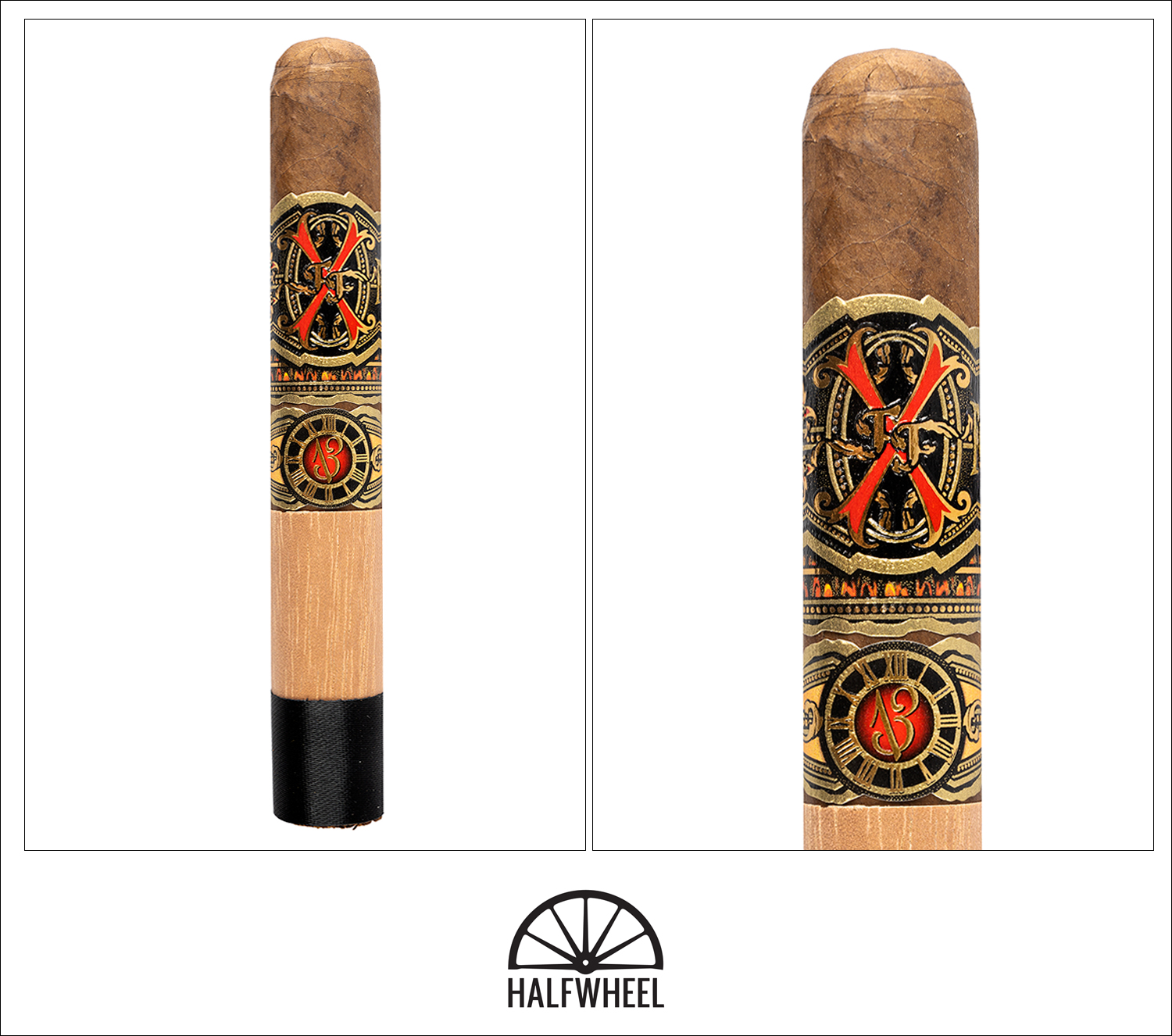 While the original OpusX ForbiddenX 13 had wrappers that were noticeably darker and less red than the regular OpusX, this cigar’s wrapper is actually pretty close to regular OpusX. I’m pretty sure that most people wouldn’t be able to tell if this was rebanded as regular OpusX, though it too is missing some of the red hues. Some of that might be my eyes adjusting to the black band compared to the red band, but this is pretty close. These cigars weren’t stored in cellophane, though they are wrapped in a cedar sleeve. While the cedar takes up quite a bit of the wrapper’s surface area, it doesn’t seem to impart that much aroma into the cigar. I pick up a bit of cedar aroma along with something that reminds me of copier paper as well as sage. The foot is much more vibrant with wheat, floral flavors and pizza crust. The cold draw of Deseos d’Amor is similarly sweet with floral flavors, something that reminds me of freshly fried potato chips, bread and raisin. It’s medium-full, substantially more intense than the aromas I pick up from the cigar.

It looks like an OpusX and it starts like an OpusX, as I get a classic OpusX mixture of woody flavors, sweetness and cedar, along with some meatiness that is a bit foreign to the Opus experience. One thing that’s absent on the first puff is pepper, and while there’s more as the cigar goes on, it’s never that much and certainly far from many other regular production OpusX cigars. The flavor profile is crisp with cedar, sugar cookies, earthiness and a hint of sourness. It finishes with grain, cedar, oak, sweetness—but less than when the smoke is still in my mouth—and some pink salt in the back of my mouth. Retrohales are creamy with sweet cedar, a vibrant gingerbread profile and then some toastiness, which carries over to the finish. Speaking of the retrohale’s finish, there’s toastiness, bread, melon and a deep coffee flavor. Flavor is full, body is medium-full and strength is medium-plus. One cigar needs some help with the burn, but the other two avoid a touch-up, though the burn is far from perfect.

While the sweetness has declined overall, there’s an interesting strawberry note that I pick up in the second third of the OpusX ForbiddenX 13 Deseos d’Amor. It’s nowhere near the intensity of the nuttiness—which is the main flavor at this point—but it accents everything it touches. In addition, the main profile has cedar, pasta and a touch of acidity. The finish is more savory than the main flavor with cedar, earthiness, roasted flavors and a vibrant peanut shells. Retrohales start with some short-lived floral flavors that get overtaken by roasted flavors, paprika and something that reminds me of ginger. What’s really bizarre is that while I’m pushing the smoke into my nose, there’s a weird sensation—almost like a carbonated water—that is occurring on my tongue. It only lasts for about 10 minutes or so, but it’s present on each cigar and doesn’t make that much sense to me. The retrohales finish with fruity flavors, including an unripe strawberry, along with bread, cedar and leather. Flavor is full, body is medium-full and strength is medium-full. While the draw and smoke production are excellent, the burn isn’t straight and I’m forced to make a correction on each cigar. 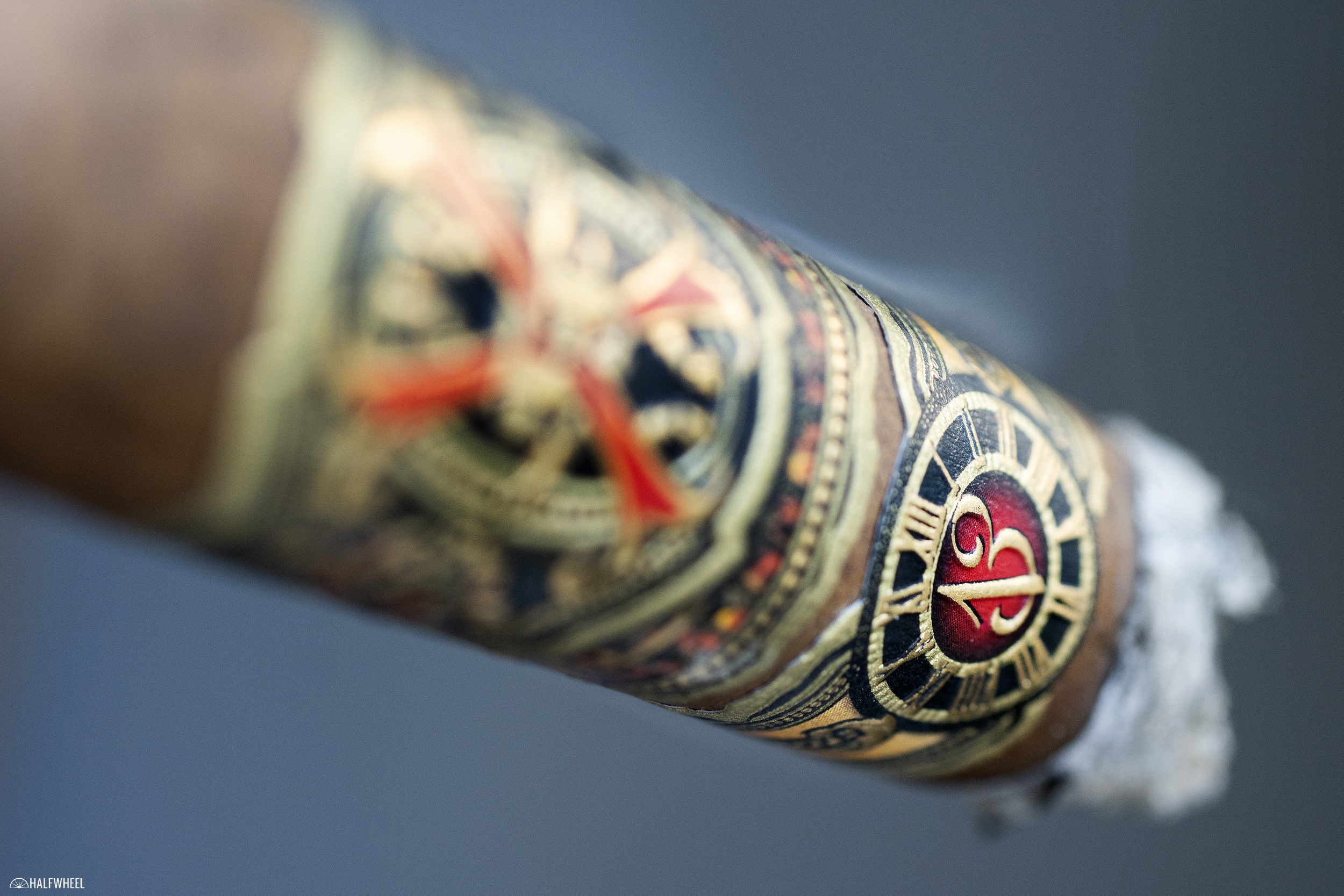 The nuttiness continues to build in the final third and as much as I enjoy that flavor in cigars, I think it’s actually drowning out a lot of secondary flavors. I now get some leather, fruitiness and remnants of cedar, but there’s not much. As the finish develops I find more acidity, white pepper and pizza crust, but then there’s a healthy dose of nuttiness. The retrohales have a longer-lasting floral flavor, meatiness, earthiness, oak and some generic spices. It finishes with meatiness, lemon and some of the spice mixture. Given the relative lack of pepper up until this point, the retrohales in the final third are far and away the most aggressive part of the profile. Flavor is full, body is medium-full and strength is medium-full. As has been the case up until this point, the only construction issue I have with the OpusX ForbiddenX 13 Deseos d’Amor is the uneven burn. 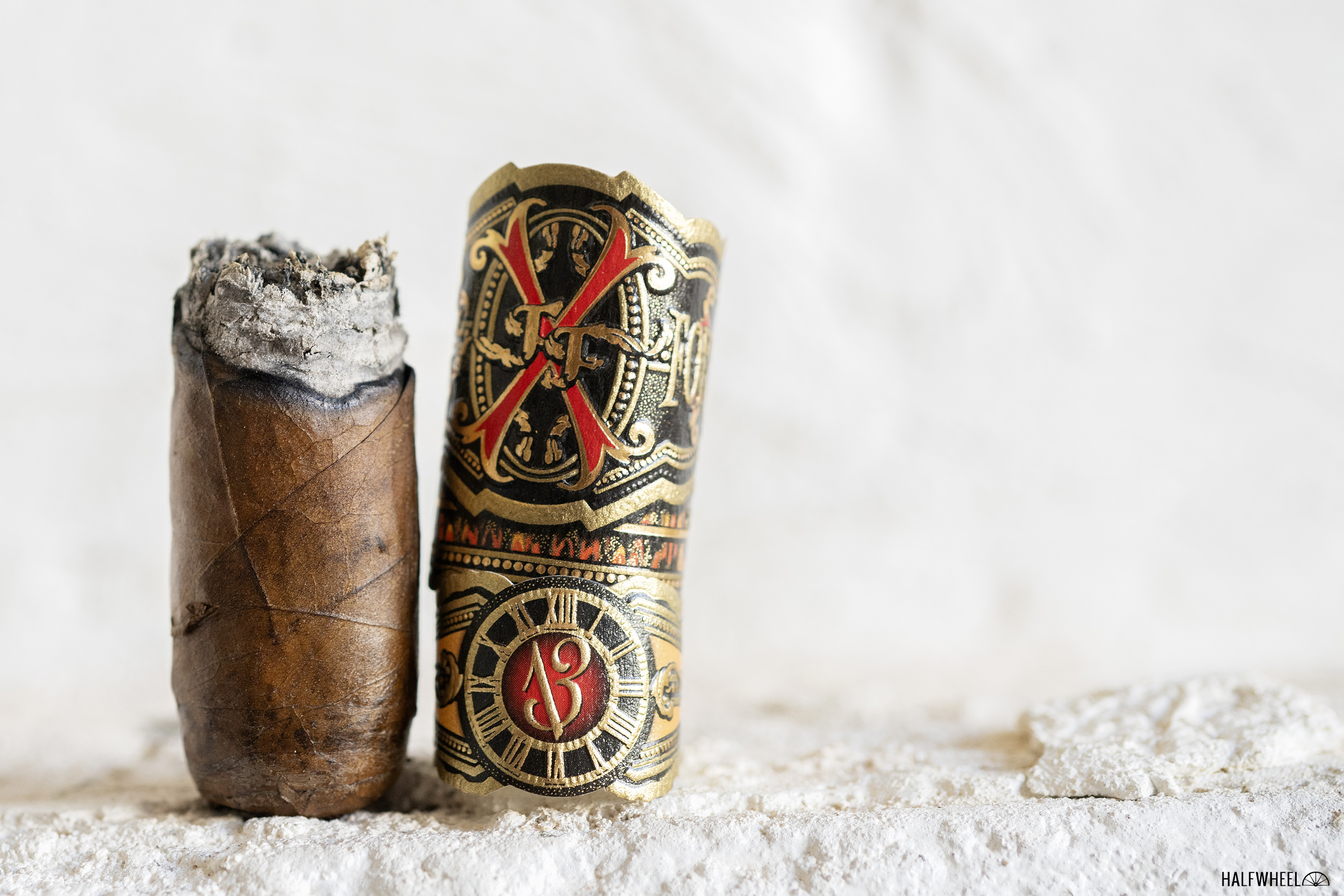 The Deseos d’Amor is a very good cigar with an uneven burn and, as such, a score that probably doesn’t reflect how much I enjoy it. There are now so many different blends that have worn OpusX bands, I’m not sure how to make this complete without it being far too long, but in broad terms, my order of enjoyment from most enjoyable to least goes: original OpusX, original ForbiddenX 13—big gap—OpusX 2020 (Green), OpusX 20 (Blue), gap, Oscuro, Lost City. This falls somewhere within the “big gap” range, placing it third. As someone that enjoys both regular OpusX fresh and with age, this is sort of a hybrid. It’s certainly milder in strength and pepper than a fresh OpusX—though I’d argue that OpusX’s strength and pepper is somewhat exaggerated compared to many newer cigars—but it shows a wider range of flavors similar to OpusX after a few years of mellowing out in the humidor. For me, the signature OpusX recipe has been marrying a unique cedar and sweetness with power; this has traces of that DNA, but it’s fairly easy to tell that it’s not the exact recipe, particularly when compared to the regular OpusX Robusto’s profile.