In 2012, we heard murmurs of a new version of the Fuente Fuente OpusX–called Angel’s Share–that would be released to commemorate the company’s 100th anniversary. It is said to be a tweaked Fuente Fuente OpusX blend with a different wrapper blended to be sweeter than a normal OpusX with a noticeable reduction in strength. Instead of the top priming, Angel’s Share was said to use leaves from the middle portion of the tobacco plant.

People at Arturo Fuente told us the cigar was created to provide an OpusX experience for smokers who couldn’t handle the strength of the famed brand. The name Angel’s Share is used by winemakers who use oak barrels to store their wine while it ages. As time passes, some of the wine in the barrels evaporates, and that specific wine that disappears is called the Angel’s Share, referring to the belief that angels watch over the wine, sample it and give their blessings.

Here is what I said in my original review back before it was first released in October 2012:

It’s almost shocking it took Fuente this long to make a milder OpusX given how well the brand is known amongst non-smokers, who likely will struggle with strength of a non-aged version. While they definitely made it milder, it’s not that mild. I can tell you that it is stronger than it looks; I can tell you that it is exceedingly creamy and somewhat sweet throughout; I can tell you that the construction is excellent; and I can tell you that I enjoyed it quite a bit. Even if this retails over standard OpusX pricing, like the cost of the Prometheus version, Angel’s Share is still one of the best medium to medium-full cigars of 2012. If in fact Fuente was going for a medium to full-bodied cigar with creaminess, nuttiness and sweetness contrasted by the white pepper, something I really enjoyed, they nailed it.

Covered in a medium brown wrapper that is silky smooth to the touch, the OpusX Angel Share Robusto sports a slight box-press and a gorgeous triple cap. The wrapper is significantly and noticeably darker than the ones in my first review, and the cigar is just short of being as hard as a rock when squeezed. Aroma from the wrapper is a strong and offers an almost shockingly distinct peanut butter note, along with just a touch of leather and cedar, while the cold draw brings flavors of cinnamon, cedar, sweet raisins and an interesting floral note.

Right off the bat, I get some crazy flavors that come and go, but a strong combination of creamy nuts and cinnamon is dominant for much of the first half, along with other notes of leather, cedar, espresso, hay and a slight floral flavor on the retrohale. There is a significant pepper kick through the nose in the first few puffs, but that starts loosing strength almost immediately, and by the halfway point it is at very manageable levels. I do notice some slight raisin sweetness that comes and goes throughout the first half, and it seems to be getting stronger as the cigar burns down. The second half of the Angel’s Share Robusto sees a sharp increase in the floral note, along with less cinnamon and quite a bit more creaminess to the profile overall. Other flavors of peanuts, leather, earth, cedar and espresso flit in and out, while a spice on the tongue that was not present in the first third gradually gets stronger until the end of the cigar. The sweetness is also stronger, and has shifted to more of a nutmeg flavor, which combines nicely with the pepper that is still present on the retrohale, although not nearly as strong as it was at the beginning of the cigar. 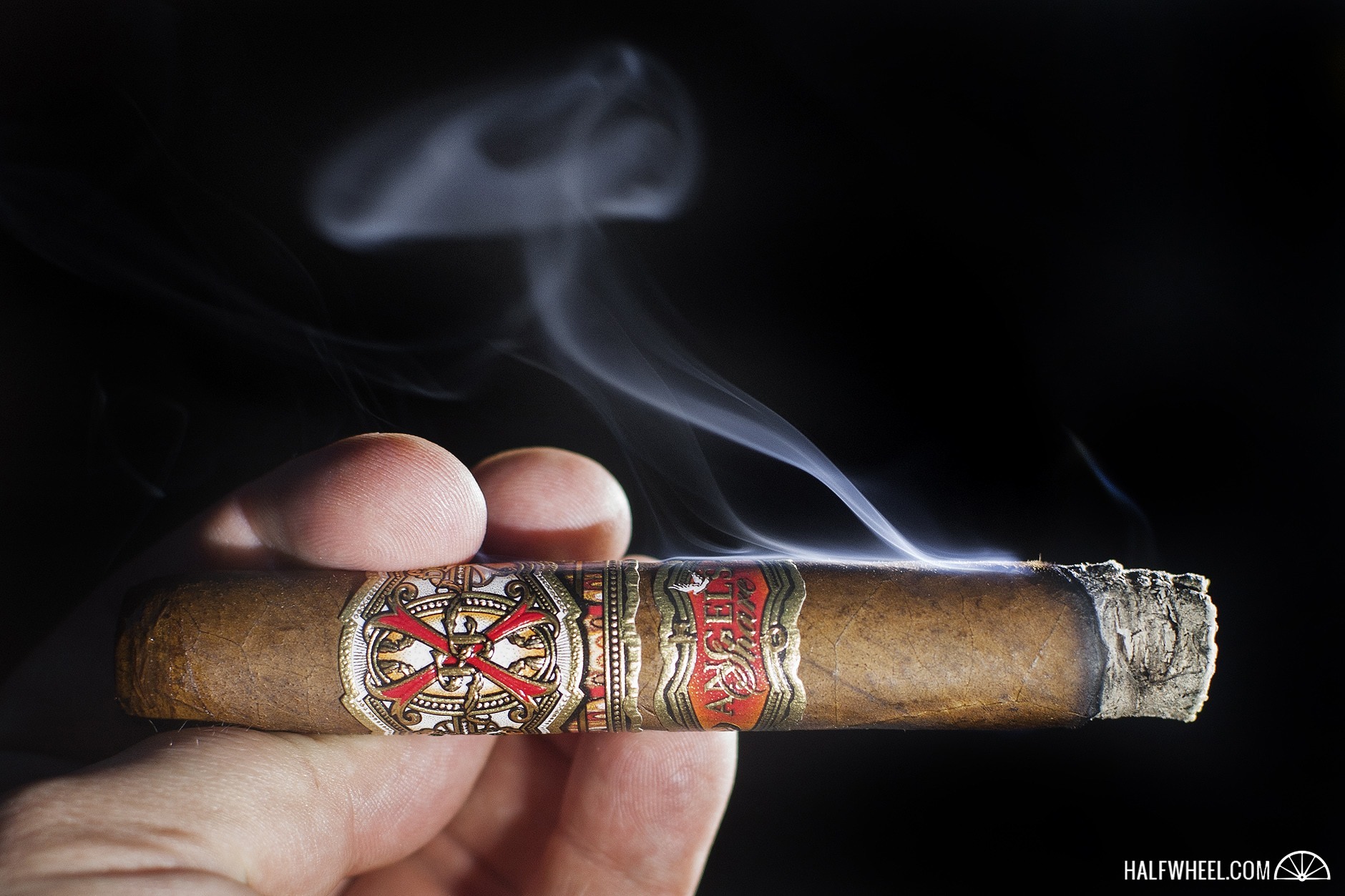 Construction-wise, the OpusX Angel’s Share features an excellent draw with just the right amount of resistance for me, along with a burn that barely needs touching up for the entire length of the cigar. Smoke production is a bit below normal, but what comes off of the foot of the cigar smells just like the peanut butter note the wrapper had, albeit not as strong.The overall strength starts out mild in the firs third and easily reaches the medium mark just a little past the halfway point, but stalls out there, never going higher than a slightly stronger than medium.

While the four different samples I smoked—the three I smoked for the original review and the one I smoked for the redux—did not taste much alike, they did have a few things in common: excellent construction, a wonderful balance and an extremely complex profile. I find it interesting that the profiles were so different, but there were similarities, especially in the creamy nutty note and raisin sweetness that was present. A complex, well-blended cigar that should age well, and is approachable by just about anyone who wants to try it.