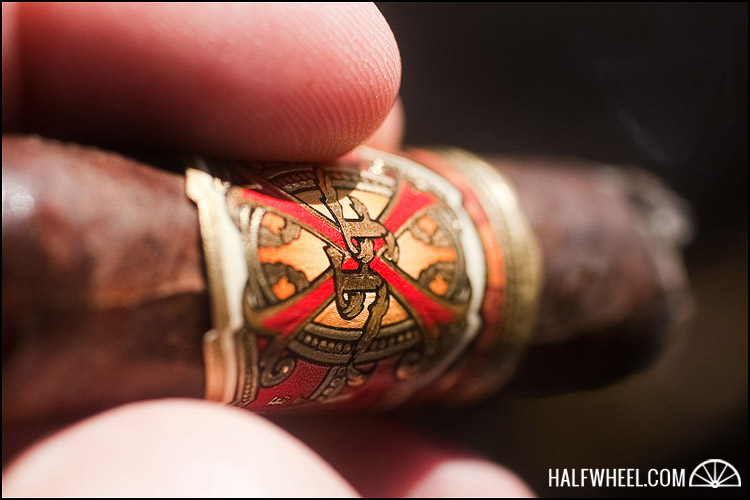 Ask anyone who has been smoking cigars a while, and most likely, an OpusX Maduro will top the list of cigars they want to smoke before they die. Made in extremely limited quantities, when you can find them for sale (usually on the secondary market), they are not cheap. However, some people may not know is that the Fuentes changed the type of Maduro wrapper that is used on these OpusX Maduro cigars, sometime around 2001 or so. The wrapper that was used on the original Maduros is a hybrid Cuban-seed grown on the Fuente Farms in the Dominican Republic, while the wrapper that is used on most of the newer OpusX Maduros (like the BBMF Maduro, for example) is (most likely) Connecticut Broadleaf. Here is a comparison photo of the original OpusX Maduro wrapper (top) to the regular OpusX Rosado wrapper (bottom):

About the Original Maduro Wrapper, Vitolas.net says it thusly:

OpusX Maduro cigars have a hybrid Cuban seed wrapper grown in the Dominican Republic on the Fuente farms; this wrapper is different from the Añejos, which use Connecticut broadleaf maduro wrappers. The OpusX Maduro wrappers were grown on a small part of the Fuente farm, on the side of a hill, where they were left out longer to ripen before harvesting. Because of the limited area they are grown in, and the additional exposure to the elements, the yield was very small. The Maduro wrapper brings a unique cocoa flavor and sweet balance to the normally very spicy OpusX flavor profile.Fuente has not been growing the maduro OpusX wrapper since 2001, so the potential supply of these cigars is currently even more limited.

So, the only way you could get these specific Robustos (with this specific wrapper) was to purchase one of the so called ForbiddenX humidors, only 100 of which were sold (for a whopping $10,000 each) in 2002. With only four of these OpusX Robusto Maduros included in each humidor, theoretically there are only 200 of these specific cigars produced back in 2002, although there are reports of these same cigars selling at later times. In 1992, the Fuente family planted the first seeds of the wrapper leaves for Fuente Fuente OpusX at Chateau de la Fuente in Dominican Republic.  In 1993, the first FFOX cigars were made with this legendary wrapper.  In commemoration of the Fuente Fuente OpusX Tenth Anniversary, Prometheus International, Inc. produced 100 FFOX ForbiddenX humidors in 2002. 100 FFOX ForbiddenX humidors were produced in three different veneers. The first 50 cigars of Carlos Fuente Jr’s special never-been-released collection of 100 FFOX cigars were shipped with the humidor to the authorized Prometheus dealers in November 2002 and the remaining 50 cigars,  in June 2003. The cigar itself is covered in a darkish, reddish brown wrapper. The wrapper is fairly smooth to the touch, but rustic looking, and smells like a combination of barnyard, hay, cedar and espresso. It is hard as a rock when squeezed, almost no give at all. The first third opens with just a bit of spice, along with flavors of sweet oak, leather, espresso, dark chocolate  and hay. A great opening to a cigar and extremely smooth. Not very strong at this point, probably a very medium minus.

The second third has a great sweetness come roaring to the forefront of the profile, along with some of the same flavors: oak and leather are the strongest, but the espresso and chocolate are still around as well. I can feel the profile getting MUCH stronger, and it ends the second third at a solid medium.

The final third gets stronger still (and ends at a strong medium) and the leather and cedar that were so strong in the first two. Thirds have receded quite a bit, but a different flavor was added, a noticeably sweet almond note, along with the espresso and chocolate. It never got harsh at the end, and was easy to nub. Reviewing a cigar like this has some major pitfalls. Very few people have been able to enjoy them and as more and more are smoked, fewer still ever will. Having said that, while this was a very good cigar, it was not the end all/holy grail that many people might think it is based on its rarity, and certainly nothing to actually go out and pay the open market price for. It does have a distinctly different profile compared to a regular Opus. Having said that, I have smoked quite a few of the BBMF Maduros and a few of the 2004-banded Opus Maduro Robustos, both of which have the newer Maduro wrapper, and honestly there is no comparison. The original Maduro wrapper wins in a landslide flavor and complexity wise. Honestly, I liked this version of the Opus a bit better than its Rosado (normal) counterpart, but in my opinion, the blend still does not hold a candle to the Casa Fuente blendwith its Cameroon wrapper.