Holy Grail Week 2019 kicks off with a cigar that might have some people wondering why we’re we’re reviewing it, since OneOff just came out last summer, right?

While Dion Giolito acquired the rights to the brand in 2017 and relaunched the line in the summer of 2018, this isn’t that cigar. Rather, it’s one of the original releases that date back to the early 2000s.

The OneOff line was created by Andrea Molinari in 2001, who in addition to becoming known as the man behind the cult-like brand, also operated a La Casa del Habano retail shop and the Cigair lounge and restaurant, in addition to being the ceo of Lauda Air S.p.A., an Italian airline. Molinari wanted his own cigar, specifically one made in Cuba, yet couldn’t find the right channels to fulfill his wishes. So he turned to other cigar-producing countries, finally developing the cigar with Segovia Cigars S.A. factory in Nicaragua, a facility now known as Plasencia Cigars S.A.

The blend featured a Honduran wrapper on top of a Nicaraguan binder and filler, with the cigars dressed in nothing but an orange-ish band with an off-white peace symbol, and coming in similarly spartan boxes that did bear the OneOff name. The cigars, occasionally referred to as the Peace Symbol cigars, became a bit of a cult classic through the mid- to late-2000s and even into the 2010s, reaching upwards of 16 sizes being available. However, their history changes around that time. Initially launched in Asia and Europe, the OneOff line found its way into the United States in 2002. While distribution had been originally handled by Felipe Gregorio Cigars Inc. from its launch until being transferred to Paul Giacalone in 2004. It would add a more wallet-friendly line called OneOff Allegria in 2004, with the regular production cigars costing in the mid-$10s to upwards of $20 range. There were also OneOff branded accessories being made, including a travel humidor and ashtrays.

Before the 2000s closed out, the line would change hands to the Miami, Fla. retailer Cuban Crafters, also known for their humidors and cigar cutters. It got a new blend and lower price tag, as well as an offshoot brand called OneOff Doble Capa that used two wrappers, a darker top half and lighter bottom half. The changes seemed to tarnish the shine that the original brand had, and it quickly started to fade from the landscape. Dion Giolito would try to purchase the brand in 2011, before ultimately abandoning the attempt. The cigar does in fact measure the same 5 3/8 x 46 vitola as the rereleased version I reviewed in August 2018, though it appears to have swelled just enough—or possibly be just enough out of round—to scrape the sides of the ring gauge I use to measure it. The short and fairly thick fantail is still in good shape, and other than a slightly faded band the cigar looks quite good. It’s an incredibly firm roll, with the wrapper leaf a toffee color with generally even coloring, some very small veins and a surprising amount of oil left in the leaf as it is incredibly smooth in the fingers. The foot of the cigar is fairly unexciting, showing a bit of orange peel and generic pre-meal breads, with one sample adding a bit of half-and-half creaminess. The cold draw is firm on one sample and a bit loose on the other, both producing a thick taste in the mouth though it isn’t bursting with flavors. I get a mix of the bread notes and creaminess, with no pepper, sweetness or other note wanting to step forward.

While the cold draw and pre-light aroma had me concerned that this original release OneOff Corona Gorda might be a bit skeletal, the first puffs allay those fears with a thick corn and wheat flavor, a combination of corn flakes, shredded wheat and breads. Sadly, the first clump of ash drops off at just about a quarter inch in length and well before I was ready to take a picture of it, which is slightly disappointing. The ash is one of the starkest differences between the two samples, as the first is dark and flaky, while the second is a very light gray that holds on quite well. The flavor stays on the mellow side for the first third, picking up just a bit of sourness similar to what I’d expect from a shade grown Connecticut wrapper after a relight on the first cigar, nothing bad enough to overly detrimental to the profile. The second is a bit sweeter, almost like vanilla ice cream at times, both offering fairly smooth retrohales, that glide out of the nostrils, though one sample shows an increasing amount of pepper. The cigar’s technical performance is quite good with an even burn line, smooth draw and decent amounts of smoke. The OneOff Corona Gorda starts off its second third without changing the profile much; the sourness is gone and the cigar returns to a more bread-forward profile that is wheat dominant but not exclusive. There’s still little in the way of pepper or sweetness from the first cigar, if there’s even any to be found as the burn line approaches the midway point. The second cigar, which was much more alive than the first, has dialed itself back ahead of the midway point and now is quite similar in its profile, though shows a bit more pepper and wood-forward notes. With the cigar burning fairly quickly it makes quick work of this section, and with the final third quickly approaching the first cigar makes its first notable change, getting dry and woody, with just a bit of thin pepper coming in to hit the palate, a profile the second cigar seemed to ease into more gradually. The final puffs create a very interesting mouthfeel as the roof of the mouth, front half of the tongue and inner part of the lips get a very unique tingle from the smoke. 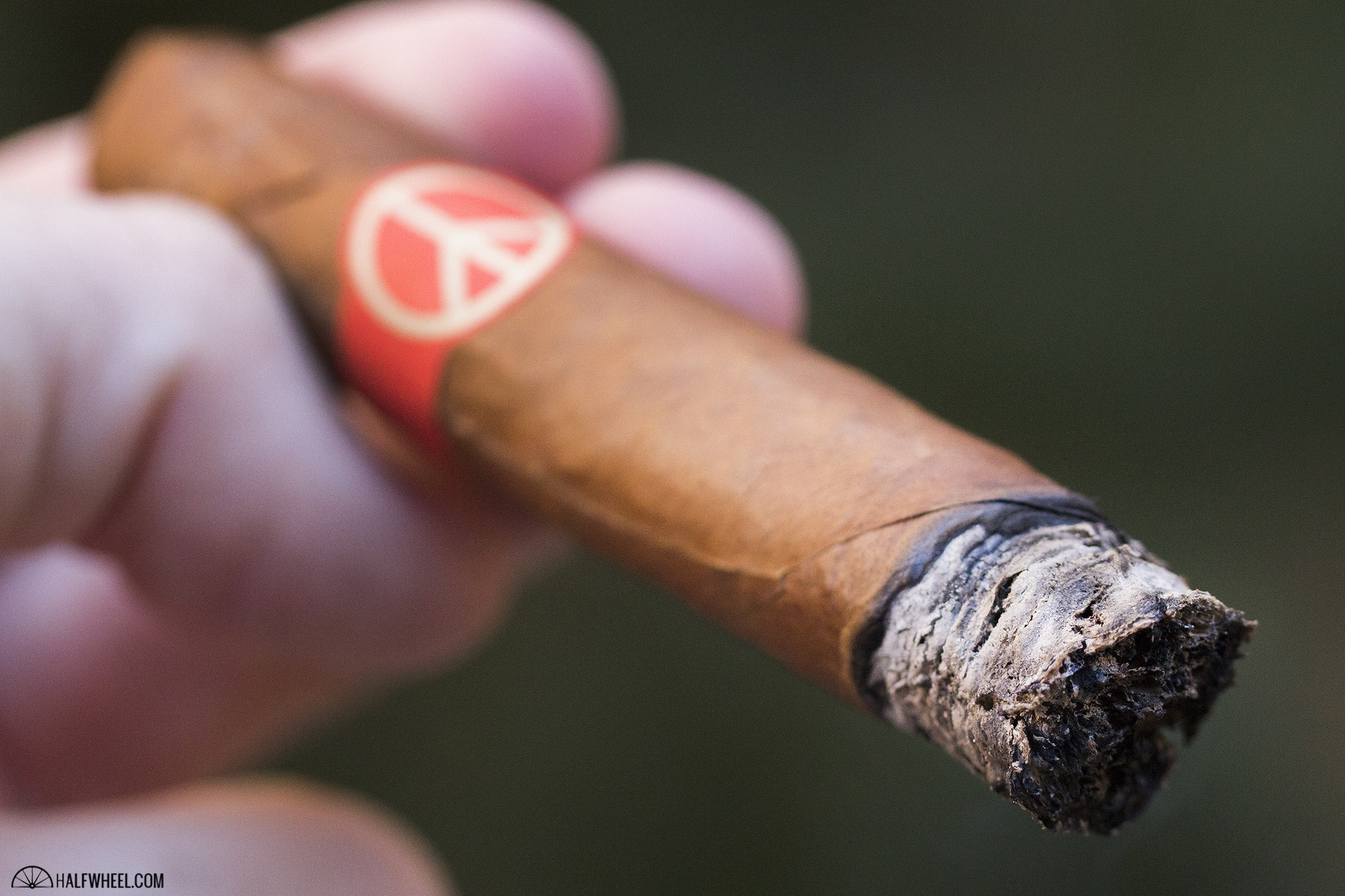 The final third is by far the most vibrant of the three, which can be both good and not-so-good depending on the puff. The dry, wood-forward profile that closed out the second third continues largely into and through the final third, thought the pepper steps back just a bit, which isn’t saying much since it was only a minor contributor at its most prominent. There’s a bit of bite from the cigar at times, not particularly sour or young, just a bit off. As such, the familiar flavors fade away and other than a bit of cedar it becomes harder to pin down exactly what I’m tasting. It’s fairly light-bodied on the palate with some vibrance and very little in the way of nicotine strength. Once it’s time for the band to come off, there’s a bit of chalk joining a  bottom-of-the-bowl Frosted Flakes and milk combination, without overt sweetness however. That hangs around for a minute before there’s newfound earthiness, more vibrant woods, and an interesting top of the throat bite. It’s a barrage of flavors that have me struggling to keep up with identifying them, let alone putting them into words, as if the cigar has been holding everything in only to release it in the final ten minutes or so of smoking time. The finish is in the medium to medium-plus range, by far the most vibrant the cigar has been yet, with a bit of strength finally showing through and fantastic construction to close things out. Let’s get the inevitable question out of the way: how does this compare to the new OneOff? It’s not even a fair question given the age and differences in the blend, though there are some similarities in the wood and pepper flavors, with sweetness and the difference between toast and bread being the things that stand out most. There’s a lot going on that age would seem to account for, and though it’s far from skeletal in terms of flavor, it does feel like there might be some nuances that have been lost to time. Construction was fantastic, with no draw or burn problems whatsoever. Getting to smoke two of these cigars again—something I likely never thought I’d do—was a real treat, and even though the experience wasn’t as magnificent as I recall, it was still plenty good enough to be enjoyable.