On March 24, New Hampshire-based retailer Tobacco Haven announced an exclusive release for the store. Named Leroy VS Dark Master, it’s a collaboration between Edgar Hoill’s EH Cigars and Christian Eiroa of CLE. Each created separate blends which are in packaged in coffins of two, five coffins in each box. The art on the heavily designed boxes is designed by Edgar Hoill and also features artwork by the tattoo artist ESPI. 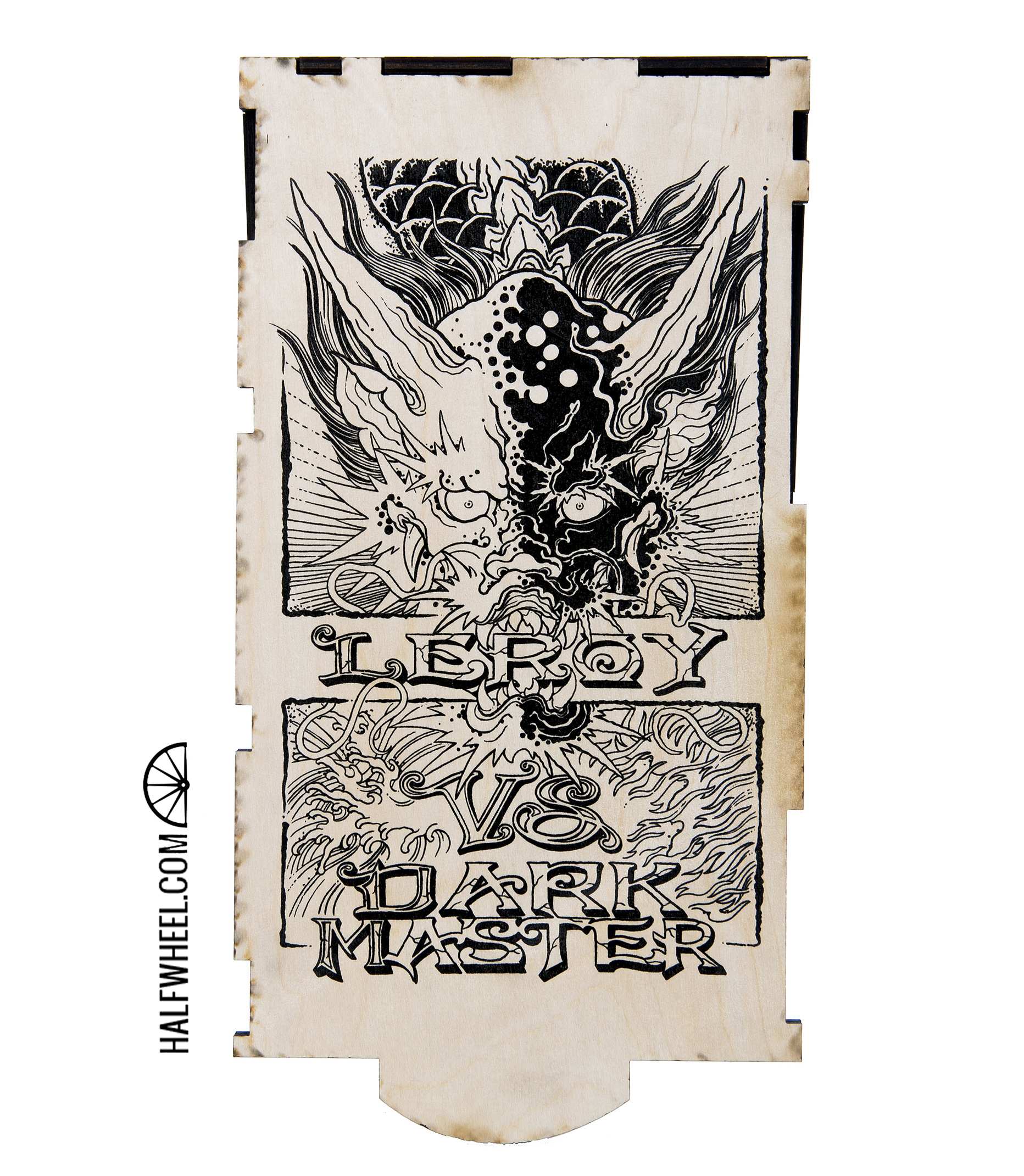 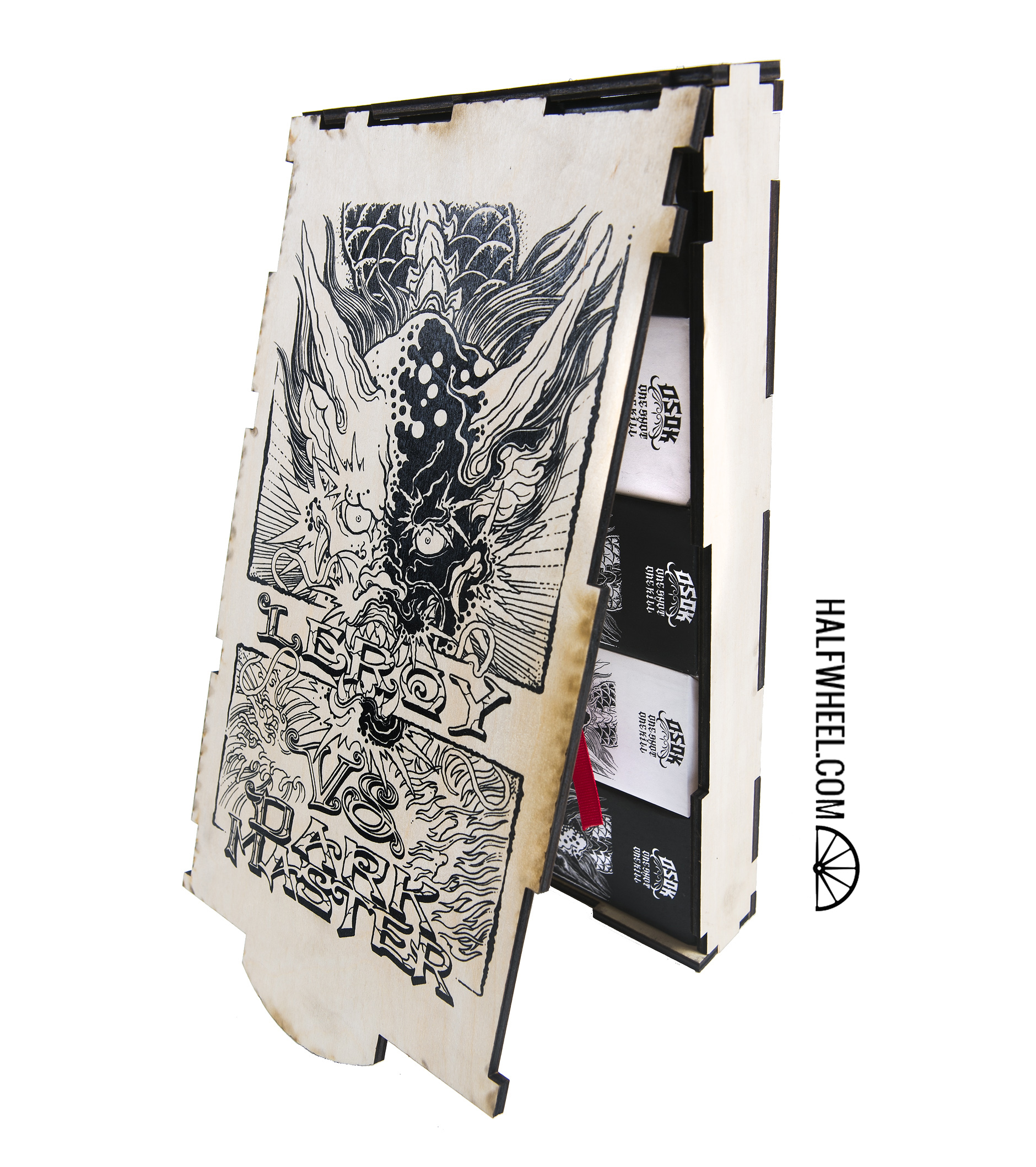 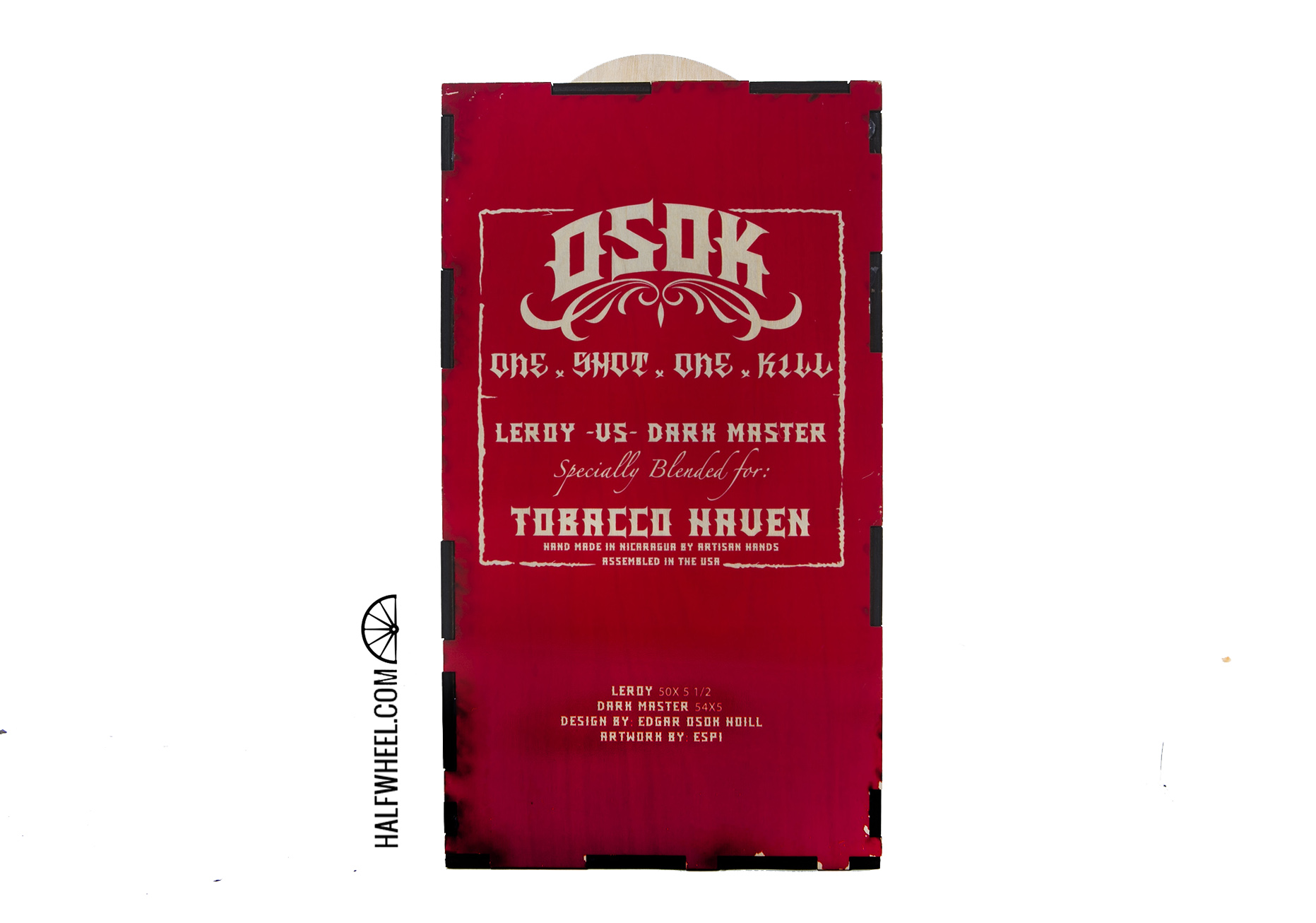 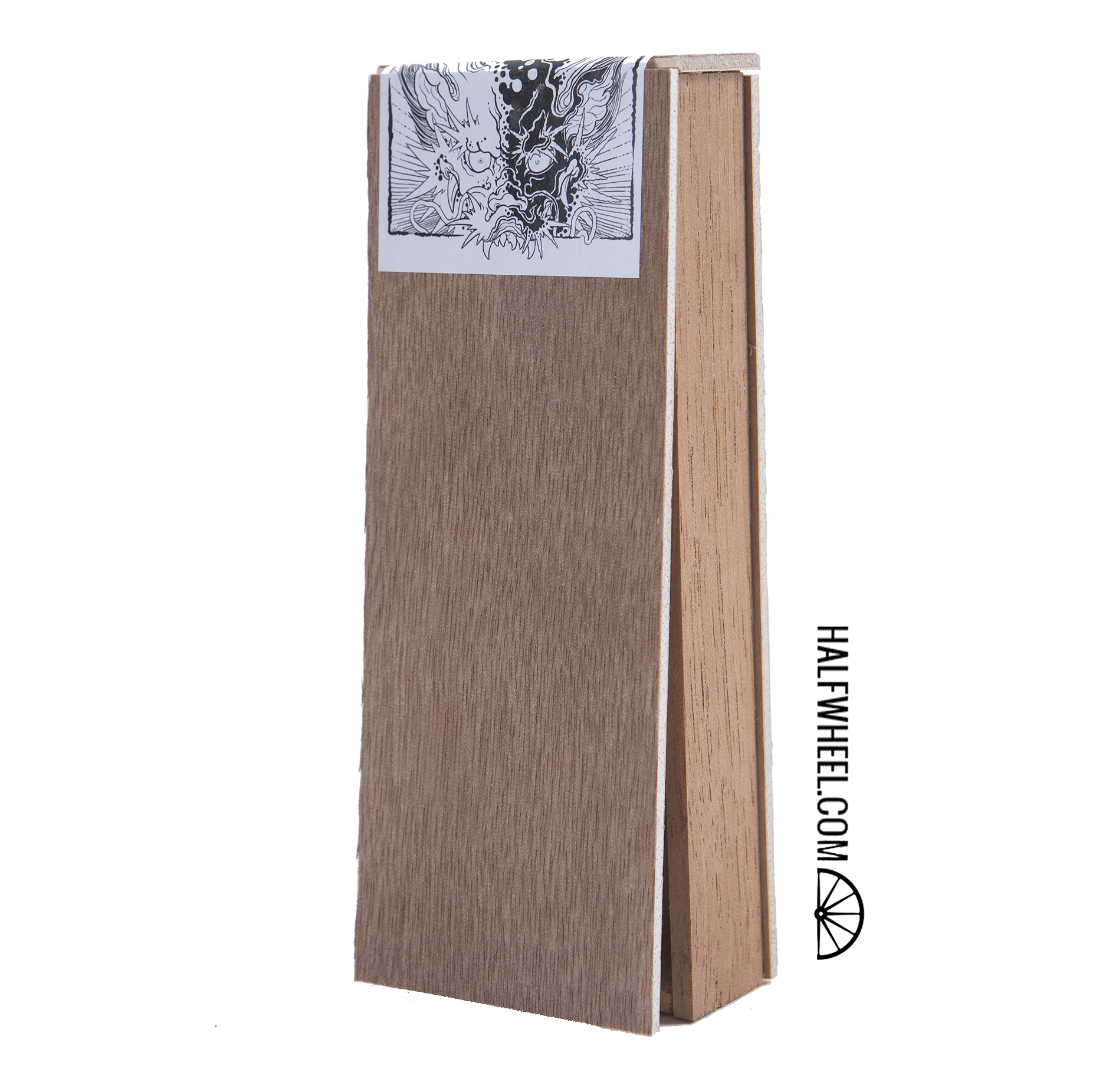 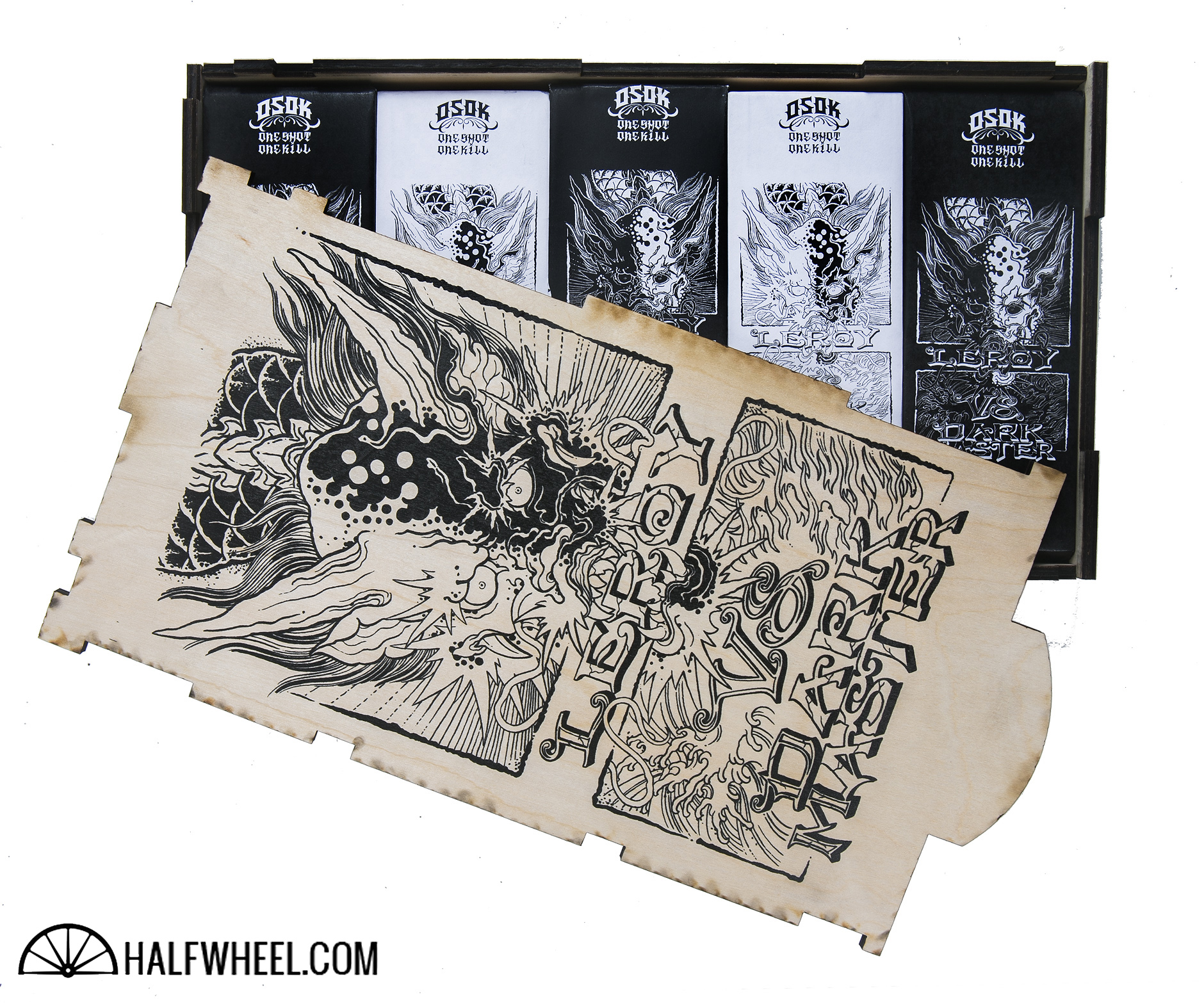 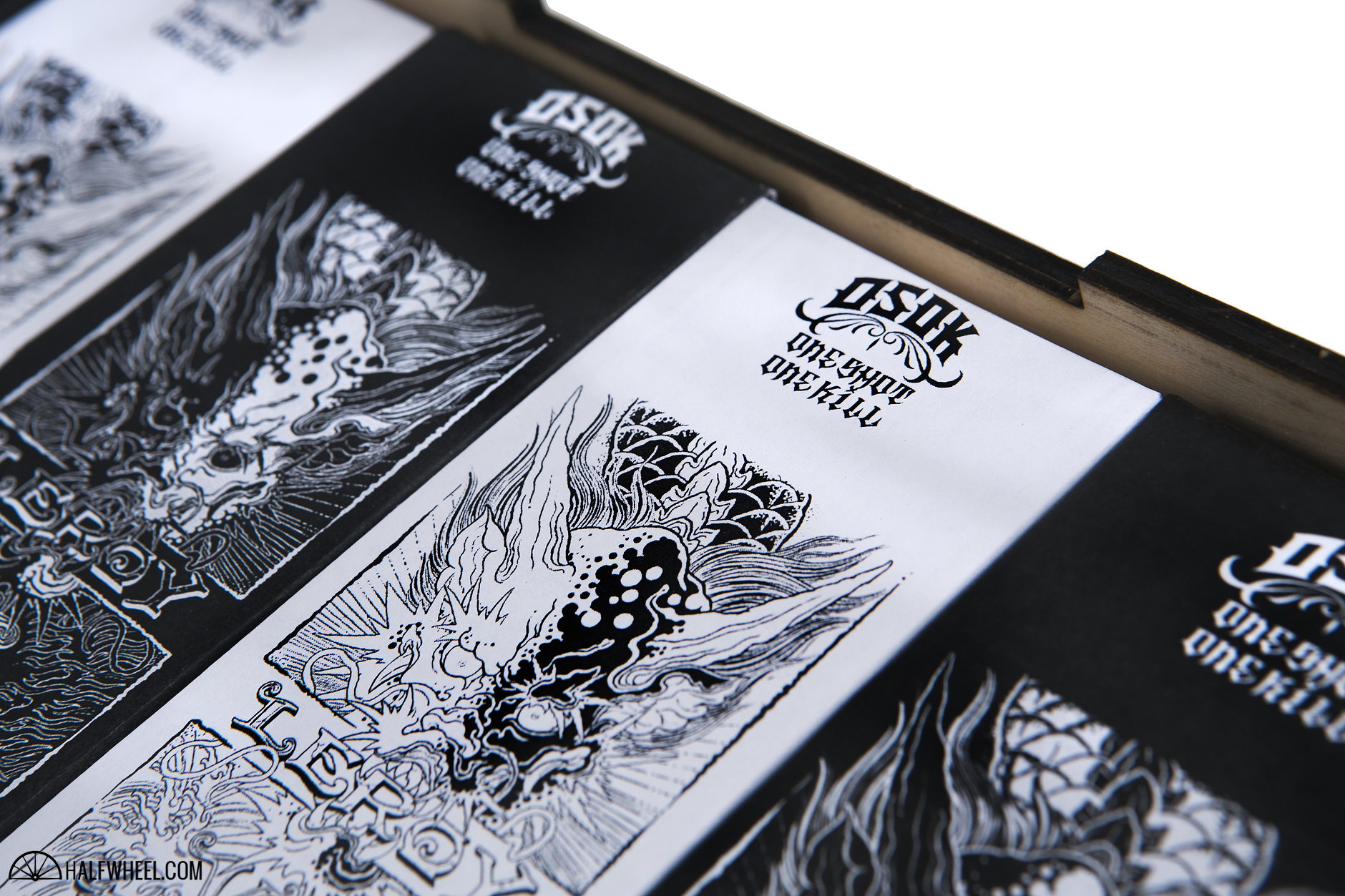 For his cigar, Hoill chose an exclusive 5 1/2 x 50 vitola in the OSOK blend named Leroy. Meanwhile, Eiroa crated a completely new blend in the form of a 5 x 54 shaggy foot. Each box has an MSRP of $119.99 with each coffin retailing for $24.99. Hoill attended the launch event on April 25 at Tobacco Haven, which also featured an installation of some of his personal photography art. The Tobacco Haven blog has some more information about the release:

Everything that Edgar did he did for a reason. The black and white wrapping paper symbolizing the ying and yang symbols as well as the smooth outer boxes with the rough cut coffin boxes inside. The red ribbon inside I also learned was chosen as red symbolizes “good luck” in Japanese.

In addition, the following text is being used to describe the project: The Dark Master is quite rustic looking, especially when you throw in the fact that it comes sans band and with a brushed foot. The dark chocolate brown wrapper is silky smooth to the touch and slick with oil, although there are plenty of veins noticeable. Resistance when squeezed is excellent with just the right amount of give, and it actually feels a bit heavy for a cigar this size. Aroma from the wrapper is a combination of very strong barnyard, dark fruit sweetness, oak and some black pepper.

The Dark Master starts off with fairly generic flavors of oak, leather, earth and black pepper until the burn hits the wrapper, when the profile expands with some other flavors of sweet nutmeg, dark chocolate, espresso and slight anise. The fruity sweetness has carried over from the scent of the wrapper, and reminds me strongly of cherries, and there is some very nicely integrated black pepper on the retrohale that stays at a pretty consistent level throughout the first third. Construction-wise, the draw is wonderful, and while the burn is noticeably wavy, that is not usual when you are talking about a brushed foot on a cigar. The overall strength is fairly mild ending the first third just below the medium mark, and does not seem to be going anywhere fast. There is an interesting metallic note on the finish starting around the start of the second third of the Dark Master, although it is more of a compliment than a detriment at this point in the profile. The cherry sweetness from the first third has decreased as well, although it is still noticeable. The dominant flavor is a creamy oak interspersed with dark chocolate, earth, leather and coffee, along with more black pepper and that same slight anise note on the retrohale. The draw continues to impress, and while the burn has evened up a bit, it is still a bit wavy at points. The smoke production has increased in an obvious way, and while the strength has increased as well, it is still seemingly stuck at a solid medium by the end of the second third. The final third of the Dark Master sees a return of the cherry sweetness to levels seen at the beginning of the smoke, along with a sizable decrease in the metallic note on the finish. The other flavors in the profile remain fairly consistent with the second third: leather, creamy oak, espresso, dark chocolate and earth. The anise note from the first two thirds is long gone, but the black pepper on the retrohale stays constant until the end of the cigar. The draw is still wonderful, and the burn actually continues to get better and better as it burns down. Strength-wise, the Dark Master breaks past the medium mark, but just barely, and really never threatened the full mark at any point during the smoke. Leave a comment to win a coffin of Leroy VS Dark Master.

Profile-wise, the Dark Master is quite enjoyable—albeit not extremely complex—with an intermittent cherry sweetness that is fairly strong at certain points. Construction was excellent overall, although one of the samples did need to be touched up more than the other two I smoked. There is no doubt the Dark Master is quite expensive, but as a limited edition smoke that includes some amazing original artwork on the boxes, I think they hit their mark quite well.