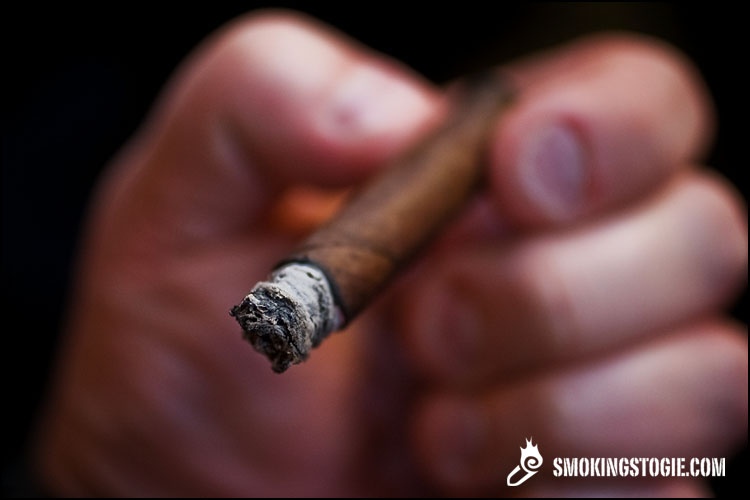 I found out through some of the forums online about a very limited Tatuaje stick being sold over at New Havana Cigars, the Tatuaje Petit Reserva, which uses the same Connecticut Broadleaf wrapper as a few of Tatuaje’s other limited sticks. They run about $3.15 a stick (in boxes of 50), and the rumor is that there were only 40 boxes made.

It is a extremely small stick sans band at 4 1/2 Inches and a RG of 32, about twice the total size of a cigarette, and the wrapper is a very nice dark reddish brown with a smell of cinnamon and tobacco. My prelight draw tasted of spearmint, and after lighting up, the draw was a little tight.

As with almost every other Tatuaje, there was a spice kick right off the bat from the first draw, but it was a bit less than other Tatuajes, either due to the size or the blend, I don’t know. Dominant flavors for the stick were a strong leather, cedar and pepper. I finished mine in 35 minutes flat, and it never got harsh at the end, even when I burned my fingers on the nub…

Surprisingly to me, for it’s size, this is a VERY strong cigar (but not overwhelming), and while I did not feel woozy or anything, I definitely felt the effects.

I actually liked this cigar quite a bit, and it is a very different taste profile to my other favorite short stick—the Work of Art Maduro—and I will be keeping a box on hand, for when I want a very nice kick in a short smoke.