When the original five vitola Melanio line was introduced at the IPCPR Convention & Trade Show in 2012, it was the first new release from Oliva cigars in five years. It was named after Melanio Oliva, who was the patriarch of the Oliva family and first grew tobacco in Pinar Del Rio, Cuba in 1886. He was also instrumental in helping the Oliva family find suitable ground in Nicaragua for growing tobacco after they moved to that country.

Just one year later in 2013, Oliva showed off a brand new variant of that original blend that incorporated a Mexican San Andrés maduro wrapper covering a Nicaraguan binder and filler as opposed to the original Serie V Melanio line, which is made up of an Ecuadorian Sumatra wrapper covering the same binder and filler. Appropriately named Serie V Melanio Maduro, the new release debuted in one vitola—a 6 1/2 x 52 Box-Pressed Torpedo—and two more sizes were added to the line in April 2014.

Fast forward more than five years to November 2019, when a brand new vitola was announced for the line, a 6 1/2 x 52 double tapered and box-pressed Figurado being produced at the newly remodeled TABOLISA 1 factory in Estelí, Nicaragua. While final production numbers have not been released, the first batch of the Figurados consisted of 70,000 total cigars packaged in boxes of 10 cigars, with each cigar retailing for $15.07. However, the company has not committed to whether or not more will be produced after the initial run. 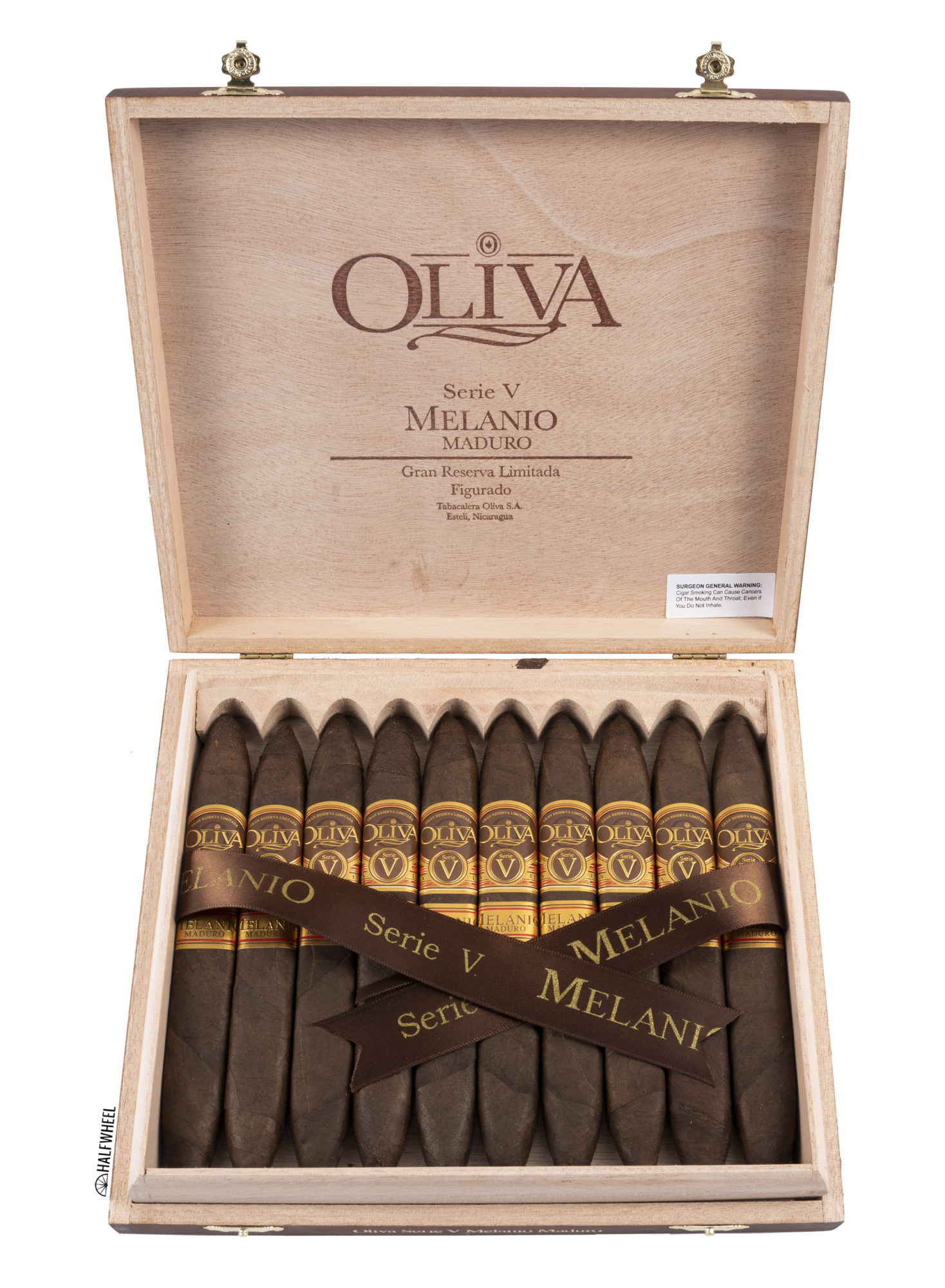 There have now been four different releases in the Serie V Melanio Maduro line: As is the case with just about every Melanio Maduro I have seen, the Figurado is an extremely visually attractive cigar, with a reddish tinted dark brown wrapper that has some tooth to it, albeit no raised veins at all. The box-press is as evident as it is well-done, and the cigar is slightly spongy when squeezed. The aroma from the wrapper is a combination of strong dark chocolate, earth, leather tack, hay, barnyard and peanut shells, while the cold draw brings flavors of sweet leather, aged oak, cocoa nibs, freshly roasted coffee beans, black pepper and a surprising amount of spice on my tongue.

The flavors start off heavy and distinct immediately after lighting the foot of the Melanio Maduro, with a combination of toasted bread and sweet leather taking the top spots, followed closely by notes of bitter dark chocolate, espresso beans, earth, peanuts, hay and baker’s spices. There is a really nice toffee sweetness on the retrohale that combines nicely with some black pepper that is also present, as well as some fairly aggressive spice on my tongue. In terms of construction, the draw is a bit tight—although that is not exactly unusual for a figurado vitola, at least until after the burn line moves into the main part of the cigar—but the burn is excellent so far and there is plenty of dense, white smoke. The overall strength is noticeable early on and hits a point just under the medium mark by the time the first third comes to an end.

Although the toasted bread and sweet leather flavors easily remain dominant during the second third of the Oliva Melanio Maduro, a sweetish floral note becomes noticeable in the profile just before the halfway point. Lesser flavors include creamy oak, freshly roasted espresso beans, bitter dark chocolate, hay, peanut butter and gritty earth, and while the black pepper and toffee sweetness on the retrohale have both increased slightly, the spice on my tongue has decreased just a bit. Construction-wise, the burn is still extremely straight and the draw is as excellent as it was in the first third, while the overall strength has increased noticeably, easily hitting a solid medium by the end of the second third. While there are not many major changes to the profile of the Gran Reserva Limitada Figurado in the final third, both the toffee sweetness and black pepper on the retrohale have increased in strength, although the spice on my tongue has disappeared. Dominant flavors still include both toasted bread and leather, followed closely by notes of espresso beans, cocoa nibs, grass, oak, almonds, tea leaves and a touch of milk chocolate. Finally, although the burn becomes mildly problematic enough to need correcting once, the draw remains excellent, and the overall strength ends up stalling out just above the medium mark by the time I put the nub down with a little more than an inch left to go. I have always felt the Oliva Melanio Maduro—and the Melanio it is based on—to be classic blends for one main reason: because they are both good. Full of distinct toasted bread, leather, nuts and a surprising amount of floral and toffee sweetness, this cigar easily transitions from third to third, never coming close to becoming boring despite its close to two hour smoking time. Yes, the spice and pepper—on the palate and retrohale respectively—can get a bit overwhelming at points, but there is always plenty of floral and toffee sweetness to bring it back down to earth. Throw in overall very good construction, and those who are looking for a very well-blended, well-balanced two-hour smoke have a new cigar to enjoy.