In December 2014, Alliance Cigar released the third in what now encompasses four different exclusive cigars under the DeSocio moniker, which was named after company owner Tom Sullivan’s maternal grandmother. Measuring 6 1/2 x 54, the new box-pressed Oliva Serie V Melanio DeSocio shared the same blend with the other cigars in the line: an Ecuadorian sumatra wrapper covering binder and filler tobaccos from Nicaragua. Limited to just 5,000 cigars, the new vitola was sold in boxes of 10 with an MSRP of $12 each.

So far, there have been four different DeSocio releases. 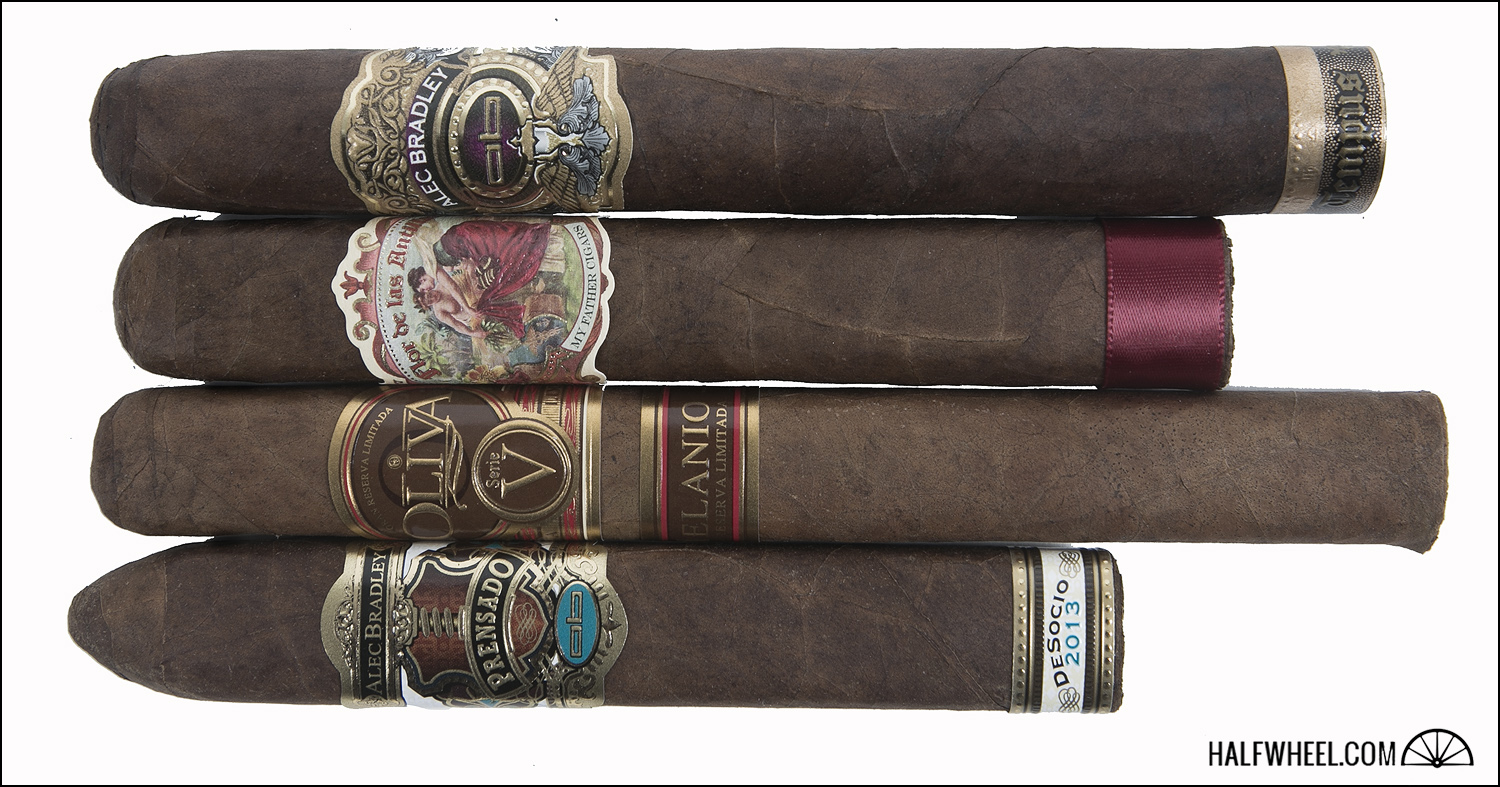 Here is what I said in my original review back in January 2014:

The cigar for this redux review of the Oliva Serie V Melanio DeSocio came from the same box as the cigars for the original review, and as a result, they are quite similar visually, with a mottled milk chocolate brown wrapper that is extremely smooth to the touch, and almost a complete lack of oil. The box press is very obvious from the first glance, but it is somewhere between a soft press and a sharp box press, and the cigar is quite spongy when squeezed. Aroma from the wrapper is a combination of strong dark chocolate, manure, earth, ground coffee, creamy oak and leather, while the cold draw brings distinct flavors of peanuts, hay, barnyard, cedar, dark chocolate and sweet nutmeg.

Starting out, the Oliva Serie V Melanio DeSocio features an almost shocking amount of maple syrup sweetness, both on the retrohale and the finish, interspersed with other notes of creamy cedar, peanuts, espresso beans, earth and yeasty bread. There is a wonderful amount of pepper on the retrohale along with a touch of spice on my tongue, although both start to lose strength after the first third draws to a close. The sweetness in the blend begins to recede noticeably after the cigar reaches the halfway point, but it is still strong enough to be a major player in the overall profile. Other flavors of dark cocoa, creamy cedar, leather, peanut butter, cinnamon and hay flit in and out, and while the spice disappears totally around the start of the final third, the black pepper on the retrohale remains noticeable until I put the nub down with a little more than an inch left. 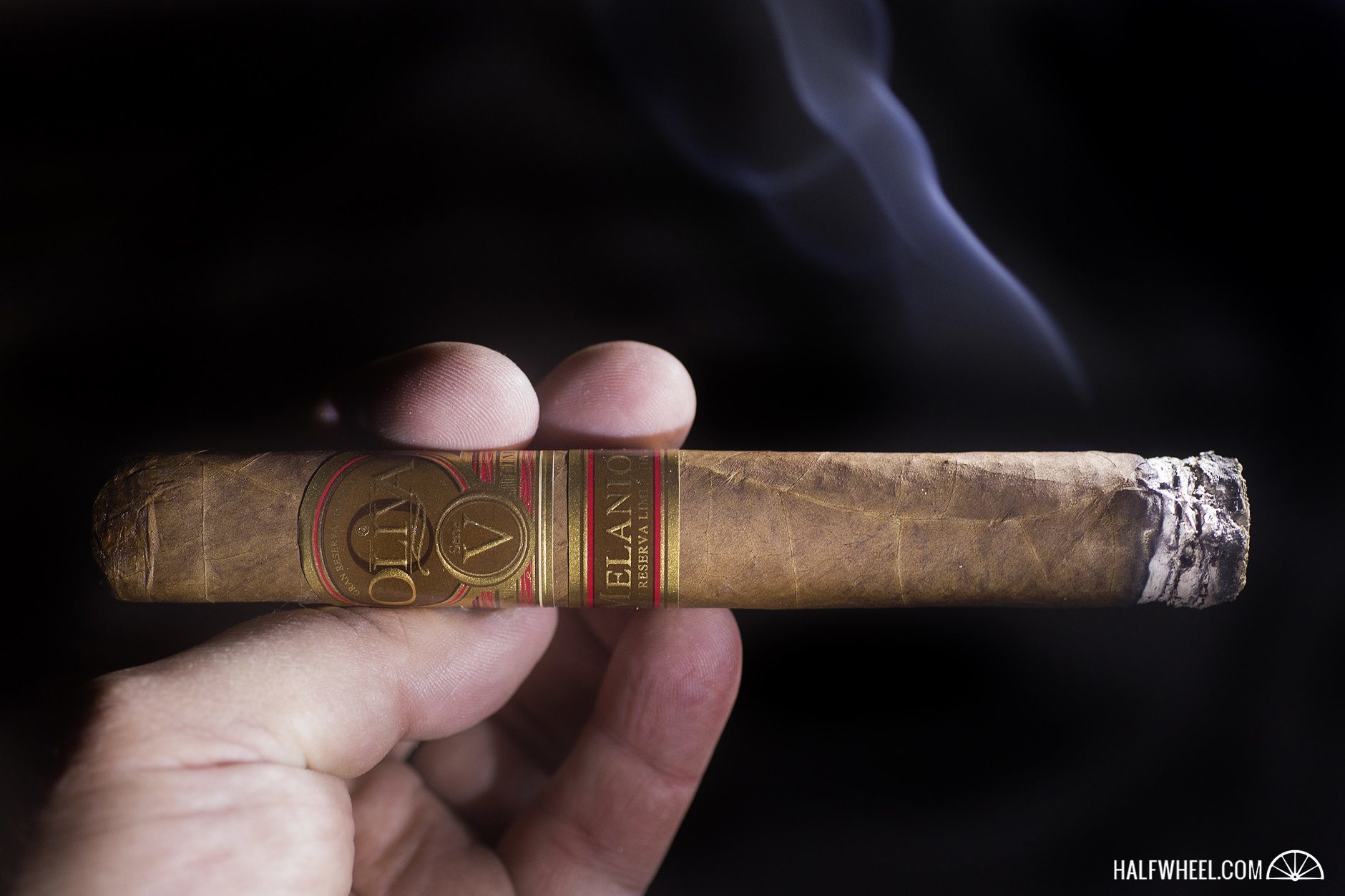 Construction-wise, the Oliva Serie V Melanio DeSocio feaures and excellent resistance on the draw, and while the burn was not quite razor sharp, I did not have to touch it up at any point at all. Smoke production was quite dense, flowing from the foot like a house on fire. The overall strength is extremely well integrated, hitting a solid medium mark by the start of the final third before stalling out there after one hour and 50 minutes of smoking time.

I was impressed with the Oliva Serie V Melanio DeSocio the first time I smoked it and almost two years of age has only made it better. The profile is sweeter overall with the age, with a distinct maple syrup note that makes a great backbone to a rich profile that includes a strong and creamy cedar and peanut notes. Construction was excellent, and the strength was noticeable without being close to overwhelming at any point. This cigar has really aged into something wonderful, and I only wish I had more of them to smoke when I am looking for a full-flavored, medium-bodied smoke to last almost two hours.