The Oliva Serie V has been made in just about every size and shape: normal sizes, culebras, NUb, small diademas and yes, big diademas.

It was during a period of a few consecutive years where Oliva made a special size for the European market, something that seems to have fallen out of favor lately.

I reviewed the Serie V Diadema shortly before it came out and wasn’t overly impressed:

My problem with the Gran Corona (A) size, of which this falls into, is simple: I’d rather buy and smoke two different cigars for the same money and time it would take me to smoke one of these monstrosities. While the Diademas are beautiful and are great to show off in a humidor, the size quickly becomes more annoying to smoke than anything else. That aside, this was a much different flavor profile for the Serie V, and not in a good way. The classic smooth punch that allows Oliva’s long-standing flagship to be both full and easy is absent because the former falls short in the flavor category. There are no big and bold notes, nothing that makes you think richness; it’s just a mixture of above average smooth flavors with a decent amount of nicotine. While that and the easily acceptable construction might seem like enough, it’s not, not compared to the other 10-plus vitolas of Serie V.

I still remember getting my first Serie V Churchill Especials and being amazed at the great red clay color, and this cigar looks like just a large version of those. I love the subtle angles at the top and bottom of the massive cigar, it’s not a box-pressed cigar, but they sharpness of the angles make it far less round than a salomon. Aroma off the Ecuadorian wrapper has leather and Spanish cedar. The foot isn’t a ton more vibrant with similar flavors and some toasted nuts coming from the small hole at the bottom. Cold draw is a bit bizarre with a lot of herbal flavors joining the prominent Jalapa sweetness and spice that is so prominent on the Serie V.

The gigantic Serie V starts with some roasted coffee and toasty notes. There’s not a ton of smoke initially, something I’m not too concerned with given the small opening at the bottom of the cigar. Fortunately, things change pretty quick and the first third is fairly vibrant with some white bread and burnt barbecue. The retrohale has fresh almonds, nutmeg and some limoncello. Ninety minutes in and there’s an added floral flavor joining a roasted coffee, burnt cedar, harsh raspberries and some meats. At around three inches, complexity shows signs of falling off. There’s a late charge of a big bubble gum flavor and lots of popcorn on the finish, but it’s short-lived. Burnt toast, sweet cedar and a basic Guinness stout flavor make up the last two inches, which is noticeably milder than the first seven inches. 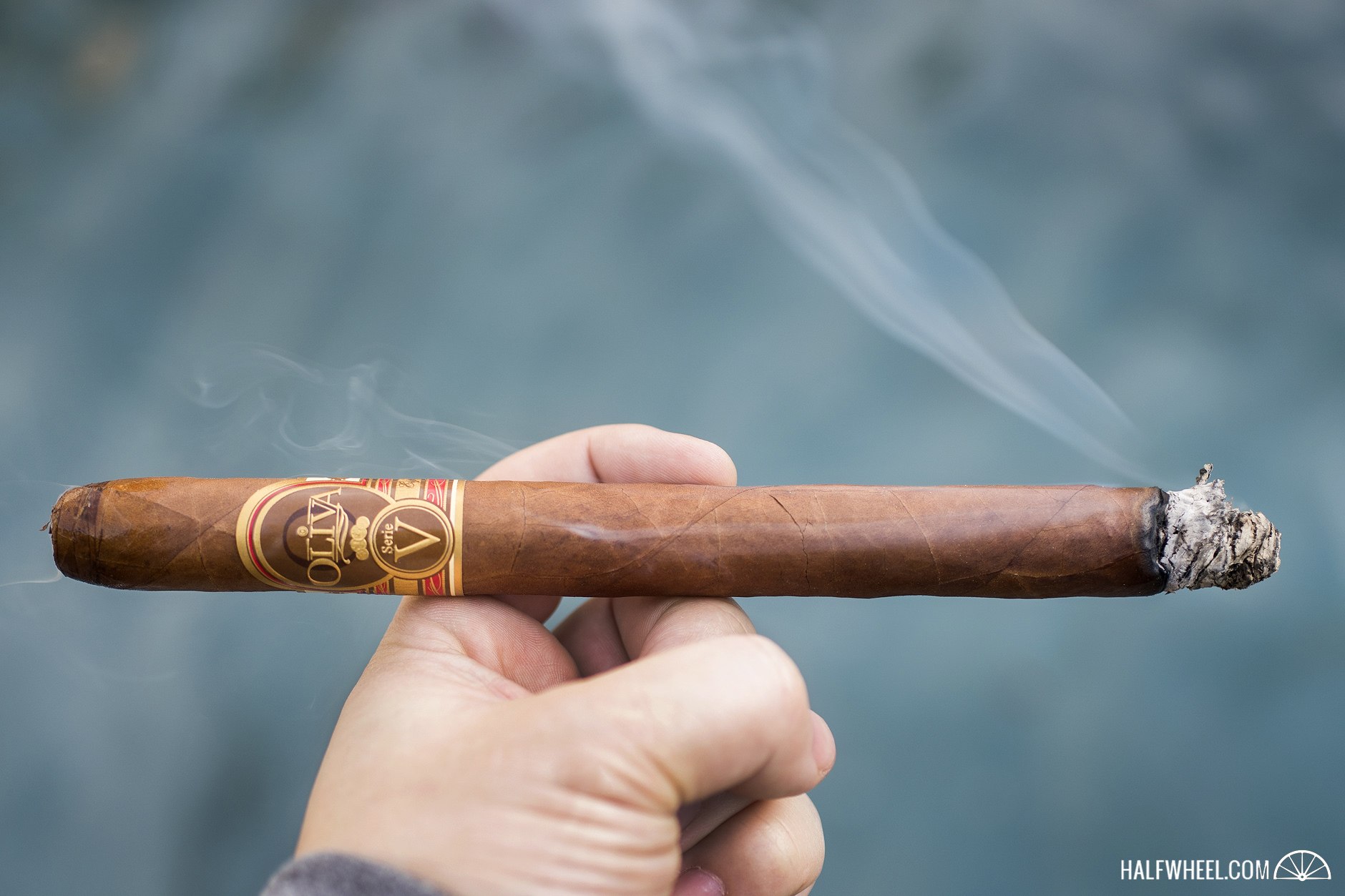 The draw starts a bit tight, but it opens up once the nipple has been burned. After that, it’s pretty much smooth sailing. There were two touch-ups throughout the three and a half hours worth of smoking, which is more than acceptable as far as I’m concerned given the length. Strength is never aggressive, more of a medium-full thud rather than a sharp punch, but that doesn’t mean I don’t feel it. By the midway point I can detect it having some effect though it’s certainly a bit milder than I expected.

The Oliva Serie V in non-Diadema form has been one of my favorite cigars. This is just a gigantic Serie V and after a few years, it’s aged extremely well. I originally wrote that it held up well, but after looking at the original review, it seems clear I was missing the typical Serie V experience when these were fresh. This time the sweet and earthy mixture was more than present, as was the typical Serie V nicotine effect. If these were regularly available, it would be a tough choice between this and my go-to regular Serie V, the Churchill Extra, as both provide the core Serie V flavors with a fair bit of complexity.