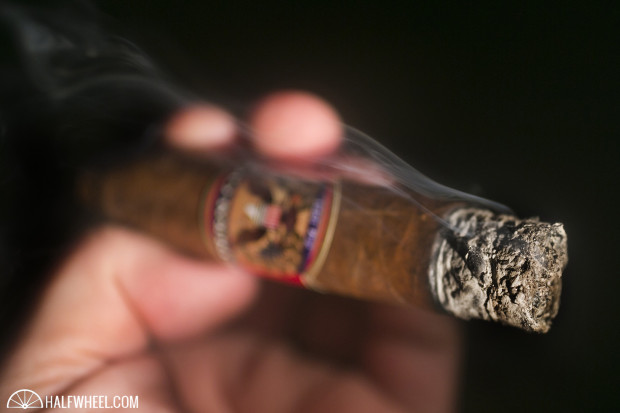 Since 2011, Federal Cigar has commemorated its anniversary by releasing custom blends and line extensions from various cigar manufactures. Earlier this month, we learned that the first—and perhaps only—anniversary release this year would by by the Oliva Cigar Company, a blend that was supposed to be used for one of their Master Blend projects before being scrapped for some reason that has either been lost to time or has not been revealed.

We published the details about the release earlier this month:

Later this month, a 6 x 52 box-pressed torpedo will leave the Oliva aging vault for New Hampshire-based Federal Cigar. The Federal Cigar 93rd Anniversary Reserve No. 2 is the latest in a growing line of limited edition exclusives for the store, although this particular cigar differs in that it was originally destined for a much different project.

“(It’s) a prototype Master Blends project that never came to fruition,” said Rick Gadway, owner of Federal Cigar. Gadway is referring to the Oliva Master Blends, the flagship line of the Oliva Cigar Co. and a series that has not undergone an update since 2006.

“About 18 months ago TABOLISA (the Oliva factory) began to reorganize their aging rooms in Nicaragua, said John Gazerro, regional manager for Oliva. “We found some pretty interesting odds and ends. There were a lot of mismatched MB1’s and MB2’s and also a few thousand torpedoes that were rolled about ten years ago.”

Gadway and Gazerro smoked the torpedo and it was agreed it would become an anniversary release for Federal Cigar.

According to Gadway the cigars were rolled in either 2003 or 2004, in between the release of the Master Blends 1 and Master Blends 2. It’s made entirely of Nicaraguan tobacco from 2001 and uses a sun grown wrapper.

It will be sold in bundles of 10 and with a Federal Cigar band. Neither Federal, nor Oliva wanted to delay the release of the cigar, so boxes were shelved. It goes on sale on March 15, the date of the annual Federal Cigar anniversary party. Pricing is set to $14 per cigar and the cigar is limited to 200 bundles of 10 cigars.

While Ernesto Perez-Carrillo Jr. of E.P. Carrillo, K.C. Johnson of L’Atelier Imports, Patricia and Raquel Quesada of Quesada Cigars and Pete Johnson of Tatuaje Cigars will all be in attendance at the event, Gadway says he currently has no plans for any additional anniversary releases. Both E.P. Carrillo and Tatuaje have produced anniversary cigars for Federal in the past.

Oliva is believed to be sitting on thousands of older Master Blends. The company has not announced its plans for the future of the series, the Master Blends 3 was introduced in 2006, the last major update to the series.

Federal Cigar is no stranger to exclusive releases and blends, having had a large number of cigars released for various anniversary starting in 2011.

For their 90th anniversary in 2011, Federal Cigar released four blends.

In 2012, two new cigars were made, as well as a release of some additional stock of the Tatuaje releases from the previous year.

Last year, three cigars were commissioned, including a new version of the Tatuaje release from 2011. 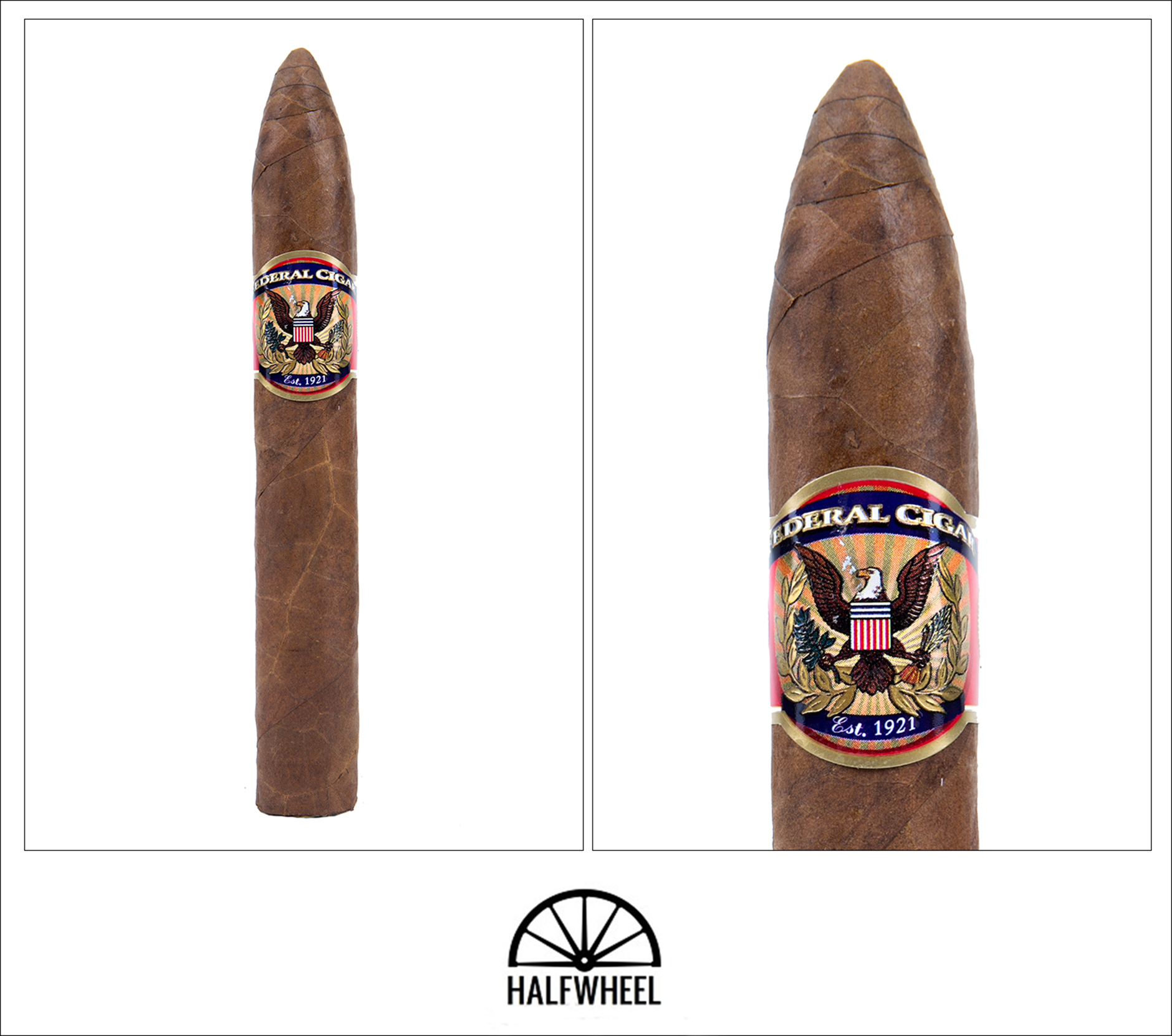 A smooth yet rustic mocha brown colored wrapper covers the Federal Cigar 93rd Anniversary Reserve No. 2, and a few veins are visible, albeit not distracting at all. While the cigar is not box-pressed, it is definitely oval-shaped, which is an interesting look when combined with the torpedo cap. There is very little give when the cigar is squeezed and the aroma coming off of the wrapper is a surprisingly strong leather and earth, along with a slight sweetness. The cold draw brings light notes of cinnamon, chocolate, earth and tobacco.

The Oliva Federal Cigar 93rd starts off with a melody of flavors right off the bat: buttery popcorn, earth, dark cocoa,  leather, cedar and espresso. An interesting caramel sweetness starts to become more and more evident as the first third continues, and it really combines well with the bready, buttery popcorn flavor, reminding me strongly of caramel drizzled popcorn you can get at any number of stores. There is also a great amount of white pepper on the retrohale that bumps up the complexity of the entire profile, although I am getting no spice at all on the lips or tongue at this point. The burn is a bit wavy, but not bad enough to correct yet, and the draw is excellent so far with a dickman cut. There is a small crack in the wrapper that develops near the burn line, but it is bad enough to think that it will become anything more than a minor annoyance that will fix itself. Smoke production is about normal, and the overall strength is fairly light, struggling to get close to the medium mark by the end of the first third. 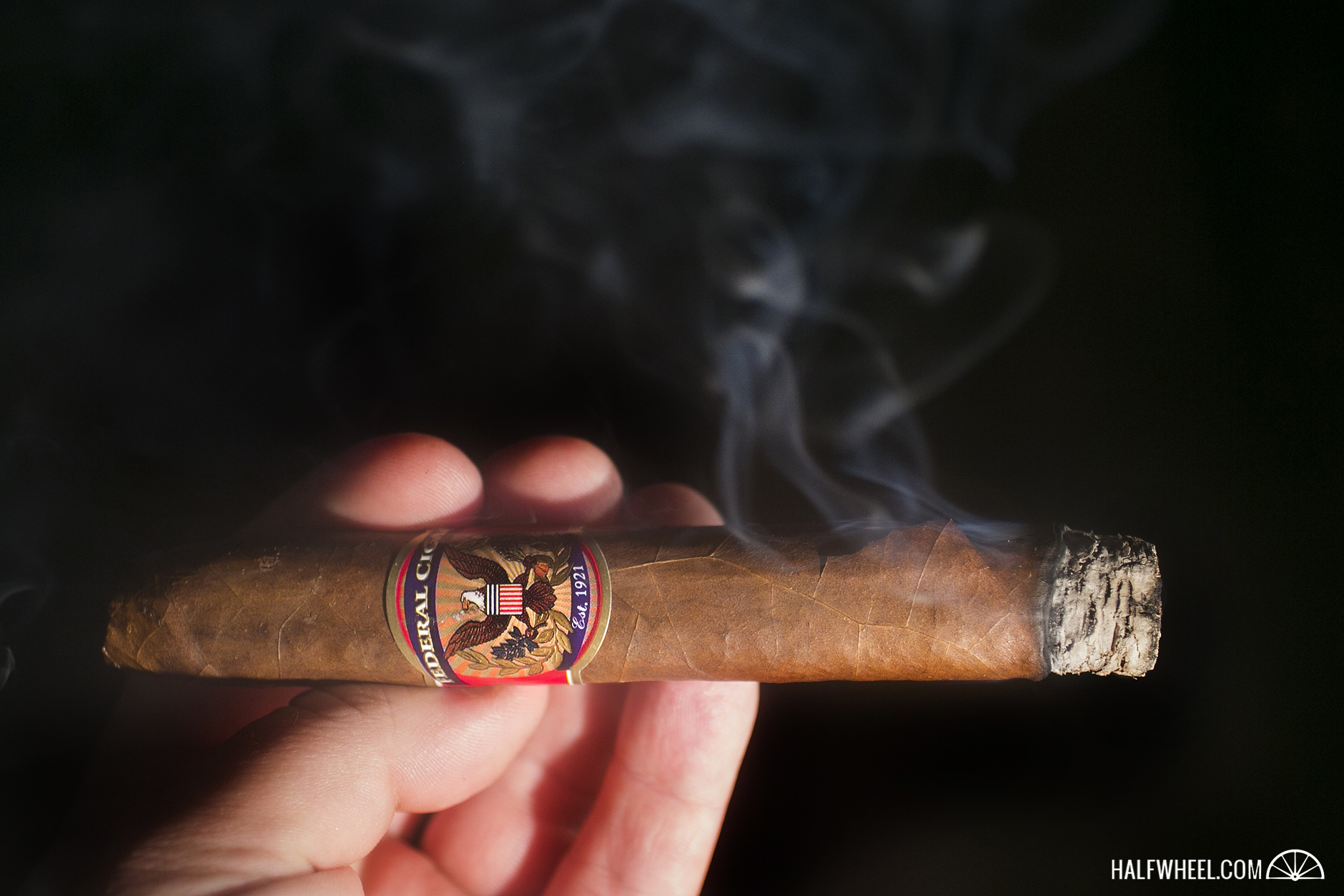 The core flavors do not change much in the second third of the Federal release, with that same buttery popcorn note dominant, and other notes of coffee, cedar, leather and dark chocolate flitting in and out. The caramel sweetness from the first third has started to shift around the halfway point, turning into more of a nutmeg sweetness that still combines quite well with the rest of the profile. I am not noticing nay significant change in the amount of white pepper on the retrohale, and that is a good thing. As I expected, the crack in the wrapper resolved itself, and the burn and draw are both now excellent, with no indication that will change before the end of the cigar. Strength-wise, the Oliva still has not reached the medium mark by the end of the second third. 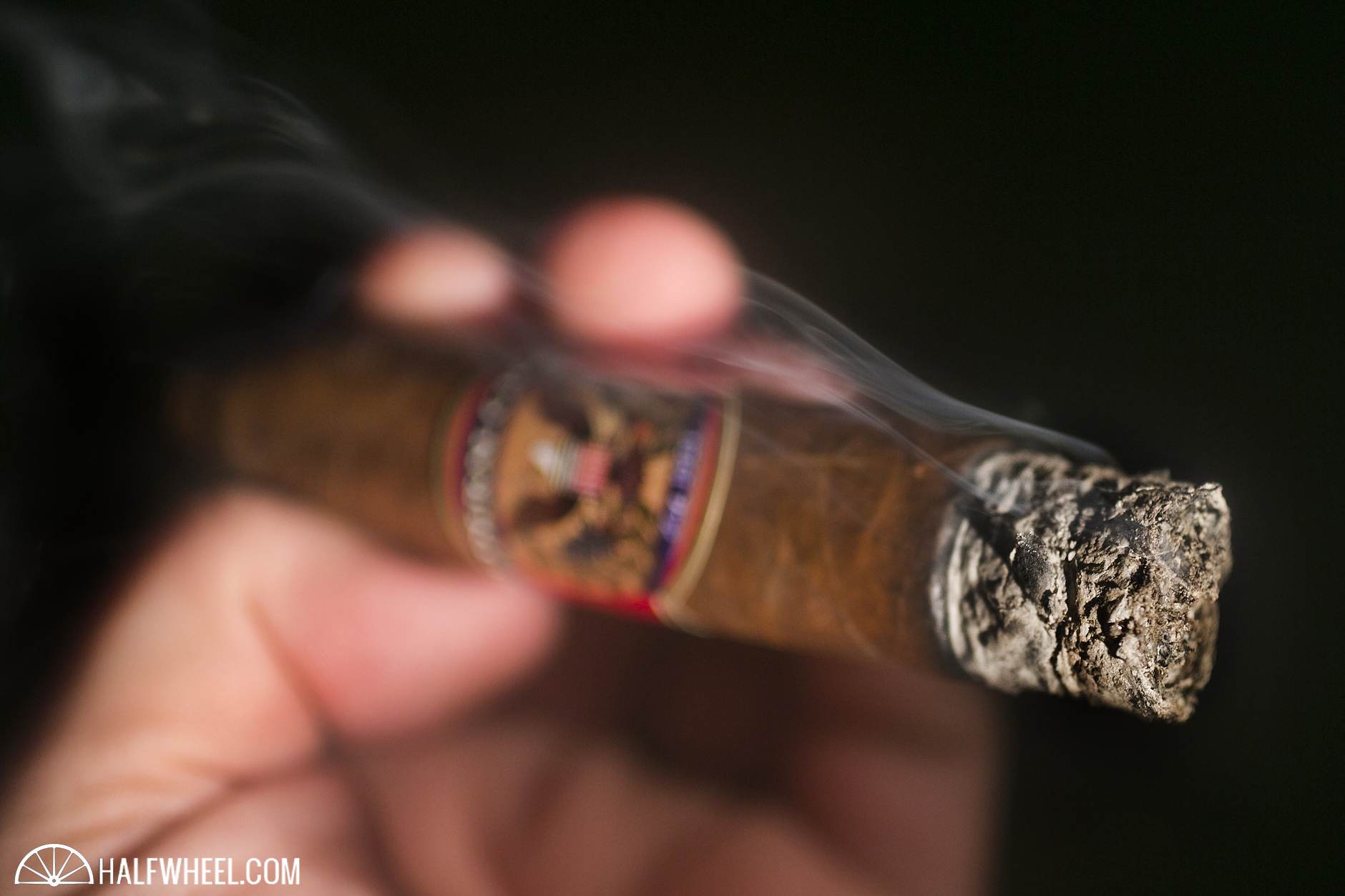 The final third of the Federal Cigar 93rd Anniversary Reserve No. 2 sees a noticeable increase in the earthiness in the profile, although the buttery popcorn note is still quite evident. Other flavors continue to fade and strengthen by the puff, including dark and slightly bitter espresso, cocoa, leather and wood. The pepper on the retrohale has diminished slightly by this point in the cigar, but is still strong enough to notice. Construction-wise, both the burn and the draw continue to impress, but the smoke production remains in the normal range. The overall strength barely makes it to the medium mark by the end of the cigar. I am able to smoke it down to slightly less than an inch left without the nub getting hot or bitter. 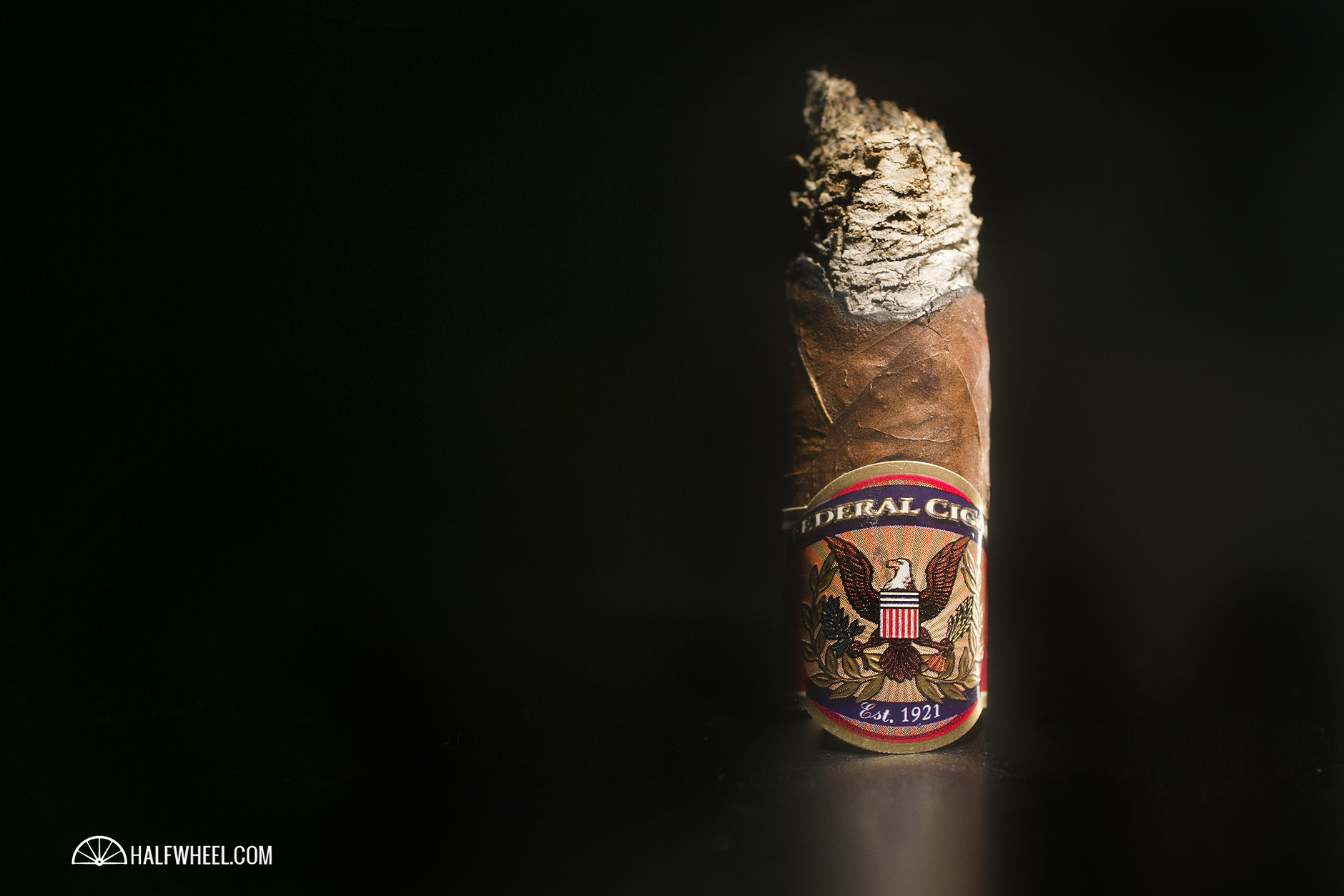 When people talk passionately about how they want to age cigars to pull the most flavor out of a blend, this is a good example of a cigar they are wishing they end up with. Although wonderfully smooth and nuanced with just right right amount of white pepper and ever changing sweetness to balance out the rest of the flavors in the profile, the Federal Cigar 93rd Anniversary Reserve No. 2 is neither a strong cigar nor an overly complex blend flavor-wise, I found myself not caring all that much as I smoked it. In fact, what it lacks in complexity it more than makes up for in overall enjoyment. Besides the last of complexity, the only downside I could see was the burn on both of the samples, one for the whole cigar, and the other for just about half of the smoke. Having said that, and although the price makes this a once in a while cigar, there is no doubt you will enjoy it when you pull it out.