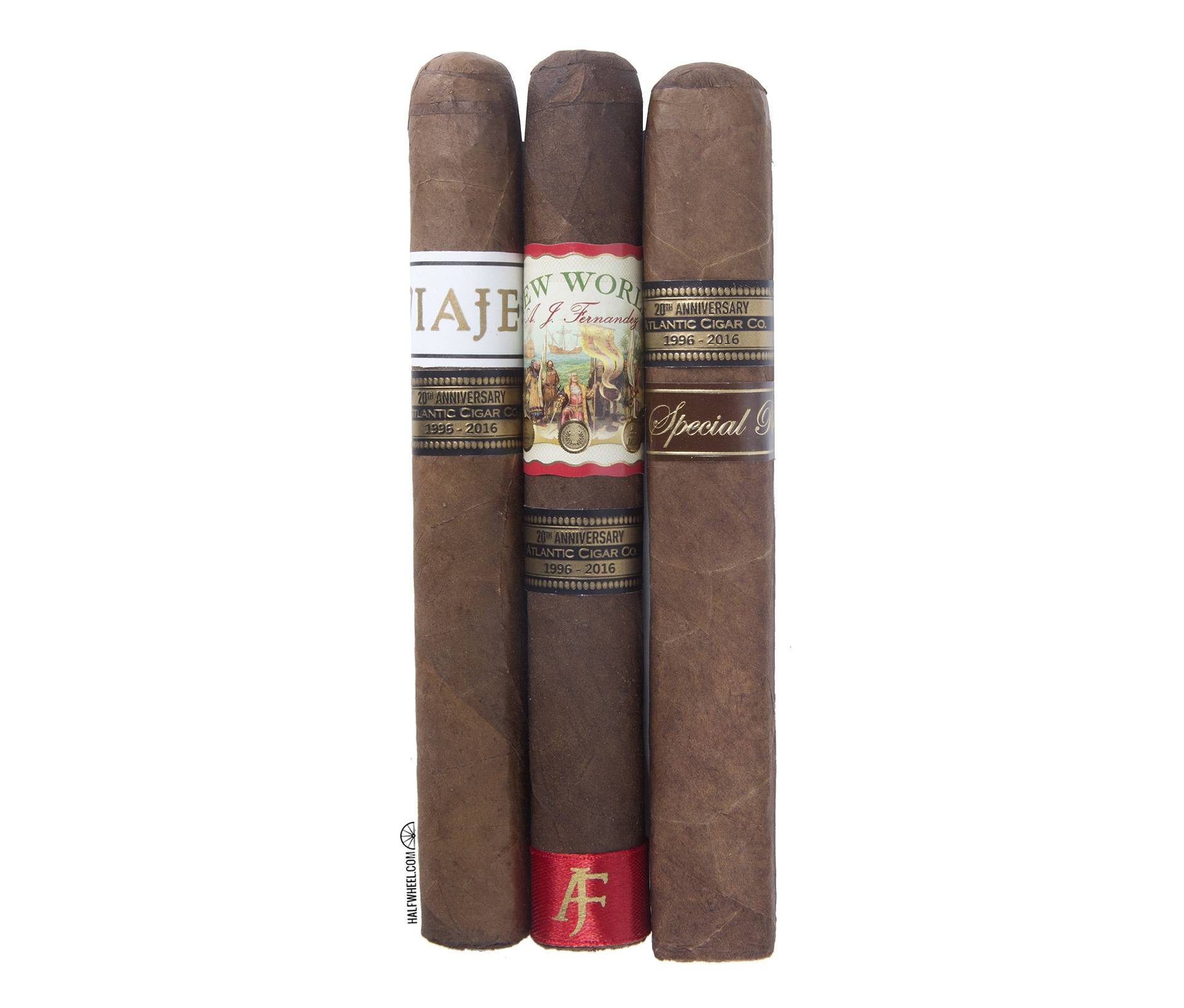 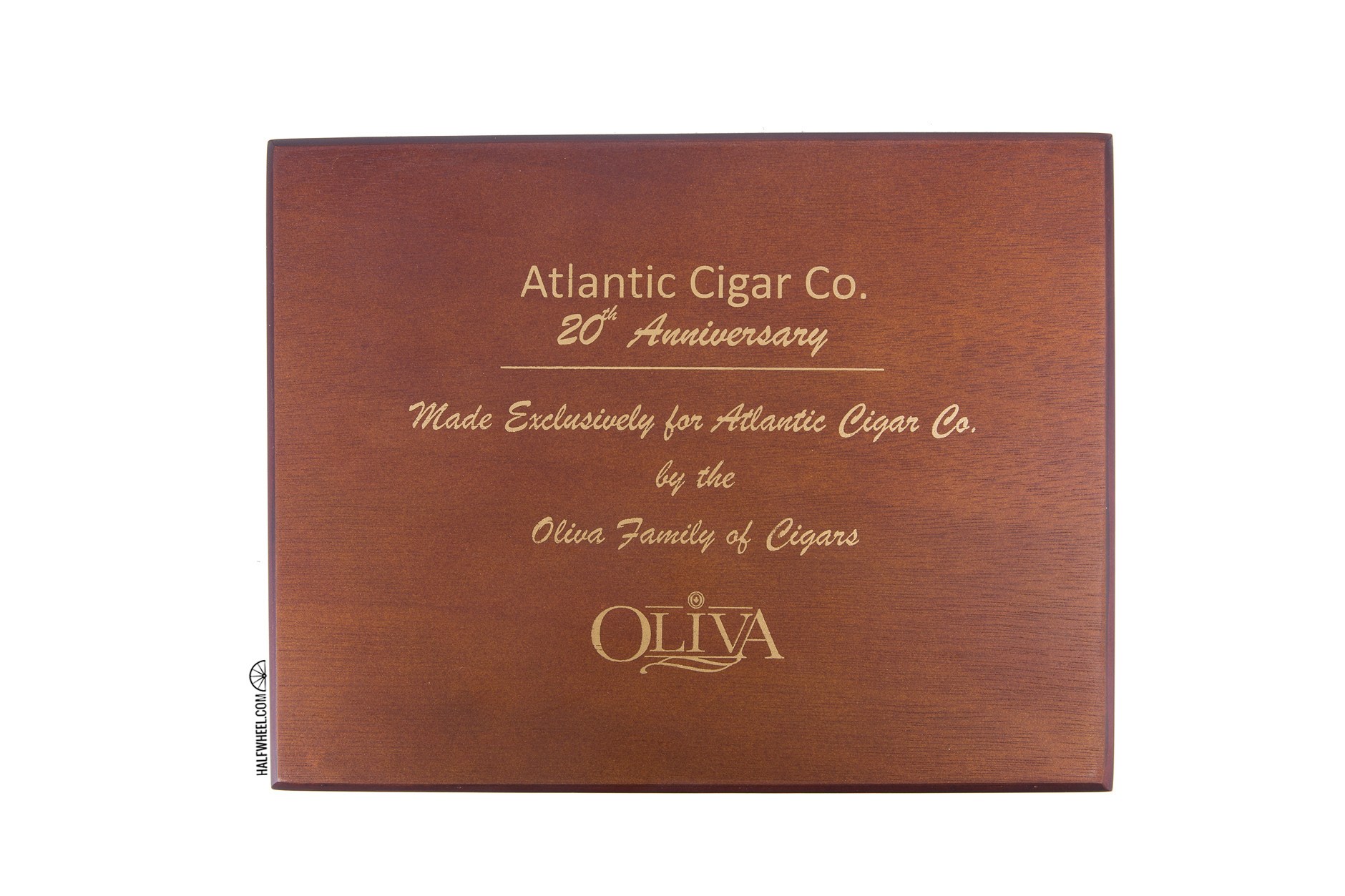 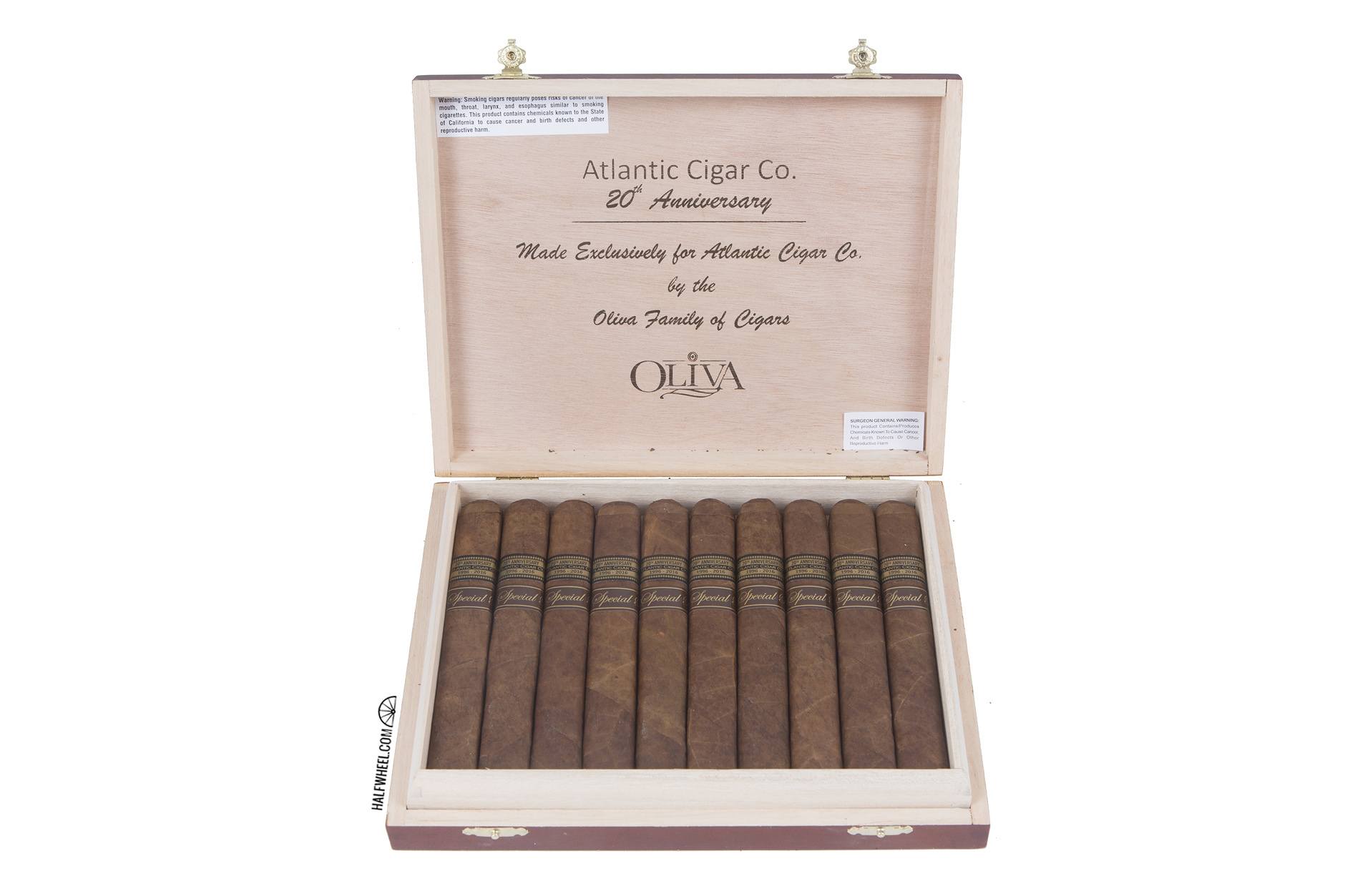 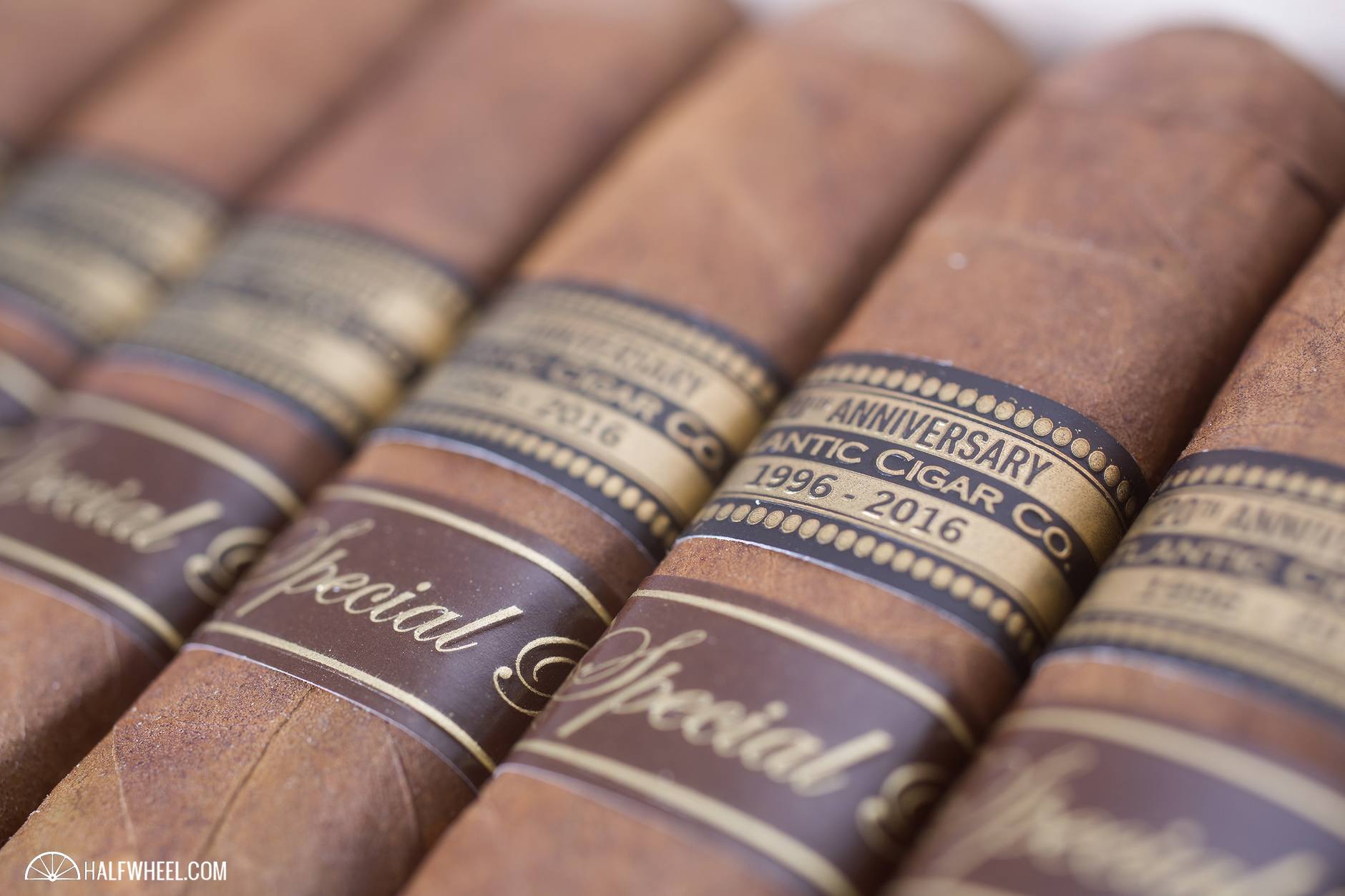 It is similar in size to the first two releases, coming in at the increasingly industry standard for single releases, 6 x 54. The blend as described as a modified Oliva Serie V Melanio, though Oliva didn’t say exactly what the tweak is, other than to call it “a slight filler ratio change in the blend.” It uses an Ecuadorian Sumatra wrapper, a Nicaraguan binder and Nicaraguan fillers, the same components used by the regular Melanio blend. The size is one not currently offered in the Oliva Serie V Melanio line. 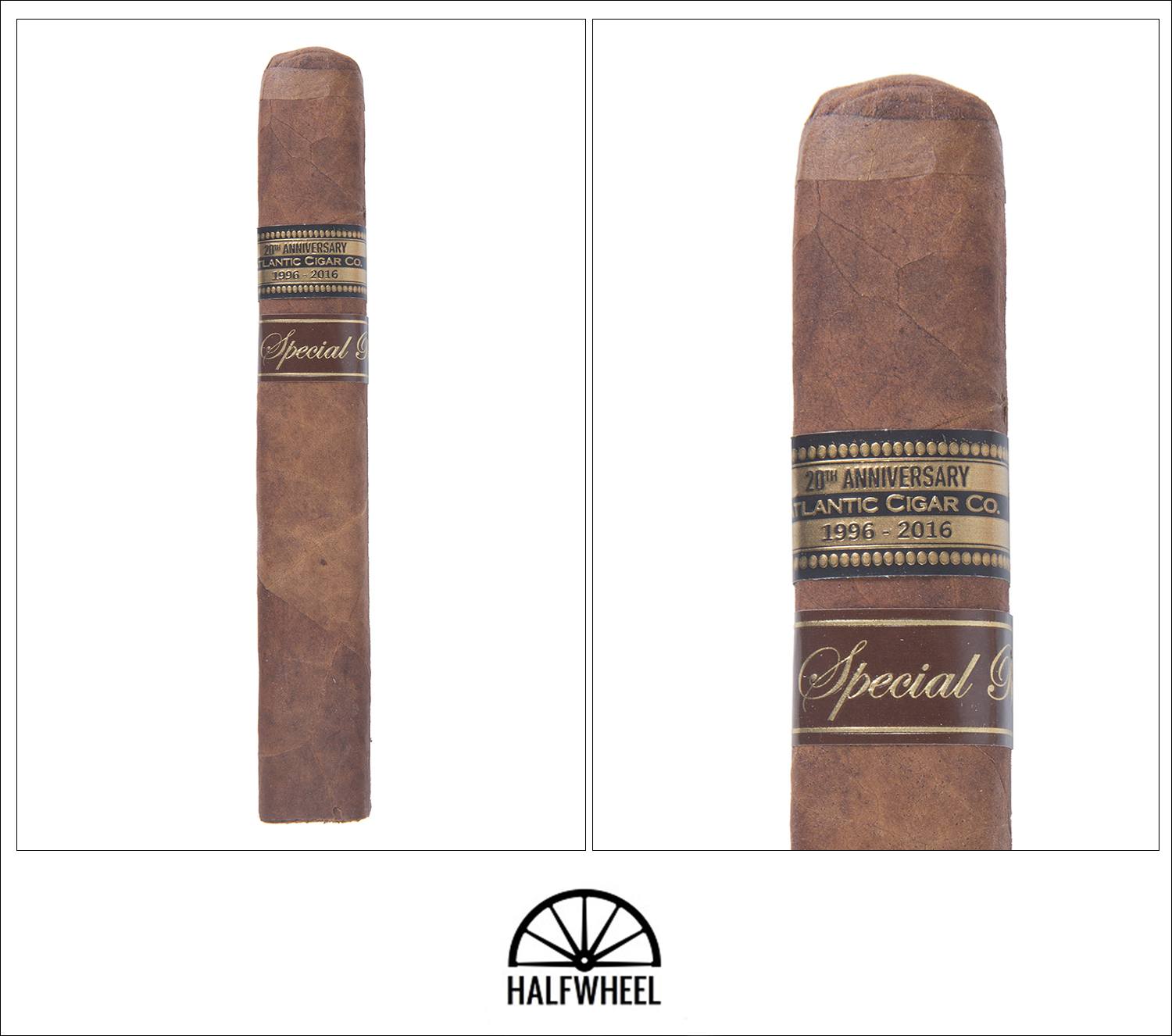 It’s box-pressed with a bit of give, about the same amount you should expect to find on such a box-pressed cigar, though it’s noticeably softer than a typical parejo that doesn’t get the press. The wrapper has a few shads of brown on it, generally falling around the midway point of the brown scale. Veins are small but plentiful and while there isn’t any prominent tooth, what appear to be some stray glue marks provide something else to look at, although they distract from the presentation. The foot offers a bright and sweet initial aroma of apricots and nectarines, with a bit of fruit cup syrup accompanying them. A few more sniffs reveal a slightly different profile that brings in firewood but not pepper, with the syrupy sweetness coating becoming the base. The cold draw is a touch loose and shows almost none of the sweetness that the foot presented; instead it is creamy and nutty, almost like a bit of hazelnut flavored coffee creamer. It doesn’t show any pepper either.

The first puffs of the Oliva Atlantic Cigar 20th Aniversario Toro are relatively unremarkable in terms of pepper of strength; for an anniversary cigar, this certainly isn’t starting off with fireworks. There’s an enjoyable cake donut base, a little bit of pepper for the palate, and a touch more for the nose. While it might not be the most dynamic start, it’s still medium to medium-plus in body and medium in strength. The first couple of retrohales are also rather mild; they’re not lacking pepper but it’s far from overpowering, providing a gentle tingle in the nostrils but absolutely no irritation. The flavor develops through the first third, and after the burn line gets to about an inch in the flavor peels back its first layer and reveals a thicker, fuller smoke. It’s still not exploding with flavors or commanding of the senses, but it is quite good and refined with plenty of balance. The technical performance has been solid through the first third; there’s no challenge to air flow which results in a good amount of smoke, while the burn line is even and the ash fairly strong. 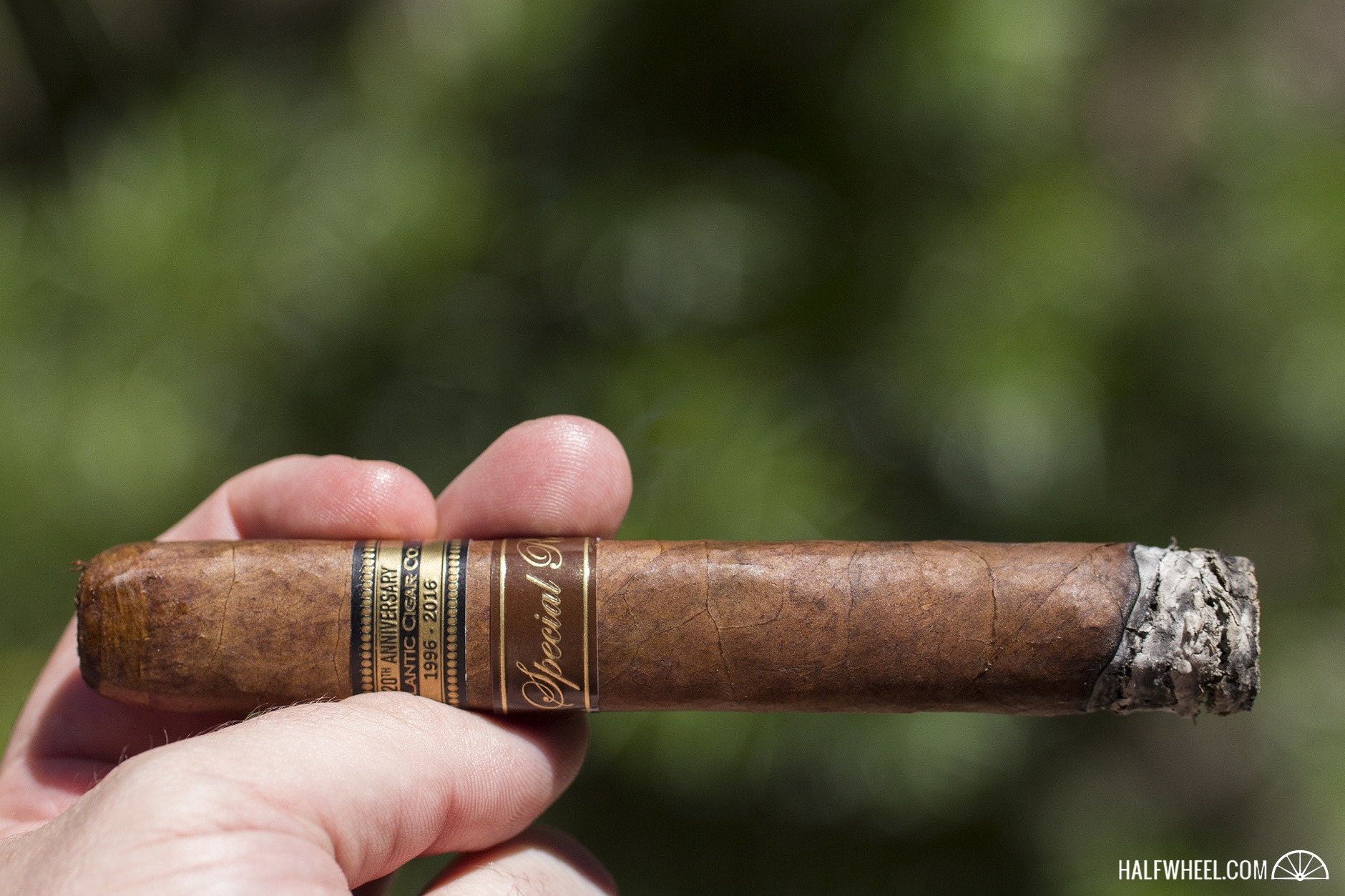 By the start of the second third, the Oliva Atlantic Cigar 20th Aniversario Toro has settled into a comfortable profile that is flavorful if not bright, almost a stew of some of the cake donut from the early goings, touches of earth and a fluctuating pepper note that provides the seasoning. As the ash approaches the midway point, the flavor profiles seems to have achieved its target, rich with flavors that will be familiar to regular smokers of the Oliva Serie V and Serie V Melanio. While the cigar isn’t sweet, there are some trace notes of the apricot notes, though they seem a bit grilled and with a smoky spin. The tail end of the second third sees the pepper ramp up a bit, almost a bit too much, as the cigar now is gruff and pointed, imparting a bit of irritation on the back of the throat. Additionally, the smoke becomes more of a irritant on the eyes. 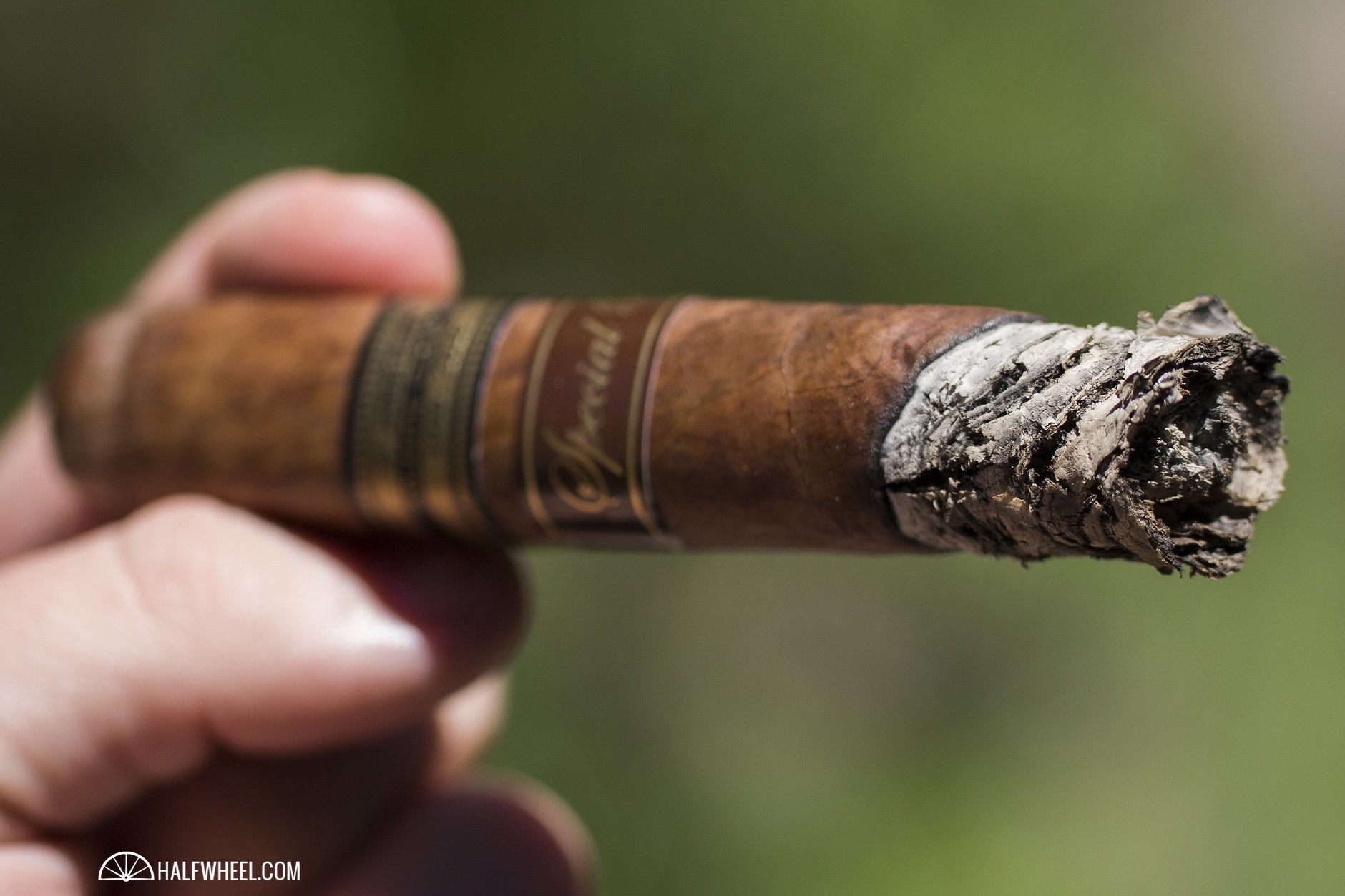 The Oliva Atlantic Cigar 20th Aniversario Toro is certainly a good bit fuller and more aggressive than it was to start, though at the start of the final third it is still quite palatable and hasn’t undergone many changes in terms of the core flavors. The cake donut has steadily faded away, yielding to a rockier earth note to create the base which is quite noticeable on the front of the half of the tongue. In the final two inches, the cigar gets a bit too harsh for my liking, as a sharp tree wood flavor gets involved and while acceptable flavor wise, assuming the taste and physical sensation can be separated. The cigar finishes a bit rough, as now the pepper comes across as either young or harsh—possibly both—leaving its claw marks in the back of my throat. To its credit, the cigar continues to generally burn well until the final puffs when the burn line gets a bit askew. 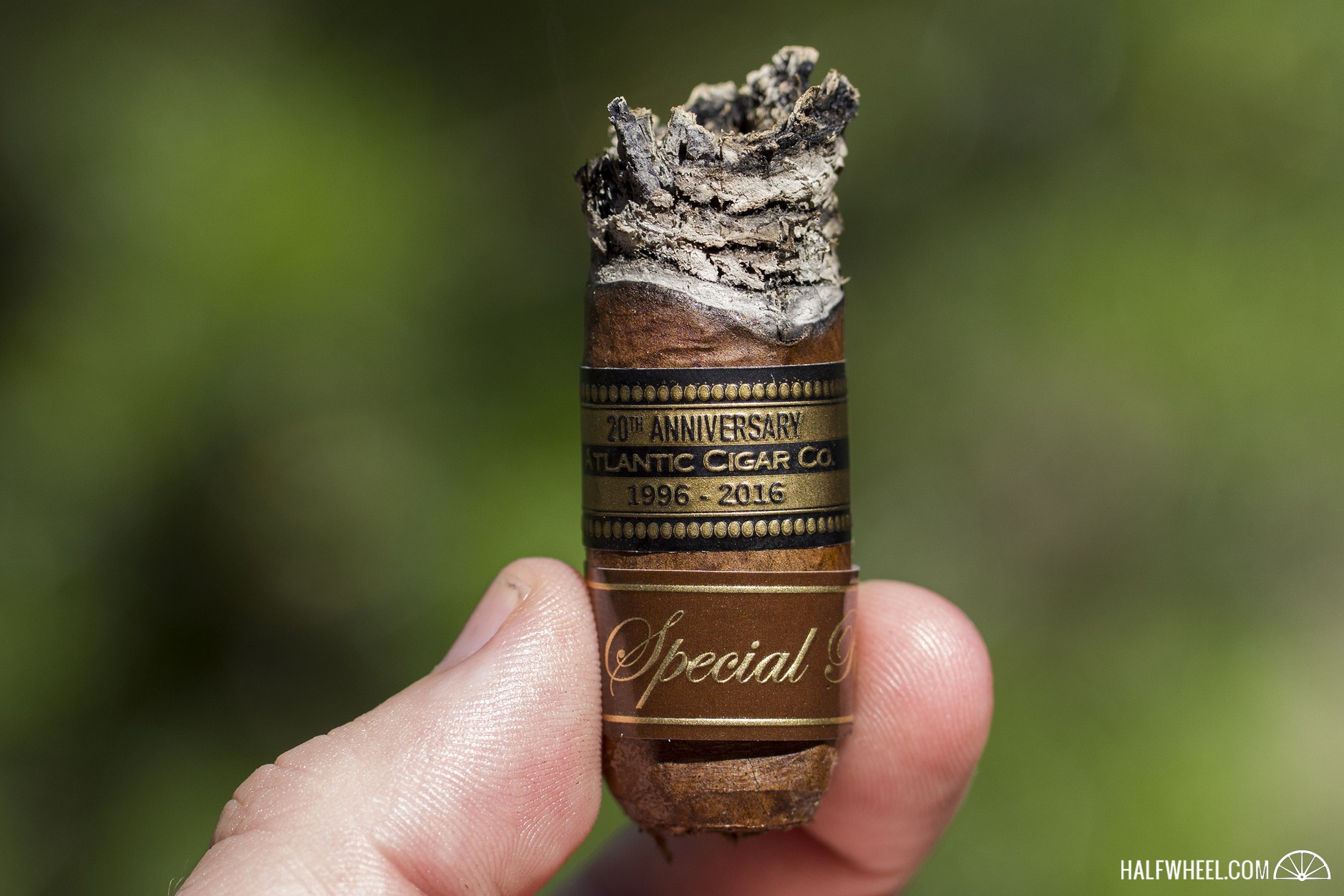 The temptation to compare this to an off-the-shelf Oliva Serie V Melanio is certainly present, but the Oliva Atlantic Cigar 20th Aniversario Toro is a pretty good cigar its own. Like many cigars I've been smoking lately, the second half struggles both in flavor and combustion compared to its first half, though the overall profile is quite good. After gradual transitions in the first half, the cigar kicks it into a different gear in the second half, and once the blend smooths out the rougher spots and the transition is more seamless, the real fireworks of this celebratory cigar will be set off.