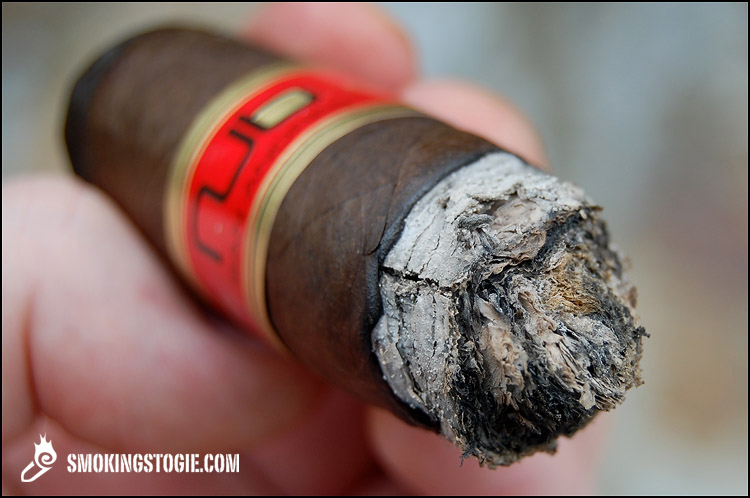 Today we will be taking a look at a special Studio Tobac cigar, the NUb San Andres Maduro. At the moment there are absolutely no plans to release this cigar officially so right now the only way you can get your hands on one is to attend a Studio Tobac event and get your hands on a Studio Tobac sampler. I must say it is one of the nicest samplers I have seen in a while. It comes in a beautiful black cedar lined case and contains six cigars, five of which are completely unreleased cigars exclusive to the sampler. While I am not a huge NUb person to begin with I will say that this cigar looks great. It has a very sturdy, solid look to it. The San Andres Wrapper is quite dark and oily with minimal veins and a really tight pack. The cigar feels smooth in the hand and is virtually seamless. Definitely a well constructed cigar.

The pre-light aroma is very sweet, lots of tobacco smell with hints of cedar, leather and chocolate. The pre-light draw is mild with a fresh tobacco taste as well as some wood and hay.

Starting off in the First Third I am a bit taken back by its mildness. It starts off very mild with little to no pepper or spice. The flavors are quite nice though with a nice sweet creamy tobacco profile, there are notes of wood and leather. Halfway into the first third the cigar picks up a bit and gets a little more spicy and peppery and with it come a touch of coffee and dark chocolate. The finish is short and clean and the smoke production is very light giving it an airy feel which results in more of a mild to medium body. Coming into the Second Third the cigars changes slightly with the creaminess fading, the profile is still mainly woody with roasted coffee bean, leather and dark chocolate. Still very little spice and pepper with virtually no spice tingle on the retro hale at all. The cigar is medium body at this point and the smoke production is still very limited. The draw and the burn are perfect however I am just not getting a ton of smoke out of it. Finish becomes a touch longer with wood and leather lingering on the palate.

Finishing up in the Final Third the cigar doesn’t offer a whole lot more than the last third. Profile is steady and enjoyable but is definitely leaving me wanting more. The flavors are steady but lacking in complexity and the smoke output is bothersome. The Bottom Line: This is one of those cigars that should probably be released because there will be people out there that will definitely enjoy it, but for me (or any full bodied smoker) you are going to be left wanting a lot more out of it. I think if they could somehow beef up the blend and create a more full bodied cigar it would be a lot better. The San Andres wrapper was enjoyable, you could taste the wonderful creaminess in it, but you could tell that the blend was just very mellow and light, and I just don’t think it was the right blend to showcase the said wrapper. Overall a decent enough cigar just nothing unique or special to make me reach for it.