Even the end of the world is subject to delays.

Fred Rewey’s most recent addition to his Nomad Cigar Co. portfolio, Fin de los Mundos, gets its name from the Spanish translation of the phrase end of the worlds, though is a nod to the U.S. Food & Drug Administration (FDA) and what some think the agency’s regulation of the premium cigar might just bring about.

It was first seen back in 2016 at the IPCPR Convention & Trade Show and was scheduled to launch that month. However, delays would push that back for well over a year; along the way to its release, it appeared close to being ready in May 2017 as the Rewey announced pre-orders would soon start, then it was announced it would ship after the 2017 IPCPR Convention and Trade Show, where it was on display with an October release planned. That became early November, and then it was announced that it would finally get its official release on Dec. 2, 2017, with a launch event held at Underground Cigar Shop in Fort Worth, Texas.

The Nomad Fin de los Mundos uses a Pennsylvania broadleaf wrapper, Nicaraguan habano binder, and fillers from Nicaragua, the Dominican Republic, and Pennsylvania, with Rewey saying this is the strongest blend he has offered.

Production is handled by Fabrica Oveja Negra in Estelí, Nicaragua. Size-wise the Fin de los Mundos Robusto looks fairly standard, a 5 x 50 parejo with a good roll and cap. The wrapper leaf is a dark, matte brown that can have some sizable veins and just enough color variance to make the seams fairly easy to spot. Texture-wise it’s dry but offers a fine velvet feel in the fingers, and while I don’t see much tooth, looking at it in the sunlight shows some very fine crystallization forming on the wrapper. It’s a firm cigar with no obvious soft spots, though I swear I see some bumps and dips when I pull the first sample from its cellophane. The aroma off the foot of the first and third samples smell a bit of cardboard at the outset, though I feel like that’s a negative term that doesn’t apply here as the smell is pleasant and neutral with no pepper or spice. The second sample is much richer, with a bit of sipping chocolate at the front and a thin soy sauce note on the backend. The cold draw on the first sample is a bit on the loose side, with the flavors here again failing to jump out and grab a descriptor; I get a bit of the cardboard-like flavor that leads me to note of wheat bread. The second and third samples differ here as well, as the draw is near ideal and if anything a tick firm, while the flavors mimic the chocolate I picked up the through the nose.

For a cigar with a slightly less than engaging pre-light aroma and cold draw, the Nomad Fin de los Mundos Robusto gets underway with a medium-bodied profile that is quite familiar and enjoyable, as it has notes of coffee, leather, a bit of grilled chicken, and some pepper, the latter of which is particularly prevalent on the first retrohale. I’ve never been one to ask when a cigar that promises to be strong will actually get strong, though I can’t help but keep the question in my mind given Rewey’s comments about it being the strongest cigar in his portfolio. The first clump of ash comes crashing down on my lap about an inch in, an unceremonious departure to say the least, with an interesting ring of the binder and/or filler still hanging on and creating a bit of a cone shape back to the burning center. While smoke production has been good so far, it seems to increase just a bit with a relatively clean foot now, with the aroma from the cigar having a bit of cool chalk to complement the pepper. Retrohales remain the more potent way to experience the Fin de los Mundos’ peppery strength, with the flavor at medium-plus on my palate. The burn has largely been good with no major issues arising. 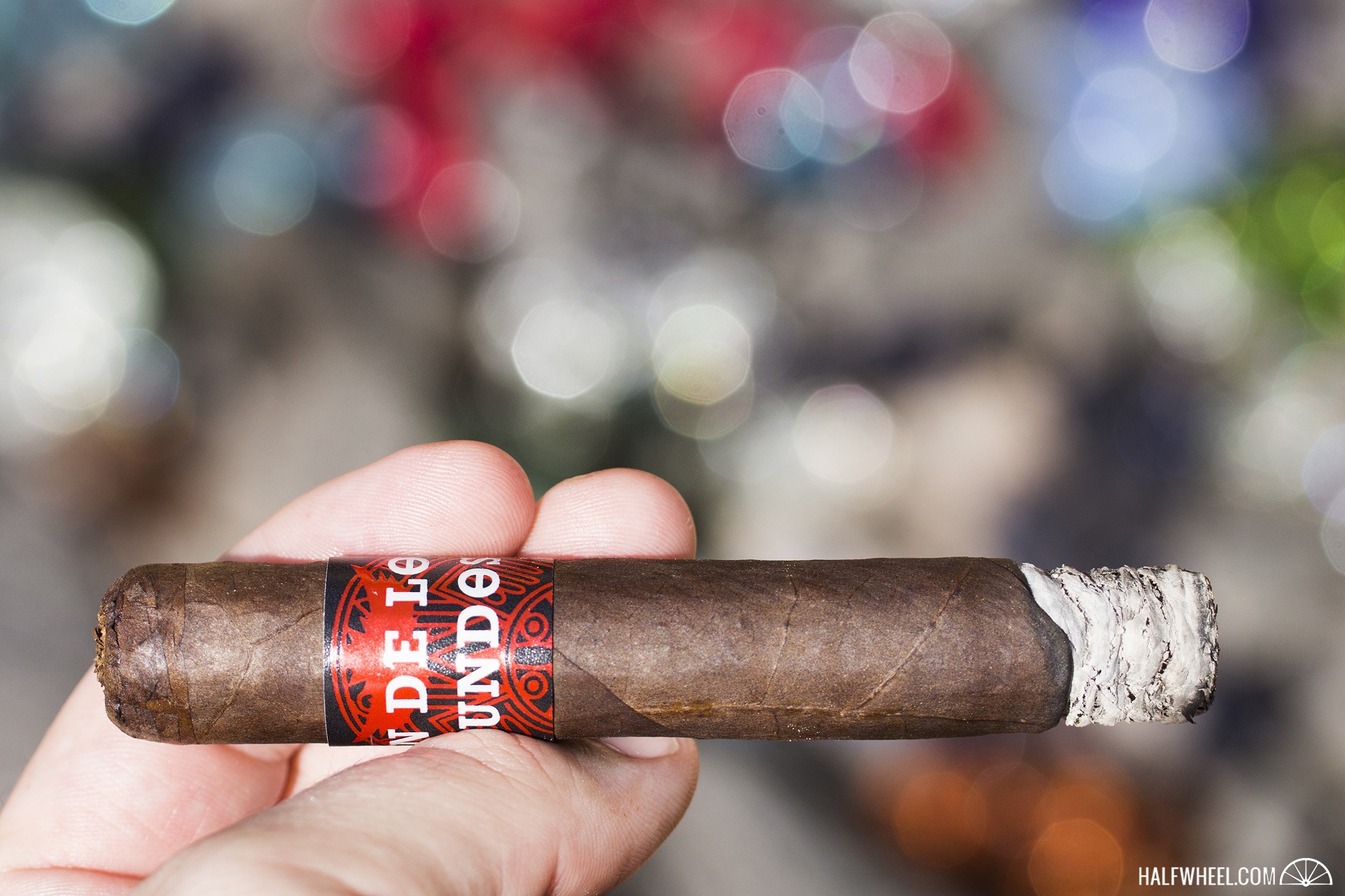 The second third of the Fin de los Mundos sees the body of the smoke thin out just a bit, and while there’s still pepper and a bit of chalk to be found, a lot of the other flavors have faded well into the background. The draw also seems to have opened up a bit. I wouldn’t go so far as to knock a point off—at least, not yet—it’s got my attention as something to monitor. Through the midpoint the slightly sweet earthiness of the Pennsylvania tobacco starts to emerge, a flavor I will gladly dive headfirst into and take in spades, yet I still don’t find the cigar packing a ton of strength despite the pepper remaining quite prevalent through the nose. The flavors don’t shift too much through the second third, staying a bit to the mild side of medium in both flavor and strength, though I could easily see someone putting them at medium-plus based on their tolerance. There’s a bit of tangy wood that comes out from time to time, with those intervals shortening as the burn line approaches the final third. There’s a fairly quick jump in the wood note as it gets much more pronounced and prevalent in the profile; while pepper isn’t as much a part of things now, there are some similarities in terms of the mouthfeel. I’m weary to say the next flavors get earthy, but there are certain undertones developing that lean that way, though the sweetness that was found in the previous section appears to have been left behind, with the resulting flavor much drier. There’s a bit more pepper showing through, which helps nudge the cigar’s profile into a bit more complexity, and the cigar is quick to show it’s far from done. There’s a bit of flour and vanilla, followed by some toasty notes and a shift in the pepper to a much drier, mouth-drying presentation. The cigar closes out on a dry note that has a bit of sour bite for the tip of the tongue, with a medium-plus flavor profile and at a medium strength level. Back-to-back reviews of cigars heralded as their company's strongest is not generally my idea of a good time, though I've certainly appreciated the experience I've had with Nomad's Fin de los Mundos. Despite billing the cigar on its strength, Fred Rewey's creation did some of its best work in the balance department, never letting the profile get too strong or too far from being enjoyable. I'd love more of the sweetness from the Pennsylvania tobacco, as it's not only quite good but really made the biggest impression on my palate, and the presence of the earthiness without the sweetness just didn't scratch the itch I had for it. Even with FDA regulation of cigars, thankfully it's not the end of the world, which means there will be more time to smoke a few more Fin de los Mundos.