The 2019 version of the Puro Sabor festival has been postponed due to the civil unrest in Nicaragua.

In a carefully-worded statement, one that does not mention the violence, the Cámara Nicaragüense de Tabacaleros—the Nicaraguan Chamber of Tobacco—announced that it would postpone the 8th Puro Sabor, which was expected to be held in January. Instead, the group says it will hold an event on Jan. 26, 2019 in Miami.

The reason is the civil unrest that has struck the country since April, leaving over 300 people dead. 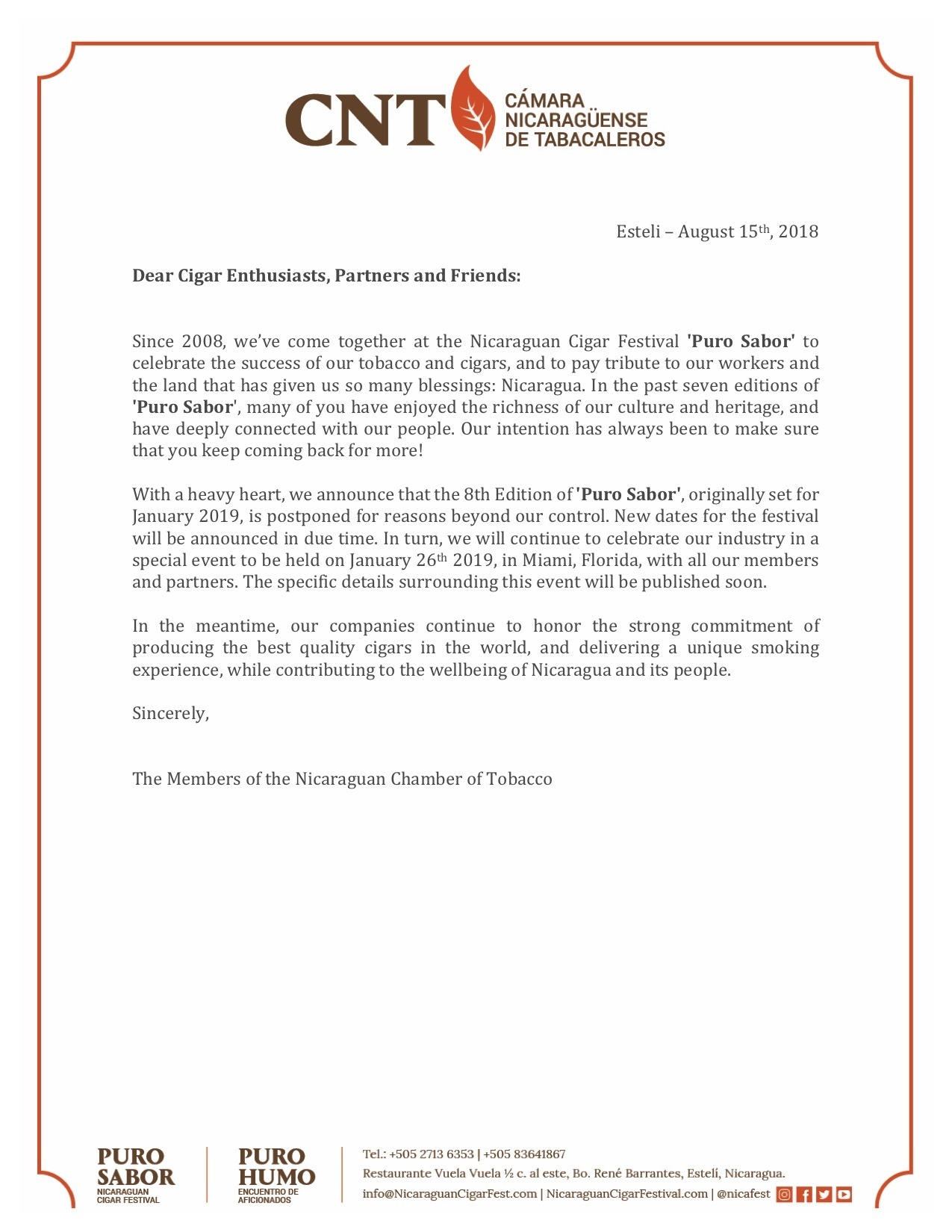 In April, Nicaragua’s president, Daniel Ortega, announced that the country would revamp its pension system, including cutting payouts to citizens by 5 percent. The announcement sparked protests in the country. Ortega announced he would abandon the pension modifications, but by that point, as many as 30 people had died in clashes between protesters and counterprotesters and allegedly government forces.

By June, the violence and other effects had spread across the country and had begun to directly impact Nicaragua’s cigar production. Roadblocks were established throughout the country by protestors, which created difficulties in shipping tobacco and cigars, particularly out through Managua. Later that month, most cigar factories participated in a 24-hour strike, a move that was made to force Ortega back to the negotiation table.

In recent months, Ortega has refused to negotiate with protestors or hold early elections. While the increase in deaths has slowed and the roadblocks have disappeared, the violence remains. Reports of pro-Ortega paramilitaries attacking citizens are still a daily occurrence in Nicaragua.

Ortega has also refused to allow the Organization of American States (OAS) into Nicaragua to investigate human rights abuses.

The Nicaraguan Cigar Festival began in 2010 and had a larger event the following year. It was canceled for 2012-2013 due to a variety of reasons unrelated to civil unrest but returned in 2014, branded as Puro Sabor. That event was very much a test to determine if the country and its tobacco chamber could host a festival that met their expectations.

Since then the festival has expanded dramatically.

Hundreds of international guests have attended the last few Puro Sabor festival, which have included stops in the colonial city of Granada. From there, the event moves north to Estelí, the home of Nicaragua’s cigar industry. It’s impossible to miss the festival when it’s town: banners are set up throughout the city, large buses travel Estelí’s small streets and effectively every hotel room in the city is booked, the only time of the year that happens.

Like similar festivals in Cuba and the Dominican Republic, Puro Sabor allows consumers to visit fields and factories of various cigar companies, experience local Nicaraguan cuisine and art, and of course, try a plethora of the country’s cigars.

The violence in Nicaragua has eroded the country’s tourism industry, including cigar tourism.

Puro Sabor 2019 is effectively canceled. Drew Estate’s popular Cigar Safari has been on hiatus ever since the violence begun and the company has not announced any future dates. It’s unclear whether other companies such as My Father or Perdomo will resume their tour programs in the winter.

While many people in the cigar industry have traveled to Nicaragua since the violence has started, the number and frequency have reduced. Currently, the U.S. State Department lists Nicaragua as a Level 3 (of 4) country, advising potential travelers to reconsider the travel.