Multiple retailers have confirmed to halfwheel they have received invoices for Viaje’s next shipment which includes Exclusivo Super Lance and White Label Project and Zombie versions of Super Shot. Historically, Viaje’s issuing of invoices means the products have begun shipping. We broke the news on Super Lance last year when Andre Farkas was attending events for the 2012 release of Zombie. The cigar is the twelfth release in the Exclusivo series, although only the tenth vitola. The 7 1/2 x 46 combines the length of a Lancero with the width of a Corona Gorda. Pricing is set at $10.80 per cigar or $270.00 per box of 25. Viaje has not returned comment about the size of the release, although the company posted the above picture to its Facebook page earlier this week. Viaje adds its tenth edition of White Label Project in the form of WLP Super Shot. It’s a cigar that was actually made last year, but not rolled to the correct dimensions. Pricing is set at $160.00 per bundle of 25, or $6.40 per cigar—the same price as the Super Shot 12 Gauge for which its based on. The company posted the above photo and below message to its Facebook page earlier this week:

WLP Super Shot backstory – Super Shot debuted early last year, but the release had a snag. 12 Gauge was initially rolled incorrectly. The cigar arrived at 3.5″ which was .25″ too long. The cigar was re rolled to the correct specs and released. 300 bundles of the 12 Gauge 3.5″ version were put to rest in our aging room and have remained there for a year and a half…………until now. 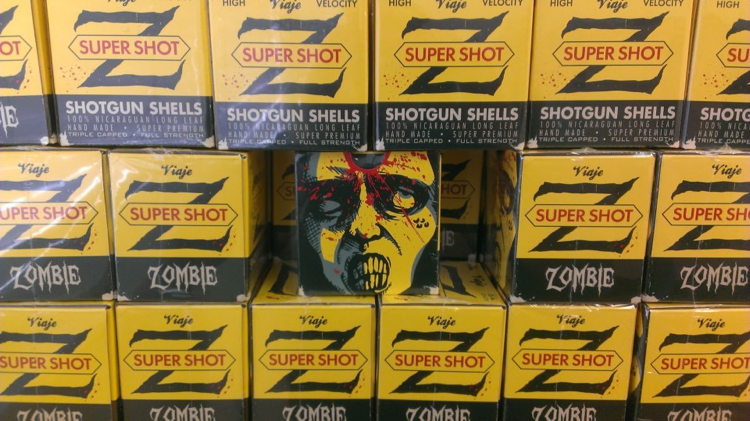 Last week, the company announced Zombie Super Shot. It’s a 3 1/2 x 54 release that is supposed to combine the company’s Super Shot and Zombie releases. Pricing is set at $7.00 per cigar or $175.00 per boxes of 25 cigars. The company has not disclosed production numbers.