On Tuesday, Viaje announced the four retailers who will be getting the 2013 edition of the Viaje Zombie, an annual release that has been limited to just a small handful of stores since being introduced in 2011. The announcement was made via the company’s Facebook page.

The 2013 edition of the Zombie comes in two blends and packaging formats, the standard black box and a new, natural colored box. Both boxes will come with 20 cigars and retail for $220, making the per stick price $11, and each box will have what the company describes as a “Zombie collectible.” All that has been said by Viaje is that “black box has 1 of 2, natural box has 2 of 2.”

Each retailer is receiving 50 boxes of one blend; none of the four retailers are receiving both blends. Neither of the blends have been disclosed at this point, though it has been announced that the cigar is a 5 x 52 Robusto with a tapered, unfinished foot, a new size for the project as it had previously been a 4 5/8 x 52 Robusto. Also confirmed is that the black box blend is the same as previous years, while the cigar in the natural colored box is a second blend that was selected for the Zombie project but hasn’t been used up to this point. All that is known about the original blend is that is a Nicaraguan puro.

Getting the natural colored box are Ambassador Fine Cigars in Scottsdale, Ariz. and Crescent City Cigars in New Orleans, La. The Pipe & Pint in Greensboro, N.C.and Casa de Montecristo in Countryside, Ill. are receiving the black box. The Pipe & Pint will be hosting a release party with Farkas on Saturday, May 18.

Viaje posted this picture of both boxes on their Facebook page: 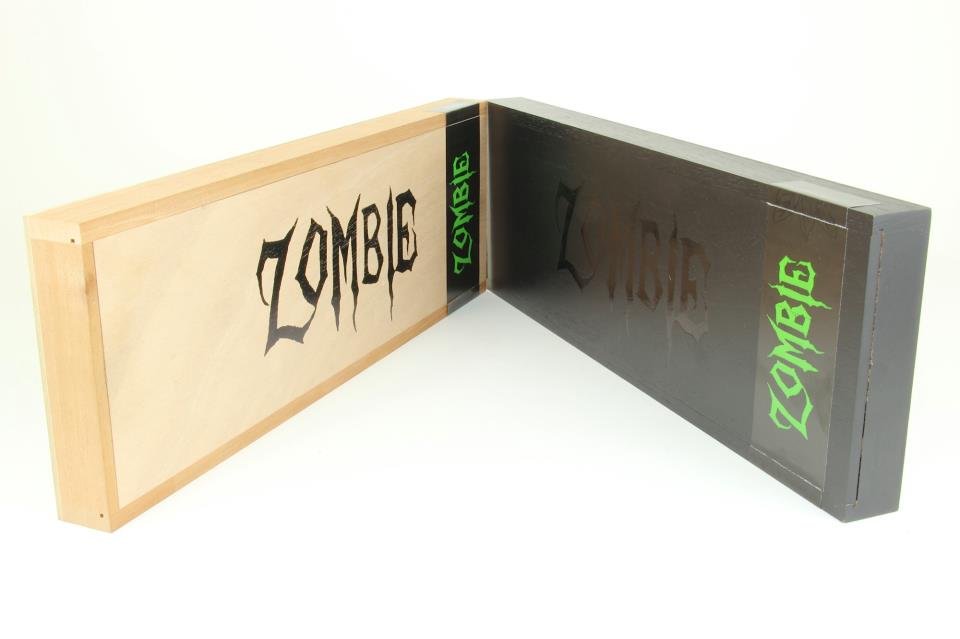 The Viaje Zombie first appeared in 2011 as a two-store release, going to Tobacco Grove in Maple Grove, Minn., then to BURN Premium in Burnsville, Minn. In 2012, a third retailer was added, as Tower Pipe & Cigars in Sacramento, Anthony’s Cigar Emporium in Tucson and The Humidor Cigar and Lounge in Wichita were selected as retailers. In both years, each retailer received 50 boxes of the cigar. The addition of the fourth retailer this year brings the total production to 4,000 cigars, though split evenly at 2,000 cigars per blend.

Viaje recently announced the release of the Zombie Super Shot, a 3 1/2 x 54 ring gauge vitola that will be packed in 25-count boxes that is supposed to combine the company’s Super Shot and Zombie releases. That cigar began shipping in early May along with the Exclusivo Super Lance and White Label Project Super Shot.

The 2012 Viaje Zombie was reviewed here, while the 2011 review can be found here with a redux here.